In the late 1970s, when my first husband was in the Air Force and we were living in Germany, a sweet memory was made. It’s a good thing too, because my time in Germany ended up being the setting for some of my worst memories, but even so I loved that country and the people I met, and I look back on my years there with such wistful fondness.

We lived in a little German village called Damflos, not terribly far from the Luxemburg border. Our very good friends Dave and Diane also had orders to Germany, and had moved there a few months before us. They lived about an hour east of us, and at least one or two weekends a month we would drive our Volkswagen Rabbit to their place at Vogelweh, or they would drive their Volkswagen Beetle to ours in Damflos.

Diane and I became friends in Northern California after meeting in a Lamaze childbirth class. My daughter Sharon was born in May, and Diane’s son David was born in June. Later while we lived those few years in Germany, Baby David and Baby Sharon were great buddies, and watching their interactions and hearing their toddler conversations was always more interesting than almost anything else. Both tykes were quite bright and talked early and articulately.

One Saturday Dave and Diane came to visit us in Damflos, and Diane and I decided to drive to a nearby Air Base to shop in the BX (stands for Base Exchange/department store). Among other things, Baby David and Baby Sharon (who were around 20 months old at the time) needed new shoes. I can’t remember what else Diane and I purchased that day, but we put the new shoes on David and Sharon’s feet, secured them into their car seats, and headed home.

Pretty soon we could hear our two little ones having a very serious conversation with each other in the backseat, and it centered on their new shoes. I wish I could somehow convey their lilting, sing-songy, yet matter-of-fact voices. David and Sharon were sticking out their little legs so they could lean forward in their seats and just barely get glimpses of the new shoes on their feet. They were turning their feet this way and that, so that they could be admired from every possible angle.

Sharon looked at her friend beside her and said slowly, “Baby David, how do you like your new shoes? Are they cump-ter-bull?”

And David answered in a very mature way for a boy who was not yet two, “Oh yes, Baby Sharon. My shoes are very cump-ter-bull. Are your new shoes cump-ter-bull too?”

“Yes, Baby David, they are very cump-ter-bull,” Sharon replied, and Diane and I looked at each other as we were hurtling along the German Autobahn at 80 miles per hour (which was terribly slow for the Germans, but as fast as we dared to go, if I’m remembering correctly) and we laughed in delight. And we made a memory that we’ve revisited many times these past 34 years. And even though Sharon and David are now closer to age 40 than they are 30, when Diane and I reminisce about those years together, we still call them Baby David and Baby Sharon.

Yes. They both just love that.

So my dear friend Diane came to visit us in Minnesota this last Christmas. I hadn’t seen her in a couple of years and it was wonderful to be together again. The night before Christmas she asked me to sit down on the couch so she could present a gift to me, and when I unwrapped this good-sized canvas she had painted herself, I burst into tears: 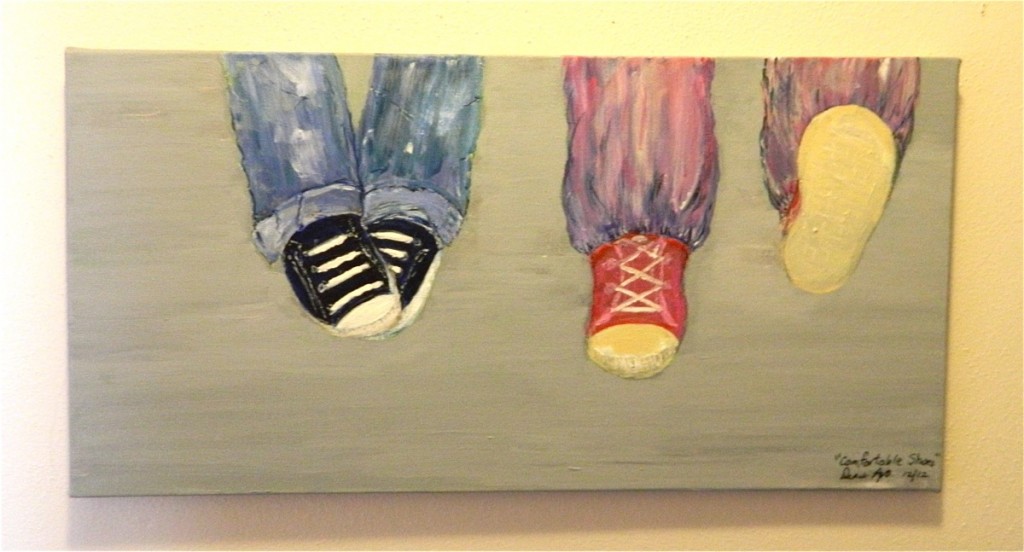 If you click to enlarge the photo, you might be able to see what Diane titled her wonderful painting: “Comfortable Shoes.” She remembered exactly how our two little children were flexing their ankles in different directions so they could properly appreciate their new shoes.

So many memories came flooding back…we’ve all been through a little heartbreak since 1978.

This beloved painting by Diane hangs in our home now, a testament to friendship, to our children and to comfortable shoes.