And in eyebrow news….

I thought I’d pop in here today to share something a bit different. I’m getting ready to go out to dinner and a play at our community playhouse with a former neighbor of mine, but here’s a little something about eyebrows.

I have been noticing hubcaps and eyebrows since I was a little girl. Hubcaps probably don’t impact a person’s life very much, but eyebrows make a huge difference in the way a person looks, I think. As I’ve gotten older (in my 60s now), I’ve noticed that many women my age and older have some eyebrow issues.

I actually started to see some sparseness in my eyebrows when I was in my 50s, and did what most women do I guess…used an eyebrow pencil. The problem with this for me was that my natural brows are fairly flat and don’t have a very pronounced arch, so penciling in an arch was always a little outside my natural browline.

Couple sparse eyebrows with worsening vision that makes it next to impossible to see if you’re doing a decent job, and all of a sudden you’re an older woman who looks like this. Or this.

So after a lot of research and consideration, I decided to go to the only business in our town who specializes in microblading eyebrows. I didn’t want my eyebrows tattooed, because I didn’t want to make that commitment, plus I know two people who’ve done it, and their brows faded terribly. If you’re not familiar with microblading, click here and look at these before and after pictures! The trained, licensed technician measures your face and bone structure carefully and shows you the shape they will/could be, and then creates tiny semi-permanent hairstrokes over your own eyebrows that make it hard to tell they’re not really all your own.

So here’s a picture I took with my iPhone the day I had it done, so I could text my three daughters who were anxious to see the results. 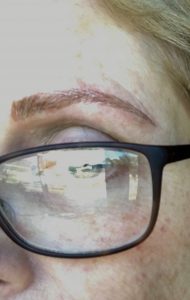 The “hairs” toward the outside of my eye are not hairs at all, but tiny microbladed pigment lines that will last for about a year.

I don’t have to squint and haphazardly draw on my eyebrows anymore.

I would really recommend this to women who have thinning eyebrow issues. My daughter knows someone who lost her brows from cancer treatment, and decided to have microblading done. Her stunning results helped me decide to take the leap.

I realize with all that’s going on in the world this seems like such a vain and lightweight thing. I’m sorry if this rubs anyone the wrong way.

My mother-in-law used to say she felt naked if she went out of the house without her eyebrows drawn on. I don’t think I was quite to that point, but it is very nice to not have to think about eyebrows at all. Not that hubcaps or eyebrows have been given that much real estate in my brain, but you know what I mean….