One winter afternoon my seven year-old granddaughter went missing, and for the first time in my life I knew what genuine terror felt like.

It was in early 2014, and I was sitting in the living room with Michael as I always did, once we’d reached the point in his illness (Parkinson’s with Lewy Body Dementia) where I couldn’t leave him alone anymore for more than a minute or two. I was keeping him company as he watched Bonanza on TV. My thoughts had turned again toward how I was going to make dinner and keep him from getting up on his own and hurting himself, how could I once again try to explain to him and actually have him understand, that I’d just be in the next room and would be back with him soon.

The phone rang and it was my son-in-law Chris, asking if seven year-old Margaret had come over to my house after school. She had not. Adrenaline shot through me, and in two seconds my mind leaped to this sickening conclusion: Margaret didn’t make it home after school, some evil man had taken her and they were already on their way out of state, we would never see her again, and darkness and despair would engulf and paralyze our family, and we’d never claw our way out of it. The fear that gripped me felt truly hellish.

I quickly moved to help Michael downstairs into the basement, then out to the attached garage and into the car. We raced over to Chris and Sharon’s neighborhood, where several friends were already going door to door asking about a pretty little dark-haired girl in a khaki school uniform and a pink coat. The police were called. A photograph of Margaret was given. A white van with no windows that had been seen exiting the alley around the time Margaret normally got off the bus was reported.

We tried to reach Sharon, my oldest daughter and Margaret’s mom, but her phone was off because she was busy with a photography session at her work studio. In minutes three police cars rolled up, and Chris and Sharon’s house was searched. Chris could tell he was under suspicion, because those closest to a child always are. After the police searched the house once, they asked for permission to search the entire property again, looking deeper and more carefully this time — in the basement behind the furnace, in the attic crawl space, in the garage rafters, under the tarp in the back of the truck.

Margaret knew the rules, that she could never under any circumstances talk to a stranger, or allow them to get close if she could help it. She was an obedient, bright and lively little girl. We all knew she would never have willingly gone with someone. I couldn’t help thinking about how we are the products of a society with Elizabeth Smarts and Jacob Wetterlings and media reporting that never lets up, so we choose the lesser of two evils and instill an unnatural fear in our little ones rather than risk losing them forever to sick perverts.

Had I ever prayed before this day? Had any of my years of seemingly earnest prayers since learning about God’s love and power in my three year-old Sunday School ever really been as true and desperate as this? As Michael and I drove around with our windows open in the bitter cold, the car heat and radio off so we could hear any little cry, I whispered under my breath a thousand times, please God, please God, please God, with every pound of my heart.

Up and down the streets we drove, looking left and right, stopping every single person we saw and asking if they’d seen a pretty little girl with dark hair, a khaki school uniform and pink coat? No one had. As I drove east on Superior Street I saw a squad car one street down, driving slowly, looking for my flesh and blood whom I wasn’t sure got a hug and kiss from me the last time I’d seen her.

By this time Sharon had been reached and she had joined in the search. How she was not screaming, I didn’t know. A quiet, fierce determination was on her face as she drove and looked and drove and looked, urgently leaning forward over the steering wheel.

Margaret’s friends’ families were called. No one had seen her. The bus company was called, the bus checked to no avail, and prayer chains activated in California, Minnesota, Wisconsin and Tennessee.

When the sun began to set, Margaret had been gone for over two hours. I had to stop searching and go home to begin dinner and evening cares for my two foster women with disabilities. I wanted to tear my skin off my body with the cruel incongruity of needing to go home to make salad and spaghetti for our fosters and help my husband go to the bathroom while my beloved granddaughter had vanished.

I knew that if the next day came and she was still gone, I would never again be able to do normal things.

After I filled a pot with water and set it on the stove to boil, I went to our bedroom. I vividly remember laying across our bed, putting my face into our sheets and wailing out my prayers to God. I didn’t care if the neighbors heard, and I knew our fosters would be sitting in their rooms wondering what had happened to their foster mom, but that didn’t deter me from sobbing. While my ailing husband sat helplessly in a bedroom chair, quietly distressed and unable to speak well, I howled out my plea to God. PLEEASE! Bring her back! God! You know where she is! I paced, I sobbed, I slashed the air with my hands as I prayed. I got back down on my knees again and pleaded, “Michael, pray with me!” and he bowed his head and whispered the most urgent, “Help us Jesus!” prayers his frozen body and fading mind would allow.

Somehow I served dinner. As the winter sun went down and the outside temperature dropped, my body slowed from exhaustion, but my mind was still under siege: I felt like I was close to losing my grip on sanity. I couldn’t allow my thoughts to wander to what might be happening with Margaret.

I kept crying and praying, begging God to give me another chance to show my love to my precious granddaughter. I couldn’t even bring myself to ponder what her parents were going through as they searched the streets and empty lots, and went door to door for hours. 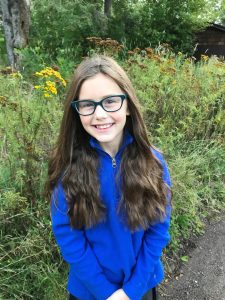 When the phone rang and I heard Sharon’s elated, “They found her!” I sank to the floor and sobbed in relief and joy. Margaret had gotten off the bus and accepted the invitation of a new little girl in her class to come over and play. She had called out this information to her sister Eleanor and assumed she had heard.

A police officer who’d been searching for two hours spied a little girl with a pink coat bouncing up a neighborhood street on her way home after a nice time at her new friend’s house. Margaret was alarmed when he stopped her and asked her name, then insisted she get in the car with him so he could take her home.

My own grandmother never hid the fact that she was, at best, ho-hum about having me for her granddaughter. She never really showed me much love or interest. As each of my ten grandchildren have entered the world and gloriously turned our hearts and lives upside down, I’ve wanted to be different, and make certain they know how much I treasure them.

I don’t think I’ll ever be the same after Margaret came back to us on that historic day. That experience simultaneously freed and imprisoned me.

To the frustration of all my grandchildren, when they ask to leave my yard, perhaps to skateboard down the sidewalk, or ride their bikes on the nearby Lakewalk, unless I’m with them the answer is always no.

But to their reluctant grins and and I hope their delight, they never leave my presence without kisses and hugs, words of encouragement, games of Farkle, and a thousand or so I love yous.