Support for the Sojourn

Twenty minutes after nine. She makes sure the front door is locked, takes her black wool pea coat from the hook in the entry and puts it on, slips her feet into the black suede oxfords with a retro wing-tip design, drops her iPhone into the middle pocket of her sizeable Vera Bradley purse, and heads to the garage. She starts the Outback, pushes the Robin Mark CD into the player, and backs out of the garage and over the berm of snow at the end of her driveway, piled there by the snow plow last week. The streets are wet, not icy, which means it’s already in the mid-thirties. Unusual for February, and not a good sign for the planet they say on the news, but it makes her feel hopeful and glad. The worst of winter has passed. Even if March brings blizzard after swirling blizzard, piles of snow never seem as sinister as temperatures that plummet to twenty-seven below.

She drives the few miles to the hospital and sings with the Irishman,

“Lord Jesus may Your Spirit come
And make this a holy place
For we have longed to gaze
Upon the glory of Your face.
Then every selfish will exposed,
And every vain desire
Are humbled and then purified,
By Your holy, holy fire,”

and it makes her think for the billionth time about her Michael, now moved on to the place and the Person of whom she sings.

She turns into the parking ramp across the street from the hospital, reaches out of the car window to press the blue button and take the ticket that pokes out, then drives to level P3, where she parks in the “Compacts Only” area near the new elevators that will take her up to the skywalk. 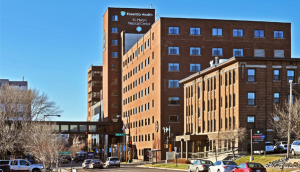 She steps out of the elevator and passes medical personnel in periwinkle blue scrubs, professionals in work dress who nod, and people walking through the enclosed and windowed sidewalk, three stories up. She looks down on the street below and wonders how many of those cars hold people with pounding hearts and red eyes, hoping today will bring better news of their loved ones in the huge brick building.

Two years ago she was one of those people, doing normal things like driving, parking, walking, breathing, praying, while watching her husband withdraw from this world, preparing to cross over to a timeless land she could not yet enter.

This is why she put on her pea coat and zippered black suede shoes and got in her Subaru to drive downtown, to be with a group of fellow grief-travelers twice a month, where nothing is expected and everything is understood.

She waits for the elevator and hits the button for the second floor, down one from the skywalk. The signs taped to the walls point to the carpeted room next to the chapel where between twelve and sixteen people gather, pouring coffee, hanging coats, giving hugs, settling down into upholstered chairs. A facilitator will begin the meeting, going over guidelines for newcomers (crying is fine, expected, and we will wait for you to get through it or you can pass, this is not a therapy group but a support group and we learn from each other, remember to share your name and the name of your spouse and how he/she died, if you have to leave early feel free to slip out quietly, the bathrooms are down the hall to the left) and at ten o’clock they begin.

She feels glad to see everyone there. Dignified N. with his hearing device that he places on the coffee table, D. with his shock of white hair and shy manner, V. with her knee brace and beautiful empathy, S. with his brotherly love and Christian faith that warms everyone. She sees J. who wears his grief and joy on his face and makes them all laugh and sob, Lovely B., who is furthest on the road they share, hopeful, serene and expectant now, R. who drives from almost-Canada to be there and can’t yet speak without the pain cutting his words short, B., kind and sweet, who made a quilt for V.’s grandbaby, and J., who has lost husband and father, and whose humility and quiet sharing reveal real depth. She sees L. in his chair, man of few words with feelings he either can’t or won’t bring to the surface, M., trying to navigate life with his daughters after the sudden death of his wife, and F. who also remembers the awfulness of Lewy Body Dementia. C. is there for the first time in a while, the oldest member of this senior group, and he deals with his sorrow by sitting with hospice patients who would otherwise die alone.

They know each others’ grief stories. Pancreatic cancer, Parkinson’s, aneurysm and ALS. Death by car accident, by dementia, by stroke, by Agent Orange.

She hadn’t planned on attending any grief support groups, because she thought she had wonderful support already. Family and friends have been so good to her. But V., whose life mirrors her own in countless ways, encouraged her to come, and she has made it a priority for over a year now.

They listen. Pass Kleenex. Welcome the new, tentative folks who wander in with their fogs of sorrow. Heads nod in complete understanding when someone shares. Sometimes a smaller group of them go out for lunch or coffee after the meeting ends, and sentiments are expressed about having friends who truly understand the ways of grief and the scarcity of maps for this journey they were put upon, the emotional ditches they wander into, and how much the new normal hurts.

She eats the rest of her romaine and blue cheese salad while N. finishes his seafood chowder beside her. J. works on the sandwich he picked out thinking it was only a croissant, L. crosses his arms and rests them on the table after crumpling up his napkin, ready to bring some of those few words forward now that the group is smaller, perhaps safer. Across from her, B. is a good listener and offers cheerful encouragement. She’s thinking about selling her house and moving into an apartment. Shoveling snow when one is sixty-nine is getting old. S. says something about how they’re always going to be there for each other, how they’ll keep coming back to this grief group because there are no expectations here about how long they can sorrow, and how they understand each other so well because they’re on the same difficult road.

She wants to believe this is true, but something deep inside tells her it’s probably not. Already one of their group has met a widow at his church and fallen deeply in love. He stopped in at the meeting a few weeks ago, bringing a photo of the two of them smiling and glowing, cheeks pressed together, and wanted to say goodbye to the group he no longer needs.

She knows this will happen again with others, and she knows it will most likely be the men. She thinks that often men need to have someone in their lives to cook for them and take care of them, that perhaps they aren’t as comfortable with aloneness and silence as women are.

After a couple of hours, the lunch/grief group pushes their chairs away from the table and they all pull on their coats. Hugs are exchanged, hats are placed on bald heads, parting words are spoken about anticipating the next meeting in two weeks.

She walks to her car across the parking lot partially covered in melting snow, thankful for the rubber soles on her shoes. She drives the winding roads past the cathedral and looks at the gorgeous, expansive view of the Great Lake that never fails to uplift. The winter sun transforms the lake into an enormous blue field strewn with glittering gems. She lets her mind recall how it felt when her soon-to-be husband brought her here from sardine-packed Southern California almost thirty-six years ago.

She feels grateful for this group of sojourners she sees twice a month, and the comfort and fellowship they offer. She prays for some of them as she hangs up her coat, puts her shoes on the floor tray to catch the snow, revels in the little howls of greeting her dog gives, and opens the French doors overlooking the lake to let her out. She walks to the bird cage and greets Phoebe the parakeet with a ch-ch-ch sound that makes her hop from perch to perch.

She fills the tea-kettle and sets it to boil on the stove. She walks down the hall to the office and turns on the Mac to get some work done before it’s time to cook dinner. Pounded chicken breasts sauteed in butter and lemon, maybe. Asparagus. She wishes she had bought a baguette while she was still out.

Before she returns to the dining room to let her aging and scruffy Schnauzer back in, she checks the big calendar on her red and cream toile-wallpapered office wall, making sure the words “Grief Support Group” are written on the square for Wednesday, two weeks from this day.