Room With A View

I can tell the worst is over. This morning when I woke up right before 5:00 a.m., my throat was no longer flaming. It felt like the Throat Elves had ceased with the blow torches and switched over to just a little harmless sandpaper. I coughed and it didn’t feel like I was attempting to break cement loose in my lungs. My skin didn’t feel feverishly sore. The virus that put me in bed for three days is weakening and whimpering instead of galloping and raging. I’m so thankful to feel a little better!

I’m not a napper (although sometimes I wish I could be), and to have to stay in bed because of illness can be boring. We don’t have a television in our bedroom, on purpose. So for the hours I couldn’t sleep while I was sick (which were basically the hours from 5:30 a.m. until 9:00 p.m. every day), I did the same thing over and over. Read, knitted, listened to soft, soothing music, curled up in a fetal position and counted my blessings, and prayed. None of those were boring at all, it was just the in-between times that were a little ho-hummish.

For three days I looked at the same things in our bedroom. I had the same views. I thought I would share them with you. (Now that I’m feeling better I can tell how sick I really was by the fact that I felt certain that varying views of my bedroom would constitute a fascinating blog post.)

Here’s a view of the nightstand to my left, and all the needed accoutrements for a short illness: 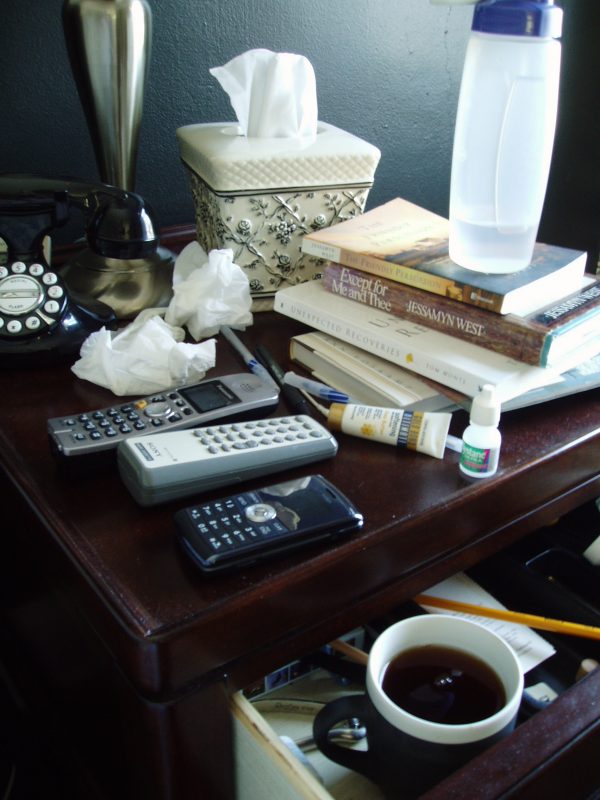 Books to read (two recommended by my friend Jeannie in Australia), one a gift from my friend Ember in England, another book already read and moaned over, ready to absorb again. House telephone handset, because the old-fashioned black phone in our bedroom doesn’t ring. Remote control to the little CD player across the room. Cell phone. Eye drops for chronically dry eyes. Water bottle, probably teeming with replicating flu viruses. A cup of hot Lipton tea, just made in the bathroom with an electric water kettle. Hand lotion. Pens. A Q-tip. And wadded up, used Kleenex. What? You don’t have gross used Kleenex laying around?

Here is a view also to my left, out of the window to the street in front of our house. See the bare trees? The snow left on the ground after last week’s considerable thaw? It’s now below zero again as I type this. Minnesota enjoys playing cruel tricks like that on its trapped devoted residents. 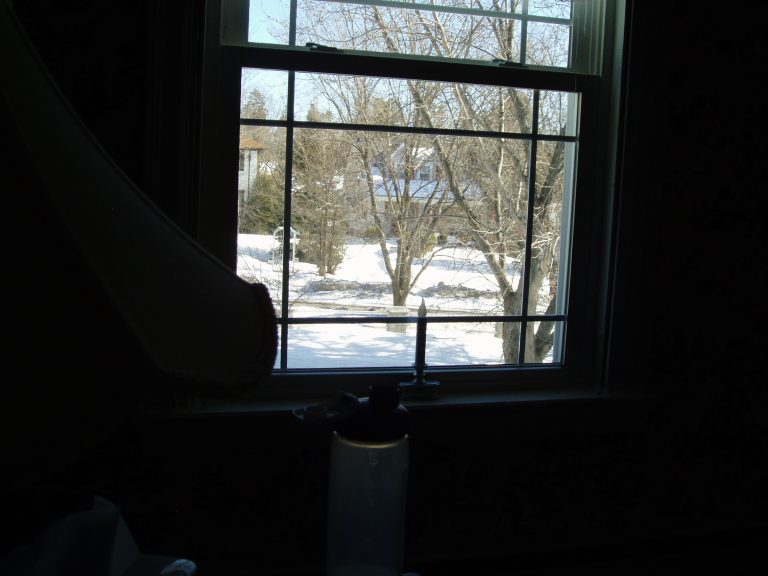 Still looking to the left, but now to the floor, here’s another view of a sick person’s room: 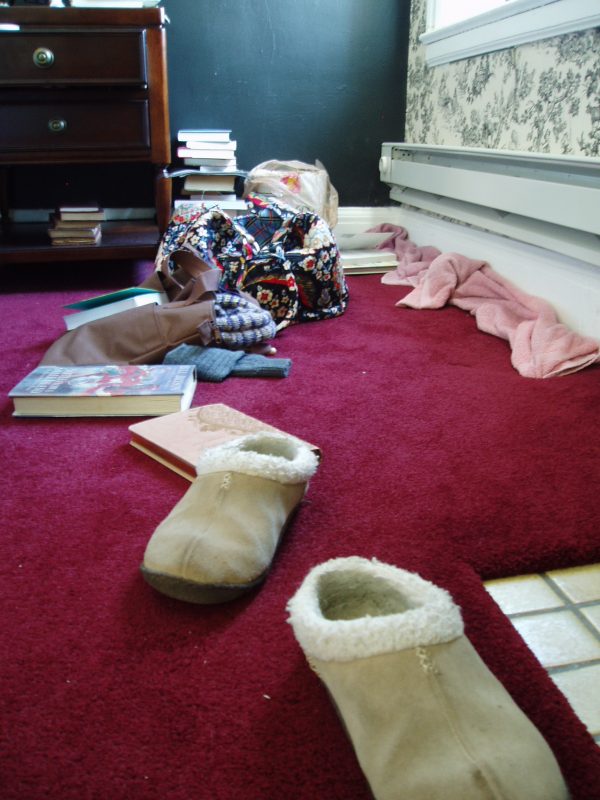 I can explain. You can see stacks of more books to read. A trash can next to those, lined with a Super One Foods grocery bag. My multi-colored purse in front of that. And then, sticking out of a brown tote, some knitting I’m doing with purple yarn my daughter dyed. In front of that, you have a nice view of a gray wool sock, part of a pair my friend Su brought back from Ireland for me years ago. The book in front of that I finished yesterday: Notes From A Small Island by Bill Bryson, whose writing made me laugh every couple of pages and burst into paroxysms of violent coughing that almost turned my fingernails blue from the gasping. The leather book in front of that is my gratitude journal. Thank you Ann Voskamp, that I could truly find things to exult over while I was laying there with walrus-tusks of twisted Kleenex stuffed up my nose. Then, lastly, you have a view of my Sorel house slippers that I wear in the winter, to uh, slip around the house in. You may notice the pink towels pressed against the wall under the heater? When you live in a house that is 85 years old in a place that is bitterly cold in the winter, you quickly learn which parts of the house (which was built long before the terms “r-factor” and “energy crisis” were even thought of) are vulnerable to seeping cold. This is a spot in the room where the icy claws of cold creep into the room and grab you by the ankles when it’s 20 below outside. Unless of course you take some ugly pink towels and place them carefully over the uninsulated spot. Then the claws of cold can’t gain entry into your bedroom quite as easily.

On to a new view. We are still looking to my left (from the bed, remember), but now we’ve moved on in the room a bit, to the fireplace. The fireplace that has never seen a fire since we moved into this house three years ago. Because the fireplace sucks all the warm air out of the room during intensely cold weather. The fireplace that looks nice, but has had its outside chimney capped, to prevent the warm air from escaping. Those of you from extremely cold climates will know what I’m talking about. Those of you from more temperate climes who love a crackling fire on a coolish night will wonder what the heck I’m talking about. Oh well, we need to move on. 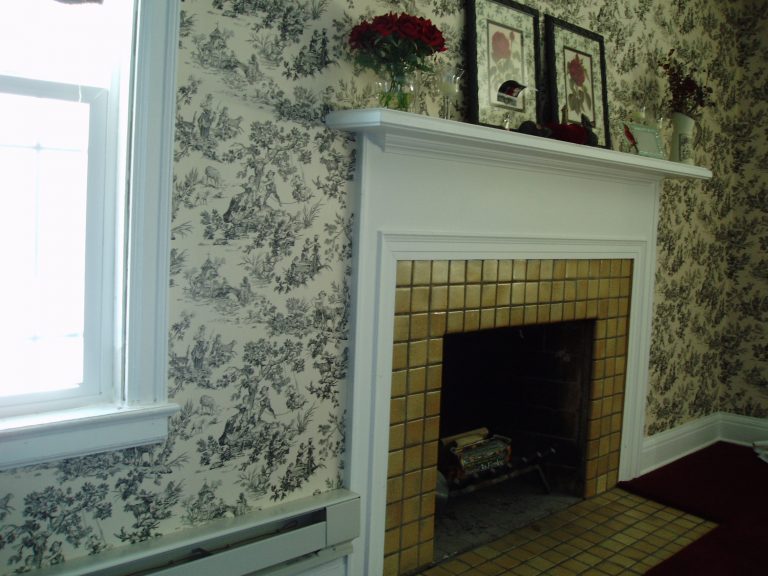 Let’s pan our view slightly to the right a little more. Next you’ll see what I see as I’m looking out over my feet bumps under the comforter at the end of our bed. You see a magazine rack on the left, full of more reading and study materials. There’s a big, comfortable overstuffed chair with an ottoman, and it has a dark green towel on it. This is where our oldest Schnauzer, Edith, sleeps at night. The dogs are relatively clean, but I have a thing about a teeny bit of dog dirt added to a teeny bit of dog dirt multiplied by a TEENY bit of dog dirt over an extended period of time, eventually equaling an enormous amount of dog dirt on furniture in the end. So the dogs can come up on the bed and the chairs, they just have to lay on a towel or something.

You might be able to see between the two chairs a small antique table and a French lamp that my friend Lana gave to me. On the floor is a CD player with a CD in it that I’ve been playing over and over again since the beginning of time. It has delightful, background birdsong on it, and some Celtic-sounding music that’s soothing and hypnotic. 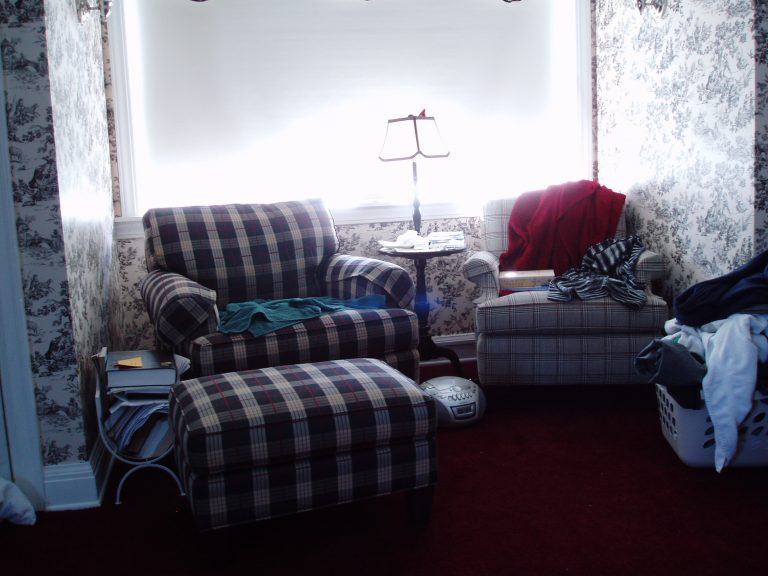 Now look to the right a little further and zoom in a bit. Normally things are a little neater in our bedroom, but no one cares about things like that when illness strikes. On this chair you can see a red throw that is so heavy it’s startling  when you lift it — when I cover our grandchildren with it they say, “That raspberry blanket is really warm Grandma!” And you can see my beautiful prayer shawl that Sharon made for me as a Christmas gift. And my CBS notebook (we’re studying the book of Acts this year), and another book I’m exploring. 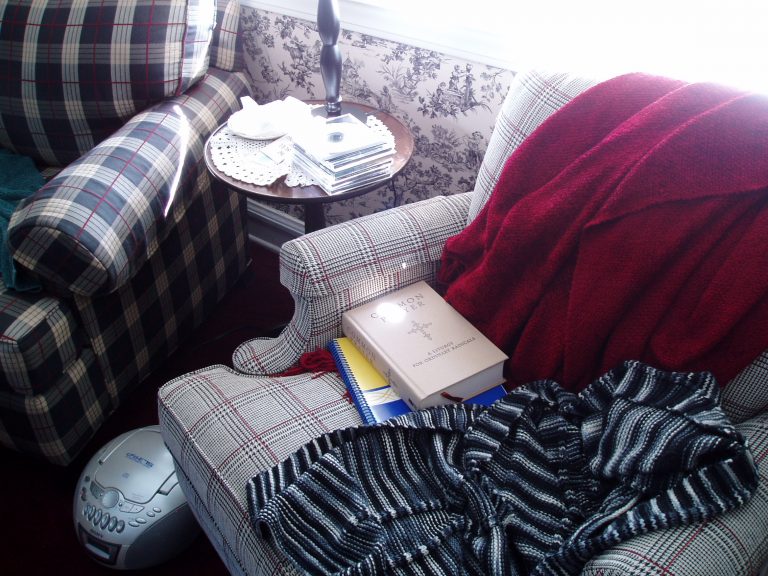 I include the next photo to draw your attention to the small radiator, over in the corner by one of the closets. On top of this radiator sits a tray of tea things. There are various tea bags, a few sugar cubes in a small Tupperware container with a dark red lid (to match the red accents in the room), there are normally two cups, a tea bag squeezer, and an electric tea kettle. The tea kettle isn’t on the tray in this particular picture, because it’s plugged in and heating water in the bathroom for another cup of tea. 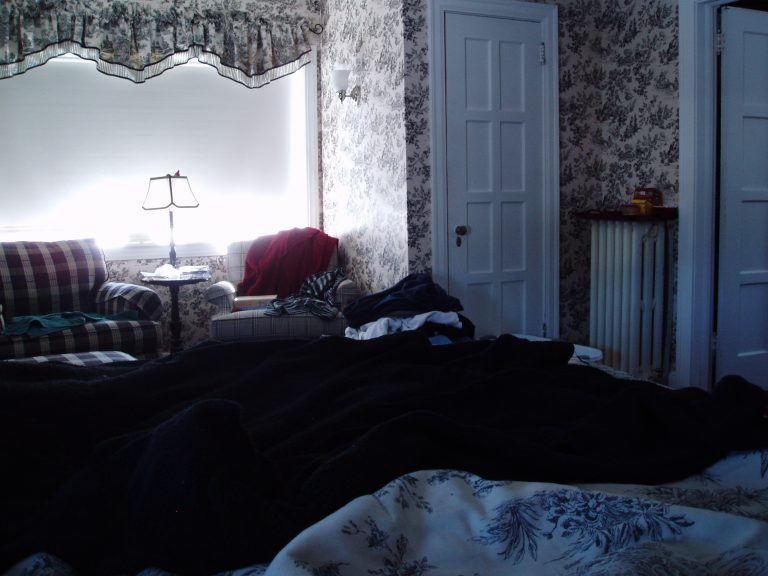 What’s that you say? You don’t think an electric appliance should sit on the side of the bathtub in one’s bathroom? Yes, I agree. This tea kettle is never in the bathroom when there’s water in the tub. It will be moved back to its red tray on top of the radiator as soon as it’s done boiling water for my tea. And the teabag squeezer doesn’t usually share space with the peperomia plant in the bathroom either. This all happens for just a few minutes now and then when a cup of tea is called for, because an easily accessible outlet is right there. 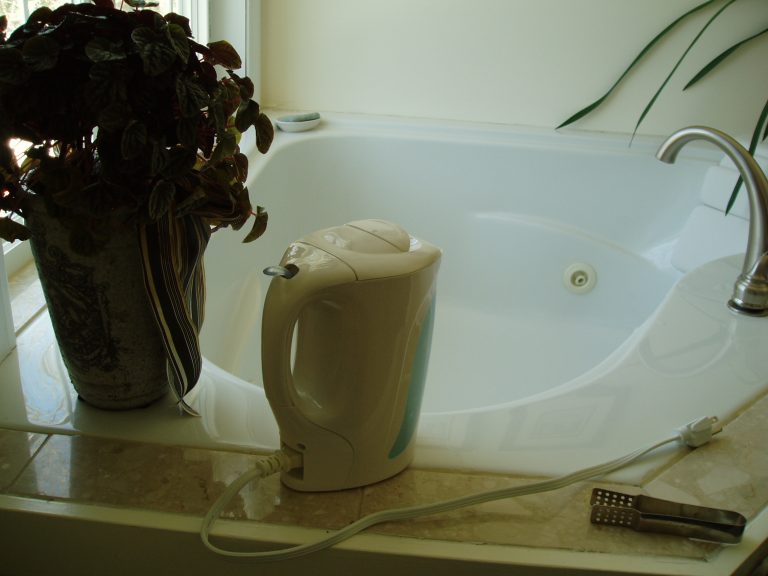 Before we return to the bedroom for more exhilarating views, let’s take a peek out the bathroom window at the back of the house to see if there are any visiting deer. We’re in luck — there are! If you click to enlarge the photo below, you will see some of these graceful animals across the creek in our patch of woods. Find the hanging bird feeder in the photo and look right above that to see them. I believe you can even click one more time for more magnified views. 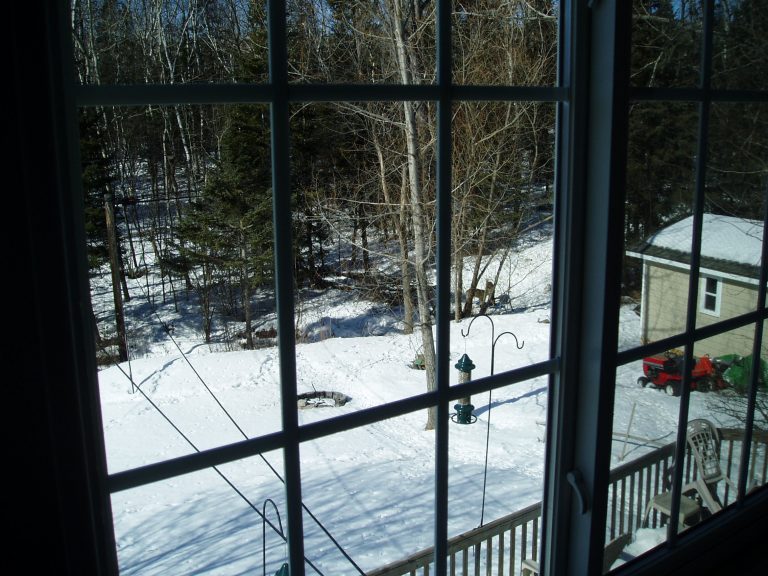 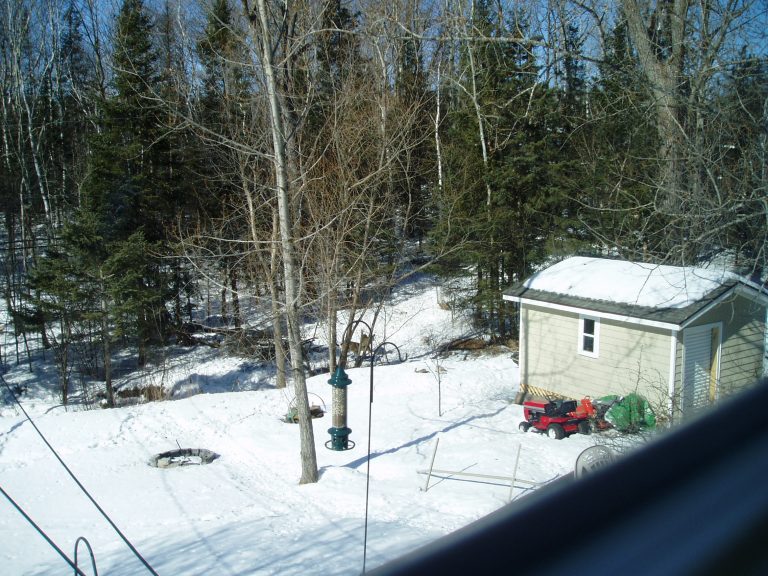 Well, now that we’re getting weak and shaky and need to get back to bed and blow our nose, let’s leave the deer behind and continue our tour.

When I couldn’t sleep and was too tired to read or knit, I contemplated this huge dresser and thought of my Grandpa Bud and Grandma Oma McInteer. They owned this mahogany Drexel bedroom set and I used to look at it when I was a young girl and was told not to touch or I would leave fingerprints. My mother owned it after my grandparents died, and when my mom died eighteen years ago this week, I inherited it. It’s not so shiny new-looking anymore, but it brings memories I’m thankful for. 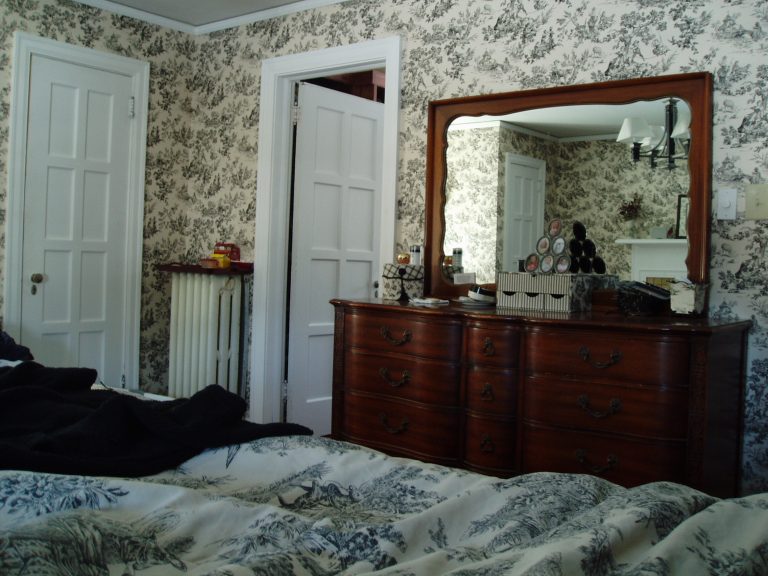 Michael brought up the mail one afternoon and wonderful things were delivered. A beautiful photo of a dear granddaughter who lives in Red Wing, MN, bills, that if paid, will keep us in warmth and water for another month, and a new book from my friend Ember, with a nice note. Notice the ubiquitous used Kleenex…a view of real life when the flu is running rampant in your body. You can also see my Kindle, where I read this book in two days, alternately exclaiming, “You’ve got to be kidding me!” and “This is incredible!” and “No no no no no!” and “Yes! Yes! Yes! Yes!” and “This just cannot be happening!” and “Praise the Lord!” because the book should be read by every human on the planet and is something I hope to never, ever forget. 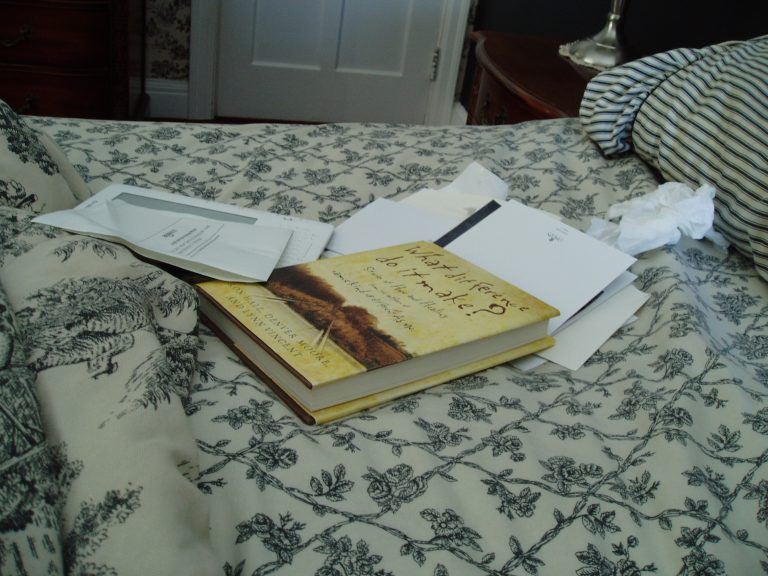 Here are a couple of photos of what I was able to ponder while laying flat on my back: the too-large light fixture over our bed… 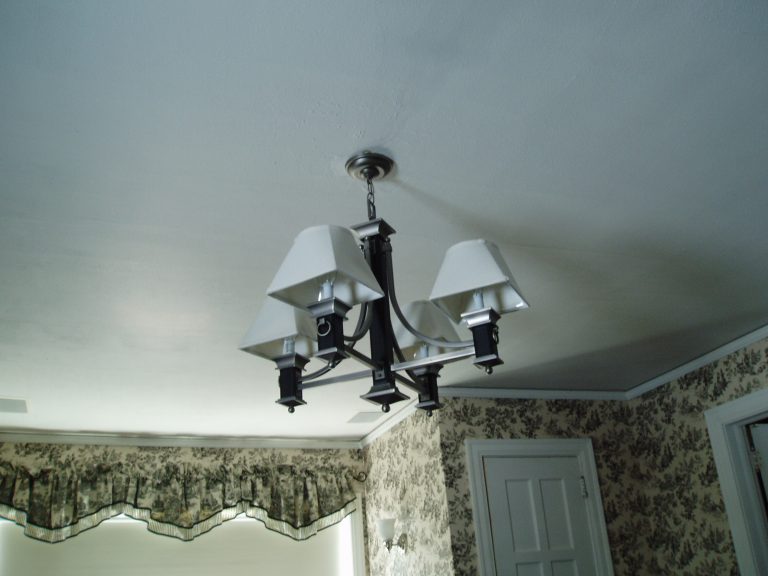 …and the dessicated remains of a mosquito on the ceiling that I swatted last summer and forgot to swipe away.

My photography skills are impressive, no? 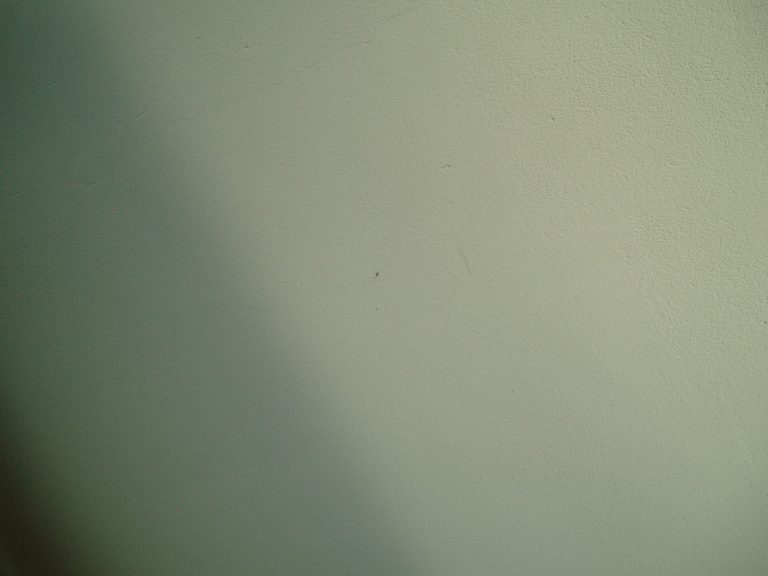 Well, I think it’s time we bring our tour to a close. This room has afforded us many views. Perhaps this post should have been called Room With A Few Views instead of Room With A View. I thought the latter sounded a little more succinct.

Here’s the last view in the room — one that I couldn’t see (thank you God) but one that Michael saw when he came upstairs to check on me, or to lay down beside me to keep me company, risking contagion and virus replication in his mucus membranes. 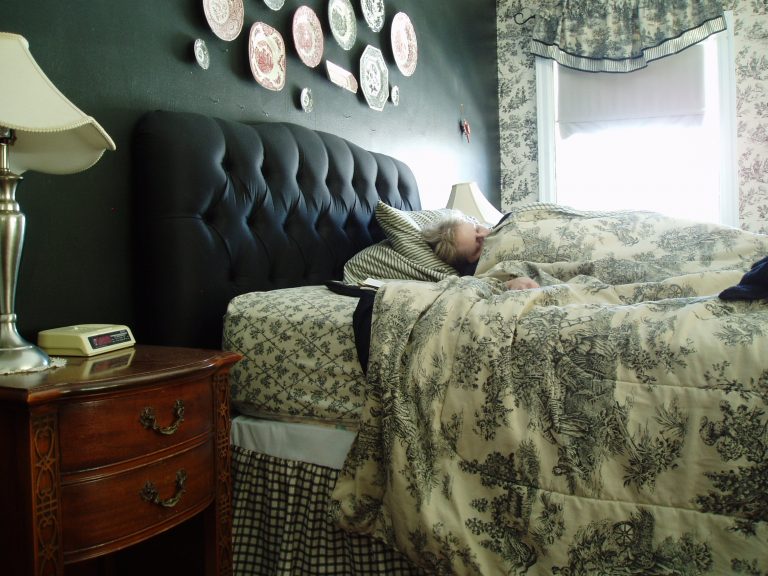 I think I’ll head back upstairs to rest a while now. I’ll throw away the Kleenex, turn on my birdsong CD, and later I believe I might actually get dressed in real clothes for the first time in a long while.

This now concludes our tour. Please use the handrails and watch your step on the way out.

Have a blessed, virus-free weekend!