On the last Saturday in November of 1975, I made a colossal mistake and received some of the most profound blessings of my life.

On that day I married a man who I suspected wasn’t going to be the kind of husband I needed, even though I wouldn’t allow myself to address those warning bells in my mind. At first the bells just sort of quietly tinkled and they were easy to ignore. Then as the years passed they began to go bong! bong! bong! and I heard them but foolishly decided not to heed their clanging. He had been my boyfriend for three years and I “loved” him. Not in the 1 Corinthians 13 type of love that a marriage truly requires if it’s to survive, but the gooshy, let’s have fun and live happily ever after kind of love. Which isn’t really love at all.

But what did I know when I was eighteen years old? What did Glenn know when he was twenty-one? Not much of anything, it turns out.

I made my wedding dress for thirty-five dollars, and my veil for ten. Glenn wore his Air Force dress blues, and I asked the florist to make a small bouquet with blue in it to match his uniform and the blue grosgrain ribbon I put around the empire waist of my dress. We got married in the teeny tiny Wayside Chapel of Rough and Ready, California, with seven other people present, if you count the minister. 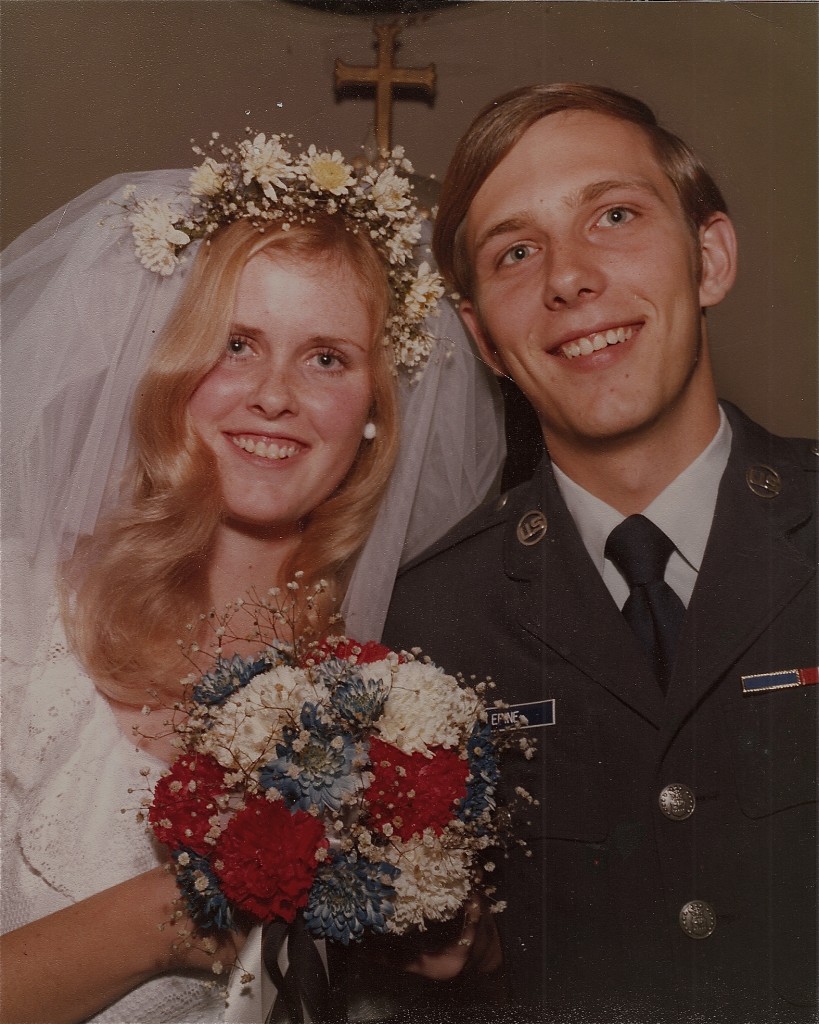 We lived in a three-room trailer on the banks of the Yuba River in Smartville, California for the first six months of our marriage. I have a few good memories from those times. I loved living on the formerly gold-rich Yuba. I cooked, walked our Schnauzer Prissy and our Old English Sheepdog Amy, played Fleetwood Mac practically round the clock, and enjoyed decorating our first little home and keeping it neat.

Then we moved into a three bedroom house on Beale AFB about twenty miles away, and about a year later our first daughter was born. When Sharon was eleven months old we moved to a beautiful little village in Germany, less than an hour from the Luxembourg border. To say that I loved my two years in Germany is an understatement. I loved the people, the beauty, Bavaria, learning the language, the slowness of our lives there. Our second daughter Carolyn was born there at Landstuhl Army Hospital when Sharon was twenty months old. Those two sweet little girls were doted on by our German landlords Aloys and Anna Diel. I’ve already written about living in Germany more in depth right here, if you’d like to read it.

When Sharon was two and Carolyn was eight months old, Glenn came home from work one evening and told me he had found someone else and didn’t want to be married to me anymore. His new interest was a musical person who played several instruments, and since he was very into guitar and his own song-writing, he felt a bond. She left her husband, Glenn left me, and that was the beginning of the rest of my life.

One of my most vivid and emotional memories of that time was when Glenn had made his decision and started hanging out at Karla’s apartment. The United States Air Force took their time in attending to all the red tape and paperwork in order to send me and my two daughters home to California, so several weeks went by while we waited. Our Volkswagen Rabbit had to be shipped across the Atlantic, my household goods had to be packed, crated and shipped. Before all this happened, Glenn and I traded off using our car. One day I had arranged with him to bring the VW so I could grocery shop, and when the agreed upon time came and went, I was frustrated. We didn’t have a phone in our German house, and cell phones didn’t exist yet. Then two hours passed and I was angry. How could he be selfish enough to not care if we had groceries? I set out on foot, pushing one child in a stroller and carrying the other on my hip. I walked two miles like that on the side of the road, all the way into Birkenfeld where Karla lived, and where I thought Glenn would be. By the time I reached her apartment building I was steaming inside. I knocked on the door and Glenn’s new love answered and said cheerily, “Hi!” and I responded evenly, “Is Glenn here please?” She looked back over her shoulder toward the area in her apartment where they’d obviously been playing music together and called loudly, “Hey a- -hole! Your wife’s here!” I remember feeling taken aback and thinking, She calls him a- -hole? Glenn sauntered to the door and offered no apology for not bringing the car when he said he would. The time had gotten away from him. As he and I and our two daughters walked to the car so he could retrieve his things and hand the keys to me, I lost it. All the prayer and patience and quiet suffering I’d lived out during the past several weeks evaporated in one second, and I hauled off and kicked him on the shin as hard as I could. And tried to punch him at the same time with the one free hand that wasn’t holding a child. I yelled, “I can’t believe you would DO this!” He dodged the punch but the kick hit home. And perhaps because we were on a busy street with traffic speeding by, he didn’t do or say much in response.

I regret that angry act of mine, and months later I told Glenn so. Even though my children were too young to remember that day, I still feel badly that I subjected their little minds and hearts to such behavior. Apparently a few folks saw that exchange and rumors which had already begun to fly in the local military community were confirmed. Glenn told me many months later that he and Karla were somewhat ostracized during that time, and it was very difficult and lonely for them.

They eventually married and moved to Minnesota, where she was from originally. And then after ten years of marriage, he found a new love and divorced Karla. Glenn and his third wife have been together a long time now, have raised her two sons, and are apparently doing fine.

I share this today because there’s a theme running in my life right now and it’s all about love. The real kind of love, the kind that God says is patient and kind and not proud, the kind of love that inspires a person to forgive and forgive and try again, respecting and speaking highly of others, treating them as the people they could be and not necessarily as the people they are. Now as an older woman looking back, I realize that while Glenn certainly did me wrong and wounded our children, I didn’t know how to truly love back then. He wasn’t the husband he should have been, but I wasn’t the wife I should have been either. It has been easy to forgive him, because as the years have passed I have seen how destructive my own more “acceptable” sins were, and how merciful the Lord has been with me.

I’m not sorry I married Glenn, because my two daughters have brought me riches untold. The only pain that remains is what I feel when I ponder how our divorce affected our beautiful children. That can bring a deep sorrow that I must take to the Lord and leave with Him. He’s the only one I know who can deal with such things.