Humiliation on the William A. Irvin

(Reposted from the archives…)

I have always liked practical jokes. Not cruel ones, but the good-natured kind that take everyone by surprise and make for a memory that lasts forever.

About fifteen years ago my oldest daughter Sharon was in college, almost finished earning her degree for teaching Social Studies to high school students. She was a great student herself, and had part time jobs all the way through her college years to support herself.

One of Sharon’s summer jobs was as a tour guide on the William A. Irvin, a huge, retired ship docked in our harbor. Over the years of the Irvin’s service on the Great Lakes, she carried millions of tons of iron ore to various destinations; ore which is mined in northern Minnesota. The vessel is over 600 feet long, and is similar to the famed Edmund Fitzgerald, which sank in a stormy Lake Superior in late 1975.

One fine summer day, my dear friend Kathleen, who is one of the funniest people I know, conspired with me to play a little practical joke on Sharon. We thought it would be the most wonderful thing to dress as hobos or homeless people, and show up unexpectedly at the William A. Irvin to take the tour given by Sharon. Because Sharon has a quick and quirky sense of humor herself, we knew she would appreciate what we were doing, and all the trouble and time it took for us to do this.

Michael, Kathleen and I did everything we could think of to make ourselves look strange. We colored our teeth brown with eyebrow pencil. We wore clothes that didn’t match and didn’t fit. I pulled on a petite orange sweater over my plus-size clothes on a very warm day, and wore a holey hat. We put a ton of gooey, shiny gel in Michael’s hair, plastering it down and arranging goofy little points on his forehead. Michael wore an ugly double-knit “tourist” shirt, elastic-waist shorts pulled way up to his armpits, like some older men wear their pants. He wore black knee socks and old shoes. I browned out one of my teeth; Kathleen did all of hers. And I carried a hand-held personal fan to take with me. We practiced quirky expressions (see Michael below) and odd, nasally ways to speak. We posed for a quick photo before we drove down to the ship to surprise Sharon for our tour.

Many people were on the tour that day — families with children mostly, and the three of us. As soon as Sharon stepped out of the office to call the next tour-takers around her, I raised my hand and twittered in a nasally voice, “Hi Sharon! Hi Sharon! Hi! We’re here to take the tour Sharon! We’re so excited Sharon!” Michael and Kathleen also greeted her with great enthusiasm. Probably no one else noticed it, but I saw the split second of shock on my daughter’s face. Sharon is quick though, so in a flash she was in I-don’t-know-these-people mode, and she carried on the hour-long tour with composure, confidence, and her usual uncanny ability to retain and impart encyclopedic amounts of information about any given topic. In this case, the topic was the history of the esteemed William A. Irvin, and all the things that made this ship interesting. 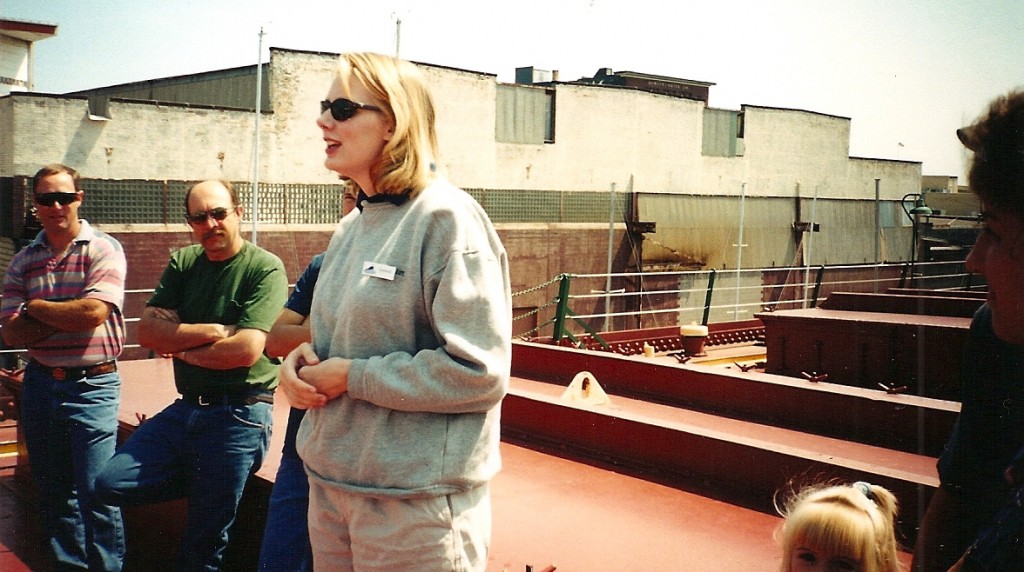 As the tour proceeded over several decks of the ship, we three waddled along behind the crowd, who politely and consistently kept their distance from us. I used my personal fan two inches from my flushed face for most of the hour. We clapped our hands giddily when Sharon extolled about the luxury of the ship’s elegant guest suites. We made perfect O’s with our mouths and nodded at each other, sort of like these guys do on Sesame Street. We twittered, we gawked, we grinned stupidly as Sharon knowledgeably led the tourists through the ship and pretended that Kathleen, Michael and I were completely invisible. 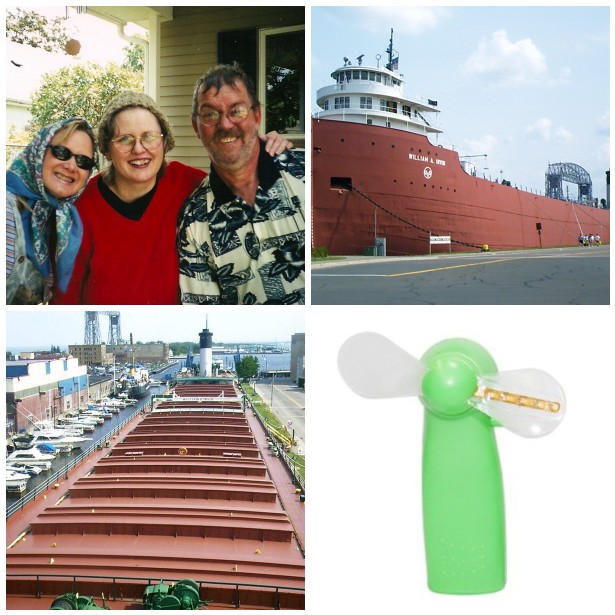 After the tour was over, the three of us thanked Sharon profusely for how thoroughly impressive she was in her position as a docent on the distinguished William A. Irvin. I’m not sure she heard our rhapsodizing, though, because she didn’t make eye contact with us as we were bobbing and gushing. I think there was something exceedingly important for her to do in the ship’s office, because after ending the tour she headed in that direction posthaste.

I’m not sure if we created a good memory for Sharon or not, but I do know that Kathleen, Michael and I gave ourselves something to cackle over for the rest of our lives.  🙂

How about you? What practical joke have you played on someone? Or what’s one that has been played on you?