The House on Eckerman Avenue

(Reposted from the archives…)

We moved into the house on Eckerman Avenue when I was three years old. I remember being in the back of an open trailer being towed by our Buick station wagon, with my thirteen year-old brother Steve and our dog Dutchess, and pulling up in front of the house for the first time. My parents chose the house because it was new, and one block from Covina High School where my father taught school and coached basketball. When we moved in, the house was yellow with brown shutters.

So many milestones happened in that house. I have some wonderful memories from the twelve years we lived there. And there are some pretty sorrowful memories too.

I made my first real friend at that house — her name is Tauni and she and I are still friends today. She lived on Puente Avenue, just over the fence from us, and I spent many carefree hours with her family during my childhood, especially in their built-in swimming pool.

I learned to read when I lived in that house on Eckerman Avenue, and of course had no idea that reading a Nancy Drew book a day was paving the way for one of the greatest pleasures I have in life — books.

I met Denel when I lived in that house, when we were in second grade at Workman Avenue Elementary School. We spent countless hours together in her house on Rowland Avenue and in mine on Eckerman, playing hopscotch, listening to music, doing homework, dreaming dreams.

I remember a favorite snack I enjoyed in that house — a spoonful of peanut butter and one of grape jelly, washed down by a swig of milk. I still like that treat today.

Perhaps my love of green and blue began in that house. My mother decorated with teal blue and avocado green, which looked fine back in the 60s. Today I’m always drawn to blues and greens.

On Eckerman Avenue, we had six fruit trees in our large back yard. Nectarines, plums, apricots, and lemons the size of oranges, and a ground cover of wild strawberries all along the perimeter of the fenced-in yard.

Some other random vivid memories are of my mother’s wonderful tacos with home-fried corn tortillas, the one fire a year we were allowed to have in our living room fireplace, bike riding for miles, skateboarding, visits to the beach forty minutes away, watching Saturday morning cartoons and putting off my chores, going barefoot almost everywhere, my mother’s amazing talent on our Hammond B-3 organ, my own organ lessons with a brilliant woman named Gerry who’d been blinded in a fire and who lived in a trailer park, braces on my teeth, thick glasses on my face, my father allowing me to sit in the front seat of the car and steer while he braked and accelerated, going to Sunday school each week and growing in my love and awe of the Lord, and thinking I might be an astronaut someday.

Other memories from the house on Eckerman Avenue are a little darker. I remember my father driving away with his face all screwed up in tears, and the few months he and my mother were separated. He had his own apartment nearby and I visited him on weekends. When he moved home I was very relieved. I also remember my mother’s depression, which I couldn’t identify then but recognize now. I remember feeling lonely a lot, in spite of my few dear friends.

One horrible night time memory comes from when I must have been about three or four. My parents were out and my two older brothers (who were about thirteen and eighteen) were home, and I was in bed. I was awakened by the sound of my younger brother screaming and crying while my oldest brother violently beat up on him. I went into the hallway sobbing and begged for my brother to stop hurting my other brother, and he yelled at me, “Julie, get back to bed!” and he didn’t stop for a long time.

Also in the house on Eckerman Avenue I began to lose hope. Things between my mom and dad grew more silent and distant and I knew her world of music and his world of sports weren’t meshing. I grew tall, buck-toothed, long-legged and more gangly by the month, and by the time I was thirteen I was convinced I was unattractive and that no one would ever love me.

When I graduated from Traweek Junior High School (the eighth grade), I was thirteen, and that summer my father told my mother he wanted a divorce. 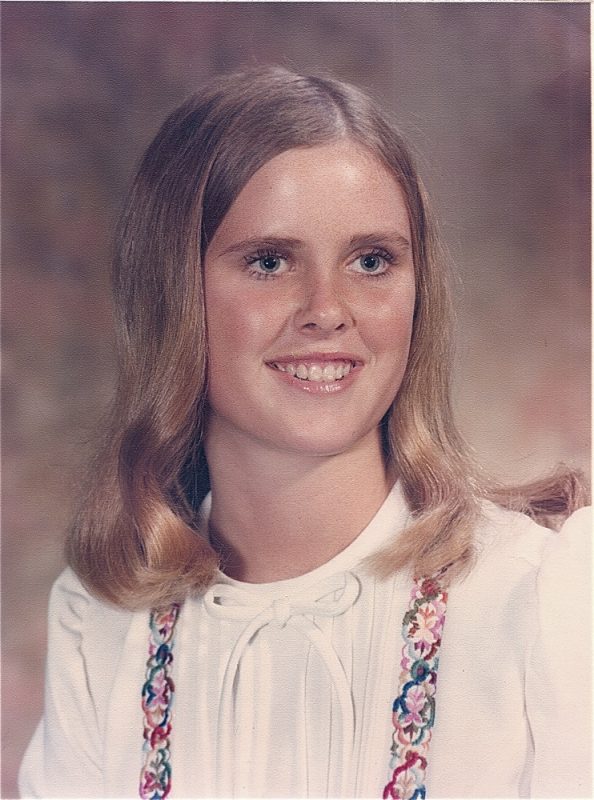 It was also at this time that other relationships in my family finally broke apart after having been fractured by pride and anger for so many years. I felt like the ground had opened up and was slowly swallowing all of us.

I prayed and asked God to restore my parents’ marriage and it never happened. Of course I know now that neither one of them were exactly walking in God’s ways, but in my immature faith I couldn’t understand why God wasn’t bringing the miracle I was pleading for.

As the years passed I continued to be a good student and always did well in school. I was a cheerleader. I had a part-time job after school and bought my own car. I was involved in sports. I had a boyfriend or two. And my friends and I had some pretty fun times together. On the outside, I think children can carry on and appear as if divorce doesn’t crack the very inner foundation of their lives.

But God was also faithful to me when I lived on Eckerman Avenue. I didn’t understand this fully until I grew into my (middle) old age. So many times we can’t see God’s hand in the pain and hard times we’re experiencing. We ask Him to remove them and when He doesn’t, we wonder what the heck prayer is all about. I wish someone had taught me more about this when I was young. Anyway, I can look back now and see His hand of protection on me in so many ways. I can see His mercy threaded all through those dark times, and I’m so thankful He has allowed me to live long enough to recount them.

In the house on Eckerman Avenue, a seed of faith in Jesus took root and I became a Christian. In the glorious jumble of darkness and light and hope and fear that was my young life, Jesus reached out and chose me. (See Ephesians 1:3-10).

And I chose Him back.

And by His grace, I choose Him again today….