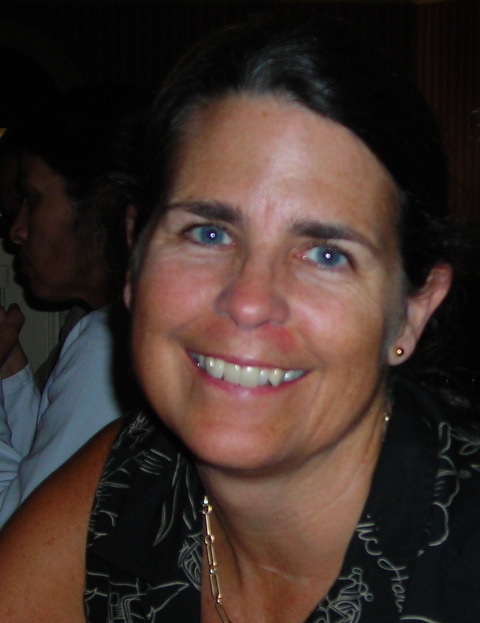 I am excited to introduce you to Tauni, one of my oldest friends. She’s only a year older than I am, so I don’t mean one of my most ancient friends, I mean that Tauni is someone I’ve been friends with a long, long time.

Tauni and I met when we were very young – she lived in the house behind mine, or you could say I lived in the house behind hers. My family moved into that particular house when I was three and I believe Tauni and I met within a year or two, so we have known each other for over forty-five years. Our yards were separated by tall cinder block walls typical of what you still find in Southern California, and Tauni’s family was one of the privileged ones in our neighborhood who had a built-in swimming pool in their back yard. As I wrote earlier here, I was passionate about swimming from the time I was about five, and it was in Tauni’s pool that I spent most of my swimming hours. It was on that high block wall that separated our back yards that I often sat, looking longingly over into her yard and hoping that I would receive an invitation to come and swim.

Our lives did not converge that much in school. Tauni played the flute and was in band; I took organ lessons at home on my mother’s behemoth Hammond B-3.  Tauni and I even had different groups of friends we hung out with. Her parents were much younger than mine, and her family vacations usually centered around water-skiing at Lake Nacimiento, while mine were more sedate and involved driving north to Morro Bay and taking lazy strolls on the beach. Tauni was the oldest of four children; the only girl. I was the youngest of three children; also the only girl. We often spent the night at each others’ houses when it wasn’t a school night, sleeping in a pull-out couch and staying up late to watch television. Almost every scrapbook from my childhood has several photos of Tauni and me doing something together.

I think Tauni would say that she best remembers our many outings to Disneyland, our just as many trips to the beach together, and my mother’s homemade popcorn balls, which we wrapped in wax paper and were the size of cantaloupes.

I remember all of Tauni’s younger brothers, Rodd, Brett and Glenn, and the constant activity in their home and back yard, and the fun and the wild splashing and the creative games they engineered. I remember her dad, who teased me for years about being a Tibetan Llama (too long of a story), and her mom, who had a huge and warm smile, and always elicited the open-hearted sharing a young girl thrived on. I used to marvel at the intercom in their house, and the soft and soothing music that always came from the speakers in each room. I used to covet the lazy susan sitting in the middle of their round dining table.

A very vivid memory I have of being with Tauni and her family involves two specific songs. I can remember riding in the way-back of their station wagon with a posse of kids, on the way home from a day at the beach. We were all full of sand and either tanned or sunburned, and Tauni’s mom Ann was driving, and the radio was on. Creedence Clearwater Revival’s “Lookin’ Out My Back Door” was playing, and Tauni’s youngest brother Glenn was singing his heart out on the “toot, toot, toot” part, with a huge grin on his adorable face. Then, when B.J. Thomas’s “I Just Can’t Help Believing” came on, Tauni’s mom murmured, “Oh I love this song”, turned it up and sang along quietly. To this day, whenever I hear those two songs, I’m instantly transported back to their car and the water-logged, sun-drenched days of our childhoods.

As the years passed, my parents divorced and my mom and I moved to another house, and Tauni’s family also moved, toward the end of her high school years. They were still in the area, but we didn’t see each other that often. We didn’t even go to each others’ weddings.

But God is the most brilliant crafter of friendships, and He knew when He merged our lives as children, that Tauni and I would need each other decades later as grown women. So we never completely lost touch. Sometimes years would go by, but we would still occasionally write letters, exchange our children’s school photos, and call each other to catch up. It seemed that the closer Tauni and I both grew to the Lord, the closer we grew to each other. Our friendship as adults is much deeper and more connected than it was as children.

I have watched this dear friend walk through things that would have ruined some, but she has clung to the Lord and His fragrance is always around her. I have seen Tauni persevere in circumstances others would not have endured. The loss of a cherished brother. The end of a marriage. Dark times. But I have also seen that she has chosen to forgive, to bless others in the midst of her suffering, and to allow hardship to make her better, not bitter.

We all know people whose hard and relentless circumstances are written into the very lines and expressions on their faces. But Tauni isn’t one of those people. Look at her picture. The vivacity and joy and optimism you see there are real and deep. The trust she has in her Savior not only permeates her life, but shows on her countenance as well.

Tauni is the mother of two beautiful adult children who consider her their hero. She has made her mark on this world in many ways, but as a mother, most don’t even come close. She is now enjoying being a new grandma to her daughter Shannon’s baby Ben, and someday he will know how blessed he is that God gave him Tauni for a Nana.

Tauni and I are separated now by over two thousand miles. In years past we have each traveled and visited one another, and now we’ve made tentative plans for a long-overdue visit in 2009. The last time I saw her in person was in January of this year, when she and her new husband Curt (who is the blessing she has deserved all her life) drove quite a distance to attend a memorial tribute for my father held in Southern California. We only had a couple of brief hours together there, but as we sat together, I pondered thankfully what we’ve shared. Tauni and I share years of history. Countless memories. And an abiding faith in Christ that has kept our friendship intact for all these many years, and will continue to bind us together for the rest of our lives on this earth, and into eternity.

I admire and love her so. To me, she is beautiful inside and out. I wish everyone could know her. I am so glad to introduce you to my dear friend Tauni.