Growing up in Southern California always provided me with many opportunities to swim. Many of our neighbors had built-in swimming pools in their back yards, and of course we had hundreds of miles of Pacific coastline to choose from as well. Surrounded by so much water, my parents made sure I had swimming lessons at an early age. By the time I received my certificate of completion when I was five, I was hooked. Pretty much all I cared about for the next ten years was swimming. And books. Books and water competed for my affections, but water usually won out and it animated my young life. Until we moved to a house with a pool during my sixteenth year, I spent a lot of my childhood fervently hoping my friends with pools would take pity and invite me over to swim.

I also loved the beach. Sometimes my parents would take a drive to Huntington Beach and I could hardly wait to get my feet in the water. It didn’t matter if it was a 90 degree summer day or a 50 degree winter evening. As long as I can remember, I have been irresistibly drawn to water. I learned to body surf and enjoyed catching and riding the waves in to shore, but for some reason what I always wanted to do most was swim as far out into the ocean as I could. 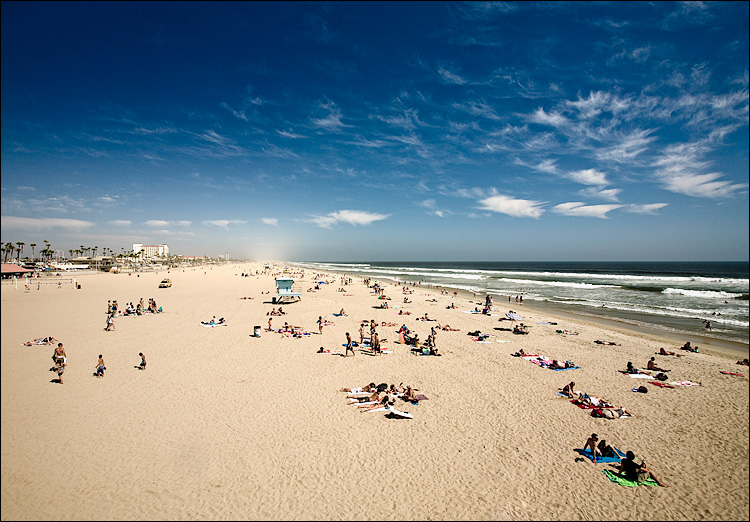 My father would sit on the sand and watch me swim. I used to tell him, “Daddy, wave your hand up high when you think I’m out a mile!” I would swim way out past the breakers, and then stop to tread water and turn to see if Dad had his arm up. He never did, that first turn.

I would swim farther out, sometimes brushing my feet and legs against the rubbery, floating kelp beds as I kicked, and I always got the creeps thinking that those thick, slippery vines and leaves were trying to grab on to me. Then I would turn and look toward the beach again and see that the form of my father had gotten a bit smaller, but he usually didn’t have his arm up the second time either.

So I’d put my face back in the cold water and swim so far out that the people on the beach looked like colorful dots. I could distinguish my father from others only because he was a large man and usually wore a white short-sleeved sport shirt and was sitting close to the water.

Many times I would stop to float so I could rest and catch my breath; swimming was hard work. Before I started out again, I would deeply breathe in and out, in and out, then fill my lungs with as much air as they could hold, and dive down, down, down as far as I could, trying to touch the bottom. I tried not to open my eyes as I always did in chlorine pools, because the salt water burned so intensely. When I swam out so far that I couldn’t touch the ocean bottom when I dove, I always knew I was pretty far out. I would tread water again and look back to the shore to find my father’s white shirt, and could just barely see his upraised arm waving back and forth at me. Then I would start swimming back to him.

Never once did the thought of an ominous dorsal fin gliding silently across the surface of the water enter our minds. This was before the movie Jaws came out and before the days when shark attacks became so commonly reported. You might ask, “What on earth was her father thinking, letting his little girl swim out so far into the ocean?” And here’s my answer: I don’t know. There is no way I would have allowed one of my children to do what I did. Had they tried, I would have been the first mom running into the water with her clothes on, yelling, “Get back here! Don’t go so far out!” In those days fear didn’t seem to reign as it does now. Maybe there were just as many shark attacks and kidnappings imperiling our children, but we didn’t hear about them as much as we do today. Perhaps he wasn’t cautious enough, but my father was not afraid that I was going so far out of his reach that he couldn’t save me. And I certainly wasn’t afraid. I have never had an iota of fear when it comes to water.

I realize now that my father didn’t really let me swim an entire mile out to sea before he gave me the come-back signal. But at ten years old I didn’t know that. I don’t know why I wanted to swim out into the deep water. I just did.

Something has always drawn me to the deep things in life. I like movies and books that have hidden messages beneath the scenes or the words on the surface. I like deep conversation. I like in-depth Bible study. I like to try to figure out the meaning of things. I like deeper, darker colors. I like mystery.

But for all that, I sometimes feel like I’m stuck in the shallows. Because to go deep with the Lord requires surrender. To fully experience the depths of His unfathomable riches, I know I have to give up control. I kinda sorta want to do that, at least that’s what my head tells me. Why would I hold anything back from my Heavenly Father who has proven Himself faithful to me again and again? I don’t have an answer to that. But I find myself still dallying around sometimes, sitting at the water’s edge and putting my feet in, splashing the water on my face, but not throwing caution to the wind and diving into the deep, where it’s way over my head. And I’m not sure why. I hate to admit it, but I think fear has something to do with it.

I’ve memorized these verses (with a friend) and as I meditate on them, I’m asking God to reveal more to me.

And I pray that you, being rooted and established in love, may have power, together with all the saints, to grasp how wide and long and high and deep is the love of Christ, and to know this love that surpasses knowledge—that you may be filled to the measure of all the fullness of God.  Ephesians 3:17-19

I wonder how we can possibly have the power to grasp how wide and long and high and deep the love of Jesus is for us?  Yet these verses say that with God’s enabling, it is possible.

Maybe I need to go back to my old childhood ways. I remember how exhilarating it was to run into the pounding Pacific surf and swim out past the huge waves to deep water. I think God is calling me deeper with Him, and I might be afraid to go.

There’s a passage from one of my favorite C.S. Lewis books, The Lion, The Witch and The Wardrobe, that I draw comfort and courage from. The Pevensie children are in the home of Mr. and Mrs. Beaver, and they’re hearing about Aslan the Lion, King of Narnia, for the first time.

“Aslan a man!” said Mr. Beaver sternly. “Certainly not. I tell you he is the King of the wood and the son of the great Emperor-Beyond-the-Sea. Don’t you know who is the King of Beasts? Aslan is a lion – the Lion, the Great Lion.”

“Ooh!” said Susan. “I’d thought he was a man. Is he – quite safe? I shall feel rather nervous about meeting a lion.”

“That you will, dearie, and no mistake,” said Mrs. Beaver, “if there’s anyone who can appear before Aslan without their knees knocking, they’re either braver than most or else just silly.”

“Safe?” said Mr. Beaver. “Don’t you hear what Mrs. Beaver tells you? Who said anything about safe? ‘Course he isn’t safe. But he’s good. He’s the King, I tell you.”

“I’m longing to see him,” said Peter, “even if I do feel frightened when it comes to the point.”

I think I can long to see something or Someone, yet still feel a bit frightened at the prospect. I’d like to swim out to the deep water of the ocean again. And each time I stand on the shore of Lake Superior and look wistfully to its horizon, I think the same thing – not “oh how beautiful, look how huge” like others might think at the same view, but I want to jump in and swim out far. It’s too cold and dangerous for that, but the longing is still there.

I sense the beckoning of the Lord to go deeper with Him too. I don’t know why, but I hang back on the shore. Maybe because all my old ways and selfishness won’t be safe if I do jump in over my head. Maybe I want the safe rather than the exhilarating these days. I honestly don’t know.

But I can still hear that call, and with His help I will jump in and swim out past the breakers.  Out to the deep.  Hopefully soon, because I live in a dry and thirsty land.