For Kin and Kidney

I love the ways of God. I love His mercy and throw myself upon it daily. I love His works, and thrill when I see the patterns in the bark on a tree or the glittering stars on a dark night or smell a new, perfect baby.

I love His Word, and have spent over twenty years attending Community Bible Study and holding summer studies in my home because I marvel that He actually wrote letters to us so we could know Him better, know what to do, how to wait, repent, rejoice, pray, hope, trust.

I love God’s brilliance, the way He thought up and created so many species we can’t count them all, and how new ones are still being discovered. The way He designed the human body, how intelligent it is, what a masterpiece DNA is, how precisely atomic particles spin, how brain cells build new pathways and splintered bones reach toward each other and heal and how tongues taste and fingers feel and hearts pump oxygen and nutrients to every cell three billion times in a lifetime.

I love how God is bigger and more powerful than the universe, yet sets His sights on a pale blue dot that hangs in that vast cosmic expanse and beams His love at every person who dwells upon it, every person that has ever lived and ever will.

I love how He is the fearsome source of all energy, yet He bowed low and became a humble human being, to come be with us on this pale blue dot, to show us how to live and what the character of God is like, what real love is. I love that the Bible says Jesus fills the whole universe, yet if I, broken and lazy and prideful, welcome Him, He’ll keep company with me in my house on my little street near Lake Superior in Northeastern Minnesota.

I love how trustworthy He is, and how He takes wreckage and sorrow and seemingly hopeless situations and (in His time) creates something breathtaking and beautiful out of them. I have seen Him do this in my own life.

I love how when we are truly wicked sinners, He reaches down into our sewage pits to pull us out, to cleanse us, dress us, and put us on His High Road, to show us how to repent and change and rejoice and happily obey and bear with other peoples’ nonsense and meanness, with His empowering, and how lavish His forgiveness is for us.

I love that He doesn’t sugar coat our sin like we do, and that He’s the only one who can show me I’ve been a murderer, an unfaithful woman in a thousand ways, a thief, a liar, a proud and arrogant hypocrite, and so barren of mercy for others, yet because He tells me these things, I am not destroyed. I am hopeful and grateful, because He reveals these things to me so I’ll learn of His deep fathomless sea of mercy, dive into it and splash around even, so I’ll experience His infinite universe of patience, His Fatherly heart that cannot do evil to His children.

I love how He will work with me for as long as it takes, not for five years or for 500 sins or for fifteen seasons of rebellion. I love how God reveals Himself to us, especially if we’re seeking hard, but I also am comforted by the fact that He is a great mystery, and just because we don’t understand what we perceive to be His slowness or His indifference or silence, in no way means He is those things. I’m thankful we can’t figure Him all out.

When I was conceived by my parents, their marriage was in trouble. I was a surprise, and a kindly neighbor named Ruby Greener told me that my mother had sobbed over the fence when she learned she was pregnant, saying she could bear it better if she only knew it would be a girl. After two sons who were then fifteen and ten, she wanted a little girl.

God doesn’t share all His secrets, and one of the ones He kept until recently is that while He was knitting me together in my beautiful mother’s womb and forming my inmost parts (see Psalm 139), one of the kidneys He was making for me wouldn’t stay in my body forever, but would eventually be taken out decades later and given to someone else. He knit my kidneys for me, and for someone else. Just the thought of that makes me want to put my face on the floor and weep. I don’t know that other person’s name or anything about them, except that they are sick and have been waiting, maybe even praying, for news of an available, healthy B kidney, and they live in or near Madison, Wisconsin. But that is a secret of love our Heavenly Father has kept close to His heart for over sixty years, or perhaps even since before He laid the foundations of the earth.

Another one of His mind-boggling ways is that God knew that when I was growing up in Covina, California and was a whiny little brat biting the arm of my friend Jackie because she wouldn’t let me play the cashier first with the old adding machine in my garage, was that there was a dark-haired little boy in Long Beach, about a half an hour away, who would become a man and love and marry the daughter I would grow up to have, would help give me four of my eleven beloved grandchildren, would be one of the best behind-the-scenes servant-hearted men I know, and would suddenly, desperately need a kidney someday.

Two weeks ago I was called by a transplant coordinator at the Mayo Clinic in Rochester (about four hours south of us), asking if I was still willing to be part of their Paired Donation Program, because a kidney had finally, finally, become available for my son-in-law Chris. A much younger, super healthy kidney from a live donor. I said yes, and was flooded with peace and joy.

Chris needs a kidney from someone with the blood type O, and since I’m a B, I can’t give directly to him. So Mayo has several transplant coordinators that work this all out, from all over the country, and a recipient has also been found for me. Four of us will be in surgery on the same day.

Chris and I will be tested for COVID-19 on a Monday, at the Mayo Clinic. The results come in the next day, and if we are both negative, we will have many preoperative tests on Tuesday. I will undergo a donor nephrectomy early on a Wednesday next month, and my left kidney will be surgically removed, put on ice and flown to Madison, where my recipient will be waiting for a chance at a better life. Chris’s O donor, wherever he or she is, will have a kidney removed early on that same day, and that kidney will be flown to Mayo, and Chris will receive a transplant on Wednesday afternoon. He and I will be in the same hospital in the Mayo system — Rochester Methodist.

Barring any complications, I will be in the hospital for 2-3 nights, and then will be recuperating in an Airbnb I rented, and Lloyd will be with me. Other family members will be holding down the fort here at home. I have to stay in Rochester for 3-4 days, going in for daily testing to make sure my remaining right kidney is doing her job. Another of God’s marvelous ways is that the kidney I have left will enlarge and strengthen as time goes by. He planned for that when He was forming it in my mother’s womb.

Chris and Sharon and their family have also rented an Airbnb home because they need to be near Mayo for 4-6 weeks, as Chris will go in for daily checks to make sure the immuno-suppressant drugs he’ll take forever are tweaked to the perfect dosages, so his body doesn’t reject his new kidney. I will come home with my granddaughter Margaret by my side, who will be my assistant and helper for the couple of weeks of my recovery.

Here is a picture of Chris and Sharon, taken at Lloyd’s and my wedding last October: 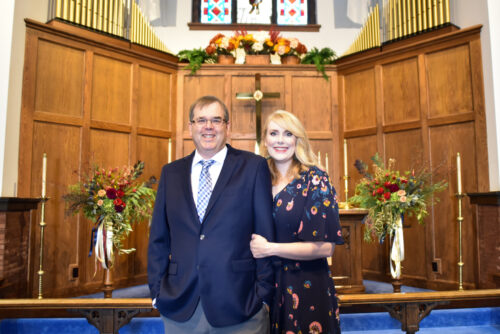 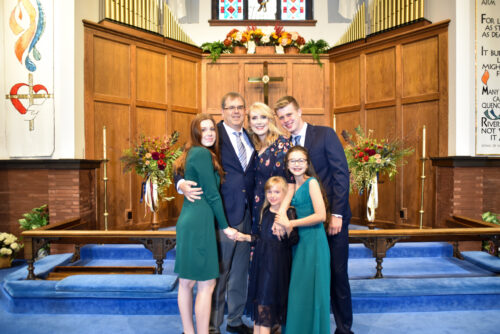 Will you join us in prayer for all the details of our surgeries coming up? Thank you, dear friends.

I will be updating things here as I can. I am surrounded by God’s peace, and want that for those I love as well.

For kin and kidney,