My city in northeastern Minnesota used to be known as The Air-Conditioned City because of the powerful cooling effect frigid Lake Superior has on the land and air around it. When I moved here from SoCal in 1981, the average summer temperature was 74º, but that can’t possibly be true anymore. The last few summers have been hot and humid, and this summer seems to take the cake for me. Being a humidiphobe means I look at what the dewpoint and temperature is supposed to be each day and into the coming week, and if the numbers are high, the dread creeps in. I become a hermit and don’t like to leave my house, which has air conditioning, which makes me functional. I’m very grateful for central air.

I have some friends who own ebikes, one for each member of their family, and they invited me to try one out. I did, and then spent about six weeks considering whether or not I should make a substantial purchase like that. I finally bought one online, and have been riding it in the mornings and evenings on the Lakewalk. It looks almost like a regular bicycle, but has a chargeable electric battery that provides “pedal assist” to help old people or unfit people or plump people or people with knee replacements (in other words, me) ride wherever they want without limitations. Duluth is a hilly city, and I would normally not try to ride up our steep streets heading away from the Lake, but now when I reach an incline that’s beyond my ability to pedal on my own, I turn the silent little throttle on my right handlebar and it gives me a smooth boost that gets me where I want to go. I can go over 50 miles on one charge, although I have yet to ride that far. 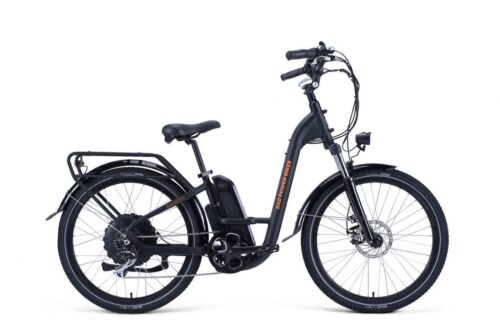 See the battery under the seat? It’s a powerful thing. If you’d like to know more about the company, it’s highly rated, has great customer service and their bikes aren’t the most expensive on the market…click here.

Sometimes I ride east on the Lakewalk, and a few miles from my house Lloyd spotted a bald eagles’ nest in a tall tree skirting some woods. I wish the picture I took was better than this, but I’ll share it anyway, because it’s awesome to see even if it’s blurry. I circled the triangular nest. If you look to the left of the nest on a bare tree, you can see one of the bald eagle parents perched. Lloyd and I have gotten as close as possible and taken binoculars, and the branches the birds used are almost as big around as my wrist.

We’ve seen the baby eagles sitting on the side of the nest, flapping their wings as they prepare to fledge. It takes my breath away. 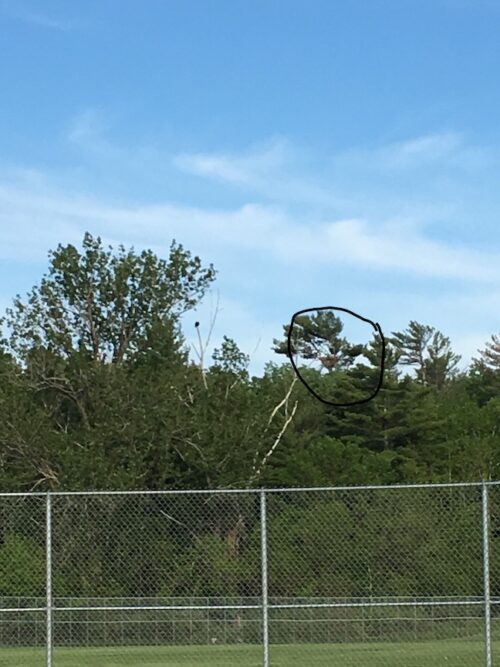 One morning when Lloyd and I walked as close as we could get to the nest, I took this picture with my iPhone: 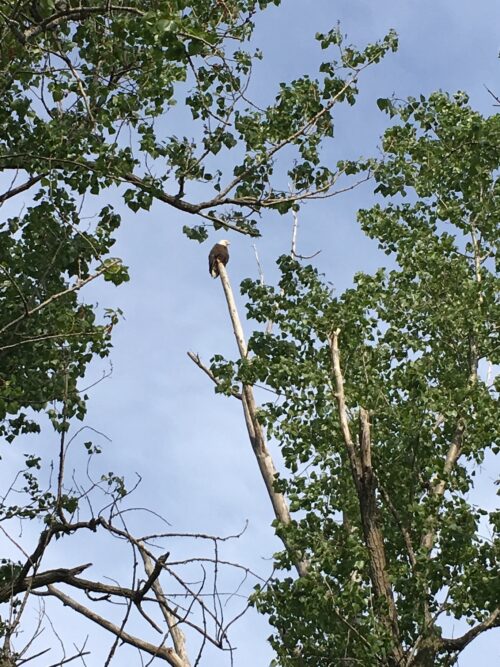 He watched us as we passed beneath, turning his head and following us with his piercing gaze. Eagles can see fish in the water from hundreds of feet in the air, so I’m sure he caught an eyeful of us. Maybe he could see the red blotches on my skin and the whiskers in Lloyd’s beard. Sharon has seen these eagles on her morning walks, and when it’s early enough, one of the parents flies out over the Lake, probably looking for a hefty salmon to bring back for his family’s breakfast.

If you’ve been a blog friend for long you know that each summer I host a Bible study in my home. We’ve done studies by Beth Moore, Priscilla Shirer, Margaret Feinberg, Mary Kassian, Lisa Harper, Corrie ten Boom. This year we are studying The Sermon on the Mount by Jen Wilkin and it’s beautiful and challenging. I crave the words of Jesus during this time when loud voices and violence have added to the division in our country. A group of us has been meeting for 15-16 years now, and this year we could not gather in the same way we always have. I’m so glad each woman said yes when I suggested meeting by Zoom. Every Tuesday morning we gather in a Zoom meeting room online, and thirteen of us get to see each others’ faces as we discuss what we’ve studied during the week. Then, instead of watching a video in my living room, I email the week’s video to everyone and we watch it at home.

Here’s a photo of my beloved Bible study friends on my computer: 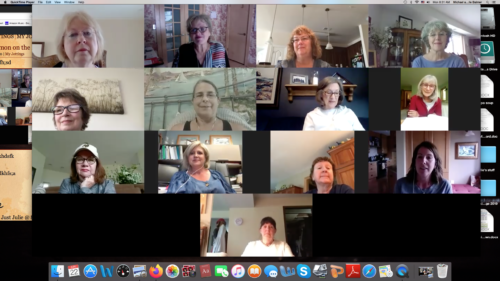 I am so blessed this year to be able to do this study with the childhood friend I’ve known the longest — Tauni. Tauni and I grew up in West Covina, California, just over the fence from each other. She still lives in SoCal (San Diego), but because of Zoom, she could take part. She has fit right in, and has been such a blessing to our group. From left to right, top row: Fiona, me, Sue D., Connie. Second row: Sue R., Tauni, Laurel, Dawn. Third row: Lana, Kay, Sharla, Kristi, and Deb is there underneath. I learn so much from these lovely women.

About two weeks ago my dishwasher stopped working. After talking with a repairman, I decided to buy a new one since mine is old enough that I didn’t want to plunk a few hundred dollars into it. I decided on my first Bosch (with a third rack – yay!) but apparently they are back ordered so we’ve been doing dishes by hand, which is what I did for years and don’t mind at all. Except that I tend to do it only when the sink gets full, so I’m slouchy about it. A few days later my washing machine stopped working, just like that. After talking with the repairman I decided not to replace the computer components of it, since it too is older and has been used almost daily for eight years. So I bought a new washing machine, my first LG. Lloyd and I humped it up many stairs into the house and he set it up for me. That was a relief. Then, my iMac desktop decided one afternoon to give me the Black Screen of Death, after having been fine for seven years. The AppleCare tech on the phone led me through a series of things to try, but the hard drive seemed to have disappeared — not a good sign when one has reams of important foster care paperwork stored on that hard drive. The nearest Apple store is three hours away, so I drove to Minnetonka to have it repaired, and the hard drive was shot. What?!?! I did have an external hard drive that had successfully backed up on June 26th, so when I got home WITH MY NEW COMPUTER I was able to migrate all my documents over. Except, my old Microsoft version wasn’t compatible with my new computer, so I had to go online and buy the latest Microsoft suite so I can read and access all my Word docs. Yes. And then my printer decided to not work anymore at all, and I had to order a new one. Mine was a good workhorse and I got my money’s worth out of it, but still. And then my iPhone began to die just a few days ago. It’s old, so it’s not a terrible surprise, but the timing of all of this was a little daunting. Almost laughable. I realize these are all first-world problems and I’m not complaining, just sharing.  🙂

Lloyd and I finished watching the series Endeavour and are now into Shetland. It makes me want to drop everything and head to the Shetland Islands, or at least to the north of the Scottish mainland. I’ll bet it’s not 92º and steamy as a sauna in Scotland. I’ll bet my dishwasher, washing machine, computer, printer and phone wouldn’t have broken if I were in Scotland.

I hope you’re doing whatever it takes to keep yourself and your family healthy these days. And I pray that Jesus will be your joy and comfort and help.