Because He Picked Up a Pen

In 1976 I had been married for less than a year when my Air Force husband and I moved out of our trailer on the banks of the Yuba River in Smartville, California, which is in the foothills of the Sierra Nevada. We moved into a three-bedroom house on Beale AFB — the address was 4093 Terrace Drive and we were just beginning our life together. I was eighteen and Glenn was twenty-one.

I was so happy to be a homemaker. I kept a fairly tidy house (unlike how I’d kept my bedroom growing up on Eckerman Avenue in West Covina, much to my mother’s occasional consternation), I liked to cook, and made a lot of recipes from the Better Homes and Gardens cookbook called Cooking for Two my mother had given me for my hope chest. I still make the little meatballs recipe to this day, along with the homemade barbecue sauce in the book. I also used to make Cornish game hens stuffed with mushroom rice quite a bit.

One day while my husband was at work on the base, two little girls knocked on the sliding glass window in the dining room of our base home. They were nine and seven years old, and introduced themselves as Celeste and Kathleen. Their father was a Senior Master Sergeant and their family lived around the corner and down a few houses. I was so taken with these beautiful, kind-hearted little girls. I looked forward to their visits and one time even invited them in to bake cookies with me. Those were the days when things like this could happen without a care. Celeste and Kathleen soon introduced me to their mother Yvonne, who became a fast friend despite our thirteen year age difference.

Yvonne taught me a lot about prayer during the two years we lived in the same neighborhood. When I gave birth at Hospital Beale to my first daughter, Yvonne came minutes afterward and joined me in marveling over such a miracle. I always cherished how easily she would shed tears of joy, and she certainly did on that day.

As happens with military families, goodbyes always come. The Laynes went to other assignments, including Minot, North Dakota. Glenn and I lived in a little German village called Damflos, not far from the Luxembourg border, and our second daughter was born at Landstuhl Army Hospital. Over the years Yvonne and I wrote letters to each other, and I was glad to receive her Christmas cards with the newest school photos of their four children, Mark, Celeste, Kathleen and Jenifer. Once Frank retired from the Air Force, the Laynes bought a home in Duluth, MN, where Yvonne had been born and raised.

When my little girls were two years old and nine months old, our lives took an unexpected turn when my husband of four years struck out on a different path. I found myself suddenly uprooted, with eleven pieces of luggage (high chair, suitcases, and several densely packed household boxes), two exhausted little ones, three passports, a diaper bag and a purse, flying from airport to airport so we could go home to Southern California to heal and begin anew. We flew from Frankfurt to McGuire AFB in New Jersey, to Charleston AFB in South Carolina, to the civilian airport in Charleston, where we had an eight hour layover. From there we flew to Atlanta, Georgia where we had another layover, and then flew to Los Angeles. Our journey took exactly twenty-four hours.

After a difficult six months I felt stable enough to look for a job and was blessed with a good one in Anaheim. I was thankful, but working full-time while a nanny cared for my children was not the horizon I had hopefully scanned when Glenn and I stood at the altar. We got a nice two-bedroom apartment, visited Disneyland when we could, drove to the beach, and read lots of books.

One day I came home from work from the private investigating company on Brookhurst Avenue and stopped at the mailboxes to grab my mail. The one envelope that caught my attention was one addressed to me by hand. The postmark was from Duluth, MN, but that did not ring a bell in my mind. I truly had no knowledge of Minnesota, and because Frank and Yvonne had moved around with the Air Force, it hadn’t registered that this had been where they might retire.

I climbed the outside stone stairs to my second floor apartment, greeted my little ones and Gwynne, their nanny who lived with us during the week, and sat down to go through the mail. Of course I had to open the mysterious hand-written letter first — it was from an M. Balmer. Michael introduced himself and took several pages to tell me all about his life. On the first page I learned that he was Yvonne’s nephew, and she had given him my name and address a year and a half before. I vaguely remembered that after I flew home from Germany and was staying at my mom’s, Yvonne and I spoke on the phone once, me in tears and she with her compassionate tears and kindness coming through the receiver, and she mentioned having a nephew who was going through something similar to me. Just hearing the word “nephew” conjured up something undesirable in my mind and I wasn’t interested in the least. I was hoping my marriage might be restored and was focusing on that.

But since Michael didn’t seem to be fishing for a relationship in his letter, and instead was telling me how the Lord was seeing him through an unwanted divorce, and he spoke so genuinely about his faith in Christ, I felt relatively safe, and wrote back. We exchanged handwritten letters (they were the only kind back in 1981) for a few weeks and then he called me. Our conversations on the phone were easy and grew to be lengthy. I was so drawn to his love for Christ, who had delivered him from many hardships and a few foolish decisions. After about six weeks, I received a letter from Michael declaring his feelings for me, and I felt my heart melting as well. He asked me to marry him before we had ever met, and I accepted. I did not have enough faith to just set a date and marry him the first time we were together, however. I bought a plane ticket for Minneapolis, arranged for Sharon and Carolyn to stay with my friend Diane, and flew north to meet the Balmer/Nesgoda clan.

I spent a few days in Duluth, gasped when I first saw Lake Superior since it looked vast as an ocean, basked in the welcoming love of Michael’s aunts and uncles and cousins, hugged his sweet daughters Buffy and Daphne, and gulped when I met his mother Bernie who said when she saw me, “Oh! You look just like the Blessed Virgin!” Michael and I set a wedding date and I flew back to Anaheim to get ready to move. I gave notice at my job, packed up my belongings, and after Michael arrived in late June, we were married in a small ceremony attended by my parents, brothers and a few dear friends. Michael, Sharon, Carolyn and I made the long drive north and east in two vehicles — a rented moving truck and my green VW Rabbit. We had known each other a little longer than three months. It took about a week before Sharon and Carolyn began to call Michael Daddy.

In less than a year Michael and I had a daughter together, Sara Yvonne, and yes, Yvonne attended our home birth and cried when we told her Sara’s middle name.

The years passed, as they do. I home-schooled my three daughters. We bought an old Victorian house in a neighborhood we loved and Michael transformed it over the course of twenty years. We certainly had our ups and downs, but two things I never questioned: Michael’s love for me, and his love and devotion to Jesus. He was never ashamed of either one of us, and showed it outwardly, often.

There is so much more to this story of course, but much of this blog already contains those accounts. What is on my mind today is how many people have come to be, how many friends have blessed and loved us, how much beauty has appeared in our lives because Celeste and Kathleen came to my door, and because of that, eventually Michael picked up a pen. My name and address had been in his wallet and he only came upon them when he was going through his old fishing licenses and cleaning up his wallet. He wrote to me on a whim of sorts. Because of all this, actual human beings of inestimable value have come into existence. Our daughter Sara. My grandchildren Clara, Cullen, Elijah, Eleanor, Vivienne, Margaret, Audrey, Louisa, Miriam, Hannah, Levi, and now a little girl who is still growing inside her mama. Because of all this, I have my own home and can see that breathtaking Lake Superior from my windows every day. Because of all this, my dear friend Su lives minutes away because she wanted to move to Minnesota too. Because of all this, I have a life in one of the most gorgeous places on earth, get to look into the actual eyes of my beloved daughters and granddaughters, and know who I am and where I belong. And because of two little girls who knocked and a man who picked up a pen, I have two sons-in-law that are as dear to me as if they were my own flesh and blood.

Also because of all this, I was able to be married to Michael for over thirty-three years, and be with him as he took his final breath after suffering with Parkinson’s and Lewy Body Dementia for too long. I was able to experience the faithfulness of God in times I thought I wouldn’t survive.

Here is the wreath Sara made for Michael’s grave this winter: 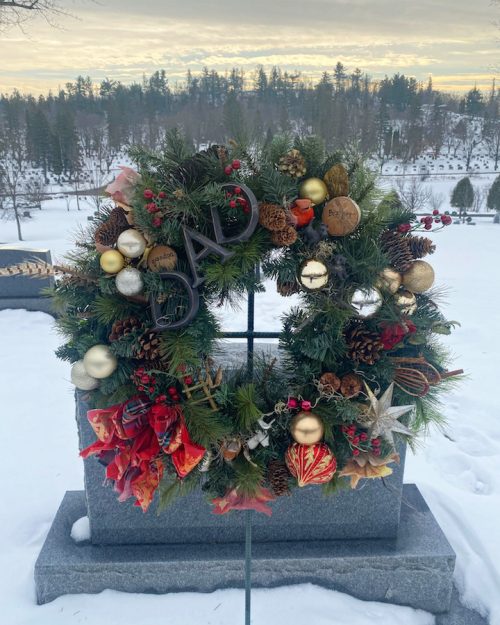 It has been almost eight years since Michael went to heaven, and I have said before that I don’t view each day as getting further away from him, I look at each day as one more step to being able to see him again. The first year after his death was one I hardly have words for, but God was with me. Emmanuel… God with us.

Because of Celeste and Kathleen knocking and Michael picking up a pen to write to me, I am now remarried, to another lifelong Minnesotan who also lost his wife.

I am sixty-five years old now, the age Michael was when he died. I’m glad the Lord can read my heart, because the words my mind can come up with are much too feeble to express the wonder I sometimes feel because I live here in Northeastern Minnesota, have three precious daughters and a bundle of grandchildren (ages 20 to almost-born).

I think of dear Celeste and Kathleen who are grandmothers themselves now, and their wonderful, godly mother Yvonne, and Yvonne’s nephew Michael in Minnesota, and how he picked up a pen to write to a fragile young woman he didn’t know in California, and how the Lord mercifully brought so much from that.

I hope your Christmas was peaceful, and that hope infuses your life in 2023.