We have had a long stretch of such achingly cold weather. I’m a homebody, so I usually love winter, but this has really been getting to me. For days upon end, it has been way below zero at night, and mostly not even above zero during the day. If you live where Celsius readings are used, we’ve been between -16 degrees to -40 degrees in some areas north of us. Or for those used to Fahrenheit, we’ve been seeing the thermometer go between -2 degrees to -46 in some areas north of us. This morning, it was 38 degrees below zero at Lloyd’s cabin about fifty miles from me. Twenty-two below here. I know that so much of the country is experiencing snow and cold. 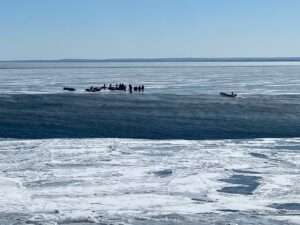 Last week a bunch of ice fishermen were sitting out on the ice of Lake Superior, when a crack in the ice formed. The wind blew the thin ice floe they were on further out into the huge lake, away from shore. Emergency crews with boats were called, and a couple dozen people were rescued, but all their ice houses, augers, sonar depth trackers and tackle stayed on that ice floe. (Photo credit Minneapolis Star Tribune).

Over the next few days people reported seeing a lot of it sink into the lake, and some of the anglers interviewed said they’d lost hundreds of dollars worth of equipment. I never understood the desire to walk out onto a frozen lake you’re not sure is stable, set up a tent, drill a hole, and sit in the frigid cold hoping a fish would take your hook. When you compare that with a pot of soup simmering on the stove, some soft music playing, a fire in the hearth and a good book in hand, how is that not obvious which setting is best?

Rather than taking up ice fishing, my three daughters Sharon, Carolyn and Sara and I have been taking a Fundamentals of Drawing class at Great Lakes Academy of Fine Art. It’s on Monday nights, but if it’s 25 below zero on that Monday night, it’s a little hard to go. We are learning how to draw in the most exacting and detailed way, and it has been so challenging and yet so soothing. Here are my three beloveds at their easels. 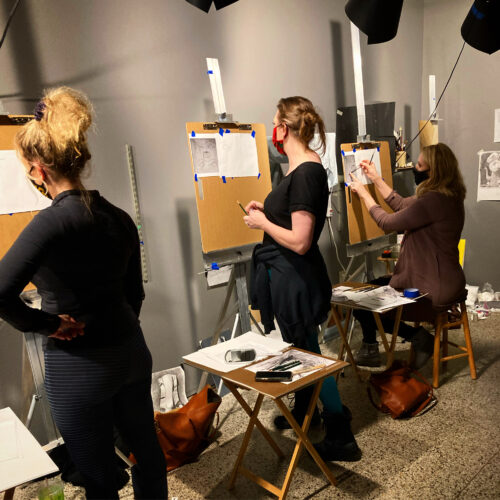 We have drawn facial profiles, feet, hands, and lips. And it takes me two hours to draw one thing exactly as the example shows, and even at the end of that two hours, mine still needs refining.

The instructor is teaching us to “see” dark and light, lines of demarcation, volume, envelopes, and weight. Soft music plays while seven of us work silently on our drawings. Some have taken the class before and have moved on to painting, and I hope our occasional giggles aren’t disrupting the otherwise very zen feel to the atmosphere.

Here is one of my drawings. The part on the left is what I’m trying to draw; the four faces on the right are what I ended up with after much drawing, erasing, stepping back, changing glasses, breathing deeply. 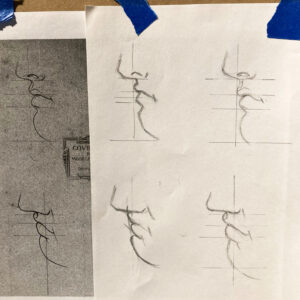 The guidelines we’re allowed to draw to help us get things right are very helpful. I’m afraid if I have to stop drawing horizontal and vertical lines I will never be able to draw.

I would say Carolyn is the best artist among us. Sara is also very artistic but likes to paint more freestyle. Sharon is so creative but she resorts to drawing narwhals and orcas toward the end of the classes for some comic relief.

It has been nice to be side by side with my daughters doing something new. 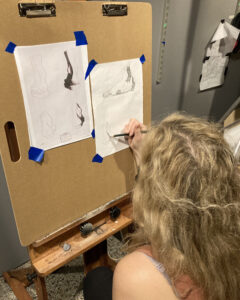 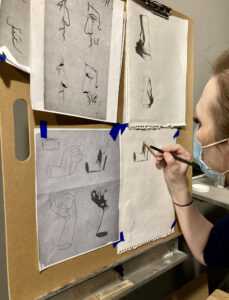 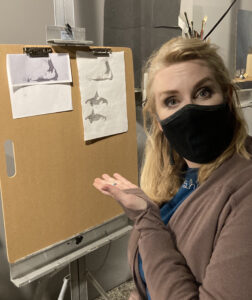 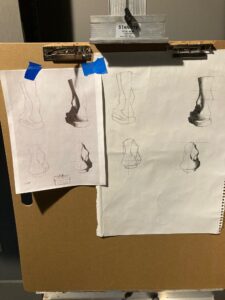 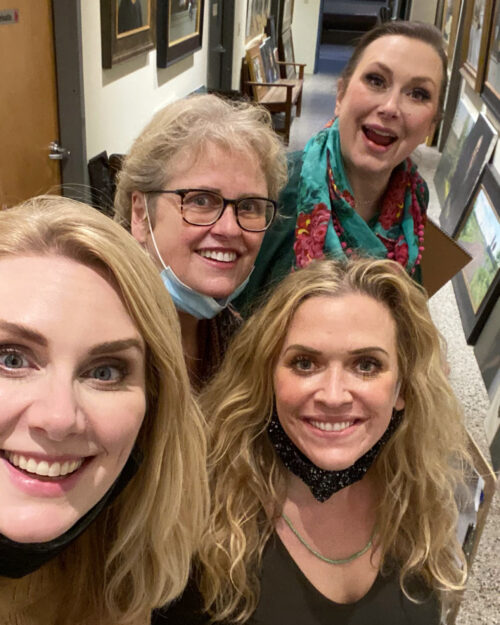 Have a peaceful week,