It has been six years since Michael left this earth. At the very time of this writing, six years ago I was waiting for the funeral home to come pick up the body of the man I had known and loved for over 33 years. His suffering from Agent Orange-induced Parkinson’s and Lewy Body Dementia was cruel. But he bore it with a patience and a submission to the Lord that still inspires me today, and makes me want to be like that.

I miss Michael’s grin, his huge, kind eyes. His rough hands, rubbing my ankles or clasped in prayer. 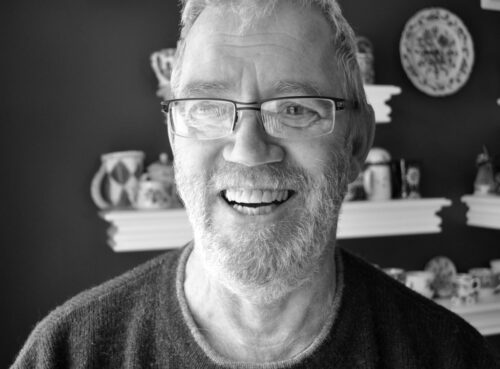 I miss how no project was too tough for him. He was willing to work at anything, and he threw his whole body and soul into whatever he was doing. Without ever complaining. Not one word of complaint in over 33 years, even if it was an outside job in 10 degrees below zero weather. That in itself is astounding.

I miss how when something really struck him as hilarious, he laughed so hard he shook silently and tears same out of the corners of his eyes. He laughed at himself, and wasn’t too proud to do something silly to make us howl.

I miss how animals instinctively knew he was trustworthy and gentle. He was a bird-whisperer, for sure.

I miss and admire his heart for the underdog, how all people had the same value in his eyes, and how he never thought he was above anyone else.

His lack of self-absorption was quite refreshing. He never wanted the spotlight and didn’t care a lot about what others thought of him.

Michael asked me to marry him before we ever met. He pursued me across the miles between Duluth, MN and Anaheim, CA, by writing letters and calling me for hours-long conversations every day for three months. Like most couples, we had some bumps in our road, but oh, what blessings have come to my life because Michael was mine, and I was his. I could write pages and chapters, maybe books, about the ways my life continues to be blessed because of my Michael.

I rarely stand in line at a grocery store without thinking of Michael. For some reason, he always thought waiting in line with our cart was a good place to wrap both arms around me in a big hug, plant a kiss on my cheek and whisper an I love you into my ear.

He became aware of the love of Jesus for him when he was thirty years old, dove headlong into that ocean, and never came out to dry off.

I’m so thankful for his beautiful life, and the unlikely way the Lord brought us together. Even though six years have passed and I’m happily remarried now, I don’t ever feel like I’m moving further and further away from Michael. On the contrary, I feel like each day brings me closer to him again, and thoughts of what he might be doing in heaven make me smile and yearn.

Friend, if you are reading this today, did you know Michael? What do you remember about him?