(Reposted from the archives….)

My Grandma Oma didn’t like me much. Oh, she tolerated me well enough when we first met. I was three years old, and she and Grandpa Bud had just moved to Southern California from their Hereford cattle farm in Kansas. My parents were happy about my grandparents moving to our town in SoCal so we kids could get to know them. But as I grew older, my maternal Grandma seemed increasingly distant and sometimes even disgusted with me. She thought I was a spoiled little girl; too mouthy, too whiny and demanding.

When I was very young I used to climb up in my Grandma’s generous lap and she would lightly scratch my back while we watched TV on Sunday nights after dinner. She wasn’t critical of me then and I relished those times. She would rock the chair back and forth and I would be very quiet. I thought I could feel her love for me then.

But before long I’d taken too many cookies out of her cookie jar or sassed my mother or turned the TV channels too fast, and she’d knit her brows and purse her lips in disapproval. I’d hear her mutter under her breath to my grandpa, “That child is spoiled rotten!”

Despite my suspicion that Grandma didn’t care for me a great deal and thought I was “too big for my britches,” I enjoyed going to her house. It was small with a good-sized yard and there were lots of interesting things for a young girl to investigate. There was Mr. Clean, their canary who used his cage water dish for a bath several times a day, there were richly upholstered rocking chairs where I loved to curl up and read, and intricately crocheted afghans and lacy doilies. I loved to walk through the rooms and study the different treasures: a Japanese music box that played a mournful tune when I lifted the lid (“Julie, you’re going to wear that thing out!”), a massive Drexel mahogany bedroom set that Grandpa polished to such a shine I could see my reflection in it (“Don’t get your fingerprints on that dresser!”), and a beautiful nightstand lamp that had three settings. I used to sit in my grandparents’ room and slowly turn that lamp on and off, on and off. It was delicate and old, with two milky globes, one at the top and one on the base, and I loved how it could give bright, medium, or very soft light when the key-like switch was turned. But then I’d hear Grandma’s footsteps coming down the hall and she would scold, “Julie, you are going to break my nice lamp, now stop fooling with it! Go outside and play.”

Years passed and by the time I was sixteen Grandma’s feelings for me hadn’t seemed to change much. Even though I wasn’t the juvenile delinquent she felt certain I would turn out to be, she seemed to merely put up with me. In fact, I thought she was more disappointed in me than ever. I never seemed to be able to win her affection. I drove too fast, was away from home too much (“always out gallivanting around”) and spent too much time running with my friends, she thought. I was resigned to the fact that Grandma would always think I was a disappointment as a granddaughter, and I just went on with my own life that by this time consisted of cheerleading, working part time, keeping up with my studies, and spending time with friends at the beach.

In early 1974 Grandpa had a stroke and several months later he died. Grandma was lost without him. She moved in with us and I could tell she was unhappy about losing her independence. She spent her days cooking and helping around the house and her nights sitting in a chair watching TV. She particularly loved “The Lawrence Welk Show” on Saturday nights, and sometimes as I was getting ready to go out with friends I noticed that Grandma would gently tap her foot to the music as Bobby and Cissy danced, or as Guy and Ralna sang a peppy duet. I would roll my eyes and heave a teenaged sigh. I hated “The Lawrence Welk” show. It was certainly not my generation’s style of music and it was just another thing that Grandma and I did not have in common.

One day as my grandma sat dozing in her chair, I studied her, and a pang of regret assailed me. I wondered what had happened to us. Why had we never really been able to bond as a grandmother and granddaughter should? Why wasn’t she able to reach out and love me, shortcomings and all? She was 73, and as I watched her it dawned on me that if anyone was going to change, it was going to have to be me.

The following week I had an idea and told Grandma to be ready for an all-day outing with me on Saturday. She looked surprised and irritated. She questioned me about what kind of an outing I was talking about, but I refused to give her details. “Oh, you’ll see, Grandma. You and I are going to have a wonderful time together!” I assured her. We had never done anything together and I’m certain she was wary and curious about what I had up my sleeve. But she didn’t say she wouldn’t go with me.

Saturday arrived and I helped Grandma into the car. I was shocked that she actually allowed me to good-naturedly blindfold her to keep our route and destination a secret. Her mood was light as we drove along the southern California freeway system and I inwardly rejoiced that she was willing to go along with my little plan.

When we arrived at the entrance of Disneyland, I removed her blindfold and fluffed her snowy hair. It took a moment for her to focus her eyes and realize where we were. “Well I never!” she sputtered. Grandma had never been to Disneyland and I thought it was something she needed to experience. 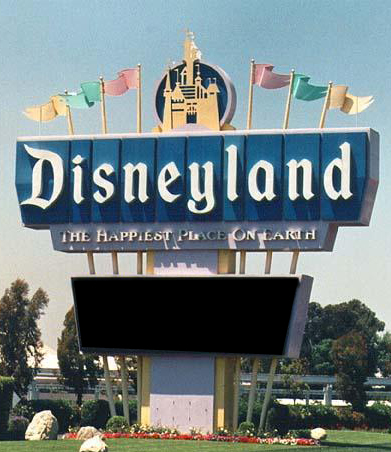 “How in the world am I going to walk around this big place?” she asked testily. “Not to worry,” I responded. “I’ll push you in a wheelchair up to each ride. I’ll help you board the rides with me and then we’ll put you back in the chair when the ride is over.” Much to my amazement and relief, Grandma didn’t resist.

We spent the entire day exploring the famous park, going on the tamer rides, watching shows, shopping, laughing. Yes, laughing. I pushed her all over that place until dusk, when, exhausted, we made the forty-minute drive home. Before we went to bed that night Grandma looked directly into my eyes and said earnestly, “Thank you, Julie. This was a wonderful day.”

Soon after that I took her on another outing and she again submitted to my silly blindfold idea so I could keep her in the dark and totally surprised until we reached our destination: Grauman’s Chinese Theater in Hollywood, where we saw the movie Earthquake. Even though she had lived in Southern California for many years, she had never been to Hollywood, never been in a theater like this one. All the way home Grandma marveled about what a nice time we’d had.

Grandma Oma and I gradually became closer after that. Our conversations were light and we even laughed together. I talked to her about my friends and school, asked her questions about her childhood and how to cook and bake, and what she was interested in. I asked her questions about my  Grandpa – she loved to talk about him. I found that she had a lot to share. I felt like I was getting acquainted with my Grandma for the first time. And little by little, she was definitely warming up to me.

I started sitting with her on Saturday nights as she watched “The Lawrence Welk Show.” She told me all about the people on the show as if they were old friends of hers. I learned to enjoy watching Arthur Duncan tap-dance and even tried to imitate him in front of Grandma, making her chuckle. We listened to Norma Zimmer and Larry Hooper sing, and to Myron Floren play his accordion. I learned songs I had never known before and I actually liked them. Most of all, I was learning to appreciate my Grandma, and I think she was learning to love me.

My Grandma Oma died in 1982. Her gleaming mahogany bedroom set sits in our master bedroom today. I treasure it. I also have her beautiful lamp, but about a year ago I accidentally bumped it and it crashed to the ground, shattering the top globe. I try not to hold too tightly to material things, but I was sad about this lamp breaking because it had been such a part of my childhood. I stared at the pieces on the floor and memories came flooding back, of me as a little girl exploring and dreaming, and turning that lamp at Grandma’s house on and off, on and off.

The memory of my Grandma’s “off” years of seeming indifference to me isn’t painful anymore and I don’t question why things were as they were. Instead I have the remembrance of our few “on” years together — how I believe God helped Grandma and me do what neither one of us knew how to do on our own — begin a loving relationship and make a real connection with each other for the first time in years.

Now I’m a grandma myself, albeit a few years younger than my grandmother’s age in this account. Only heaven knows what my grandchildren will remember about me when I’m just a fading memory to them, but I’m determined that they will never have to wonder if I loved them. They know already that my heart is nearly bursting with love for them all.

And all these years later, Lawrence Welk is still in the picture. My seven year-old granddaughter Clara loves to watch that old show with me when she spends the night on the occasional Saturday. She thinks it’s called “The Loren Swelk Show”, and I’m not in any hurry to tell her otherwise. As we sit and watch Bobby and Cissy, Guy and Ralna, Arthur Duncan, Tom Netherton and all the others, I sometimes think about my own Grandma Oma, and I’m thankful for those few pleasant memories we made.

And I say a silent prayer asking God to help me make lots and lots and lots of precious memories with my seven wonderful grandchildren.

I know this is one of the reasons I’m alive.