When love is blocked

Yesterday I went to my Community Bible Study class and came home so grateful for all it has meant in my life. If I could stand out on a corner (like they do on election days) waving and smiling at people as they drive by, and holding a sign that says, “Community Bible Study today — you should try it!” and I thought it would bring one person to CBS, I might do it.

CBS gives me more than church ever has, and I’m not in any way denigrating church. The deep, personal study of God’s Word, challenging, practical questions that help me see that what Isaiah (the book we’re studying this year) had to say has everything to do with my life today, the joy of getting to know women of all ages in a quiet, non-threatening setting, gleaning from each other in our core group discussions, and the nuggets of truth we take home from the short lecture that sums everything up — this is what nourishes me week after week, year after year. I’ve been going to CBS nineteen years now, which means I started in my thirties, went through my forties, and have continued on into my fifties. If the Lord should give me many more years on earth, I hope I can journey through my sixties and seventies in Community Bible Study. I’m hoping to be in heaven before I see my eighties, though. Here’s a little video with a few people saying what CBS has meant to them.

My next door neighbor Martha invited me over for tea yesterday after I got home from CBS, and we had a nice visit. She’s a very young sixty-nine years old, and is also a widow. We trade books, chat about our lives and hopes, and I (yes I did) invited her to Community Bible Study. She has another commitment on Tuesdays but said if it ever changed, she would come to CBS with me. I showed Martha how to use her DVR then came home to make a dinner I’d planned with ingredients I knew I had in the house, except after I got the meat prepared I realized the main ingredients I thought I had were gone. You can’t make a taco casserole without tortillas and cheese and chilies, in my opinion. So I improvised and no one died.

Tonight we’ll go out to dinner to celebrate the fiftieth birthday of one of my foster gals. Each year on my fosters’ birthdays they choose which restaurant they prefer, and their parents and friends are invited, and it’s usually a fun time for all. Since dogsledding last Sunday was a total blast, having a nice dinner out will be the icing on the cake for our gal’s BD, and I know she will talk about it happily for a long time to come.

Did you watch the last episode of Downton Abbey? Sara and I did, and we were so happy about most of the endings the characters were given. I was thrilled for Edith and quite inwardly smug that she was going to outrank Mary (and her whole family) after being mistreated by her sister for most of her life. I was not a great fan of Edith’s new husband Bertie, but that’s okay. I also loved Mr. Mason’s veiled assurance to Mrs. Patmore that romantic things were ahead for them. Yesss! And when Barrow was given the position of head butler because Mr. Carson had to step down due to his palsy (Parkinson’s disease), I teared up. Somehow I believed that the new page Barrow was attempting to turn in his life would cause him to treat Mr. Carson with much more kindness than he was ever given. And all those Happy New Year kisses at the end, with Mrs. Hughes/Carson starting them all off singing “Auld Lang Syne?” So wonderful. If you watched, what did you think? Did anything surprise you or delight you? Would you have written someone’s ending another way? I read online that someone said, “We’re all a little Downton in the dumps today, since the show is over.” Indeed, I thought, what in the world will I ever watch now?

I’m about half way through my fourth reading of The Hiding Place, and I’m going to share a quote with you that was so wise and powerful, so painfully beautiful to me. Corrie ten Boom fell in love once in her life, with a young Dutch man named Karel. They talked of marriage, what kind of house they’d like to live in, and their relationship was innocent and tender and full of hope for Corrie. But Karel’s parents had intended for him to “marry well” and he was going to do what they wished. So when (insensitive) Karel came to the ten Boom door one day with his new fiancee on his arm, introducing her to Corrie and the rest of her family, she was devastated. Here are her words:

“Somehow the half-hour passed. Somehow I managed to shake her hand, then Karel’s hand, and to wish them every happiness. Betsie took them down to the door. Before it clicked shut, I was fleeing up the stairs to my own room at the top of the house where the tears would come.

“How long I lay on my bed sobbing for the one love of my life I do not know. Later, I heard Father’s footsteps coming up the stairs. For a moment I was a little girl again, waiting for him to tuck the blankets tight. But this was a hurt that no blanket could shut out, and suddenly I was afraid of what Father would say. Afraid he would say, ‘There’ll be someone else soon,’ and that forever afterward this untruth would lie between us. For in some deep part of me I knew already that there would not–soon or ever–be anyone else.

“The sweet cigar-smell came into the room with Father. And of course he did not say the false, idle words.

“‘Corrie,’ he began instead, ‘do you know what hurts so very much? It’s love. Love is the strongest force in the world, and when it is blocked that means pain.

“‘There are two things we can do when this happens. We can kill the love so that it stops hurting. But then of course part of us dies, too. Or, Corrie, we can ask God to open up another route for that love to travel.

“‘God loves Karel–even more than you do–and if you ask Him, He will give you His love for this man, a love nothing can prevent, nothing destroy. Whenever we cannot love in the old, human way, Corrie, God can give us the perfect way.’

“I did not know, as I listened to Father’s footsteps winding back down the stairs, that he had given me more than the key to this hard moment. I did not know that he had put into my hands the secret that would open far darker rooms than this–places where there was not, on a human level, anything to love at all.

“I was still in kindergarten in these matters of love. My task just then was to give up my feeling for Karel without giving up the joy and wonder that had grown with it. And so, that very hour, lying there on my bed, I whispered this enormous prayer:

“‘Lord, I give You the way I feel about Karel, my thoughts about our future–oh, You know! Everything! Give me Your way of seeing Karel instead. Help me to love him that way. That much.’

“And even as I said the words I fell asleep.”

If ever something called for a pause, this does.

Aside from being overcome by the beauty of this pure and shining truth, I began to ponder all the ways love is blocked. Or the ways that allow it to flow freely.

Pride blocks love. Divorce blocks love too. It dams it up for our children and sometimes only lets little trickles come through. War blocks love. Selfishness blocks love. Anger blocks it. And greed. And lying. Busyness blocks it too. Anything we do which is contrary to what God has designed, blocks perfect love. Sometimes I wonder how God, who IS love, bears it as He watches His people fumble along in their selfishness and sin, being impediments to His love instead of conduits. And I also wonder how His great smile looks when he finds someone trying to let that love flow to others, however feeble their attempts.

I thought about all the ways in which I’ve allowed love to be blocked in my life, and the ways I have blocked love in the lives of those I love, and of course the tears fell. In my own family of origin, all of us had this great capacity for love, I believe. Some of the wider channels for love to flow were the traits I saw in all of us…like generosity, words of affirmation, physical affection, time given to people in need, and a desire for God. 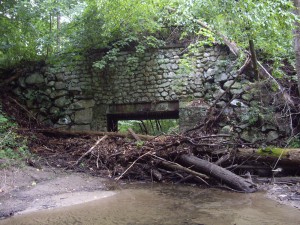 But the deep and wide channels God built into my family’s lives for His love to freely flow, were often clogged by the negative things mentioned above. And of course destruction followed. And the saddest thing of all is that many of those ancient familial channels are still clogged with sin’s debris. Dried up rivers full of pride and anger and arrogance and bitterness. And nothing will ever make those bone-dry channels flow with love again, apart from a colossal move of God.

Maybe this is why most everyone is so satisfied with the ending of Downton Abbey. Could it be that simple? Yes, we loved the clothes and the attention to detail and the glimpses into the lives of the English aristocracy, but we all just longed for love to flow for all of them. And I’m not talking about mere romantic love. I mean kindness and respect and deference and humility and reconciliation and selflessness. The love described in 1 Corinthians 13. There’s something innate in all of us, placed there by God, that yearns for love and good to flow unhindered, and we feel real, wrenching pain when that love is blocked.

Maybe one of the reasons I love CBS so much is that God’s love flows freely there. His love for His people pours from His Word right into our hearts. We learn to love each other in our core groups, many of us experiencing a “debris removal” as we sit around His Word week after week.

I think Casper ten Boom’s words of truth and comfort to his grieving daughter Corrie ring out with a beauty that pierces the heart. Certainly God used them to help equip her for the the extraordinary future He had planned for her.

When love is blocked, it brings such pain.

When God’s love is allowed to surge through our lives, joy and hope and strength come.

These are just some of my fragmented thoughts today. I’m praying that God will forgive and remove the sin that clogs my life. I want to love, but often look back at a situation and see I’ve missed it.

Community Bible Study and Corrie ten Boom’s story are making way in my life, I pray.

“Let the one who believes in me drink. Just as the scripture says, ‘From within him will flow rivers of living water.'”   –John 7:38