Cooking, Cataracts, Corrie and the Circus

Every Friday, one of my foster gals crows, “TGIF! Thank God it’s Friday!” and we all heartily join in with her. I like Fridays too. I have a nice day planned and I hope you do as well.

You might never guess by the sun streaming into the windows on the front of our house that a big snowstorm is making its way toward us. Beginning around noon, we’re supposed to get up to three inches today, and I guess this might be our “March comes in like a lion” storm. I told Vivienne and Audrey yesterday while I was driving them home from school that March comes in like a lion and goes out like a lamb and suddenly there was quiet in the back seat as they both contemplated what the heck Grandma was talking about.

I’ll be driving out into the country today to have lunch at my friend Lana’s new house. She and her husband John have retired to a lake home and I haven’t seen it yet. I have no idea what she’s preparing (except she knows I am not a tuna or lima bean fan) but I know it will be a restful, refreshing time. That’s the way Lana is. Have you ever met anyone whose presence and home and way of speaking and listening ushers you into a state of calm and grace? Aren’t they wonderful people? Lana is like that.

I tried to watch part of the Republican debate last night and was able to endure about five minutes. I have no idea why I subjected myself to even that amount of time. I guess I’m just hoping I’ll eventually see some respect, humility, reasonable ideas, dignity and true leadership. Those who had any of that to offer have already dropped out of the race, and what we have left are supposed Christians who are now reduced to talking about genital size and yoga. It’s like a political circus and I keep waiting for the lady on the trapeze to swing down from overhead or the clown to drive up in his mini-car, honking his horn, while this music plays. This American presidential election is an embarrassment, and it makes me feel sad. It makes me wish I could be an expat and buy a little cottage in the Highlands of Scotland and move. I sound like a traitor saying that probably, but I guess all of us have said things out of discouragement at one time or another. 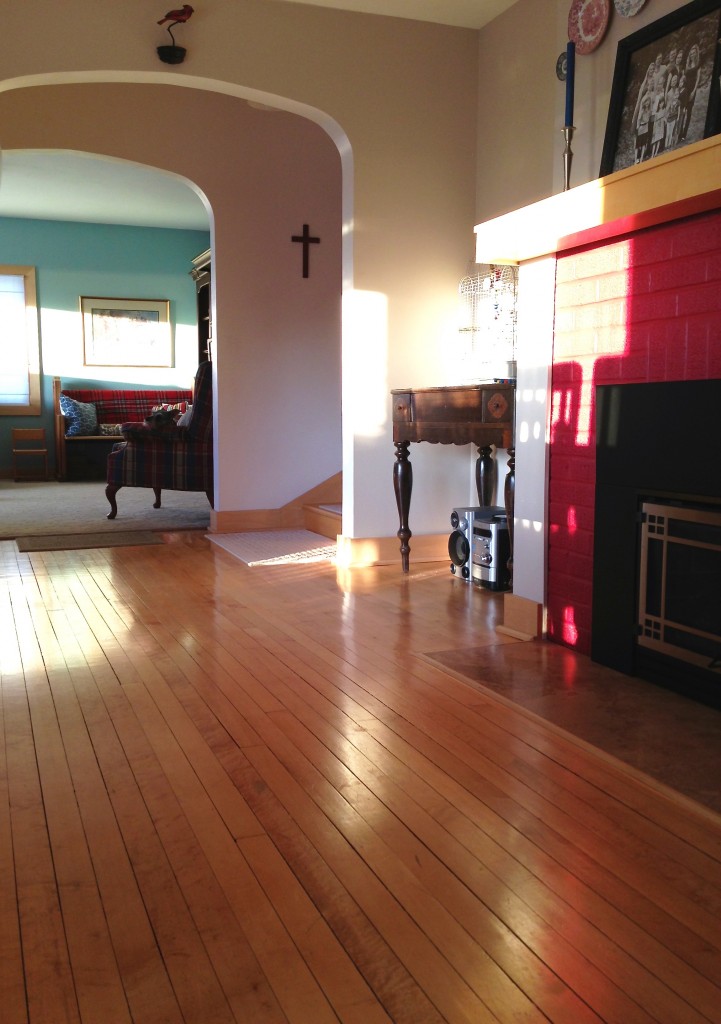 A breath of fresh air in all of this is the book I’m reading right now. I’ve read it twice before years ago, but I’ve picked up the newest edition (with new photos) of The Hiding Place by Corrie ten Boom. Oh, there’s such beauty in that book. True, elevating, aching beauty, that inspires me to pray and praise and repent. If you have never read The Hiding Place or haven’t read it in years, I encourage you to pick it up again. It seems more appropriate than ever, with all that’s going on in our world.

We’ve been eating delicious soup for two nights now. My friend Carey is a wonderful cook and baker who actually enjoys it. I like to cook and bake if I’m having company, but it has become something I don’t look forward to as much as I used to. Maybe I miss Michael’s oohs and aahs of appreciation when I used to cook for him. Anyway, Carey comes over every couple of weeks after Community Bible Study, and cooks a big pot of whatever I ask her to make. While she cheerfully chops and stirs, I sit at the dining room table and catch up on my piles of paperwork, and we chat. And laugh, and cry. And then I have at least three nights of dinner to serve to my happy campers that I don’t have to make myself, and is truly better than any restaurant fare.

I asked Carey to make a recipe from America’s Test Kitchen recently, and it was definitely moanworthy. Wild Rice and Mushroom Soup, with a variety of fresh mushrooms, Minnesota wild rice, chives, a bit of tomato paste in the rich broth. Here’s a photo from the ATK website, and ours looked just like it: 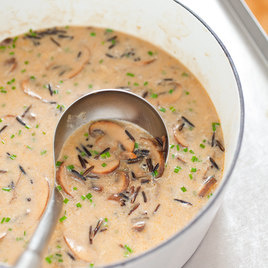 On Sunday I’ll be taking my two foster residents dogsledding. One of them has been obsessed with the John Beargrease Sled Dog Marathon her whole adult life, so when I learned of an organization which takes folks with disabilities on dog sled rides through the snowy woods of northern Minnesota, I signed my gals up. 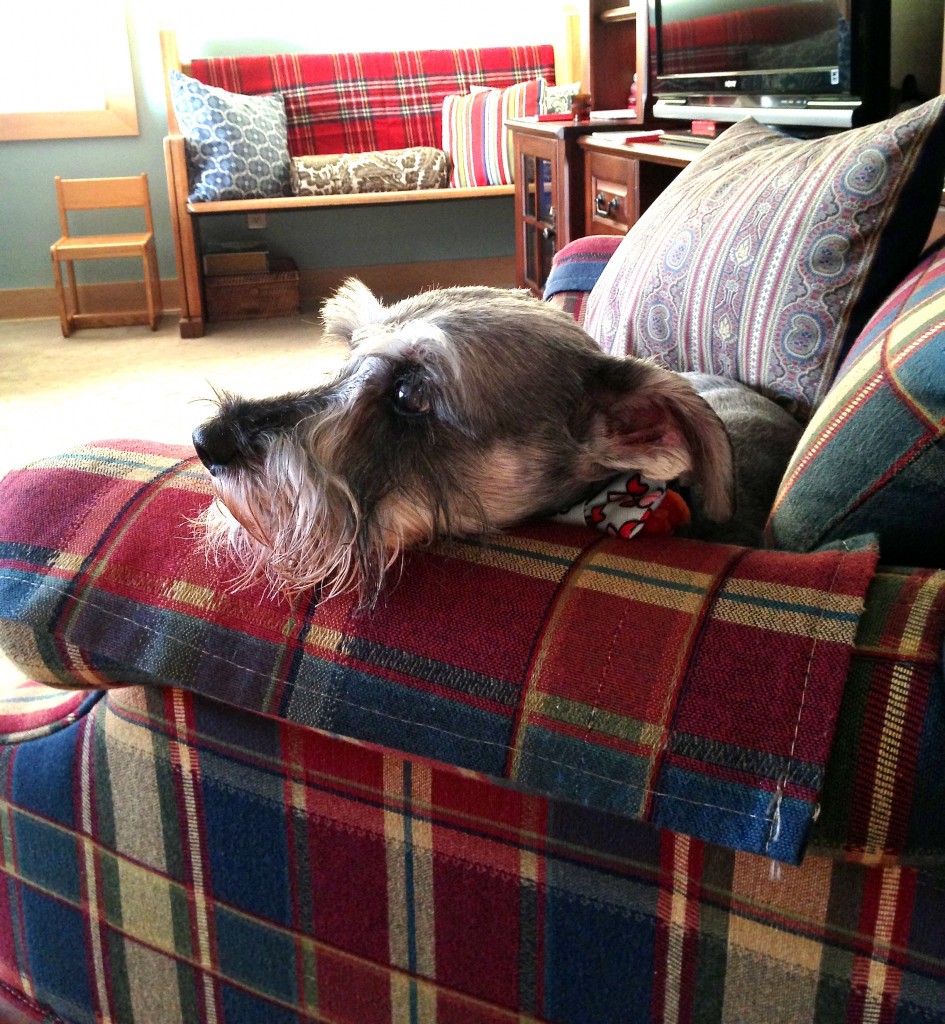 Her name is Mildred Virginia Sizzlelorum and she dashes through the snow in her dreams, while she’s stretched out in “her” plaid wingback chair in the living room, her closed eyes rolling with REM sleep, those schnauzery eyebrows twitching, and adorable muffled barks puffing out her little doggy cheeks.

I went to the eye doctor yesterday since my distance vision has become remarkably blurry, and learned why. I have cataracts. Oh yay. I won’t schedule surgery quite yet, because as I age it takes me a while to mentally process big things. I’m noticing other quirks of aging too, that make me laugh at myself. That might be a blog post for another day.

I have one more recommendation before I post this and start my day. Audrey Assad has a new CD out called Inheritance, and it’s beautiful. She says she made this CD with these particular songs, to help her pray. She calls it “a soundtrack for prayer.” I bought it and understand why she said that. It’s a worshipful CD that helps me put my mind on the Lord, rather than perseverate on all the situations that beckon me down into the ditch of despair. If you need an occasional hand out of the ditch of despair, you might consider this CD. Here’s a sample with video, and here’s another one I love.

What are you listening to these days? What wonderful book have you read more than twice? And more importantly, how are you doing today?