I’m up before the sun this morning, sitting here at my office window and looking out across the front yard that’s usually buried in two feet of snow this time of year, but has patches of leafy brown showing through the areas of quickly disappearing white. Yesterday it was over 40 degrees in northeastern Minnesota, which is almost unheard of for January.

Yesterday was also Friday, which is the day each week that my homeschooled oldest grandson Mr. McBoy comes over for some Grandma/Bible time. He and I enjoy our time together. It’s very relaxed and intentional, which sounds paradoxical but is basically how homeschool should be, I think. He and I have been slowly reading aloud one of my favorite children’s books, Treasures of the Snow by Patricia St. John. The setting is in a quintessential Swiss village. If you haven’t read it I encourage you to get a used copy and treat yourself. The newly printed edition has been revised with some of the dated language changed — I don’t recommend that one. Look for an older copy.

My grandson and I sit in the overstuffed master bedroom chairs, prop our feet up on the ottoman, wrap our shoulders in comfy throws, and prepare for almost immediate transportation to Switzerland, which happens after I read approximately one page of the book. We are there. We hear those Swiss bells tinkling on the cows’ necks as they are driven to higher pastures from the Alpine valleys. We can see the chalets with their heavy mantels of snow, and the primitive carts pulled by donkeys carrying huge rounds of Swiss cheese to the village market below. We can see the moon as it lights the jagged peaks of the Alps until they look silver.

At one point yesterday when I was reading about Annette and Lucien having hot chocolate, thick pieces of crusty bread with fresh creamy butter smeared on them and sitting contentedly by a fire in a humble dwelling, Mr. McBoy interrupted his rapt listening and said, “Mmmmm! That sounds so good right now Grandma. Thick crusty bread with butter on it.” If I had had any thick crusty bread I would have stopped right then and gone downstairs to cut us each a slice.

After we returned from Switzerland Mr. McBoy went downstairs, and I opened the children’s Bible and read in Genesis about Isaac and how the Lord provided his wife for him. We are going chronologically through the Bible — I want him to understand as much as he possibly can at age nine. Two weeks ago we learned about Job. I wasn’t sure if that would be too heavy for my grandson, because even an adult who has walked with the Lord for many years can still be completely silenced by the story of Job. I always try to make sure Mr. McBoy can summarize what we’re learning. I want him to see that even the hardest-to-understand Old Testament accounts have application for our lives today, even relevance for a nine year old boy. After we soberly read about Job and all that he lost, all he endured, how truly miserable his life had become, I sat next to Mr. McBoy on the couch and asked him quietly, “Do you think there’s something in this sad story that God might be trying to say to us?”

Mr. McBoy nodded. “I think God wants us to trust Him even when things are going bad and we don’t understand why.”

I’m so glad the Lord has given me grandchildren who can teach me about Him. Because they do teach me, even if they don’t know they do.

After Switzerland and Job, Mr. McBoy had a snack. I think when I’m dead and buried my grandchildren will remember me for a lot of things, but mostly for peanuts and raisins. I always offer them snacks like cut up apples and string cheese, raw almonds and sliced pears, or little bowls of peanuts and raisins, and the latter is usually most often chosen. They know how you can take apart two halves of one peanut and squish a raisin in between them, and make that look like a tiny little hamburger.

Perhaps at my interment my grands will throw peanuts and raisins on my casket instead of dirt, and I officially endorse that idea right now.

Then Mr. McBoy and I retired to the living room, where we played with a remote control helicopter I have for the grandchildren to enjoy. It’s quite the nifty toy. It has lights that flash when it flies, and it takes a bit of finesse to gently raise it off the ground and keep it hovering, and even more skill to micro-move the tiny joy stick on the right of the controls that makes it go forward or backward or from side to side. We crashed it several times, but yesterday Mr. McBoy and I took turns and we both got that helicopter up in the air and slowly circled it around the living room and even finally landed it on the couch. Edith is quite interested in it; Mildred puts her ears down and runs for her life when she sees the rotor blades even begin to turn. 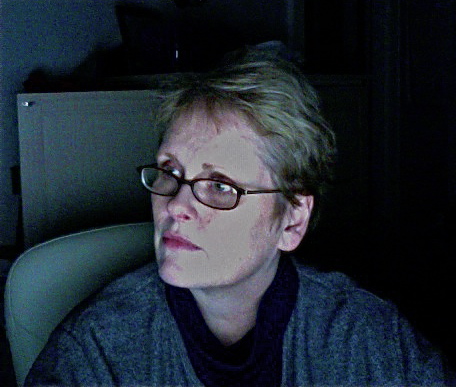 Mr. McBoy went home before lunchtime and I did housewifey things, like watch lovely and graceful deer eat the food my formerly deer-hunting husband places near our creek every day. I cleaned the kitchen, I put the sound track to Anne of Green Gables on our house stereo/intercom, and thought of how beautiful some of the pieces would be for a wedding processional. I composed a mental grocery list. And I told our real estate agent that when our six-month contract expires four days from now, not to renew.

Our house has not sold. In six months we’ve had seven showings and zero offers. Some of the feedback that was given was amusing to me and some of it was puzzling.

“We loved the house, but didn’t like the way the bedrooms were laid out.”

“We love the kitchen but it wouldn’t work because my wife is 4′ 8″ and the counters are too high.”

“The whole house is lovely, but we don’t like the basement.”

“We love the way it looks on the outside, love the backyard, but don’t think there’s enough family space.”

And the final pronouncement from the folks who came through last week: “We didn’t care for it and it was overpriced.”

So it appears as if we’ll be staying put in this big house for a while. We’ll see what the coming of spring brings to our area in terms of real estate trends. It has been a terribly slow market and I guess we’re not surprised that it didn’t sell, but I think I did expect a very low offer or two.

My son-in-law Chris is the Cub Scout master for his son’s (Mr. McBoy) pack, and while they went to the courthouse for a field trip yesterday afternoon, I had Mrs. Nisky (age 7) and Li’l Gleegirl (age 4) over for a couple of hours. I bought a used copy of The Christmas Miracle of Jonathan Toomey not long ago because my niece Lauren thought we would like it, and I sat with my two sweet granddaughters to share it with them. What amazing illustrations! As we sat together on the couch, Li’l Gleegirl snuggled close on my left and laid her head down on my shoulder as I read. From my right side, Mrs. Nisky’s attention never wavered, and when we got to the several parts in the story where there’s an unwelcome knock on Mr. Toomey’s door, I put the hardcover book down on my lap so she could vigorously knock on it for our sound effect.

When they went home I turned my attention to getting dinner on the table. Do you ever make Rosemary Roasted Potatoes? You probably do. But if you don’t, give them a try. So easy, and only a few ingredients, and they made the house smell so fragrant (I adore rosemary) and they go with almost anything.

There’s something that happens to me when I’m with my grandchildren. It’s like I enter a time-slowing bubble. And in this bubble, not only does time slow down a bit, but a magnifying lens is put in front of my eyes. It’s hard to explain, but when they’re near I know it’s time to savor. To revel. To pay attention. To fully immerse myself in what it means to be with them. I look into their eyes when they speak and I stroke their hair and just barely touch their forearms. I kiss the tops of their heads and tell them the things I love about them. Or I look at the beauty of their skin and freckles and the many colors of their irises. I love their giggles. I love how they’re the most fascinating mingled genetic representations of their parents. It thrills me to see Sharon’s hands in Mr. McBoy’s hands. It makes me smile to see Chris’s childhood in the shape and contours of Mrs. Nisky’s face. I marvel at the pigeon-toed walk and perpetual cheerfulness in Li’l Gleegirl and wonder where that all came from. 🙂

Truly, I have been lavished upon.

So all in one Friday, I took a delightful little trip to Switzerland, savored the blessing of being with three of my seven grandchildren, and learned that for now, Michael and I are staying put in our current home.

That’s what’s on my mind today. Have I thanked you lately for making time in your busy day to stop by my little blog? If not, I’ll say it again.

Thank you. And God bless your weekend, dear family and friends….