A couple of months ago one of my little granddaughters got her hands on some scissors and cut her own hair. It was not a happy occasion. Her parents had decided to let her hair (and bangs) grow out, and it was getting past that awkward stage when the bangs were too long to be worn on the forehead but too short to do anything with. Her hair had started to grow long and was looking so pretty. Then one day she chopped away at it, and her mama had to try to salvage what she had done, and bangs had to be cut once again.

That brought back to me a hair memory from my youth. When I was growing up my mom had a thing about long, stringy hair. And bangs. She disliked both. If my hair grew to shoulder length and fell down in my face for an instant, she’d say “Get that hair out of your face.” My mom was a very loving person and she didn’t say it unkindly, but I grew up in the sixties, and long hair stood for something back then. And what it stood for wasn’t something my conservative parents wanted their youngest child to be associated with in any way, shape or form.

My mom also had a thing about permanents. She thought they were adorable, especially on little girls. I didn’t really agree with her, but when you’re five years old you’re still forming your own opinions and ways in which to express them, so I never said, “Mom, can we talk? I don’t really want you to give me a Toni Home Permanent Wave. I want to grow my hair long and have pigtails and braids, okay?” I probably should have taken that route. Instead of obedience and/or diplomacy, I whined and pouted, and then took matters into my own hands.

My first permanent was when I was five years old, in preparation for a big event — my kindergarten school picture. My mom’s good friend Mabel, who was also her hairdresser (we didn’t call people stylists back then), put a tight, smelly permanent in my shoulder-length hair, and my mom thought it looked pretty darn cute. I must have thought it looked pretty darn awful. We have no pictures of me with that first perm, because that very night when my mother went to work (she was a professional organist) and my oldest brother Larry was babysitting me, I quietly slunk to my room, took my little turquoise blunt-end scissors and hacked all those curls off.

The next morning when I appeared in the kitchen for my Cheerios and milk, my mother was stupefied by the sight of my mangy look and was understandably quite upset. I remember a lot of muttering on her part, a scolding from my father, a sharply wielded hair brush as Mom tried to make my hair look presentable, and my loud sniveling crying. 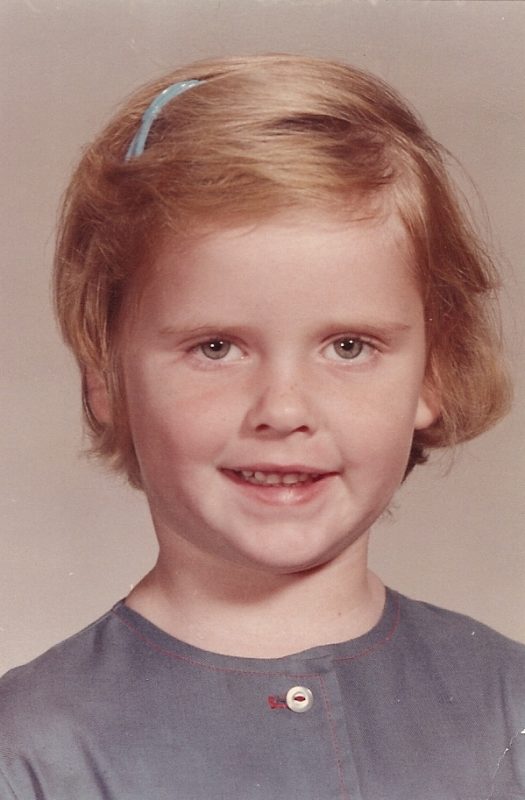 Here’s the Kodak memorial to the rebellion against my first perm at age five.

I actually think my kindergarten hairstyle pretty much resembles the one I have now, except I don’t wear plastic barrettes anymore and I actually pay someone money to give me the moth-eaten look.

1962 was also the year I had my tonsils and adenoids out and began a years-long trend of what my parents called “talking through my nose.” Because of the complications of the surgery, I also had the added problem of liquids sometimes running out of my nose as I drank them. Yes, I was a child of many unique talents.

Anyway, back to the subject of hair. By the time I was in junior high school I put my inner foot firmly down about short hair and perms. I decided to let my hair grow fairly long and I kept it that way, or at least past my shoulders, until I was in my thirties.

When this kindergarten photo fell out of a memento folder I was going through last week, I sat down and studied it for a few minutes, and so many memories came flooding back.

Warm and golden Southern California days, a little red bicycle with training wheels, my teacher Mrs. Staton playing the piano and singing “My Country ’Tis of Thee,” playing “store” with neighborhood friends, brothers ten and fifteen years older than I, learning to swim at The Covina Plunge, our epileptic, rock-fetching dog named Dutchess, playing hopscotch almost every day, our behemoth Buick station wagon with California license plates JDT 043, my father coaching high school basketball and watching Perry Mason, my mother playing the Hammond B-3 organ and ironing shirts, my stoic grandparents Bud and Oma and our Sunday visits to their house.

Now I’m a grandparent myself and I have kindergarten photos of my own dear grandchildren in my office, bedroom and wallet. I show them to anyone who’s polite enough to act interested in seeing them. How do I say that time flies without sounding trite and clichéd? I don’t know, but I’ll try anyway. Time zooms, it rockets, and I’ve gone from being a vulnerable, trusting, slightly moth-eaten and headstrong five year-old to being a vulnerable, trusting, slightly moth-eaten and headstrong fifty-two year-old. In what seems like about seventeen days.

I guess I’m steeping myself in nostalgia lately. I sort of like the sound of that phrase – nostalgia steeping. This morning one of my friends asked me what I had planned today and I gave her the list. I should have answered her, “I’ll probably do a little paperwork, some housecleaning, some grocery shopping, and quite a bit of nostalgia steeping.”