We have a few toys at our house, stashed in a laundry basket underneath an old oak church pew in our living room, and our grandchildren often head straight for them when they visit. We also have a “grandchildren’s drawer” in our kitchen that I try to keep things in for them. The latest treasures I placed in there were a Slinky, a Lightning McQueen car, a new book, and a stuffed baby bluebird who plays an actual recording of the Eastern Bluebird’s song if you squeeze her, ahem, tail feathers.

One of my oldest granddaughter’s favorite toys is something she picked from the dollar bins right inside the entry at our local Target store – a brightly painted plastic dinosaur she named Penny. Penny is a Pachycephalosaurus, an odd and rarely-heard-of dinosaur whose body is painted various shades of neon green and whose head is painted a dull industrial gray.

I think Penny fits right into our household, because of what kind of dinosaur she is. From the Greek, pachy means thick (remember thick-skinned elephants — pachyderms?) Cephalo means relating to the head. And saurus means lizard. So a Pachycephalosaurus was a thick-headed lizard. And while I have never been called thick-headed, I do recall the word stubborn being bandied about a few times over the years; I think they might be synonyms.

In some places online this dinosaur was actually called a “bonehead” – its skull could be up to twelve inches thick in places, and was used to ram its enemies.

Anyway, I was surprised that six-year old Clara chose the strange Pachycephalosaurus from the dollar bins, and even more surprised at how maternal she acts toward Penny. Right off I wanted to find a way for Clara to remember how to say this polysyllabic word, and as we strolled through Target I finally settled on a method.

I said, “When you go on a trip you need to pack some things, don’t you? You get out your suitcase, and you pack a brush, you pack a nightgown, you pack a pair of shoes, and if you take your dinosaur with you, you “pack-a-SEFF-a-lo-SORE-uss!”  That did it – it created the place in her brain that a word that large could hang on, and she smiled up at me from her seat in the cart and said flawlessly, “Grandma, I’m going to name my Pachycephalosaurus Penny!” 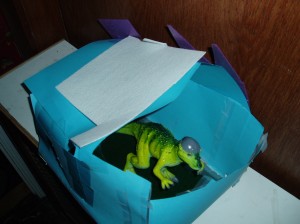 Penny the thick-headed lizard enjoys a lot of tender loving care when Clara comes for a stay at Grandma’s. Penny gets to take baths in the big whirlpool tub. On top of a heating radiator, Penny stays warm in her own little dinosaur garage that Clara made out of felt, construction paper and copious amounts of packing tape. How appropriate is that? Packing tape for the Pachycephalosaurus. 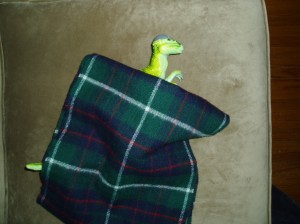 And when it’s bedtime, Clara carefully lays Penny down near her pillow, and covers her with my McIntyre plaid woolen scarf, purchased in Edinburgh, Scotland. Clara croons at Penny and takes great care to make sure she’s comfortable for the night, before turning to her own pile of books she quietly reads before nodding off.

And now for an abrupt segue: we have a winner for this month’s bloggy giveaway!  I so enjoyed reading about your first cars and thank you all for commenting. The seventh person to post a comment was Rob F., and he will receive a gift certificate to amazon.com, where he can purchase anything from books and furniture to kitchen tools and plastic dinosaurs. Maybe Rob will leave another comment soon to tell us all what he bought with his gift certificate. 🙂

We are finally warming up here in northern Minnesota. It’s supposed to be thirty-seven degrees (above zero) today, and that means no mittens, no hat, no boots, no scarf, no warming up the car before driving.