Lately every morning when I get up I peek hopefully out of our bedroom window to see if it snowed during the night. So far this season, all we’ve gotten is a dusting. Everyone is talking about how we’re probably going to have a brown Christmas, and that seems a little sad and disorienting to me. Last year at this time we had two feet of snow on the ground already. Our newspaper says that the last time we entered a winter this dry was in 1949.

I’ve been trying to rewrite the words to “White Christmas” in my head and have gotten this far:

I’m not dreaming of a brown Christmas
In Minnesota we have snow!
Our yard looks so drabby
It makes me crabby
To hear dead leaves crunching as I go

I’m not dreaming of a brown Christmas
It’s certain something is amiss
We won’t stoop to say “boo” or say “hiss”
But a Christmas blizzard would be bliss!

I know. You’re in awe, and you just don’t have words to describe my poetic gift. Shall we pause, then, and let those stanzas silently impact our souls?

I have to do something today I try never to do — visit our local shopping mall. I have a pair of Levi’s to buy for someone and since there are four hundred twenty-seven styles of Levi’s to choose from now, I think I need to see and feel them firsthand to make a good choice. I mean, there are Levi’s 501 Originals and 505 Straights. There are 559 Relaxed Straights and 569 Loose Straights. There are zippers and there are button flies, skinny legs and wide legs and bell bottoms.

Nothing sounding good yet? How about a pair of Dimensional Rigid Levi’s? Or a pair in the BBQ color?

Mom!! Have you seen my Dimensional Rigid BBQ Zipper-Back Levi’s? I’m late for school Mom! Didn’t you wash them Mom? What about my Raw Selvedge Mid-shift Sahara Levi’s? Moommmm! I thought I told you to wash my Levi’s!

I’m not making this up. Check the Levi’s website if you question my sanity. All I want is a pair of regular Levi’s in a size 34 x 34. I hope I don’t come home from the mall this afternoon all traumatized by my Levi’s experience.

In other news, we received a phone call recently from the salesman who sold us our Honda a couple of years ago. First he wanted to know how many miles are on our car, and when I told him 20,000 he sort of let out a little squeak of glee. Then he wanted to know if we would consider selling him the Honda he sold us. He said used Hondas are a hot commodity right now and he would give us a really good deal on it, especially if we wanted to buy another Honda. I told him we’re actually thinking of buying something smaller next time, like a Subaru Outback or a Toyota Highlander, and he tried hard to hide his disappointment.

On the unexpected phone call front, I received a call a few weeks ago from a man who told me my maternal grandmother (who died in 1983), had a sizable unclaimed chunk of money in a certain stock company, and that his organization had been hired by this stock company to find the legitimate heir/s. I was of course able to fill in for him many missing details about the few heirs my grandmother had. When I asked him which stock company held my grandmother’s money, he declined to tell me, saying politely, “If I told you the stock company, what would prevent you from going straight to that company to claim your inheritance? This is how our company makes its money.” He told me stock companies often hire organizations like his, and that for those of us who are my grandmother’s heirs, we would each have to sign an agreement donating 35% of the monies to the man’s company for their services. When all divided up between the heirs we’re not talking about huge bucks, but 35% does eat away a large portion. Hmmm. Maybe there’s a different way to go.

When my best friend Denel and I were very young, we were always together, always reading, and always using our wild imaginations. Denel and I were both avid Nancy Drew book fans, and when we were about nine years old, we decided we wanted to be girl sleuths too. Except neither of us had titian-colored hair or were old enough to drive roadsters while wearing our dark blue pumps. Using the first letters from our combined then-last names, we decided to open The Lupi-Soo Girls Detective Agency. We were so certain there were mysteries waiting to be solved in the greater Covina, California area, and that we two girls would be called upon to assist. After waiting a few minutes for the phone to ring with desperate people on the line needing our sensational sleuthing services, we decided to go bike riding instead. The Lupi-Soo Agency never really got off the ground, but it still lives on in our hearts four and a half decades later.

So I reached deep into the recesses of my Lupi-Soo Girl Sleuth memories and started making some phone calls. In less than a day I was able to find out the stock company that has my grandma’s unclaimed funds. But they won’t release it to us, because we don’t have a copy of her last trust. And trusts (unlike wills) are not required to be filed publicly, and anyone who would have known the whereabouts of the trust is now gone from this earth. It’s easy to prove we’re my grandmother’s heirs, but without the trust we can’t prove that she intended for us to inherit. From the stock company’s point of view, we could just be a few fake grandchildren trying to illegally obtain someone else’s dormant property.

Our attorney says that our only hope is to somehow find the attorney (among the 64,000 lawyers who practice in the state of Missouri) that drew up my grandmother’s trust in the early 1980s. This means that there’s even a good chance that said attorney has gone on to glory himself. The phrase needle in a haystack is very apropos in this situation.

One of my brothers is working on the case too. I don’t know if he ever thought about forming The Ladasoo Boys Detective Agency when he was little, but if he did he’s getting his dream now.

I have a solid peace that somehow it will all work out. I don’t feel a need to rush about it, be overly concerned about it, or develop a twitch in my left eye about it. In the right time, it will all be resolved. 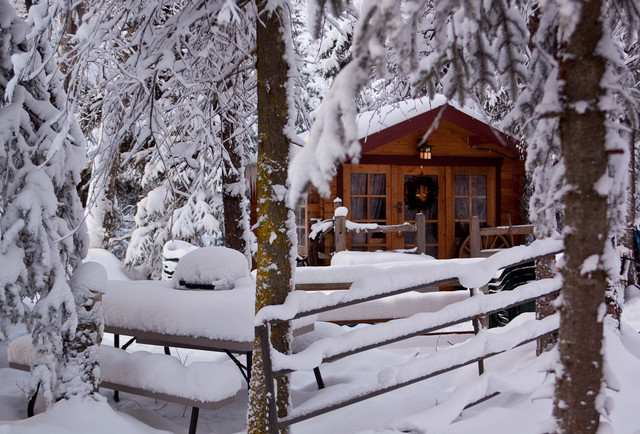 Now back to Denel.

After her trip to Minnesota in October, she and I decided that we just can’t let so many years go by in between our visits. So in 2012, we’re planning to meet halfway between her home in SoCal and my home in NoMin, and get together for a long weekend in a log cabin in the Rockies. We’re calling it our First Annual Lupi-Soo Convention.

I can picture now the blazing fire in the cabin’s stone fireplace, the cups of tea and coffee, the feet up on the ottomans, the dark chocolate, the smell of pine as we walk the trails, the laughter and reminiscing, and the heartfelt, mother’s prayers for our beloved children.

There is one thing about which I am fairly certain, however.

If Denel and I live to be 74, and are still flying off to the nether regions of the world to spend a long weekend celebrating our blessed friendship each year, I won’t be packing any Rinsed Neppy Caraway Twill Levi’s.

I think I might pack my Relaxed Rebel Roamer Levi’s instead.

And I’m not making that one up either.