She wakes at 4:35 a.m. and is satisfied with that. If I go back to sleep, fine, if I don’t, this was a decent night’s sleep. She reaches over to the nightstand in the dark and feels for the little bottle of Systane eyedrops, peels her bone-dry upper eyelids from each eyeball, then squeezes two soothing drops into each eye.

She notices how dead quiet it is here in the woods, in this log cabin loft she calls The Tree House. Windows behind the king-sized bed, to the right of the bed, and across the small loft beyond the foot of the bed are filled with foliage and sky, prompting the name. Being in the middle of eighty wooded country acres means there are no nearby streetlights, businesses, headlights, or glowing windows from neighbor’s houses. At home near Lake Superior, even though her house is in a quiet neighborhood, occasional sirens can be heard, a streetlight stands and beams close, and semi-trucks can be heard heading south on I-35, two blocks away.

She puts on her glasses, pockets her dang phone, slips her toes into her Haflingers with the embroidered sheep on the tops, and eases her way down the precarious wooden steps in the dark. “Be careful,” he urges as he throws back the covers and sits up. She takes it one step at a time.

The sun is barely paling the sky over the trees of his woods. Near his recliner she checks the indoor/outdoor thermometer and calls up, “Thirty-six outside.”

“What is it in here?” he asks, and she peers again in the dim cabin living room and answers, “Sixty-three.” She clicks on the air source heat.

She pours some organic half and half in a large mug decorated with a cardinal pair, then pours cold brew over that. He comes downstairs and makes his own pot of hot coffee, turns on the floor lamp with the painted trout and angling gear on the shade, and they sit together on the love seat, ready to read.

It’s October, and an odd date, so that means she reads first. He leads on even days. Her reading is from the gospel of Mark, the account of the Zebedee brothers asking Jesus for special seating in heaven. After she reads the passage and the meditation, he takes out the smaller devotional and reads aloud from the book of Hebrews. Because of what Jesus did, God’s children can approach His throne of grace with confidence, to obtain the mercy needed every day, every moment.

They sit and look through the windows and see what’s left of the autumn leaves, and share quietly together about what confidently approaching the throne of grace really means. Not having to grovel and beg, not having to make an appointment and hoping the King would grant a short audience. Can He be so merciful, so welcoming?

They eat a simple breakfast. He likes bran flakes and Cheerios together in one bowl, with cranberries and chopped walnuts added, and pours milk and Madagascar vanilla kefir over it. She cuts up an apple, scoops a tablespoon of peanut butter onto her plate, and joins him at the table, where he has already put the cooked links of chicken and sage sausages they enjoy.

They watch the half dozen blue jays swooping to and fro outside. He clears the table and she says, “I’ll do the dishes. You made a nice dinner for us last night.” She puts on some jeans and a turtleneck and folds her flannel plaid nightgown and places it in her overnight bag on the glass case with the real stuffed pheasants in the dining room. He dons a hat and a heavy flannel shirt before heading out to put out food for the birds and deer that live in his woods. She plays some Celtic music from her dang phone, and washes the dishes while praying for some marriages on her heart.

The low autumn sun is streaming golden through the cabin windows and the remaining leaves on the birches near the pond rustle in a way that always reminds her of applause. “Aspen leaves are God’s sequins,” she read online recently and smiled, agreeing. And birch leaves too. The trees of the field will clap their hands….

She gathers her journal, her bold point pen that flows so smoothly and calligraphically, her CBS study of Daniel, and a book on the topic of rest for the believer, then feels for the button on the side of the loveseat that lifts her feet and legs up off the ground in comfort. She loves to settle in here, thinking and praying and reading and writing. 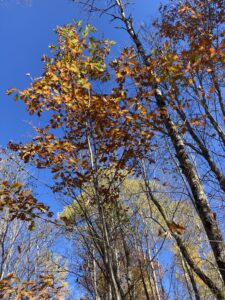 A couple of hours later, they both pull on socks and walking shoes, and head out into his woods, walking the trails he cut over twenty years ago when he moved to the Minnesota Northwoods after retirement. He knows she isn’t as steady on her feet lately because of a sudden and puzzling iron deficiency, and her wonky prosthetic knee. He retrieves two chest-high walking sticks he’s cut and sanded and holds them out to her with a smile. Each step they take is crackling and loud with the fallen oak, maple, poplar and birch leaves carpeting the ground up to their ankles. Chickadees flit and flutter across their path, and they pause to watch them here and there.

He points out the blueberry patches along the trail, long picked bare by wild turkeys, and probably a black bear or two. They stop to inspect hard mushrooms growing on the sides of trees, and bark growing over them. They find a place deeper in the woods where an old cabin foundation stands. Over a century ago who lived there? Further in is an old sink and some kind of metal headboard piled together and nearly covered over by brush growth. They walk by a giant white pine, long dead and stories high, slowly killed years ago by porcupines. He knows she doesn’t like to hear about animals suffering, but he tells her grimly that he shot the porcupine when he could finally catch it in its tree-crippling ways.

They come upon a mound of dirt half the size of a barrel. “Ants,” he mutters. He shows her things she would never have noticed on her own, and explains things he’s observed from living in the forest for almost a quarter of a century. He can see where bucks have scraped the trees, what a timber wolf has eaten by its (surprisingly huge) scat, which trees have unseen insects slowly destroying them, which raptors have been decreasing his red squirrel population.

They stroll into a clearing and she considers taking her cardigan off as the sun is warm and the sky cloudless and dark periwinkle. He points to a four foot long depression in the grass where a large deer had recently rested, and she sees the pronounced outline, curved on one end where its rump had been. A few strides further they see the deer droppings, so fresh the animal must be close by. Are they being watched and sniffed? Is there a twitching nose back in those trees, a white tail ready to raise an alarm?

By the time they walk a mile, she’s thirsty and looking forward to taking off her hiking shoes and SmartWool socks in the cabin. She drinks deeply of Lake Superior water, brought to his place in jugs from her house, as they both think it’s the best tasting water they’ve ever had. She reads a while with her feet up, then gets up to put some jasmine rice on to simmer while she cuts up all the ingredients for a grain bowl meal. Squash, green onions, chicken breasts, salsa verde, cotija, and seasonings. He sets the table and pours Fever Tree Ginger Beer for both of them, and they pray for their families before they tuck in.

The sun begins to sink behind the trees skirting his land and an autumnal chill seeps in. She wonders if it will dip into the thirties again tonight while they sleep in The Tree House. He does the dishes while she takes notes from a podcast she’s listening to for the second time. He nods his head as he listens too, and she writes down “Reticular Activating System” and “neurobics” in her journal, and decides to research these in the future.

Tomorrow morning she will pack her overnight bag and he will carry her things to the Outback, and they’ll hug and then wave wistfully to each other as she drives his long and winding driveway out to the county road which will lead to the highway that will take her home.

They’ve been married two years now, and have no plans to live together permanently. His home is here in these peaceful and glorious woods. He built it himself, and loves his land. Her home is near the shore of the largest freshwater lake in the world, close to her daughters and grandchildren, and she can’t imagine making a purposeful decision to change that.

They will talk on the phone right before they both go to sleep, she in her lovely oasis and he in his cozy tree house cabin loft.

Sometimes she dreams of her beloved husband Michael, gone from her for almost seven years. And he tells her of his infrequent dreams of Rosemarie, taken suddenly two months before Michael.

How and why certain lives, previously unknown to each other for decades, eventually meet and meander and intertwine so late in life, is still a mystery to them both.