Little House in the Big Woods

Almost two weeks ago I took my foster resident Carrie on a four day trip to Walnut Grove, Minnesota, to see all things Little House on the Prairie. We decided to invite a former foster care resident, Betsy, since she loves the Little House series too. Carrie has lived with me for thirteen years; Betsy was here for seventeen before I began the glacial process of semi-retiring, and decided to help place her in a wonderful family foster home not far from here.

Even though it was a working vacation for me, Lloyd wanted to come with us, and we rented a new Voyager at the last minute when I went down to the garage to load suitcases and found my Outback battery so dead not even a click would sound. (I didn’t know then that the wayback dome light had probably been nudged on when I put two big boxes there, but at the time I didn’t want to chance jumping the battery and having the source of the problem be something more serious that would plague us on the trip.)

The gals were excited for our adventure and we had a great time with them. They each had enough of their own money to get hotel rooms for themselves, and we had three, right in a row so I could check on them and help them as they needed. One of them is severely diabetic and her continuous glucose monitor helped me keep her blood sugars safe while we were gone.

We stayed in New Ulm, Minnesota, a beautiful little German town with an interesting history. We took the gals to see the town Glockenspiel play, had takeout Mexican food in a lovely park, drove to Minneopa State Park to see a herd of buffalo. Walnut Grove was about a forty-five minute drive from New Ulm, and we went to the Laura Ingalls Wilder Museum and toured all they had to offer. Carrie and Betsy love to shop for soobeneers, so a lot of time was spent in the quaint gift shop, filling up their bags with books, DVDs, key chains, hoodies and doodads. Carrie was happy to swim in the hotel pool, and we had plenty of time to rest too.

I had never spent time in Southern Minnesota, and it was so beautiful. I’m accustomed to the rugged, rocky, densely treed and river-cut North Shore area of Minnesota, where all things lead to Lake Superior. We drove through miles and miles of Brown and Blue Earth counties, and I was entranced. Mostly flat but sometimes mildly hilly, the terrain was dotted with neatly kept farmhouses set back from the highways, grain silos, barns and cows. Lloyd told me that Blue Earth County was named so because the earth was so rich and black it almost looked blackish blue, and we saw this clearly. Blue- black soil as far as the eye could see, ready to be planted, and I wondered if anything that had ever passed my lips had been grown in this fertile area we were passing through.

My foster gal Carrie always says, “It’s good to get away, Julie, but it’s always good to come home!” And so it was with this trip as well. We recounted aloud together the things we’d done and seen while we were gone, but there’s something wonderful about sleeping in your own bed after being gone a while. One of the highlights was when we drove through Minneopa State Park, hoping to see buffalo. We were warned to take binoculars since the herd might be far off, and we did. But as we passed one fenced area I caught sight of a few beasts within a long stone’s throw and Lloyd slowed to a stop so we could see them through the scrubby trees. If they had been cows I could have stuck my head out of the window and mooed to get their attention, but I wasn’t sure how buffalo sounded. I quickly found something on my iPhone, bluetoothed it through the van stereo system, rolled down the windows and hit play. Oh my goodness. If you’ve never heard the American Bison, you can click here.  We were so tickled to see one of the shaggy and hunchbacked bulls slowly swing his head toward us when he heard the calls. He fixed his little eyes on us as if thinking, “Who do you think you are?” and promptly lifted his tail. This delighted Carrie and Betsy to no end, and might just have trumped the entire trip over all the Laura Ingalls Wilder details.

Like Carrie says, I love to come home. My house is a gift from God, a haven and quiet place where I can hope, heal, rest, renew. Introverts need a lot of those things. And even though Michael has been gone for over six years and I’m remarried, Lloyd and I technically live apart. If you had told me when I was young that I’d someday be married and yet not live full-time with my husband, I would not have thought that appealing. But lots of things change when you’re old. Lloyd lost his Rosemarie two months before I lost Michael. They raised their family in St. Paul and then they retired on eighty acres of north woods after the kids grew up and had families of their own. He built a log cabin in the middle of those woods and dug two ponds. It’s his piece of heaven on earth, and we both love it. I have my own piece of heaven fifty miles north of him, with ever-changing and sapphire Lake Superior always in view. Lloyd has two seventeen year-old cats who are crazy about him, and when his neighbor can care for them, he comes to stay with me for a few days at a time. When I can get respite care for my foster gal, I drive down to stay with him on the occasional weekend. We talk to each other at least twice a day, but ten days or two weeks might go by before we see each other. He loves his little house in the big woods, I love my white house by the big lake.

Here is an aerial picture of Lloyd’s cabin. See it, down at the bottom of the photo? 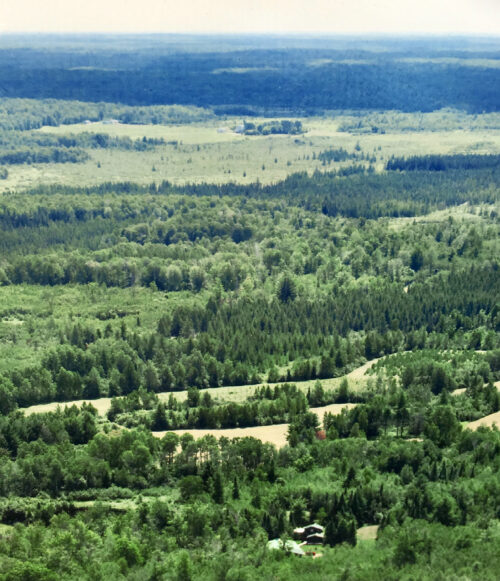 When I’m at Lloyd’s, I love the immediate feeling of everything slowing, breathing more deeply, and observation intensifying. We’ve seen a huge black bear swim around in the pond closest to his cabin, lumber out and shake off, then stand up on hind legs to scratch his back against a tall pine tree for a at least thirty seconds. We’ve seen a good-sized porcupine with light-tipped quills amble toward the cabin, close enough for it to hear me whisper in the window and decide to go back into the woods from whence it came. We’ve seen glossy fishers, three feet long and so fluid in their movements, dart through the moonlit snow in one direction, disappear from view, then run back with some unfortunate rodent hanging from its mouth. Wild turkeys fan their tails and strut hopefully to attract potential (yet mostly indifferent) mates, cautious deer with twin spotted fawns step into the yard, redheaded pileated woodpeckers cling to the sides of dying trees, listen for insects, then soar low and slow through the woods. Red squirrels run-hop nonstop from tree to tree, from brush pile to picnic table, squabbling with each other, dashing under the cabin. Lloyd goes outside and tells them in the most reasonable manner that they need to stay away from the cabin or else. He thinks they listen to him sometimes.

At Lloyd’s little house in the big woods, I read. I write in my journal. I pray. We make a big salad each time I visit. He grills a chicken breast outside, and I finish chopping romaine, red cabbage, vine-ripe tomatoes, yellow bell peppers, carrots, celery. If I remember to bring mushrooms, I saute them in a little olive oil and butter, and when they’re reduced I add garlic and sherry, a pinch of salt and a generous couple of twists of fresh ground pepper. I might add a few dried cranberries to the salad bowl, a handful of pecans or walnuts, and some roasted asparagus. We slice the chicken and toss everything together for an early dinner. I like blue cheese dressing (first tasted when I was a little girl at the Lyon’s Den restaurant in downtown Covina, California), Lloyd prefers French. If we have any Great Harvest sourdough bread, I thinly slice that and warm a couple of slices in a skillet with all the mushroom/sherry/garlic juices, and I know Lloyd will roll his eyes when he takes a bite.

If the bugs aren’t too bad, we walk the half mile of his winding driveway to the mailbox. In the fall when the bugs are gone, we traipse through the woods and he chuckles when I interrupt our walks every seventeen feet to oooh and aaah over some treasure I find. We read devotions to each other while we sit on the screen porch and listen to the birds.

At night we sleep in his loft, which barely fits the king-sized bed. I like a softer mattress and he likes one that disguises itself as a quilted board, so he kindly and ingeniously solved that problem by purchasing two twins, one hard, one “plush,” and putting them together on a king frame. We use king sheets and blankets, and you can’t even tell there are two different kinds of mattresses. Sleeping in Lloyd’s cabin loft is like being in a treehouse. The view from the windows is nothing but trees and sky, and waking up to the green quiet is sublime. 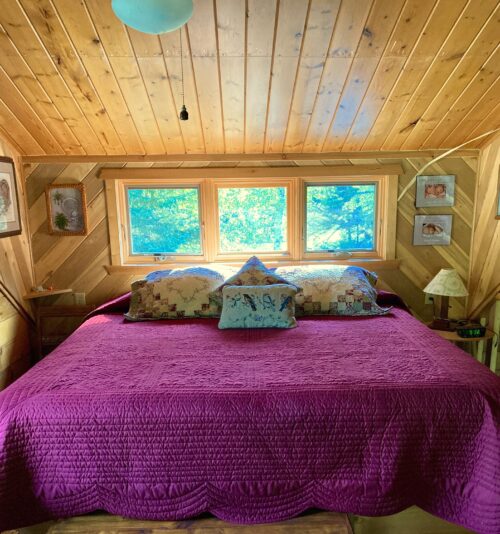 Lloyd and I freely talk about Michael and Rosemarie. We honor them and our previous marriages and families. We love each other, but he was married for fifty-one years and I for thirty-three, so we know how much of our lives were filled up with another.

This is probably why we both feel comfortable with the way things are, living apart for now. We talk about the day when my house might be more than I want to care for, and when the never-ending maintenance a log cabin in the encroaching woods requires might be too much for him. We know we might live together full time someday, perhaps in a place new to us both. And we know too, that it might not happen at all.

Experiencing deep grief helps us live in the moment more than we did before. We know how quickly someone we love can just up and depart from this earth. He likes being here in the white house by the big lake, and is often reluctant to go home. I like being in his little house in the big woods and wish I could stay longer, but I feel the pull of my responsibilities here call me back. For now, for two old people already established in their homes and ways of life, it’s working well.

I’m off now to make myself a late breakfast. One half of an Ezekiel sprouted wheat English muffin with butter, a couple of chicken and sage sausages, and a sliced Honeycrisp apple. I might take a bike ride later, and then this evening I’ll be going to hear my beloved granddaughter Audrey sing in her choir’s recital at The College of St. Scholastica. She’s almost fourteen and I call her Beauty, because she is.

A very blessed and peaceful Sunday to you all,