Licensing, limbo, and losing my lunch.

A couple of days ago I spent at least seven hours at my dining room table, catching up on foster care paperwork and preparing for the always-epic state re-licensing coming my way next month. A friend and colleague went through one of my books page by page with her trained eyes, and she’ll be back in a few days for round two. As we sat across from each other and occasionally chatted, Christmas carols played from my little Bose speaker on the fireplace mantel behind me, 1000-foot ore boats passed in clear view on the big Lake, lovely, feathery snowflakes fell, and tea and treats were consumed. When we heard that the forecast for Christmas day was calling for three to five inches of snow, we said yay and agreed that we hoped for a doozy of a storm. Now the forecast has been updated and it looks like those of us close to Lake Superior will see only rain or freezing rain. Boo.

That scene was much more pleasant that the one I was in on Monday morning, however. Something happened to me that I hope was a singular occurrence. The weekend had been bitterly cold, and I wasn’t anxious to go out to run my errands, but we were low on groceries and a prescription for one of my fosters was ready to be picked up. I drove my Subaru Outback to the closest grocery store, parked close to the entrance since I didn’t want the biting wind on my face any longer than necessary, and then I grabbed a cart inside. I chose asparagus, Honeycrisp apples, romaine lettuce and blackberries. As I meandered toward the back of the store, a sudden wave of nausea overwhelmed me and I knew I was going to throw up within seconds. I hadn’t eaten anything new or out of the ordinary that day, I hadn’t been sick, I’m the kind of person who might puke once every ten or fifteen years, and there I was, seconds from throwing up in public, near the produce section of the store. I bolted for the black swinging doors that lead to the private rear of the store and they slammed open from the force of my cart. An aproned employee was there and looked at me quizzically. I blurted out, “Where can I throw up? I need a container!” and he shook his head no and pointed behind me to other parts of the store, where there must have been a bathroom. There was no way. Right there, with no place to turn, the horrible thing happened. The middle aged, wavy-haired, slightly built man did not want to see what he was seeing, and vanished through another door. There was nothing but water in my stomach, so (I realize this is TMI) there wasn’t a terrible mess. I found a towel-like cloth on a shelf and foot-mopped a bit, and then went back out into the store with my cart of produce. I felt terrible that the employee had been given a bad work-related memory, but there was nothing I could do. In fact, even though the nausea was gone, I felt very wobbly and weak, but continued with my shopping! I wasn’t about to go home and then have to send someone back. I felt okay the rest of the day, but think I might not go back to that store after this.

What an awful thing to read on someone’s blog, right? I would totally understand if you just decided you were done here.

Thankfully, Christmas is in two days, and my shopping is done. We choose numbers in our family so aside from the grandchildren, I had one person to shop for, and it was all done online. We will go to Jeremy and Carolyn’s on Christmas Eve, and she will make Beef Bourguignon, and everyone else will bring something to add to our family feast. I will bring my stuffed baked potatoes, and if you’d like to see mouthwatering pictures of them and see the step by step recipe, click here. On Christmas Day the children will open their gifts at their own homes, then everyone will come to my house for a mid-morning brunch. We’ll read the Christmas story from Luke, sing a few carols, and maybe play a game or two in between all-day grazing.

I’ve enjoyed attending many Christmas events in the past couple of weeks — as my grandchildren grow, so do their talents and commitments. I’ve been to Cullen’s Freshman choir concert, Eleanor’s Christmas orchestra concert (she plays the cello), Margaret’s youth choir’s Christmas concert, Vivienne and Audrey’s elementary school holiday program (where the word Christmas is apparently verboten but Hanukkah and Kwanzaa and non-Christmas related songs were enthusiastically performed), Margaret and Louisa’s school Christmas program, and 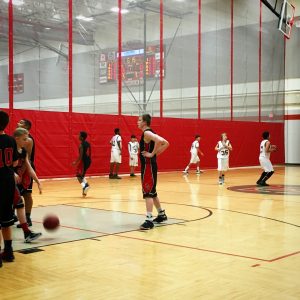 Cullen’s first home basketball game at his school. He is 14 years old and is already 6′ 2″, which I’ll probably keep reporting since it still tickles me.

As I type this, Mildred the Schnauzer is licking her chops after just finishing her dinner and trotting around in the melting snow in our front yard. I have the tree lights on just to the right of me, and I can hear Phoebe the Parakeet in the dining room, doing her little sleepy rhythmic cheeps (she actually sounds like she’s beeping, but who ever says a bird beeps?) as she settles down for the night. I don’t have to make dinner since both my fosters are safely ensconced with their families for the next couple of days, so I think I’ll just have a handful of this and a 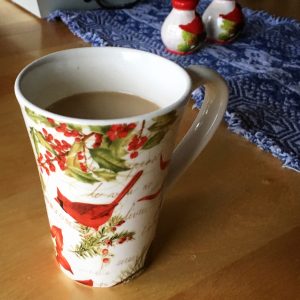 hot cup of that in the lovely new mug my dear friend Su gave me recently. Sounds like heaven.

It has been 682 days since my Michael graced this earth. It’s hard to believe the two-year anniversary of his move to heaven is approaching. Last night on my way to Cullen’s basketball game, I drove up the street that leads to the house we used to live in before we moved to our smaller home in May of 2012. I wanted to see the neighborhood Christmas lights, and see where the family who bought our house put their tree. As I drove through the winding streets, I was reminded how much Michael and I used to love taking a Christmas drive to see all the lights in and on peoples’ houses. We used to play carols, he would have a hot cup of coffee in his travel mug, and we would ooh and aah like so many people do. A wave of sorrow washed over me as I felt anew that I will never, ever experience any of this again with him. Never hear his deep voice, see his eyes looking into mine, smell his neck. Truly, grief is a journey that changes hour by hour, and even though my heart doesn’t feel as raw as it did in February of 2015, there’s an odd sense of unreality to this path sometimes. Sort of like I’m waiting, watching, like I’m in some kind of limbo. And yet I am quite content, full of gratitude and praise most days, and enjoy the life God has given me. I am now a single woman, but I don’t feel single. I feel married. Maybe that’s the way it will always be. I know some of you are walking through different forms of loss as well.

What is the best thing and the hardest thing about Christmas for you?

As I close this post for today, I pray for each person who might stop by here, and I ask that the Lord would give you His peace this Christmas.