I hope your Easter was a special day touched in some way by the love of friends, family, and God. Easter reminds me that with Jesus there’s always hope, no matter how occasionally hopeless things might seem. Not only did Jesus rise from the dead, but His resurrection power can bring other dead things to life. Dead hearts, dead relationships, dead people – nothing is too difficult for Him.

We went to church where we could hardly find a place to sit, so our family had to sit two here, three here, two here, etc. Then we came home and started the food preparation for our Easter dinner. Later on in the day the grandbabies had a good time searching the big yard for candy-filled eggs.

My son-in-law Chris was in charge of the ham. I’ve always been so ho-hum about ham (that sounds like the title of a book – Ho-hum About Ham) until I try the baked hams that Chris prepares. He rubs some stuff on the ham, puts it in the oven in a roaster for 90 minutes, and then it invariably turns out so scrumptious that I rave about how ham is my new favorite meat. Then in a few days I’m back to being ho-hum about ham, until the next time Chris makes a ham and I’ll be all wound up about it again.

My daughter Sharon made roasted fresh asparagus, which I had never eaten. I could have written an essay entitled Ambivalent About Asparagus, but after tasting this, I have changed my tune on a food once again. Sharon also made spring-like desserts: homemade lemon squares and made-from-scratch carrot cake, the latter of which I am enjoying while typing this blog post.

Sharon and her middle child Mrs. Nisky made their famous Nisky’s Biscuits as well. Nisky’s Biscuits have two ingredients, two, and they are the flakiest, tastiest biscuits ever. Have you ever made delicious biscuits with 1) Self-rising flour and 2) whipping cream? Neither have I. I will be making them soon, however, because Nisky’s Biscuits are easy and yummy.

I made my favorite salad, Panzanella, that’s the most wonderful salad I’ve ever tasted and that is no exaggeration. If you want to make something that everyone will rave about and will require you to have printed copies of the recipe nearby each time you serve it, go to the Food Network’s site and check out The Barefoot Contessa’s recipe for Panzanella.

I also made a staple that I’ve been making for at least twenty-six and a quarter years: Stuffed Baked Potatoes. Many of you probably make your own version of these, but I’ve been surprised lately to hear of enough people who’ve never made these, so I thought I’d share. Stuffed Baked Potatoes are easy and most people think they’re fancy and delectable. I make them at least twice a month – they’re a nice change from regular baked or mashed potatoes.

Sharon took the photos of my Easter journey through Stuffed Baked Potatoland, and I hope you’ll try them and let me know how they turned out for you. 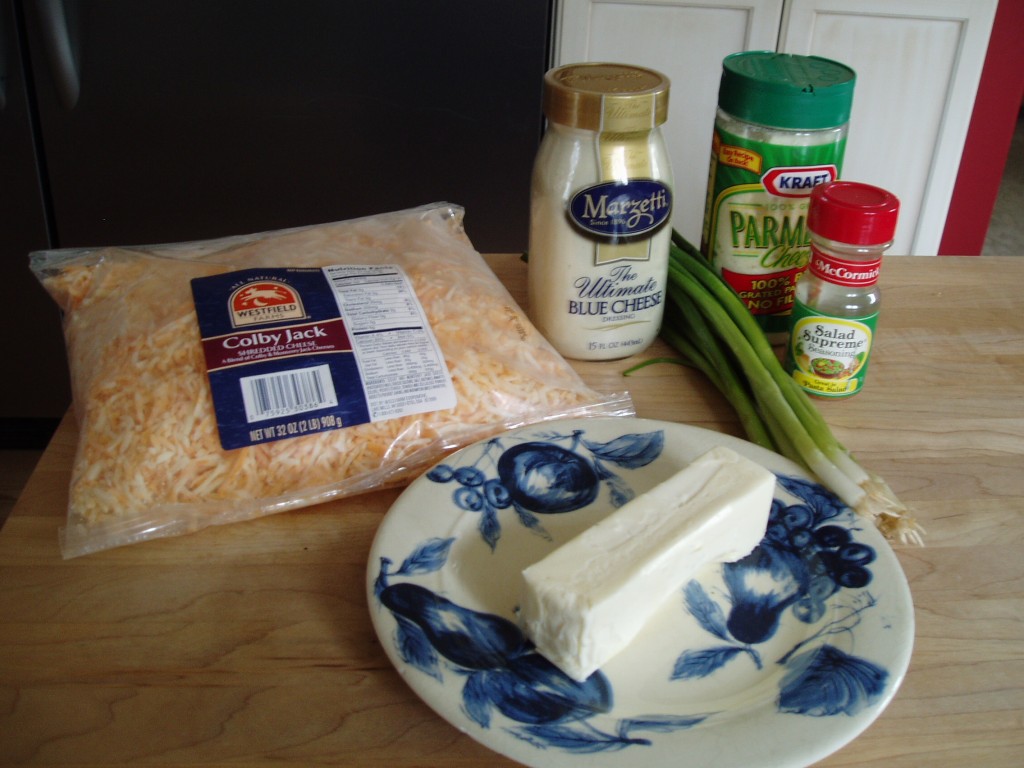 First, bake your potatoes. I have two ovens, which comes in very handy on holidays. I baked my large baking potatoes in the smaller upper oven (you can see the pizza stone I store there) while the not-so-ho-hum ham was cooking in the larger oven below. 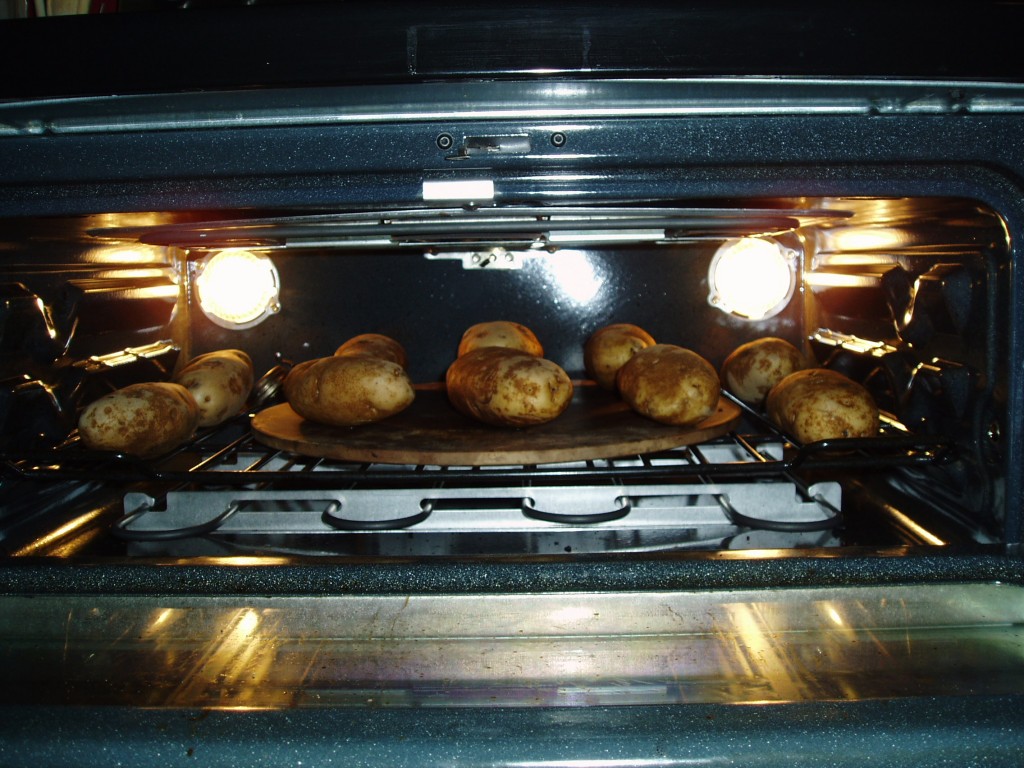 While your potatoes are baking, take some green onions and chop them up pretty fine. I used about 4-5 onions. One nice thing about this recipe is that you can just put in as much or as little of everything as you like. Experiment with the flavors and adjust as you go. You’ll see how I did that later. I use the green and the white of the green onions. Some people call them scallions but I never have. Maybe one of you can tell us why they’re called scallions – is it a regional thing? I don’t care as much for that name because it reminds me of the word scallywag, and the word scallywag reminds me of a certain person that I would prefer not to be reminded about when I’m making Stuffed Baked Potatoes. 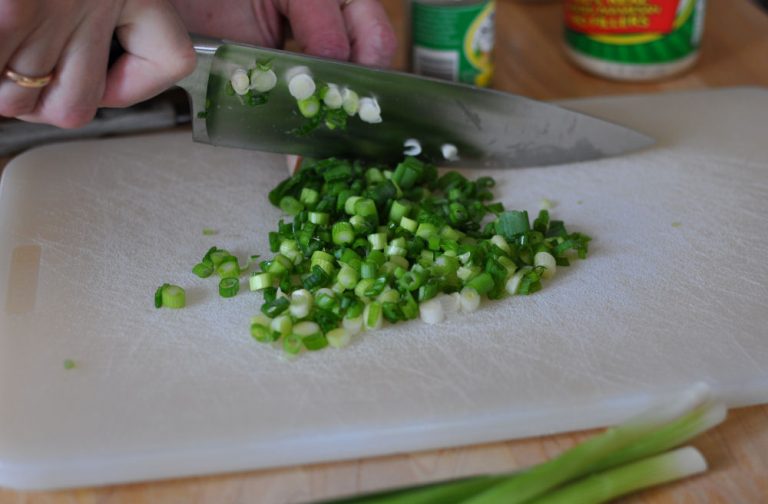 This next part is important. Have all your ingredients ready in a bowl while your potatoes are baking, because it’s the heat of the baked potatoes that will cause everything to melt together nicely. Below you can see that I tossed in about two heaping cups of grated colbyjack cheese. We were feeding a lot of people on Easter. 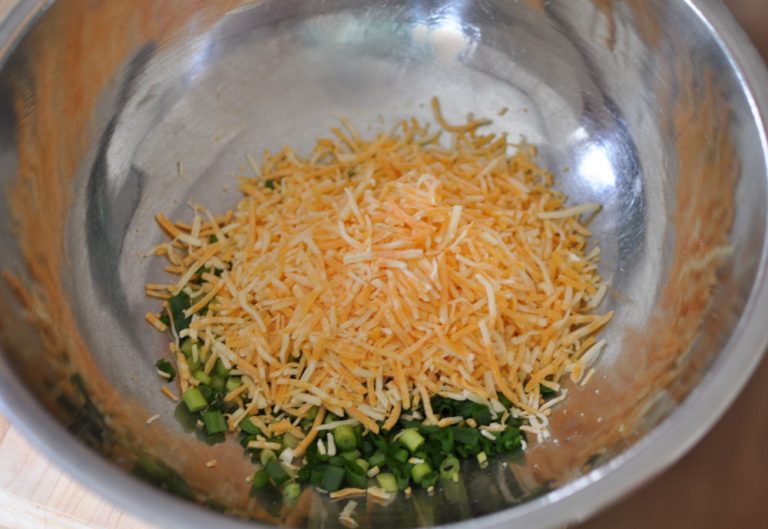 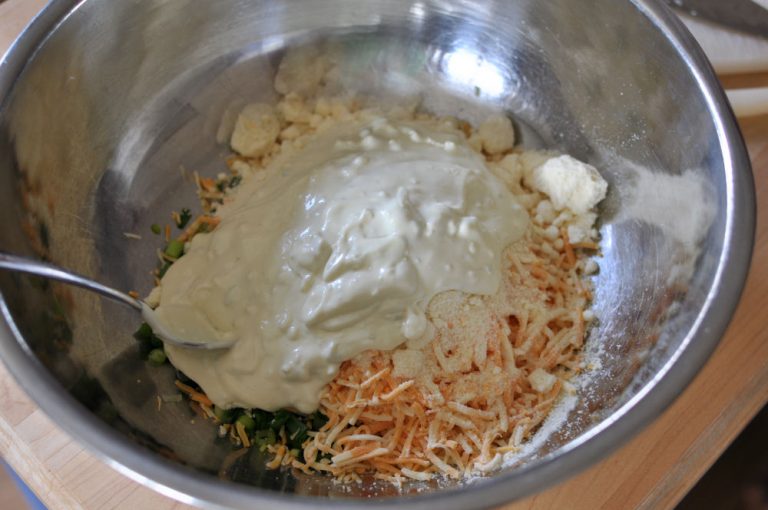 If you look closely now, you can see that the first potato is in there (I’ll get to that in a minute) and I also threw in about 3/4 of a stick of butter. This is Easter, so don’t worry about fat grams. You could worry about that the day after Easter. Oh wait – Easter is already past. Well, don’t worry about things anyway. 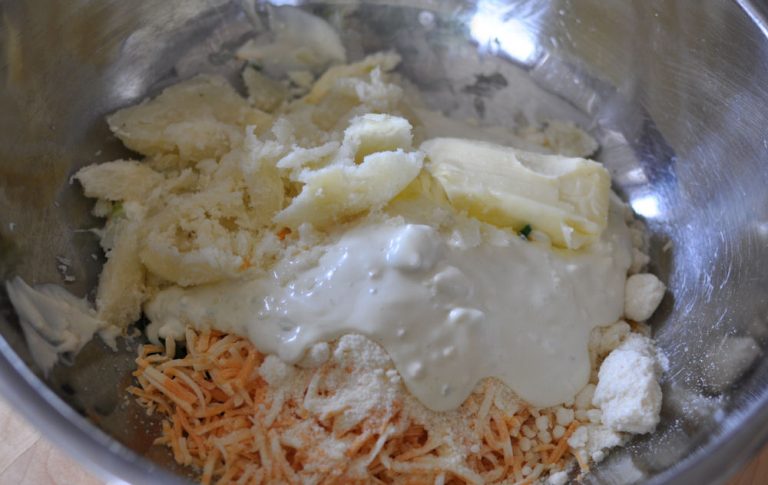 Now I just started to mash things together a little bit. My potatoes were done baking. I smooshed things around with the fork while my daughter took photos with her very nice camera that she uses on her very nice website for her very nice yarn business. 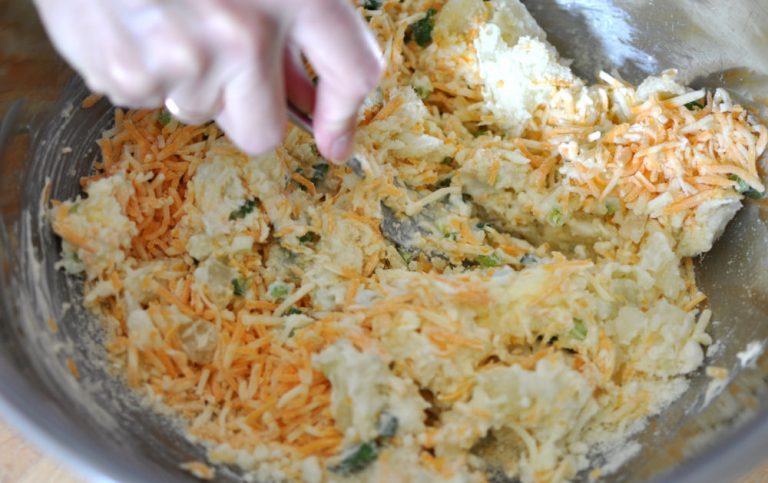 When the potatoes are done, I take them out one by one, hold them in an oven mitted hand, and gently cut them in half, taking care not to ruin my beautiful oven mitts. 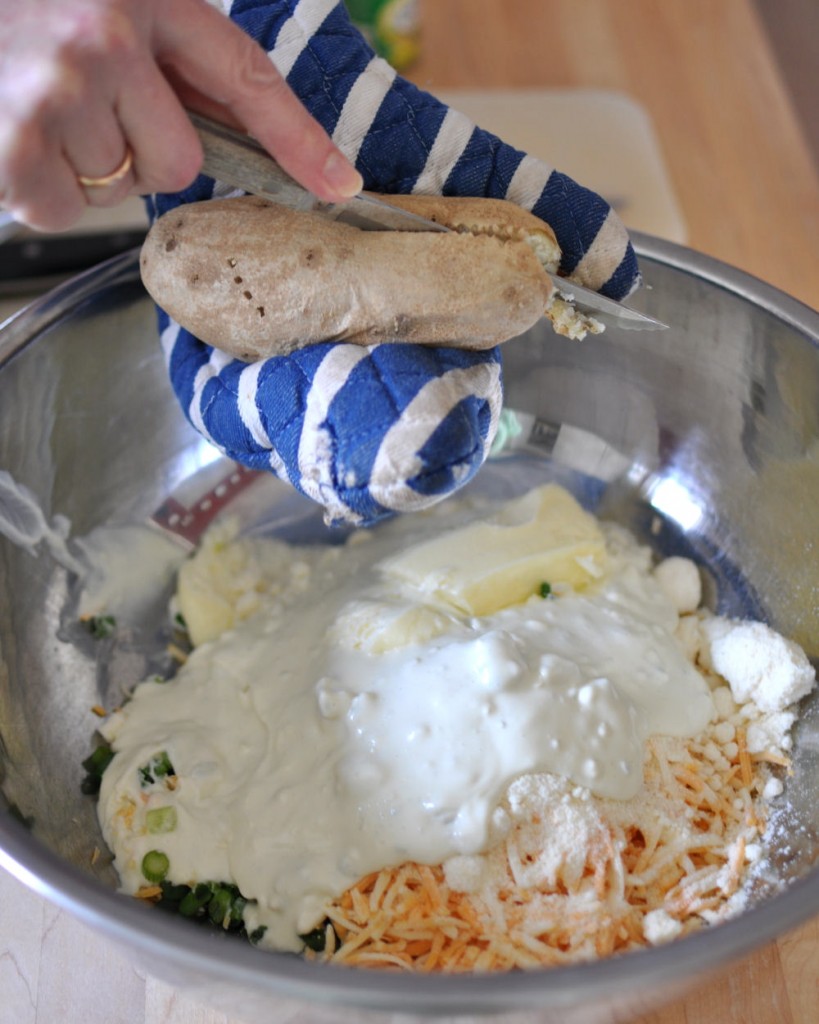 I take a large spoon, and while cradling the hot potato in my mitt (please try not to notice the holes in my mitt) I gently scoop out the very hot potato innards.  I try not to ruin the skin, but sometimes it happens. See how there’s very little left of the innards? Then you can just set these forlorn looking skins on a baking sheet. 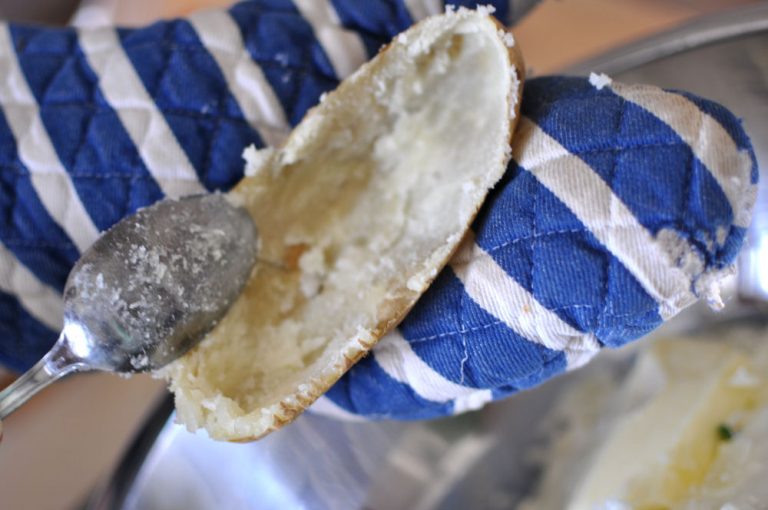 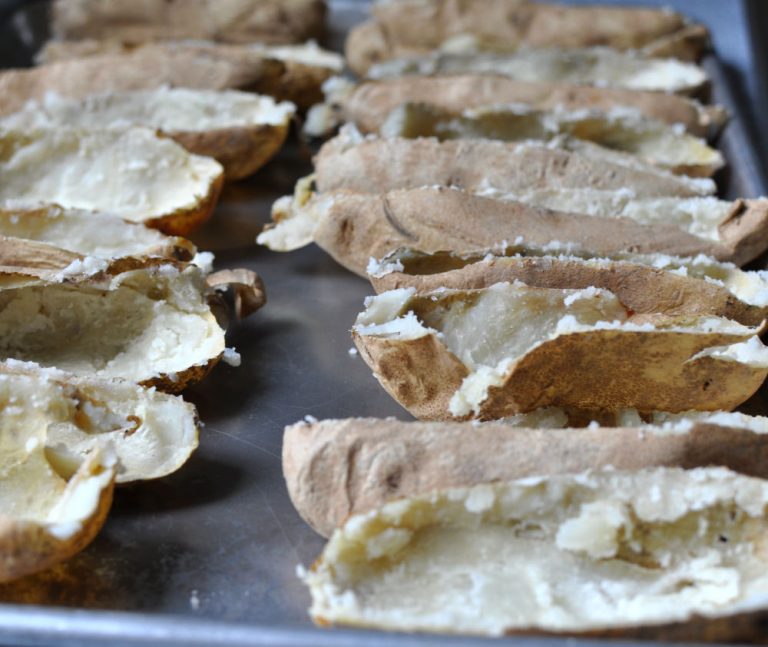 Because I have made this recipe hundreds of times, I can tell by looking if it’s what we’ll like. I could see after smooshing and mashing that for the number of people we were going to feed, we needed to add another handful of cheese. Just stir and mash with a fork until the hot potato innards have melted most of everything, and until you don’t have any clumps of unmashed potato left. If you do, that’s okay though. Potato clods never hurt anyone. 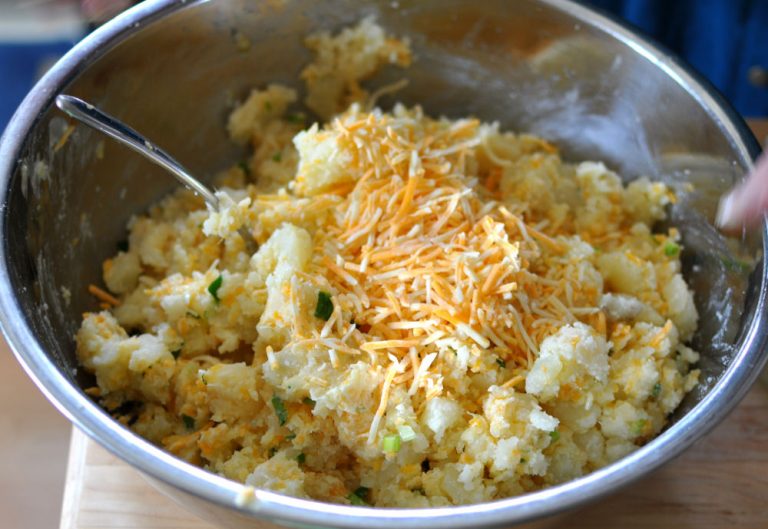 Now you can take your holey mitts off and start to fill the empty potato skins. The mixture will be cooled off enough to use your hands. Grab a few globs of cheesy goodness and press them into the potato skins. 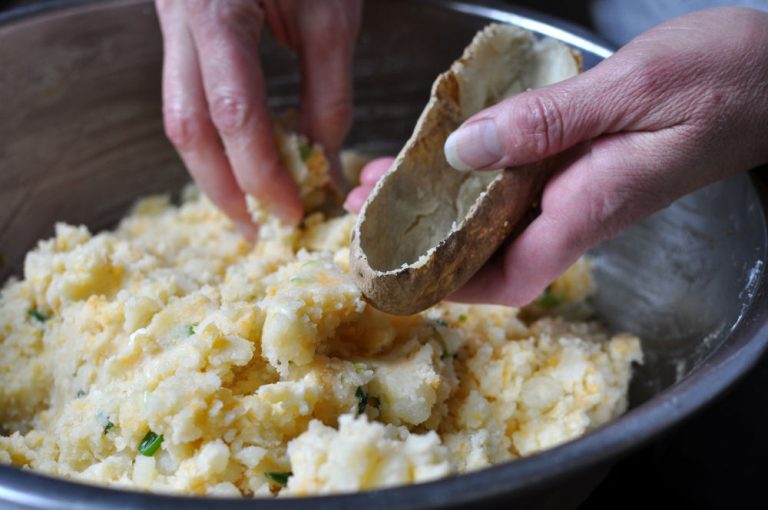 Make sure you delicately lift your little finger as you do it, as a polite Englishwoman would do when sipping her afternoon tea. I’m not sure why this important, but just take my word for it. 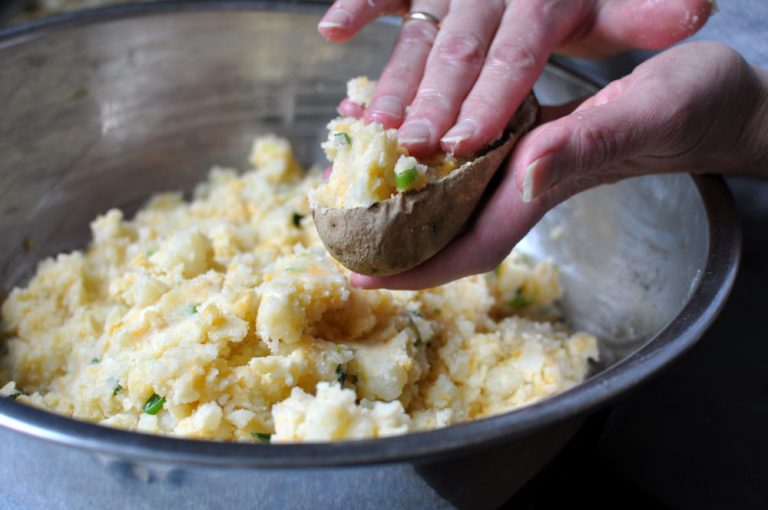 When you have enough in a skin, it will look like this: 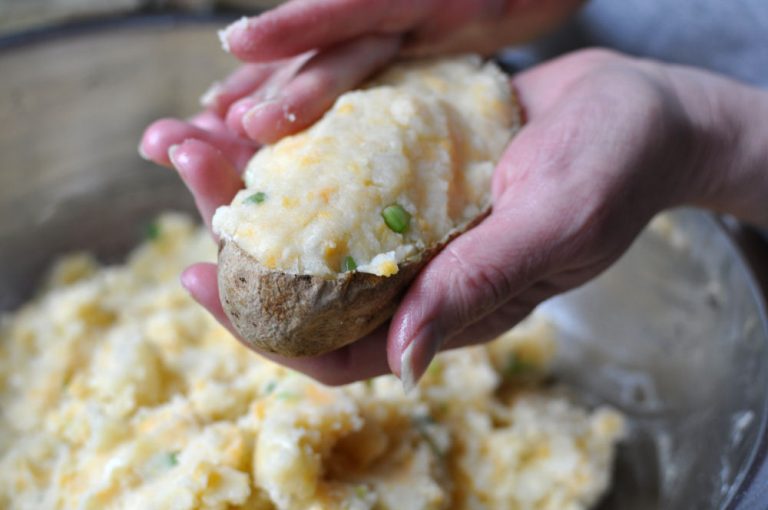 Not too much – just a little mound of the potato/cheese mixture will do. 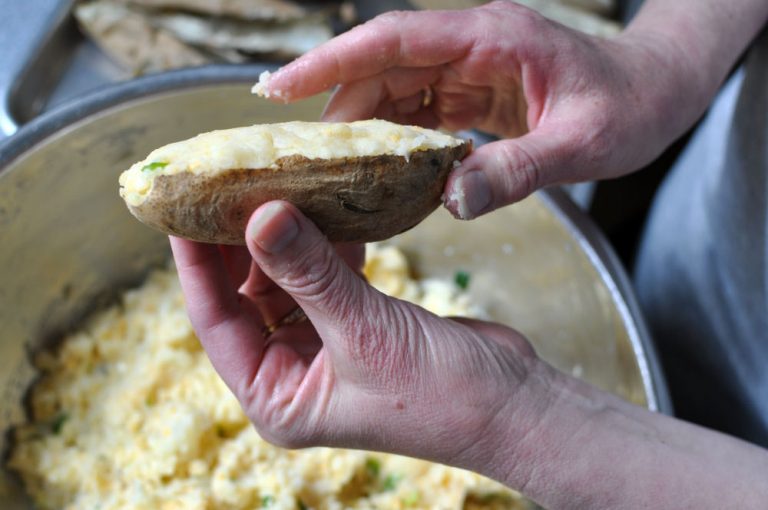 You can find this product in the spices aisle at your grocery store. I’ve used it for years for just this one dish, and it adds color, great flavor and interest. It’s supposed to be for salads and pasta and I’ve never used it on either. Just on my Stuffed Baked Potatoes. (When McCormick comes out with a new product called McCormick Stuffed Baked Potato Topping, maybe then I’ll try it on my salads and pasta.) 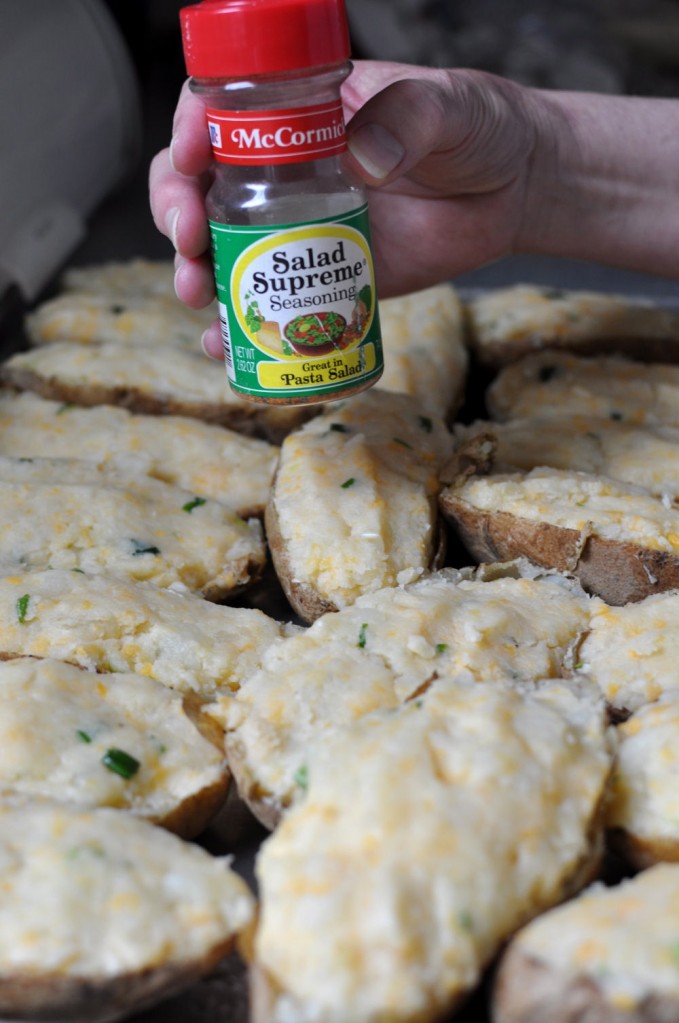 Here are all the potato halves, stuffed with that delicious cheesy mixture, sprinkled conservatively with the Salad Supreme, and lined up ready to go back into the oven. If you lean to the left politically, then you could be a liberal sprinkler. For the most part I’m a conservative sprinkler. 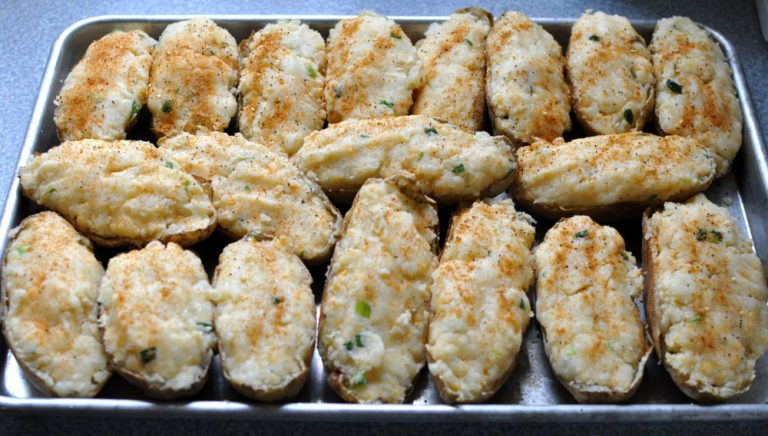 I then bake them at about 375 or 400 degrees (I can’t remember which) until they get hot all the way through, maybe about fifteen minutes or so. Then about five minutes before I’m ready to serve my Stuffed Baked Potatoes, I turn on the broiler and begin to watch them carefully. I want them to get just a little bit darker and start to bubble. You could let them get browner than this if you like – just keep an eye on them. 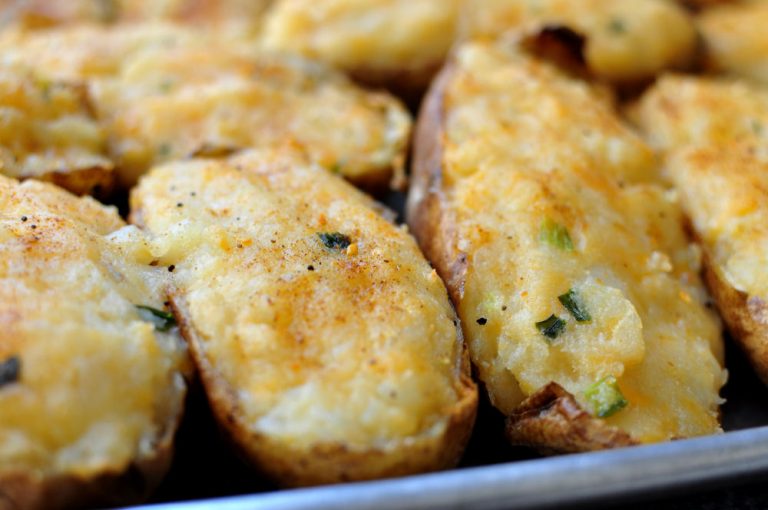 Above, I took them out and thought they needed another two minutes under the broiler. Here’s the final result below: 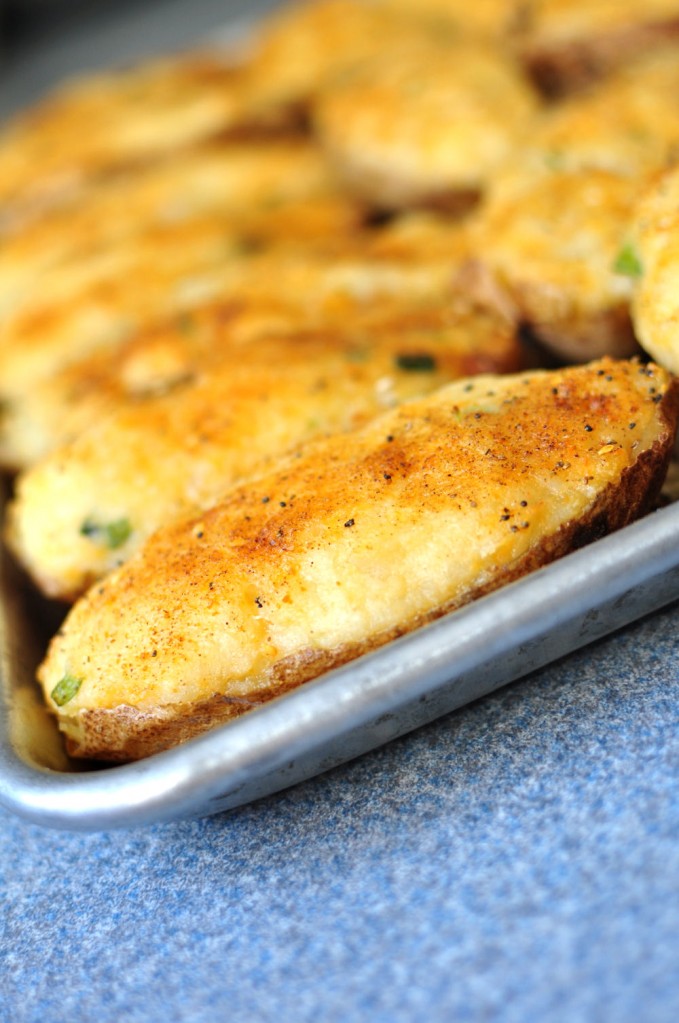 And they are all gone.

These also freeze really well, reheat really well, taste good the next day for leftovers, and some people even like them packed in their lunches.

How do you fix your Stuffed Baked Potatoes?

Sharon and I were talking about all the variations that would be good with these – bacon bits, broccoli, rosemary, and a few other things I can’t remember now. What else would you add to your Stuffed Baked Potatoes?

Let me know if you try them.  Have a wonderful week…