We’ve had some very heavy rain lately, with flash flood warnings. That seems like nothing compared to the devastation we watched on the news this morning in Oklahoma. As I sat there in my plaid flannel nightgown with a hot cup of tea in warmth and safety, I prayed for the people there, especially those who have lost children. What can people like Michael and me do for those who are suffering? At this stage of our lives, all I know to do is pray and send money. And to not take for granted this day we’re given, because there are no guarantees that we won’t be the ones needing help and comfort another time.

On to more trivial things — Michael and I bought a juicer recently. We’ve watched several mind-blowing movies that have opened the door of my previously tightly closed mind just a crack, and I’m incorporating a few new things into our days that I would never have considered before.

Part of my motivation stems from some obvious signs in past years that my immune system is lagging. I’ve written before about how I was diagnosed with an immune system disease in 2002 called Sarcoidosis, which thankfully went into remission (or disappeared completely!) after about a year. But now when I can’t get over a cold without it turning into a weeks-long infection that needs major pharmaceutical intervention? Not good.

When my children were very young I was a whole foods kind of mom, and they didn’t eat sugar and most refined foods. We ate lots of fruits and vegetables and whole grains. When we moved to Minnesota I began to let things slide because the food culture here was so different from Southern California. And I guess it has been downhill ever since. We still eat fruits, vegetables, raw nuts and seeds, love salads and eat whole grains, but I have become lax in many ways regarding meal prep.

After watching this, this, this, and (be forewarned there’s a bit of language in this,), I’m trying to make one green juice a day for Michael and me. I love green vegetables and crave salads, but drinking anything green and grassy smelling has always made me gag. To successfully down a green drink would usually take me thirty minutes and lots of begging God. Michael used to drink Barley Green every day and loved it — he’s not put off by the agricultural fragrance or flavor of green drinks at all.

Here’s what we’ve been having, and because of the fruit in it, I can actually drink it down within three minutes (Michael guzzles his) and still be standing upright and smiling afterward:

I have added the juice of a lemon at times and have also used organic romaine, which is a bit milder than the kale. Today I’m actually soaking some chia seeds to use in tomorrow’s juice.

I also still eat pizza, drink milk very occasionally, and had a Culver’s Butterburger last week, so the changes I’m making are very slow changes. But it can’t hurt us to add an enzyme-rich, vitamin and mineral-rich green drink to our diets, and we’ll see how it makes us feel and whether or not we experience any really noticeable health differences.

I’ve also read many times from different sources that our American diets cause our bodies to be very acidic, and eating foods that are alkalizing is a good thing. So Michael and I have been drinking melon smoothies, and we LOVE them. Three ingredient yumminess! 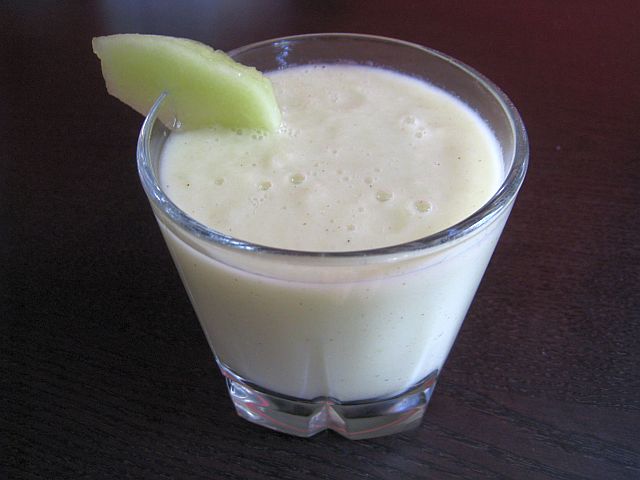 1.  I cut up a ripe honeydew melon into ice-cube sized chunks and freeze them.

2.  When it’s time for a smoothie I let the honeydew chunks thaw for about 15-20 minutes, just until they’re not rock hard anymore.

3.  In a blender or Nutribullet (we have both and the latter works better for this) I pour unsweetened almond milk and a little honey, and blend it for a few seconds.

4. Then the honeydew chunks can be thrown in and blended until completely smooth, and more almond milk can be added until the mixture is pourable.

I can’t tell you how rich and refreshing this tastes to us.

So enough about juices and smoothies, now I want to tell you something cute and funny. We had our 10 year-old grandson Mr. McBoy over for two nights recently, and we had such a good time with him. I taught him how to play Gin Rummy, he beat me at Farkle, we read books together, listened to G.T. and the Halo Express CDs while the rain beat against the windows, and just enjoyed each other’s company. On Saturday evening I asked Mr. McBoy if he would massage my feet for me (he is known for his strong hands and cheerful willingness to give hand and foot rubs), and he readily agreed. I thought five minutes would be generous of him, but he rubbed my hands and forearms, ankles and neck, and then offered to rub my back if I would lay down on the floor while Grandpa watched Gunsmoke nearby. I did. After a few minutes of my teetering on the edge of a blissful coma, Mr. McBoy said, “Grandma, I don’t mean to be gross but if you want, I can massage lower on your back, near your gelatinous magnus.”

You know what he was trying to say, don’t you? I chuckled and said, “You mean my gluteus maximus?” and he giggled when he realized his mispronunciation and said, “Oh yeah, I meant that.”

I declined his offer, but I think I’ll always remember what he said. It will be something we’ll get a kick over many years from now. I told Mr. McBoy that gelatinous magnus is probably a much more accurate term for my backside than the correct anatomical term. 🙂

I love a good malapropism (the act of using an incorrect word in place of one that is similar in pronunciation), don’t you?

I know a little girl who used to say “I don’t want to take anything for granite.” I have a friend who heard someone else comment in a theater while watching Schindler’s List: “Oh how sad, look at all those emancipated people!” I have someone in my own home who says, “It’s cold outside and I need to get all bumbled up!”

How about you? Can you think of a malapropism you’ve heard or one you’ve said yourself? If yes, why don’t you sit right down on your gelatinous magnus and leave a comment telling us what it is?

I can’t wait to read all the perpendiculars! 😉