Full speed ahead or slam on the brakes? — My Kidney Donation, Part 3

Tuesday was slated to be a full day of tests for me — chest X-ray, EKG, more bloodwork, and meetings with lots of Mayo people. I met with my transplant coordinator Kay, who will follow me (her words) for the rest of my life, checking in, arranging appointments to monitor my health and kidney function over the coming years. I met with a social worker, probably checking to make sure they still think I’m stable enough to donate an organ. I signed a release giving my email address to my recipient in Madison, and whether or not he/she decides to write to me is yet to be seen. I would love to know more about the person who receives my kidney. 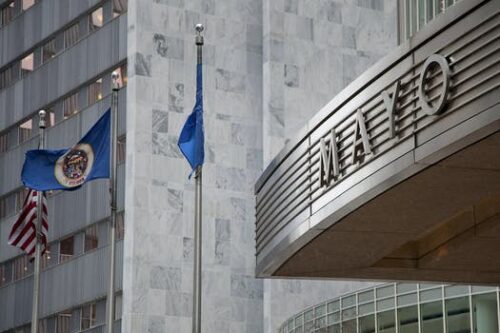 The most noteworthy appointment was with a transplant nephrologist (not the surgeon), who decided at the eleventh hour that I needed a chest CT scan and a mammogram, even though I had both of those tests a little over a year ago.

I won’t go into thousands of words of details because it would be boring to most, so I’ll just go into hundreds of words of details. In the early 2000s I was diagnosed with an autoimmune-system disease called Sarcoidosis. Weird and icky symptoms took a year of doctoring before someone finally said this is what I had. When I came down to Mayo to be screened for kidney donation last year, this same transplant nephrologist saw the residue in my lung x-rays of what my doctors in Duluth had always said was Sarcoidosis, and he had a different idea. He ran additional tests that revealed a surprise — antibodies in my blood showing I’ve had Coccidioidomycosis, a fungal infection that can be quite deadly, also known as Valley Fever. It’s contracted by breathing in fungal spores from disturbed soil (as in what would be found at building sites) under windy conditions, specifically in the Southwestern part of the United States. And the symptoms are almost identical to Sarcoidosis, which I now know I never had.

Years ago my family doctor in Minnesota never thought of Valley Fever because he didn’t know I was born and raised in Southern California, and that I’ve gone back to visit numerous times. So sometime around 2000-2002, I went to visit friends and family in SoCal, inhaled some spores in the wind, and returned home and was truly ill for six months, some days so bad I didn’t get out of bed except to go potty.

Thankfully I recovered, but the reason it’s relevant now is that the transplant team wanted to make sure what they saw in my chest x-rays is the old, calcified residue of fungal infection in my lymph nodes, not something active that would affect my recipient, who would then have to take an anti-fungal med for a year. I sat for over thirty minutes in the nephrologist’s office while he made two long phone calls with infectious disease specialists, giving them my info, and it sounded by Tuesday afternoon that whether or not I’d be allowed to donate was questionable. I couldn’t help but wonder why this uncertainty was saved until the day before a scheduled transplant and donation, with entire families uprooted and settled into their rentals, barrages of tests behind them, a donor and recipient ready for surgery in Colorado and Wisconsin as well. I was told not to worry too much, that the chances Chris’s transplant would be scrapped were slim, but that my chest CT scan would be read by a specialist that night and I would be called around 9:00 p.m. with results and final decisions.

I texted a few close friends and asked them to pray, because the thought of my son-in-law Chris being told things weren’t working out broke my heart. I’m so thankful for friends who pray and care. I have to admit, I sort of panicked inside instead of immediately praying and placing my trust in the Lord. I would like to get to the place where when something dire happens I go to the Lord in confidence right away, but I am not a very mature believer at times. I’m still learning.

I was finally called that night and informed that my CT scan looked unchanged from last year’s, indicating that I probably don’t have an active Coccidioidomycosis infection, and I should arrive at the hospital at 5:30 for admission on Wednesday morning as planned. I was so relieved.

I showered with a special pre-surgical scrub called Hibiclens Tuesday night and went to bed early, setting my alarm for 4:00 a.m. I was to take a second shower on Wednesday morning, scrubbing with Hibiclens again.

I realize how monotonous these accounts are, so feel free to yawn and click away.

I’ll share about the day of the surgery next time. Thank you for reading, and especially for your prayers!