I read a fun blog post the other day about ten odd things that people might not have known about that blogger. I thought I would try the same except I’ll only bore you with five.

Here are five (sort of) odd things about me:

1.  I have long had an aversion to clowns. It’s not a true phobia because I don’t run screaming from them when I see them (not that I see that many clowns hanging around my neck of the woods), but I think they are truly creepy and not fun or jovial at all.

2.  I have always liked to go fast. All the wheel-based things I’ve ridden in my life — my skateboard when I was eight, my bicycles, my Vespa motor scooter when I was a young teen, my Opel station wagon which was my first car — I’ve loved the thrill of speeding in them. I love roller coasters and super-high water slides, and know I would love sky diving if I could be certain of a good outcome. I don’t necessarily go fast anymore. I’m a cautious driver who mostly stays under the speed limit now that I’m older. But even at my age (57), no one would have to talk me into going on some ride that goes upside down, all around, and 80 miles per hour. I’d be ready in a minute.

3.  I have learned to like a lot of foods since I moved to Minnesota in 1981. I was a picky, non-adventurous eater as a child, and still in my early twenties had not ever tasted broccoli, asparagus, beans, fried eggs, raw tomatoes, cucumbers, mayonnaise, or raw onions. I began to see how limiting and foolish this was, so I started making myself eat all kinds of things I’d always thought were “icky.” I developed a taste for all of the above and more, but there are three things I’ve never been able to like, even though I’ve tried many times. So all that to say, I hate tuna, beets and lentils. I have eaten them when I’ve been served these things at peoples’ homes, but I’ve had to silently pray that I could get them down without bad things happening.

4.  I am not fond of the months January and July. I know that sounds ungrateful, since life happens during those months and that is a gift from God. But I experience a sort of visceral wince when I think about those months and I breathe a sigh of relief on the last days of those months. Like today! Yay! No more January this year! (And no trauma has occurred in those months to make me feel this way. I have loved ones born in both of these months so this has redeemed them for me….I think my odd feelings are more weather related than anything. Simply put: January is waaaayyyy too cold, and July is waaaayyy too hot.)

5.   I am a meaning addict. I have this built-in tendency to believe that everything means something, that even the most insignificant things can point to something bigger or other. I look at trees and see them pointing upward, picture their roots going ever deeper for water and nourishment, and of course I see the ways of God in all of that. I read about the precise placement of the two hydrogen atoms on one oxygen atom that forms a water molecule, and how if the hydrogens didn’t bond at the exact angle they do, nothing as we know it would even be. And I think, what does that mean? Apart from the obvious, what does that mean? Thursday night at my monthly SAGs meeting with my friends Pat, Gail and Lorna, a very brief mention of the McCaughey septuplets came up when we were talking about babies. We spent maybe ten seconds on the McCaughey septuplets. The next morning I was reading the news online, and a link about the McCaughey septuplets popped up. Some people call this synchronicity, and it happens to me all the time. But I want to know….what does this mean?

Hello? Are you still with me? 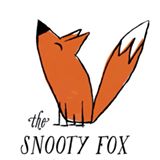 I will be meeting my dear friend Su for a cup of tea this morning at The Snooty Fox. We have made a new verb together from the title of this little establishment. Snooty is of course known as an adjective, a descriptive word telling us about the fox. But Su and I now say that we are going to snoot. Do you snoot? I am going to begin snooting today, and will snoot with all my might.

And now I ask you, what does that mean?