I’m grateful for a Monday morning at home, no appointments, no company coming, nothing tugging at me. Except foster care paperwork and four sessions I’m writing and praying about for a women’s retreat, and a couple of untouched books and a kitchen sink full of dishes. Just those things. 🙂

It has snowed off and on for days, and this morning when I woke up I couldn’t see the front steps that lead to my house. If I were a younger woman I’d be all bumbled up (as one of my fosters says) and doing the shoveling myself, but those days are behind me. Especially since my back has been healing and I don’t want to undo that. It’s seventeen degrees above zero and since a couple of weeks ago we had twenty-eight below with sixty below wind chills, this seems like a gift. The forecast for my city says one to three more inches of snow tonight.

What’s the weather like where you are? I see online friends posting pictures of spring flowers breaking through the ground, but in northern Minnesota we are months away from that.

My oldest daughter Sharon and her husband Chris recently took a trip to Maui, and their three daughters stayed with me. I felt bad that the worst of the cold weather prevented us from doing much outside, so we watched more TV than I preferred. We also played Farkle, Backgammon, Gin and Uno. 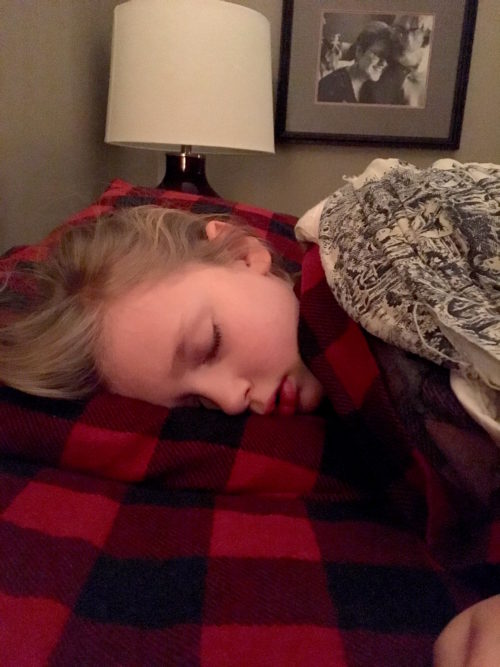 Here’s six year old Weezer, fast asleep next to me. She and I read quite a bit from the Mrs. Piggle-Wiggle books, and a few chapters from Charlotte’s Web.

Her older brother calls her Louis and some friends at school call her Lisa, and she isn’t thrilled about that. She told her mother recently that people can call her Louisa, Weeza, Cheetah or Snoodlepoop, but not Lisa. She is so good-natured and I am having a difficult time watching her grow up so quickly.

Here’s a picture Sharon took a few weeks ago when we were celebrating Carolyn’s birthday.

They are twenty months apart and are so alike, and so different. I love observing the women they’ve become, and learn so much from each one. They have both comforted and wisely advised me now that I’m nearing my dotage. And they make me laugh. 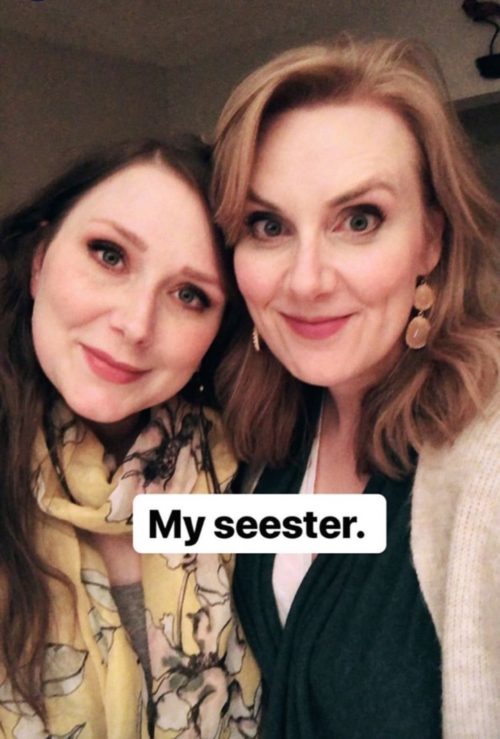 It’s surprising how many people have told these two girls that they look like twins and are hard to tell apart.

Sharon is blonde and is six feet tall, Carolyn is a brunette and is 5′ 10″. They obviously look like sisters, but our family has never been able to understand the twin thing. Both of them have had strangers approach them and think they were the other.

What do you think? Do they favor each other a lot? Is it so much they might be twins?

Carolyn is mother of seven (six on earth, one in heaven) and Sharon is mother of four. They have made me rich in grandchildren and love.

Our elderly Schnauzer Mildred has struggled with our bitterly cold temperatures. We noticed that if it was colder than 10 degrees out, she would run out into the yard to go potty, but then would get stuck and have a hard time walking back in. It is treacherous to go outside quickly to pick her up and bring her in, when there’s a layer of ice under the snow and it’s frigid enough to cause frostbite in less than a minute.

So my youngest daughter Sara bought booties for Millie (not shown in the picture below) that she hated because of the Velcro sound. And next Sara brought home a puffer jacket, which Millie was thoroughly delighted about. Can’t you see the pure joy in her schnauzery face? 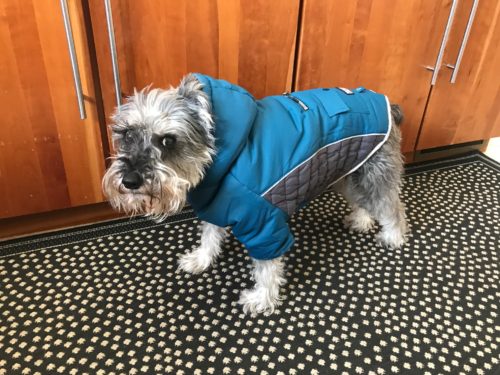 It took several times for Millie to adapt to her winter wear, but oh, what a difference it has made. She submits to the donning of the booties and jacket now, and can be outside more comfortably without getting stuck. We are so proud of her.

Sara has been going to college, working, and fitting in a few fun things whenever possible. I so appreciate the help she gives me around the house, and the respite care she provides when I need a little work break. 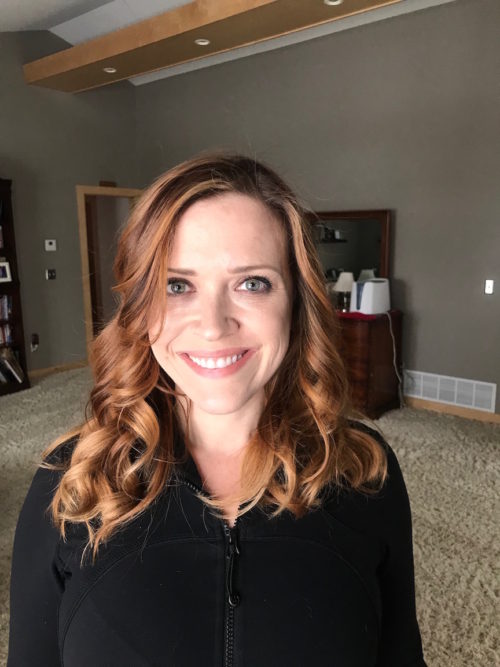 She and a friend are taking a belly-dancing class together, and she comes home and shows me what she’s learned. Apparently belly dancing has very small, precise-yet-jiggly movements to it, and is not at all easy. We’ve had some laughs when Sara tries to instruct me in the small, precise-yet-jiggly motions. I am doing well in the jiggly, but the small and precise elude me.

Sara and I have been looking at pictures of Michael and reminiscing a lot lately, because the four-year anniversary of his death was on February 9th. How is it that my beloved husband has been gone for over one thousand four hundred days? She has been counting her blessings because she felt unconditionally loved by her father, and I have been thanking the Lord for all He’s done in my life through Michael.

For those who grieve, the pain does fade. Tears still come for me, but I don’t feel that desperate, raw sorrow that I did four years ago. As I put on my Instagram account recently, no matter what happens, I will always be Michael’s and he will always be mine. 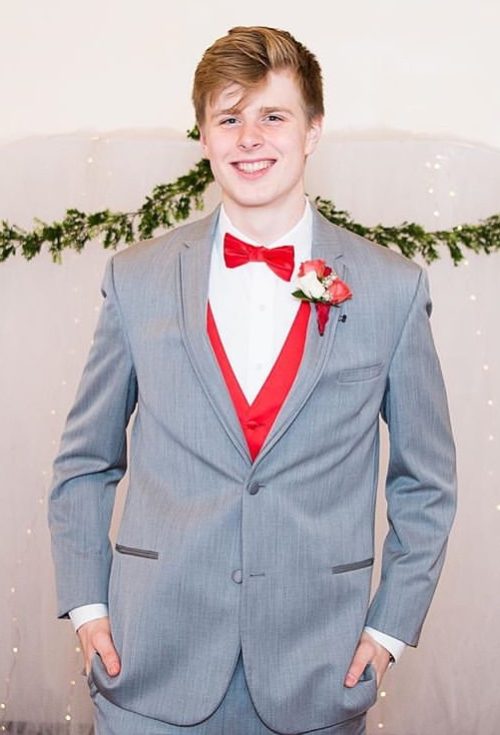 My oldest grandson is going to be seventeen in a couple of months, and he has a very sweet girlfriend. They went to their first Sweetheart Dance at their high school last month, and since Carissa’s dress was red satin, she asked Mr. McBoy to rent a gray tux with a red vest and tie. Plus, their school colors are red and gray, so I guess they were totally sick. When I was his age we said far out and cool and outtasight. Now they say sick.

Mr. McBoy is 6′ 5″ tall and the doctor says he’s not done growing. He played high school basketball but loves football more, and enjoys singing in his A’capella choir. If anyone reading this knew my father, you might be able to see those Sooter genes beaming out in that face. I’ve been told that Mr. McBoy resembles his grandma, and once in a while I get a fleeting glimpse of that. 🙂

I see the sun rise over Lake Superior almost every day, and it never fails to give me a thrill. Here’s a picture I took a couple of weeks ago when the morning temperature was twenty below zero and the ice was beginning to form. If you enlarge the photo, you can see the ice on the surface. 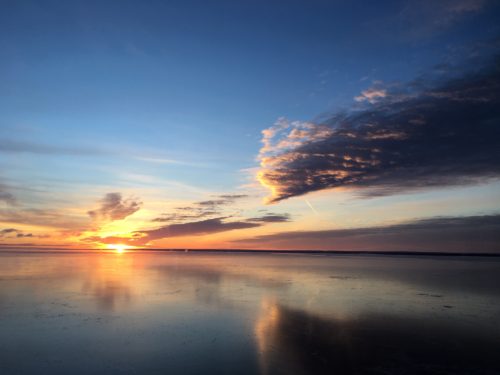 Since then, the Lake has frozen solid enough to beckon brave ice fisherpeople to set up their ice tents, drill holes in the ice and sit for hours waiting for a bite. There must be a lot of biting, because a couple of days ago I drove by a portion of Lake Superior and there were over a dozen tents and even more people standing out there, mere yards from the open water.

While my granddaughters were with me (twelve days, the longest visit so far), fourteen year old Mrs. Nisky drew this for me. It took her less than an hour. 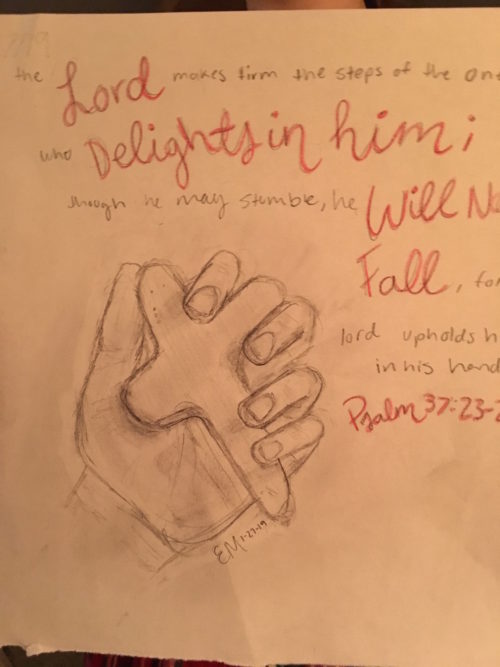 I have a wonderful carved cross my friend Ember gave me, just perfect for holding in a closed hand while praying or pondering the love of Jesus. Mrs. Nisky drew this of her own hand holding the cross, and chose this verse, which I took as a word from the Lord to me. I am going to have this framed and will hang it in my room.

Mrs. Nisky plays the cello and is on the girls basketball team at her high school. She has the most beautiful copper colored hair and eyes, and has been a blessing to me from the day she was born. I don’t mind at all either that her middle name is Julia, sort of after me.

Speaking of sunrises, Lloyd sent me this picture taken from his bedroom loft window in his cabin in the woods. Isn’t that breathtaking? 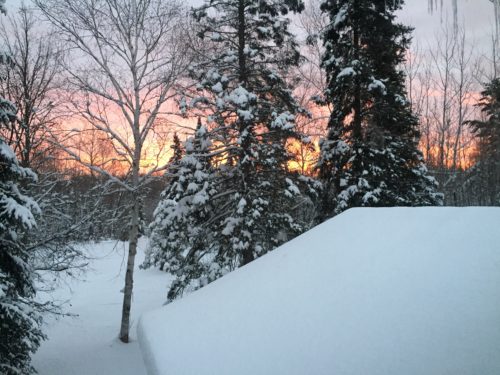 He gets up every morning and makes a cup of coffee, suits up and goes outside to feed the birds, deer and wild turkeys that wait for him to thump on the bucket to let them know breakfast is served. After he spreads the corn and seed around, he goes to his huge shop/guest room and builds a roaring fire in the wood stove to keep the in-floor heat from freezing, and by the time that is done, over a dozen turkeys have come in to feed. When they’ve had their fill they roost in the trees surrounding Lloyd’s home, and then they all walk jerky-turkey across his pond and back into the woods. I enjoy the pictures he texts to me from fifty miles away.

Well, laundry is calling, my work on the April women’s retreat is waiting, and I haven’t had breakfast yet. I think a small bowl of Muesli sounds good. Here’s the recipe if you’re interested.

How are things with you?