“Bring them here to Me…”

A few years back I was curled up on the couch very early in the morning, with a little fire burning in the hearth and my Bible open in front of me. I was reading from the first chapter of John, preparing for a lecture, and something lit up on the pages. I read that in the earliest days of Christ’s ministry, Andrew and John spent many hours with Jesus. Whatever it was they discussed with Him, it must have been so profound, because the first thing that Andrew did was run to find his brother Simon and tell him, “We have found the Messiah!” The first part of verse 42 says, “And he brought him to Jesus.” In the Greek, the word brought suggests that Andrew grabbed his brother by the arm or the hand and pulled or tugged on him. And he brought him to Jesus.

As I was meditating on this verse, another one came to mind. It’s in Matthew chapter 14, and is the story of the feeding of the five thousand. After a long day Jesus told his disciples to give thousands of people something to eat. The disciples were stunned, wondering how they would ever procure an amount of food so great, but one of the disciples, Andrew as a matter of fact, found a small boy who had some food, and Andrew told Jesus what he was able to come up with — five loaves and two fish. Hardly enough to feed five people, much less five thousand.

What was Jesus’s response to that meager discovery? He said, “Bring them here to Me.”

And when the humble offering was brought to Jesus, He gave thanks and began to break the food apart so the disciples could distribute it. Thousands of people were fed, and leftovers were collected.

As I sat on my couch reading this in the morning dark, I pondered what this could mean to all of us. Who doesn’t have great needs in their lives? Do we find we only have loaves and fishes provision yet a massive crowd kind of need? What lack or emptiness or great gaping needs do we face? I have some desperate needs myself right now, as I’m sure most of you do as well. That is life.

But in that moment on the couch, all three of my cherished daughters came to mind. Just like anyone else, they each have different needs, but they’re things that I can’t give them anymore. When they were little it was so easy to fix a snack when they were hungry, put on a bandaid when they had fallen, and show them how to spell a word or to correctly figure an equation. Now they’re grown women with grown up lives, responsibilities and pressures, and a cheese stick, a bandaid or a well-done math problem can’t help.

My eyes filled with tears and I sensed the Lord speak so compassionately to my heart about my three beloveds: “Julie, bring them here to Me.”

And I pictured Jesus Christ, the mighty One about whom Isaiah prophesied, the Lamb of God that John the Baptist announced, the Messiah that Andrew and John dropped everything to follow, sitting right across from me in my living room. And I pictured Him huge. Full of power and love.

In my mind as I prayed for my daughters, I brought them to Jesus, one by one. 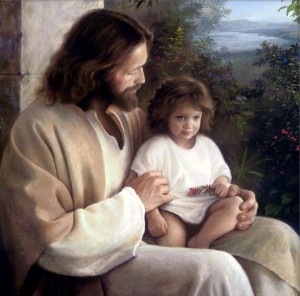 My oldest daughter is 33 years old and 6′ 1″ tall, the mother of three and so creative, yet in my mind’s eye I picked her up like I used to when she was a sleeping toddler, and I brought her to Jesus and laid her in His lap.

And in my mind’s eye I picked up my middle daughter, who is 5′ 10″ tall, 31 years old, the mother of four and so creative, and I carried her to Jesus and laid her in His lap.

“Bring her here to Me.“ And in my mind’s eye I carried my 28 year-old daughter, who is 5′ 7″ tall, beloved auntie to many and so creative, to my Savior, and placed her carefully on His lap as well.

“Bring them here to Me,” He still invites.

Sometimes, most times, I don’t know how to pray. But I remember those comforting, commanding words:  “Bring them here to Me.”

And knowing He is there and that nothing is impossible for Jesus, I pick up all those who are precious to me, and one by one I bring them to Him. My husband, my daughters, my sons-in-law, my grandchildren, my friends….

Chances are, in my mind’s eye, I’ve even picked you up and brought you to Jesus.

And until I draw my last breath, this is what I’m going to do.