An Ocular Arc and the ER

Before I talk about the ocular arc I want to mention something a whole lot more fun. Last night one of my grandchildren spent the night. Miss Louiser was apparently so excited when I texted her mama to see if Friday happened to be open on her calendar. It’s so nice when a grandchild loves you so much she can hardly contain herself! I feel the same way about my grands, but some of them are teenagers now, and as my friend Sue mentioned to me the other day, we grandmothers are about as interesting and important as lamps to our teenaged grands now. Sigh.

I picked up Weezer from preschool yesterday around 2:45, and she was so happy when I peeked through the classroom door at her, she started jumping up and down and squealing. After we gathered her things we walked down the outside steps of the school, down the sidewalk to Grandma’s blue car. I strapped her in the back seat and she chattered happily at me the whole three miles home.

She asks for snacks every thirty minutes or so, and here’s a list of what she had while she was here:

*Babybel cheese
*Peanuts and raisins in a little custard cup (did you know you can squish a raisin between two peanut halves and it looks like a hamburger for a Barbie doll? My grandkids have done this for years.)
*One half of an orange
*One carrot stick
*Three apple slices

Then for dinner we tried a new Papa Murphy’s about a block from my house. You walk in, order your pizza, they make it immediately and wrap it up, and you bring it home and bake it yourself. It’s not like you all didn’t know about places like this before, but it’s the first time we’ve been there. So I thought it was semi-newsworthy. (Pause and feel sorry for me here.) We liked the pizza all right, and then Auntie Sara brought home a Red Box movie, Pete’s Dragon, which made me cry. I would so have a pet dragon if I could. I wouldn’t want a mean dragon like Tolkien’s Smaug, but a humble dragon like Elliot would be welcome in my home if he took me on regular flights out across Lake Superior. Please watch this very brief clip and tell me if you would do this if given the opportunity.

Louiser loves to take a tubby at my house. Bubbles galore, water that comes out of the ceiling instead of a regular spigot, bath toys, and some warm snuggles with books afterward always make her happy. Her hair needed a trim and Mama said I could even things up a little, so I cut about an inch from the ends and shortened her bangs a bit while she sat quietly. Then she requested a French braid, which I gladly did.

By the time the movie was over, our little four-year old was almost nodding off in the plaid wing back chair, so we decided to brush our teeth and get ready for bed, even though it wasn’t even 7:30 yet. In less than fifteen minutes this happened: 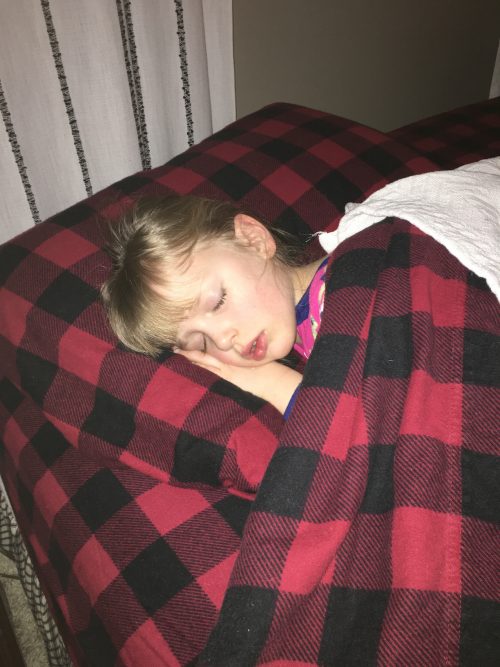 I picked up a little after I made sure she was sound asleep, then let Millie the Schnauzer out for the last time. I read a while and then after I turned off the lamp on my nightstand, I listened to Weezer’s breathing, which is so precious. Breath is precious in a precious life, isn’t it?

Around 1:45 a.m. I woke up and couldn’t get back to sleep for almost two hours. Gah. I am not a fan of that kind of night. I listened to some music on my iPhone, turned down low so as not to disturb Louiser, and when I heard my alarm go off at 7:00 it seemed like I had just shut my eyes. Little Miss slept pretty well, except for one time in the night when she turned over with the teensiest little whine and said clearly, “Nevermind!”

Today she asked for a fried egg for breakfast, and all the snack requests commenced after that, but they were all healthy ones so I just handed them out every hour or so. She wanted to watch a couple Saturday morning cartoons and explained to me that the flying lions on Elena of Avalor were not called flying lions, but Jackwins. At least that’s how I heard it. I later looked it up out of curiosity and saw that the creatures are called Jaquins; children’s programming has changed considerably since I was Louiser’s age. I watched Felix the Cat, Mighty Mouse and later, The Archies. Do any of you remember those shows?

Around noon, Mama and big sister Mrs. Nisky came to pick up Mrs. Baby. That’s another nickname Weezer has had since birth. And often her family shortens that one to just Mrs., which she happily answer to. Sara cleaned the kitchen, I did a little foster paperwork, and then I decided to move the furniture in my bedroom around. It was time for a little change, and I always enjoy the fresh, new feel a room takes on with a bit of rearranging.

We put sliders under the big mahogany dresser and that was easy. Then I decided to move the king-size bed by myself, and I realized three things immediately: 1. I am weak, 2. My carpet is thick, and 3. I can grunt very loud. I had to move it a couple of inches at a time, and finally Sara must have heard my vocal commotion so she came in and helped me finish. We moved the chairs, nightstands and lamps, and I sat down to rest and look around with a pleased expression on my face, when all of a sudden something got my attention.

On the left periphery of my left eye, I saw an arc of multi-colored, flashing bright lights. It was as if a miniscule mirror was broken, and tiny triangular shards were arranged around a half circle in my field of vision. I saw the arc, the kaleidoscope of blue and pink and silver flashes, and very pointed and geometric shapes clinging to the arc.

It looked sort of like this, but mine was more colorful, and the triangles were smaller: 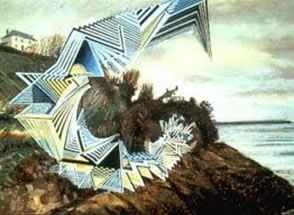 No matter where I looked, the flashing arc was there, and I thought to myself, weeelllll, THIS can’t be good, so I googled something like “flashing arc with triangles in eye,” and saw several sites that said I should see my ophthalmologist without delay. I knew Dr. Treacy’s office would be closed on a Saturday, but called for the answering service, and the doctor on call telephoned within five minutes. Since this happened right after I had physically exerted myself moving my bed, I felt sure I had done something bad to the retina. I was already mentally calculating how things would be taken care of at home with my foster gals while I was having eye surgery.

But the ophthalmologist felt certain that what I was describing to her was an ocular migraine. I had never heard of an ocular migraine and I doubted her right away since I have never had a migraine in my life, and I had just moved furniture. She was very matter of fact and said to rest a bit and she would call me back in 25 minutes to see if there was any change. When I talked to my daughter Sharon, she had just read of a case like this on Facebook, and the delay had been a bad thing for the patient. The ER folks told him he should have come in immediately. With that information, I decided to go to the Emergency Room, and Sharon offered to drive me. I am legally blind in my right eye, corrected to 20/40 with glasses. This ominous arc was in my good left eye. I didn’t want to take any chances.

So to bypass all the things like registration, sitting and waiting, vitals being taken, and seeing a doctor, the verdict was that he also believed I was having an ocular migraine. Since I didn’t have a dark curtain come down in my vision, or splatters of floaters, he didn’t believe it was a retinal detachment. But since the ER didn’t have the right equipment to examine my eyes, I will make an appointment with my ophthalmologist first thing on Monday morning. While I was at the hospital the flashing arc with the mirror-like triangle shards resolved itself, and I felt okay about going home. Sharon dropped me off, and I decided to rest for a couple of hours.

Here was my view as I began this blog post, and the new way my room is arranged:

The picture is distorted since I was using the panoramic feature of my iPhone and my hand wasn’t steady, but it’s good enough. Millie is at the left, worn out by the bath Sara gave her this morning.

I’m so grateful my vision seems to be okay now! I’m grateful for medical insurance. And for my time with Louiser… her hugs and giggles and sweetness. I will try not to think about how lamp-like I will be to her in less than a decade. That will be terrible.

I’m also giving thanks that even though I still have no idea what I’ll be speaking on, I know by the time March 14th rolls around, the Lord will have helped me write the opening I’ll be doing at Community Bible Study. I have been praying, taking notes, trying to discern what the Holy Spirit might want to say to the beautiful women in our class, and so far, I’m in the dark. It seems like this is the pattern every single time I’m ever asked to share, and I don’t get why it works this way. I’m thanking Him in advance for His faithfulness, and trying to learn to rest while feeling so uncertain.

Well, it’s time for bed. I’ll bet your Saturday night was a bit more lively than mine. After my post-ER rest, I made dinner, watched part of the Lawrence Welk Show, took a bath, brushed my teeth, and cleaned my Invisalign trays.

I’m glad you stopped in… God’s peace to you all,