If you are a Madeleine L’Engle fan, you know the word play I’m attempting with the title of this post. If you aren’t familiar with her books, you can click here to see where my brain immediately went when I was trying to think up a title for this post about my tibia.

I’ve known for quite a while that the surgical trimming of my right knee’s meniscus (the C-shaped cushion in the joint) about seven years ago was leading to a bit of arthritis. The orthopedic surgeon warned me about it, but my choices at the time were limited:  1) have the surgery so I could resume walking, or 2) leave the impinged, torn meniscus in there and begin life in a wheelchair, or at the very least, life on crutches.

Gradually my right knee has become stiff and swollen, and in the last year it has become so achy that it wakes me up at night. It used to just hurt after a long day of walking and working; now it hurts all the time, even if I’m sitting or lying down. Going up and down stairs is a slow process. I limp a lot now. 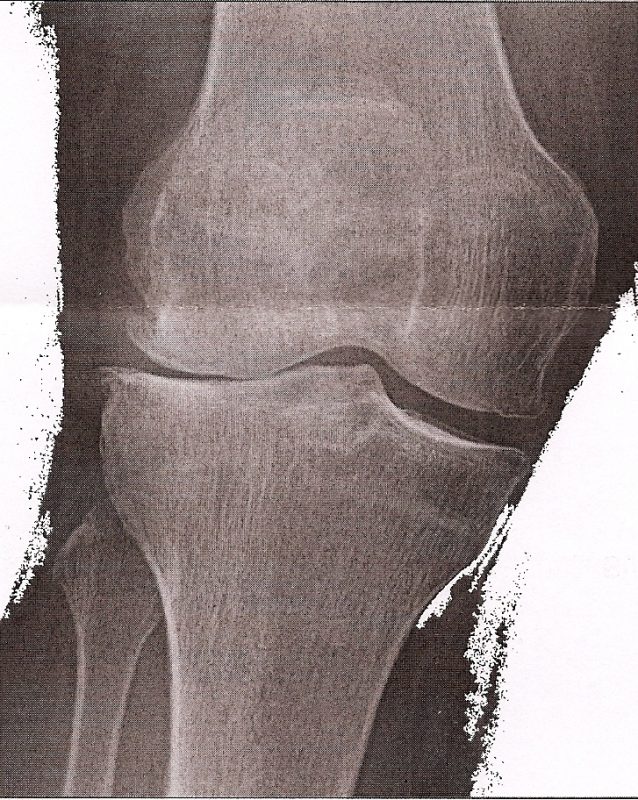 I also noticed a few months ago that my right lower leg had started to tilt outward slightly, away from the knee joint. When I’m lying in bed or on the floor and lift both my legs up straight over me, knees together, the left leg is very straight, and the right lower leg tilts out in a deformed manner, so the ankles don’t meet anymore. Bleh.

So I decided recently to make a doctor’s appointment to see what was going on in there. I knew the x-ray would reveal some arthritic changes, but I had no idea that it would reveal a bone-on-bone situation that my doctor calls “severe,” and would call for eventual knee replacement surgery. Gah. I’m 55, so am too young for a total knee replacement. Apparently it’s not a good idea to do a “total knee” on a person my age, because the fake joint usually lasts only 10-15 years, and a second replacement doesn’t always have good results. So putting off a knee replacement until you’re in your sixties or seventies is what’s often recommended.

This is an x-ray of my right knee. You can see that I have plenty of space between my femur (thigh-bone) and tibia (largest calf-bone) on the inside of my leg, but on the outside of my leg, the bones are in there grinding away. That’s exactly where my nice little meniscus was shaved away. And that’s why my lower leg has begun to deform.

Alas, I have a Swiftly Tilting Tibia.

I will begin physical therapy next week, in hopes that strengthening my leg muscles will help. I can tell that my quadriceps are weak in the right leg because I’ve babied that side due to the pain.

Anyway, if you tuned in here today for something deep to ponder, or for a chuckleworthy anecdote about a grandchild, you’re obviously coming up shorthanded. I’m sorry about that, I really am.

Whether or not surgery will be in my immediate future is still uncertain. Heck, I’m still recovering from my wart-ectomy!