Recently, as Sara and I were looking through some old scrapbooks, I came across the photograph below, and was instantly transported back to September of 1981, when I turned 24 years old.

Two months earlier in late June of 1981, I had left the warm state where I was born and raised, and moved to northeastern Minnesota. I was concerned about the coming winter, since I knew it would be cold and snowy and I had never known cold and snowy.

Two months earlier I had married a man I’d only spent time with once. To see a poem I wrote about all of that, you can click here.

Two months earlier I was not pregnant. In September of 1981, on my 24th birthday, I was.

My first year in Minnesota was glorious and horrible. I was so happy to be married to Michael, but I was so sad to have left all the friends and family I had known. I was hopeful about owning our own home someday since Minnesota’s real estate prices were more affordable than SoCal’s, but a little leery about renting a house in an “interesting” part of town. I was so grateful to be able to stay home with my two little girls instead of working full time, but I wondered how we’d make it if Michael’s work was often seasonal. It was the best of times, it was the worst of times, I guess you (or Dickens) could say.

On my 24th birthday I was in the kitchen making dinner, with music playing on our stereo and my little girls playing in our side yard. It took me a while to register that a horn was honking outside, and I went to the living room to look out of our large front window.

This is what I saw: 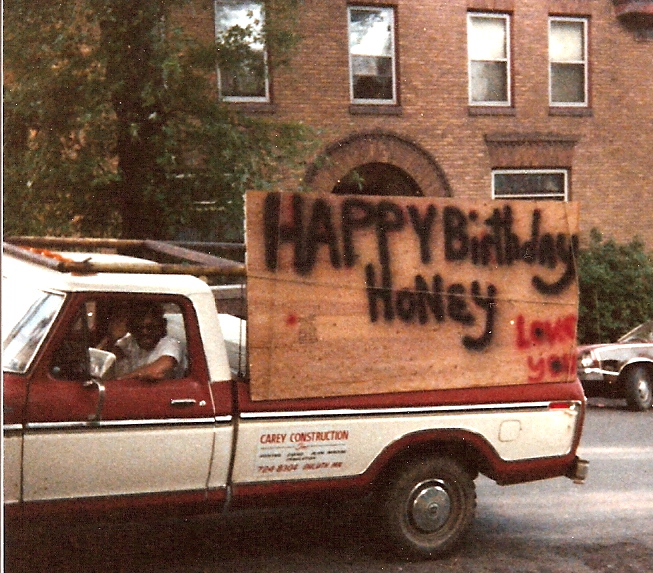 Michael, my husband of two months, in his work truck, just coming home at the end of the day from his carpentry job.

When I saw the spray-painted sign he had made and tied to his ladder rack, and when I envisioned him driving several miles home with that message attached to his truck for all to see, I laughed and smiled from ear to ear. I asked him to stay put while I ran inside to find a camera.

Thirty years have passed. We no longer live in that rented house where our daughter was born. I’m not afraid of Minnesota winters anymore. I am blessed with wonderful family and friends. And of course that truck bit the dust long ago, and it has been several years since Michael has done that kind of work.