Four weeks ago today I was letting a strange man look at my butt. A nurse named Steve had to put an adhesive pad across my lower back (to help prevent skin breakdown) as I prepared for my kidney donation at the Mayo Clinic. It was more traumatic than I expected, brought quiet tears and deep breathing, and a prayer for God’s help and grace. I hope I never have to let a strange man see my backside ever again.

Four weeks ago today my left kidney Justine was surgically removed, carefully placed on ice, flown to Madison, Wisconsin, and then placed into the lower abdomen of a person I don’t know anything about. Except that he or she was very ill, and had waited a long time for a healthy B positive kidney. I learned yesterday that my recipient is “doing great, and kidney function is excellent.” So Justine is doing exactly what we prayed she would — rolling up her sleeves and cleaning up and setting things right in her new human. I truly praise God for how miraculous He made the human body, and that perhaps that person will have more time with their family, more laughter and hope and walks and gazing at the stars and hugging children and reading, and knowing the love of God through Jesus Christ.

Four weeks ago today a generous man in Colorado had his kidney removed too, and it was put on ice, flown to Minneapolis, and picked up by a courier and driven to the Mayo Clinic in Rochester, MN. That kidney was transplanted into my son-in-law Chris, who had been in sudden and severe kidney failure for over a year. Chris is home now, and the kidney was a good match. He is on many anti-rejection drugs that make him feel exhausted and he has a hard time eating as much as he should. The viral times we are in make life uncertain and challenging for Chris and Sharon and their family. Kidney transplant recipients who get COVID-19 don’t fare well, so they have to be so cautious it’s disheartening. It’s hard to know if you can let your children play with a friend, when you can go back to work and what those risks might bring, will you ever travel again, eat at a restaurant again, do anything at all without assessing the risk.

In the last four weeks I’ve taken it easy and allowed my body to dictate my healing. My remaining kidney, Verna, is enlarging and learning to do all the filtering, detoxing, Vitamin D making, blood pressure controlling work herself — something called Compensatory Hypertrophy. I’ve been tired a lot and have taken it slow. My granddaughter Margaret (age 13) stayed several days with me and was such a help. I’m not supposed to lift anything more than 10 pounds until after Labor Day, so she carried laundry for me, emptied the dishwasher, made molasses cookies, BLT pasta salad, and helped me organize three horrible areas.

Margaret took everything out of my kitchen baking carousel, I decided what needed to be tossed out. She cleaned the shelves which had flour, sugar, bits of nuts and smears of molasses on them. Then she put everything back as I directed, and I have a baking cabinet that is so easy to deal with now. A few days later we tackled the toy closet in my hallway, which looked like someone had bought up seventeen old games and sixty-eight toys at a rummage sale, brought them to my house and thrown them into my closet. While I sat in a chair, Margaret and I sorted big Legos from small Legos, Magformers, Monopoly pieces, dolls, puppets, dice and games. Many things went to the Goodwill bags. My toy closet is camera-worthy now, and the clutter hum at the back of my mind went down several decibels. Margaret said, “That was a lot easier and went a lot faster than I thought it would.”

Then a couple weeks later Margaret came back and helped me organize the linen closet in the hallway, which doesn’t hold linens, so I don’t know why I call it the linen closet. It holds lightbulbs, diapers, Kleenex, old folded quilts, a first aid kit with flash lights and other miscellany. Three more Goodwill bags were filled, and now that closet is organized and has space on the shelves. It feels so good to have these three spaces done, and it really makes a difference when you have a partner working with you. I need to do my office closet but I don’t want to do it by myself. If someone (Margaret?) would help me it would seem doable. I guess I need some kind of Organizing Aide by my side at all times now that I’m old and have a Compensatory Hypertropic Kidney.

I have one complaint after these four weeks, and I’m praying things ease as time goes by. My surgical sites have healed nicely. I had three laparoscopic sites and one large incision under my navel. No swelling or redness ever appeared, no tenderness remains. But inside something is hurting. On the side where Justine used to reside, there are two spots that feel like something sharp or abrasive is constantly rubbing. It feels like deep inside as I move, a rug burn type of pain is always being irritated. And on the other side where Verna still is, only much lower and toward the front of my body, is the same kind of pain. Of course I Googled this, but nothing definitive came from my few searches. I finally emailed my transplant team at Mayo and was called back the same day by my Transplant Coordinator Kay. I asked the question I didn’t really want an answer to: “There aren’t staples inside me, are there?” And you already know the answer I’m guessing — yes, yes there are. The blood supply to the removed kidney had to be stapled. The ureter that used to go to the bladder had to be stapled. And one of my lymph nodes was stapled so it wouldn’t leak. I’m not sure why stitches aren’t used, or maybe they are along with the staples. But most likely, those staples are jabbing my internal tissue all the livelong day, and there’s not a lot that can be done. I’m waiting to hear back from the surgeon, but I’m hoping calluses will develop instead of constant wounds that get worse and worse inside. It’s not unbearable, but it’s there. And I guess it’s unusual for a donor to feel them.

For the last four weeks we have had the most humid weather I can ever remember since moving to The Air Conditioned City on the shores of cold Lake Superior in 1981. My central air has been on non-stop for over a month, night and day. So that has contributed to my slow month as well. Who wants to go for a walk when the dew point is 70 and the temperature is 92? Not this woman.

For the last four weeks, Lloyd and I and Margaret have worked on a lovely jigsaw puzzle. My friend Tauni in San Diego sent it to me, and it is very Minnesota. A cabin, a loon, a canoe, a cardinal, a plaid blanket…. here’s a picture of it finished. 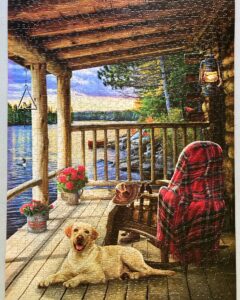 The last few days however, autumn has begun to show herself. The light streaming in the windows is coming in at a lower angle and seems more golden. The dew point has been in the high 40s, the temps in the high 60s. The windows are finally open and a wonderful breeze has billowed the curtains, and I’ve turned on my little bedroom fireplace again in the morning dark. My hydrangeas are blooming in glory and beginning to blush, as if someone paid them a lavish compliment. There are flannel sheets on the bed and I’m thinking about making a pot of soup soon. 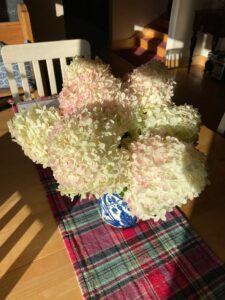 I’m looking forward to getting back on my e-bike soon, too. Community Bible Study begins in a couple of weeks, and all over the world the classes will be held virtually. I will be helping one day a week with some of my grandchildren as they begin home schooling. I’ll be returning to Mayo in early November for my three-month checkup. This may be the first year in my life that I won’t be meeting with my whole family for Thanksgiving and Christmas… we will cross that bridge when we get closer.

I woke at 3:30 a.m. this morning and couldn’t get back to sleep, something that happens to me more often than I would like. I don’t want to get up at that time, but I don’t want to lay in bed either. So this morning I just took a cue from my beloved Michael, and I quietly praised the Lord in the dark. I thanked Him for how trustworthy He is, how beautifully and carefully He has made His creation. I thanked Him for His mercy to me, how unspeakably patient He has been with me for almost sixty-three years. I thanked Him for the desire to praise Him, for the understanding that praise and gratitude really does something, really matters, even though I might not be able to see and grasp all the whys. The name and the person of Jesus sustains and thrills me in these times. He is a firm foundation and I ask Him to help me build my house on Him each and every day. I ask Him to help my children and grandchildren build on that Rock too. No shifting sand for a foundation, Lord.

Thank you for stopping by, and your prayers would mean so much,