Every summer for the past 13 years I have hosted a women’s Bible Study in my home. I take that back…. there was one summer I just couldn’t get it together for 12 Tuesday meetings. It was when Michael’s Parkinson’s Disease really started to dominate our lives, and I was entering the stage of being perpetually overwhelmed. But somehow, by the grace of God, a group of dear friends have been meeting on Tuesday summer mornings now for a long time. It has become the highlight of my summers.

If you stop by here now and then you know that this summer we’re doing something different. Instead of the video-driven Beth Moore or Priscilla Shirer studies we’ve most often done, we are studying the book The Hiding Place by Corrie ten Boom. And rather than make our Tuesday meetings a book club where we just discuss the chapters we’ve read the previous week, I wanted our group of ten women to have some homework to do. 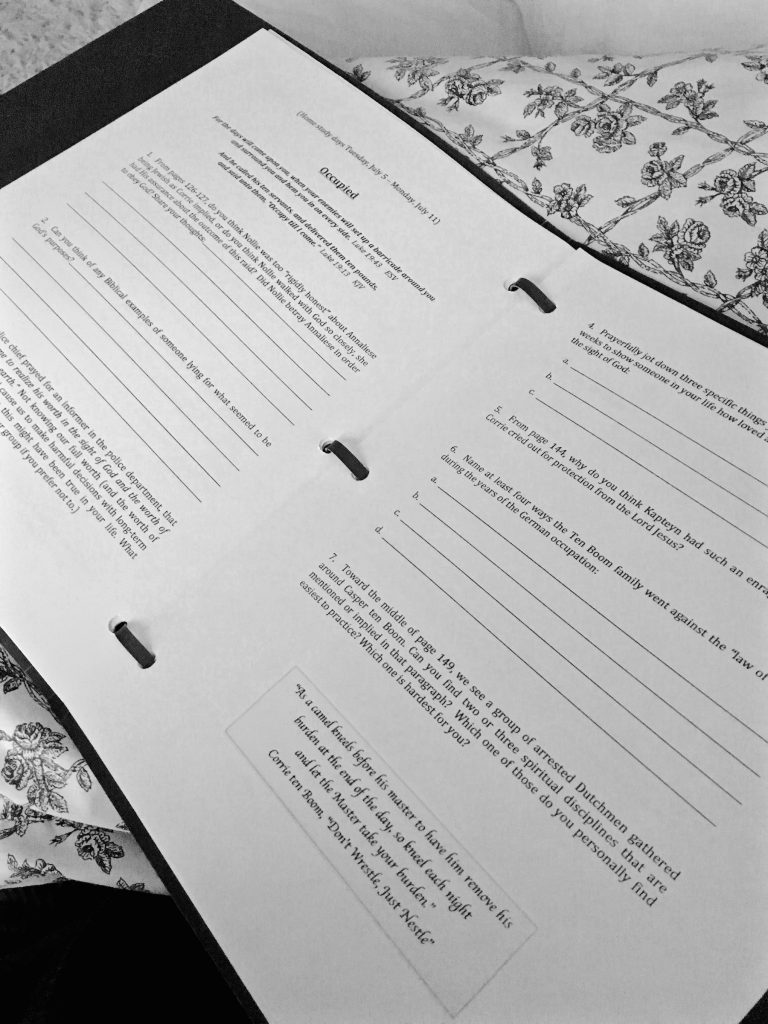 So I put together a pseudo-workbook, and we have some questions to discuss when we meet. At the end of each meeting, we watch a 20 minute segment of the film by the same name. We have different prayer partners each week, and we lift our needs up to the Lord and ask Him to invade and change our lives for His purposes and our joy.

So far, even though what we’re doing is quite different, I like it. The Hiding Place speaks of several hiding places, the most renowned being the tiny spot behind a bedroom wall where Jews were hidden in the Ten Boom house in Haarlem, Holland during World War 2. Another hiding place often inferred is the place we are hidden in Christ when we give our lives to Him.

I think of my living room as another hiding place, where ten of us carve out two hours a week to come and seek the Lord and hope we’ll encounter Him in personal, lasting ways. So while my living room isn’t the Hiding Place, it’s a hiding place to me. I would guess that many of you have “hiding places” in your home and lives where you can go to meet with the Lord in prayer and to read His Word.

I bought a new iPhone recently after I’d been trying for a while to continue using my shattered old one, and I noticed that its camera has a panoramic feature. I finally tried it out, standing in each of the four corners of my living room. I was surprised at how well the pictures turned out, considering I just swiped the camera in a slow circle without paying much attention to how steady my hands were.

The wall color varies a little from shot to shot, depending on where the sunlight was coming in, I guess. I would call the paint color robin’s egg blue.

And on Tuesdays I bring in some dining room chairs wherever they fit, so we can sit in a circle for our time together.

Just a little more than a stone’s throw from that front window behind the two chairs, is beautiful and vast Lake Superior. I don’t take for granted that I get to look out on that blue treasure every single day.

And a lovely quilt has a spot of honor in the room, folded on the ottoman you see below. In the evenings, I use the quilt that my friend Helen made and sent to me from Switzerland, but I don’t put it on the back of the couch anymore when it’s not in use, because Millie liked it too much and I don’t want little Schnauzer paws to break the threads.

In the photo below, you can see into our dining room and beyond that, the kitchen. The paned doors right behind the blue floral chair lead to the front door of the house.

This is just one of countless hiding places the Lord has provided for His people. Most days I just think my smallish living room is a pleasant and comfortable place. On Tuesday mornings before Deb, Kristi, Kay, Dawn, Connie, Laurel, Fiona, Sharla and Sue arrive, a sense of awe and anticipation surrounds me, and I get down on my knees and ask God to come and be with us in whatever special ways we each so desperately need.

Have you read The Hiding Place yet?

And where is one of your “hiding places?”