A day of rest

Yesterday was Sunday, and it’s always good if Sundays can be a day of rest. As a matter of fact, something about observing a Sabbath rest really struck Michael and I as we were reading the Bible together recently. I go to Community Bible Study and this year we’re studying the book of Luke. Thirty in-depth weeks in one book of the Bible – it’s wonderful, amazing, enlightening, exciting, stabilizing, astonishing, sobering – too bad I can’t think of any adjectives about what simple, honest Bible study can do for a person.

Anyway, Luke writes that the Pharisees were always trying to find reasons to trip Jesus up, and toward the end of His life they were constantly plotting ways they could kill Him. And these were the respected religious leaders of the day. They hated how Jesus did so many of His miracles on the Sabbath. Then it got so they just plain hated Jesus. They thought He was breaking God’s rules and that they should do something to stop Him. They didn’t know that He was God in the flesh and made the rules Himself, and even formed those Pharisees in their mother’s wombs and gave them the ability to reason and speak to begin with. 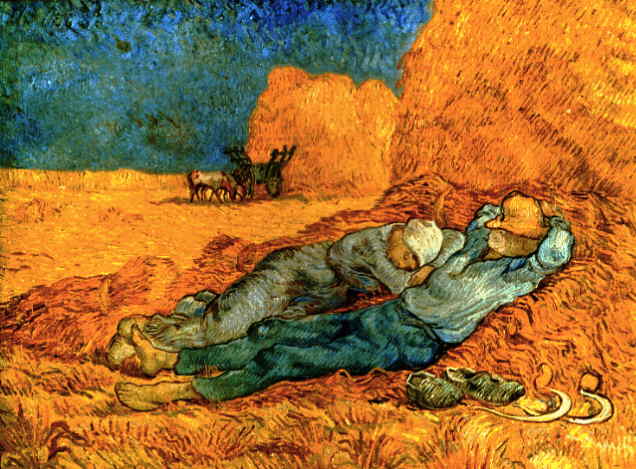 So in our CBS commentary recently we delved in to what it means to observe a Sabbath day of rest. We’ve been in Luke 13 and 14, and Jesus keeps doing all these wonderful things on the Sabbath and it irritates the religious leaders like crazy. Another scripture referenced about the Sabbath was Isaiah 58:13 and 14:

14 then you will find your joy in the LORD,
and I will cause you to ride on the heights of the land
and to feast on the inheritance of your father Jacob.”
The mouth of the LORD has spoken.

These were the two verses that stood out to Michael and me as we sat and read and pondered together. I’d read them previously, but they didn’t seem to shimmer with life then as they did recently. I have always known that it’s important to God that we set a day apart to rest and to honor Him, but I can’t say that other than going to church on Sundays, the fourth commandment has been a big part of my life. Sundays have been a day of rest, yes, but they have also often looked like any other day. Unfortunately.

There’s a promise from God in those two verses that I would like to lay hold of. Then you will find your joy in the Lord…..I could use a little joy in my life, and I truly do want to honor the God I love. In other passages of the Bible we’re told that God instituted the Sabbath because He knows we need to rest and be refreshed. I’m so thankful He knows how tired and weak we are, and that we need refreshment.

So Michael and I are in the process of working this out in our lives. What will honoring the Sabbath mean for us? We’re pretty sure it won’t just mean going to church on Sundays and refraining from going shopping. It won’t merely mean taking a nap on Sunday afternoons and not doing our regular work. We are not interested in keeping the Sabbath legalistically and becoming just like the Pharisees were – scrupulously observing the day and forgetting the Creator of the day. We know that if God has laid something on our hearts and our intent is to listen and obey, He will give us help and insight as we look to Him.

But back to yesterday. We did not go to church yesterday because we had to drive downtown to Sharon’s new yarn-dying studio where much is going on to prepare for the arrival of Three Irish Girls in our neck of the woods. Plumbing is being installed so washing machines can go in, electrical stuff is going in and up so dyeing stations can be well-lit and functional, and stoves can be hooked up, bright paint colors are being rolled on to the twelve foot-high walls, and old flooring is being torn up, as the space is prepared for its new purpose. Chris and Sharon and their three children will move from Maryland to Minnesota in less than a week.

For various reasons, we had to be at the studio briefly to oversee some things that had to get done yesterday, which was a deadline of sorts. First we took Sara to church because her car is in need of repair and will be worked on this week. Then after a trip to the studio, we had to do some driving for our business and Sunday is truly the only day it can be done. Then we had to return home for a waiting period, then we picked up Sara after church was done. Then we had to go back downtown to the studio, then back home again. Then on another short errand for our business (again, Sunday is the only day this can happen), then we came home and I worked on the tacos and fixings I’d planned for dinner, then four of my grandchildren came over for a couple of hours (which is always a blessing). Then we had dinner, then the phone started ringing and nothing ever really let up until it was almost bedtime. I had even made an appointment for a phone chat with a dear friend in California later in the afternoon, and it never happened because the whole day was a crazy one. It was not particularly a day of rest. I fell into bed at 8:30 and was awakened by another phone call at 9:00.

Does it sound like I’m complaining? If it does, I am not at all. Everything we did yesterday had to be done. There weren’t other alternatives, and as we tootled around all day I was thankful for everything the day meant: sunshine, melting snow and the hint of spring in the air, vehicles to drive and to loan to those who need transportation, a thriving business the whole family is throwing themselves into because it means we’ll all be in the same state now, food on the table and a guessing game at dinner that had everyone laughing, the happy playing of healthy grandchildren, and the legs and hands and eyes and strength it takes to do all of the above and more.

As far as it being a day of physical rest, it certainly wasn’t. I have a lot to learn (and at such a late stage in my life) about keeping the Sabbath and what this means for me. But it was a good day, and I think God is speaking to me about being able to live from a state of rest in my heart and soul, whether or not my body is able to be at rest.

And here’s a passage from Luke 13 that we studied at CBS recently:

10On a Sabbath Jesus was teaching in one of the synagogues, 11and a woman was there who had been crippled by a spirit for eighteen years. She was bent over and could not straighten up at all. 12When Jesus saw her, he called her forward and said to her, “Woman, you are set free from your infirmity.” 13Then he put his hands on her, and immediately she straightened up and praised God.

15The Lord answered him, “You hypocrites! Doesn’t each of you on the Sabbath untie his ox or donkey from the stall and lead it out to give it water? 16Then should not this woman, a daughter of Abraham, whom Satan has kept bound for eighteen long years, be set free on the Sabbath day from what bound her?”

17When he said this, all his opponents were humiliated, but the people were delighted with all the wonderful things he was doing.

I tried to imagine what it would have been like to be bent over for eighteen years. Or even eighteen hours. What joy and freedom this woman must have experienced after such a horrible existence for so long. In this passage I see so much, but three things rise to the surface. 1. We are sometimes allowed to experience terrible things in order to finally know and appreciate the One who can deliver us from them.  2. Jesus Christ has complete and calm control over the dark, demonic realm. Can you name anyone else like that? 3. After Jesus freed her, this woman “straightened up and praised God.”

I love that – I want to straighten up and praise God too.