Five-year old Vivienne spent two nights at Grandpa and Grandma’s house recently. At least four times she approached me confidentially, leaned in to whisper something that seemed of utmost secrecy and asked out of the side of her mouth in her Viviennesque way, “Can I draw?”

“Of course you can!” I would answer, and she would help herself to typing paper and crayons or pencils, and set to work at the kitchen table.

Here’s one of Vivie’s masterpieces that I had to share with you:

This is her sketch of our older Schnauzer Edith. In case this doesn’t strike you as zee mossterpiece eet ees, here’s a random photo of a Schnauzer I found online so you can see how well Vivie did. 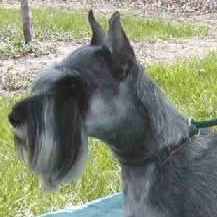 I think she captured the quintessential Schnauzer traits quite well for a five-year old who did the drawing in less than two minutes.

I have several posts of monumental importance in the works, but I’ve been a little occupied these past few weeks as Michael heals from his shoulder replacement surgery. He’s in a shoulder immobilizer and isn’t supposed to use his right hand or even move his arm for six weeks.

For now, a photo of a strange dog and a pencil drawing by Vivie, our little arteest, will have to do.

Have a wonderful weekend!