Yesterday was a low-key day, the kind I like best. No appointments, no place or person desperately needing our presence. I don’t think Michael enjoys these kinds of days as much as I do, and I feel badly for him. He has always been a high-energy man, accustomed to building and remodeling and then planning out his next building and remodeling project. That’s not the way it is anymore, and if you’ve been around my blog for a while you know why. And since he doesn’t drive now, he’s dependent on me to take him places, which I am happy to do 99% of the time.

I cleaned the kitchen yesterday morning and straightened up the house, and then sat down to go through the workbook of the James Bible study I did with a group of dear friends this summer. We all agreed to re-read what we’d completed, to seal in our memories and hearts what we learned. After a while I could tell Michael was slightly restless, and by 1:00 I asked if he wanted to take a drive up the north shore of Lake Superior. He did.

We drove to Two Harbors and had an exceedingly high-fat and delicious lunch at Culver’s. They don’t call them ButterBurgers for no reason at all. A big lunch like that is enough to last me until past dinner time, and then ideally I would eat a piece of fruit before going to bed. But I have to make sure good food is available three times a day, seven days a week, so as soon as we got home I started on something to put in the oven.

As we drove home along the beautiful shore of Lake Superior, we listened to some music that always makes me yearn and causes my eyes to fill with tears I can’t explain. This song, in particular, seems to plunge a knife in my heart each time I hear it. You can click on the link and it should open in a different window, start the video (which is just so you can listen to the music) and then you can read the rest of this post while having a knife plunged through your heart too!

Michael likes it when I sit down at night to watch something on television with him. Netflix has been our answer to the dilemma of “husband likes TV, wife not so much,” and we have watched some fantastic series (mostly British) over the last couple of years. “Monarch of the Glen,” “Bleak House,” “Doc Martin,” “Wives and Daughters,” “Garrow’s Law,” “Foyle’s War,” “Cranford,” and many others have come to our house in little red envelopes.

The night before last we watched a movie I chose, not knowing anything about it except that it was labeled a thriller and was directed by M. Night Shyamalan. I like a good thriller once in a while. They can be a little murderous, a little monsterish, just not too much. I don’t want buckets-of-blood-murderous or demon-like monsters. I just want a little blood and/or a killable monster.

The movie we watched was “The Village.” Have you seen it? It had a couple of actors in it that interested me — I like Bryce Dallas Howard and Joaquin Phoenix — but the longer the movie went on, the more I wanted to start playing Words With Friends on my iPad. (Do you play Words With Friends? Send me your user name and we can set up a game so you can whomp me.)

Basically, the story was about a group of people living in a (supposedly) 19th century village, completely isolated from the rest of the world. The people were very colonial seeming with colonial houses and furnishings, and they were governed by a group of elders. They led happy and quiet lives, except for when the beasts in the woods would start acting up. The beasts were called “those we don’t speak of,” and were attracted by the color red, so red was completely forbidden, and all red flowers had to be plucked up and buried. The beasts were apparently repelled by the color yellow. All around the village were hung lanterns and yellow flags to deter the beasts from coming out of the woods and making horrible sounds and causing all the people to flee for their cellars while the beasts pounded on their doors in a deafening manner and left swathes of red paint across their houses. When the beasts were really upset they would skin small pigs and leave them in various places all over the village, to remind the poor people that they were still being observed, and they needed to watch their Ps and Qs.

It would take too long to go into all the details of course, but at the end of the movie, one of the elders sends his blind daughter through the woods toward “the towns” to seek medicines for a dying young man who has been attacked by the beast (or so some of them think). He believes sending her would be the best choice instead of going for the antibiotics himself. Before she heads out, the elder has to confide in his blind daughter that the beasts are really a farce, thought up by the well-meaning elders to keep the people in the village living innocent, quiet lives. After she gets over her shock, the blind young woman is able to feel with her hands the hidden beast costume which was worn by one of the elders when a Beast Attack was warranted. I’m sure she was stunned to learn that her father and all the other elders had deceived them all for so long, but she was in a hurry to wander blindly through the woods by herself so she could get to “the towns” beyond and get some meds, so she didn’t have time to process all this fully right then.

Here comes a twist in the movie that’s not important enough for me to go into depth on, but while the elder’s blind daughter was feeling her way through the cold and terrifying woods alone, falling into muddy pits and being scraped by branches left and right, a young man from the village who had some mental problems had found the beast costume, put it on, and followed the blind girl.

Up until this point all we had seen of the beast was a skeletal hand that reached ominously from the red sleeve of a robe now and then, and even then it was just a glimpse. These woods scenes were dark and flashed quickly with terrifying loud and sudden sound effects to make the viewer startle and scream.

And finally we got a view of what the beast costume really looked like. 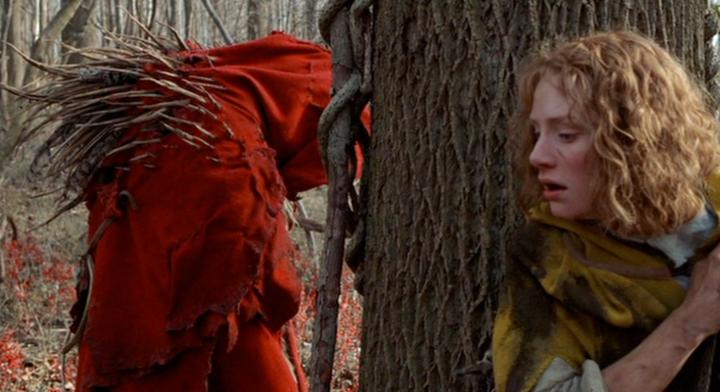 I’m not sure how to do it justice, but to me it looks like a giant porcupine who put on his red bathrobe too carelessly.

At the end of the movie we learn that the village elders were modern men with their wives, who had moved to a modern day wildlife preserve after each of them had suffered trauma and tragedy in real 21st century living. They had decided to go back to a simpler, more peaceful way of life, and thought an enormous porcupine in a red hooded cape would help them achieve their ideals.

If I had known that donning a getup like the one pictured above would have assisted me in raising my children, in motivating them to be scrupulously obedient and to stay within all the parameters I had set for them, and would keep them out of the scary world, I think I might have worn it myself.

Anyway, if you have “The Village” in your Netflix queue, you might want to hit the button at the right of your queue that says, “remove.”  🙂

Tonight Michael and I might watch something else together. We have this and this sitting near the TV in their little red envelopes. I’m thinking about making Chicken Piccata with a fresh romaine and red onion salad for dinner.

Have you ever seen a movie you intensely disliked? Or one that was so silly and unbelievable you just rolled your eyes and wanted to play Words With Friends instead?

Which movie/s fell into this category for you?