When I was twenty-three years old (many, many moon ago), I moved from The Golden State to The North Star State. From the ever-sunny, densely populated, smoggy, southern part of California, to the mostly wintry, wide open, lake-strewn northern part of Minnesota. There are almost twice as many people in Los Angeles County, where I was born and raised, as there are in the entire state of Minnesota, where I’ve been lovingly tended and have now grown old.

In California we had fresh strawberry stands on the sides of the roads and my mom bought “flats” of them often. In Northern Minnesota the growing season is so short we all believe berries are like ruby-colored treasure, and we get excited if we have any kind of berry pie or shortcake. In California if we ever ate anything just thrown together and baked (basically almost never), it was called a casserole; here in Minnesota we call it hotdish. Not a hotdish. Just hotdish.

When I moved here, I wanted enchiladas in no time, but my native Minnesotan husband hadn’t heard of such things. He suggested we drive through Taco John’s, which was not the authentic Mexican food I was accustomed to growing up so close to the border. Early in our marriage I invited my in-laws over for homemade tacos, and neither had ever eaten a corn tortilla, much less one perfectly folded and fried in hot oil to serve as the heavenly and moan-worthy vessel for meat, salsa, sour cream, onions, lettuce and cheese.

“How does your house stay warm?” Mom wondered, slightly alarmed. “Are you keeping blankets wrapped around you at all times?” Our furnace in SoCal was the size of a Christmas tree box and it fit in our hall closet; no one ever gave it a second thought. I learned quickly that furnaces in NoMin are metal octopus-like behemoths that lurk and roar and blast in dark basements, and actually keep houses quite warm when it’s 34 degrees below zero outside. Or colder. We didn’t actually have to wear blankets in the house. But we did have to dress “in layers.” Instead of my usual cut-off Levis, halter tops and sandals, my husband Michael instructed me in wise and warm dressing for the Northwoods. Turtlenecks, wool socks, lined Sorel boots (and later Steger moosehide Mukluks which I still wear — see here), Thinsulate mittens (never gloves!), scarves, down-filled jackets or parkas, but I drew the line at long underwear. Michael wore them since he worked outside a lot, but I never did.

That first winter tested me. I had married a man I’d only met once, left behind family, friends and balmy weather and moved to what I still call American Siberia. It took me a while to make friends and learn to live in a part of the country that had snow on the ground from October until May, but it only took me two weeks to get pregnant with my third child. I made my own enchiladas and got a good recipe for a hamburger and wild rice hotdish which tasted pretty good. 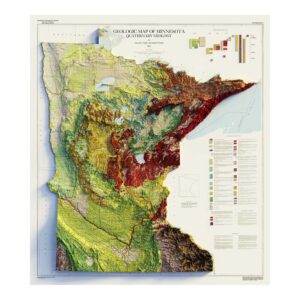 After a couple of years, the rhythms of Minnesota, her seasons and people, became my rhythms, seasons and people. I loved the changing colors of the leaves in the fall and made pumpkin bars and harvest soup. I stopped feeling that mild dread when winter blew in, and learned to love the comforting fires in our hearth, the piles of books from our little neighborhood library, and the smell of my homemade whole wheat bulgur rolls wafting through the house almost weekly.

I never took up gardening like so many Minnesotans do, but spring always felt like we were emerging from a dark cave, and I learned Michael wasn’t exaggerating when he assured me my blood would “thicken” as time passed. My thick blood became apparent to me as I walked down the streets of downtown Duluth in sandals and a sleeveless denim shift one early spring morning before I noticed the temperature on the marquee of the bank said 26 degrees. I drove home immediately and sat and pondered what had just happened. No wonder people passing me on the sidewalk gave me second looks.

I grew up in Covina, California, and we used to have to drive two hours to the mountains to see snow, to spend a day sliding down a slope on red metal disks with white canvas handles. Seeing mountains is probably the only thing I really miss, living here. After a Southern California rain which cleared the smoggy air, Mt. San Antonio, or Mt. Baldy as everyone really knows it, was always visible from wherever we were. When it was covered with fresh snow, I always took time to stare at its beauty, even as a child. Here’s what a view of Mt. Baldy looks like from Los Angeles.

Now that I’m close to retirement age, I think about ways to get out of the cold in the winter time. Lloyd and I have talked about visiting different places in January, maybe northern Arizona, maybe North Carolina. I don’t ever want to move away from Northern Minnesota, because it’s too beautiful. Life is too lovely here to move away completely. But getting away for a couple of weeks in the darkest, coldest month is a strategy many Minnesotans use that enables them to stay in the state they love.

Last Sunday after our Easter time was over, two precious granddaughters stayed to spend the night with me. Louisa got a tubby in Grandma’s deep, fancy tub. They got in their jammies, had snacks, did cartwheels, giggled together, drew pictures of dogs, and wanted to sleep next to each other on pallets made of blankets in front of the bedroom fireplace. I read two delightful books to them, and Audrey in particular listened so attentively to each word, eyes never straying from the illustrations. Here’s one book, and here’s the other.

After they finally settled down and fell asleep, I set my phone alarm and tried to snooze myself, but struggled to sleep well. Maybe it’s because I knew we’d have to be up early to get ready for school.

I woke them up earlier than they are used to, in steps. First I turned up the heat, and clicked on the fireplace, so a cheerful little glow would be the first thing they’d see. Then I opened the curtains of one window to let in a bit of the dawn. Then I put some soft music on from my phone. I took their toothbrushes out and set them on the bathroom counter with toothpaste. I said “Good morning girls,” but no one stirred. I bent down to rub their backs under the thick down comforter, and finally saw signs of life. I asked them to get dressed and told them what time breakfast would be ready, and went to the kitchen to get things started. I turned on the gas fireplace in the dining room so they’d have warmth at their backs as they ate, while the house was warming up. I made scrambled eggs (sloooowwww is the way to go on these), toast, and chicken and sage sausages, and the girls were ready and calmly at the table in time. They both thanked me for the food, and went off to brush their teeth and hair before grabbing their things and heading down to the basement and to the car (christened Hubble) in the attached garage.

We drove Louisa to school first, and as she got out of the car I reminded her how much I love her, asked her to do her best in school, and told her that even though she can’t see Jesus with her eyes yet, He is right there with her, all throughout her day. On the way to Audrey’s house (she goes to Catholic school so the day after Easter was a holiday for her), we drove up on Hawk’s Ridge, overlooking Lake Superior in all its glory as the morning sun assured me that, yes, I could trust God again on this day. 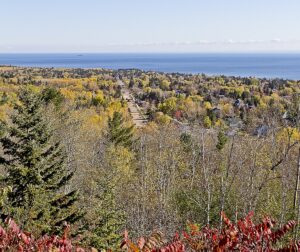 The photo was almost our exact view, except it was taken in the fall and later in the day.

I told Audrey how when I met Grandpa Michael for the first time in 1981, I flew from Los Angeles to Minneapolis, and he drove me north to meet his family for a few days. His mom Bernie came out of the house as we drove up the driveway and parked, and held out her hands toward me and said reverently and in a hushed voice, “You look just like the Blessed Virgin!” That memory is funny and dear to me, now that Michael’s parents are gone too soon from a terrible car accident.

The second day I was in Duluth, Michael drove me up on Hawk’s Ridge to see Lake Superior and I gasped, asking, “What is that?!” I’d had no idea it would be so vast, so sweeping and spectacular. It looked like an ocean. Now, forty years later with Michael gone on ahead of us to heaven, I know this Lake is our treasure. We drink the exquisitely delicious water every day, we give thanks for its cooling power in the middle of summer, and we watch the 1000-foot ore boats coming and going all during the shipping season. Because of God’s provision and kindness, I get to see this Great Lake from the windows of my home every day.

We watched the sun rise a little higher and then I drove Audrey home, called her Beauty as I always do, and watched her run in her back door to join her five siblings and parents.

When I return to Southern California now, it seems like a foreign country to me. So many trees are gone. People have removed the green grass and paved their front yards to park numerous cars. Windows on normal residential houses have iron bars on them. Schools are gated and locked. And the traffic….

If you’ve visited my blog much, you know I love to look back at my formative years in Southern California. It was a splendid place to grow up, surrounded by orange tree groves that made the gentle breezes smell like paradise, bordered by the mighty Pacific Ocean on one side and the San Gabriel Mountains on the other, where nearly constant sunshine gave me freedom and opportunities to run and play and swim.

But now I am a Minnesotan. My people are Minnesotans. I’ve embraced Minnesota culture with everything in me. I love how people here say, “Oh fer cute!” and “Do you want to go with?” and “Nice day, ay?” and “Uff-da!” There are few swimming pools here, no roadside strawberry stands that I’ve ever seen, and my furnace would never fit into a hall closet. I no longer have to drive two hours to see the snow, or 45 minutes to see a huge body of water.

Here in the North I’m never far from a stealthy wolf, a massive moose with nostrils you could fit your fist into, an undulating fisher pursuing a mouse, a gliding muskrat, or a flashy cardinal perching low on a lilac bush. I like hotdish, walleye, keep my Kahtoola nanospikes near my shoes six months of the year, store a blanket and a first aid kit in the back of my Outback, and am one of the few people in the state who doesn’t, alas, own a cabin.

I love to travel, and hope to do more of that before I die. There are so many places I’d love to experience. Switzerland. Israel. England and Scotland again. Ireland. Norway.

But I feel so very blessed to live here in this grand northern state full of water and wildlife and trees.