Awhile back Michael had an all-day appointment at The Struthers Parkinson’s Center in the Minneapolis area. It had been a few years since he’d gone through the many hour-long appointments they schedule at an all-day assessment. Beginning at 9:00 a.m. and lasting until 3:30 p.m., he had appointments with a Speech Therapist, an Occupational Therapist, a Physical Therapist, a Nurse Practitioner, a Social Worker, and at the end of the day, his neurologist. They all specialize in Parkinson’s, so each professional is always compassionate and a fount of helpful information. The sessions can be intense because they fit all they can into the hour slots, but each time we’ve gone (during different stages of Michael’s PD journey), we’ve come back with something helpful to try.

Since Michael is a good-natured man, he’s willing to go to something like this, which is usually quite tiring and often not very heartening for him. He would rather watch the Minnesota Twins play baseball on TV, or pick up Schnauzer poop in the yard than concentrate on all the things Parkinson’s is doing to him.

So when we drive the few hours to Minneapolis for these appointments, we try to stay in a hotel, go out for a nice meal, see a sight or two. It would be too grueling to get up at 4:00 a.m., drive down, go through the many assessment appointments, and drive home in the dark.

This last trip I was feeling like we should stay in a place outside of our regular hotel box. I surfed around online and found a place in downtown Minneapolis called Le Meridien. It’s an artsy, hip, young and edgy sort of place — the very things we are not. That’s just the reason I booked a room (that and the incredible middle-of-the-week deal they had going), and told Michael we’d be trying something different with this trip.

We had also received two recent recommendations for a place we’d never tried — Punch Pizza. Punch Pizza happened to be down the street from our hotel, so voila! our evening was planned.

When we reached our hotel I scolded myself for not having read the fine print well enough — it cost $28 to park. Ahem. Oh well, we rolled with it and handed Jason our keys to the Highlander and pretended we did not look like Jed Clampett and Granny rolling their suitcase into the lobby. (I used to say Jethro and Elly May when I’d employ this witticism, but clearly Michael does not look like Jethro and not even a person with double cataracts would mistake me for Elly May). 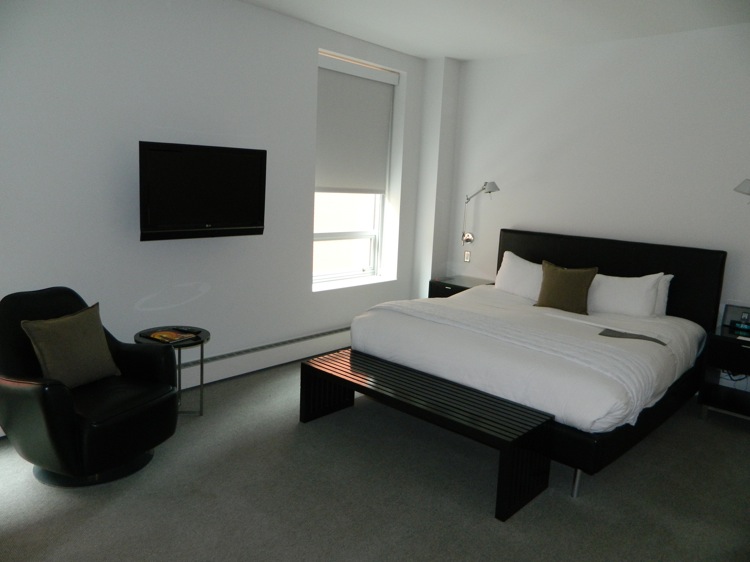 I’m not sure how to describe our room. What would you say? Spartan? Minimalist? Modern? Plain? 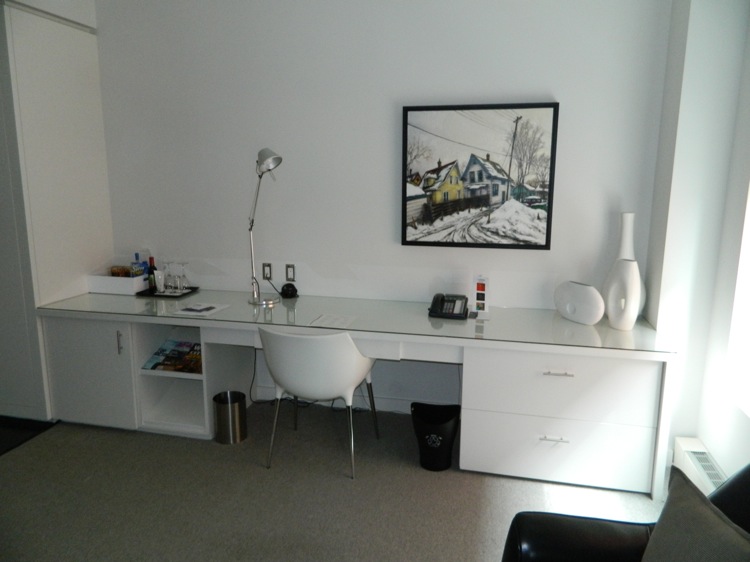 The bed was divinely comfortable, which is all that really matters when you are over 55, which I almost am. In fact, I will be over 55 in 20 days, now that I think about it. Other things matter regarding hotel rooms too, like the absence of cockroaches, quietude, and a non-smoking room.

There was a huge television on a swiveling wall mount that was a bonus for a man who wanted to watch the Minnesota Twins that afternoon, who happened to be playing at the new Target Field, which was about one mile from where we lounged in the divinely comfortable bed. 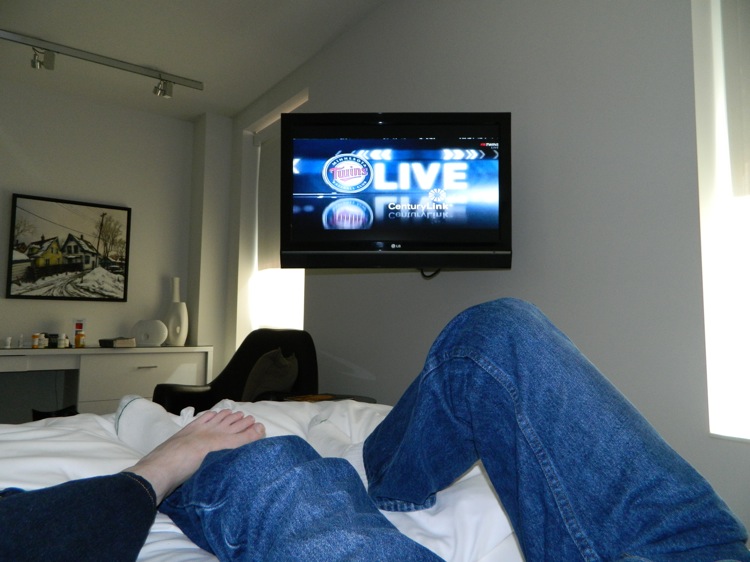 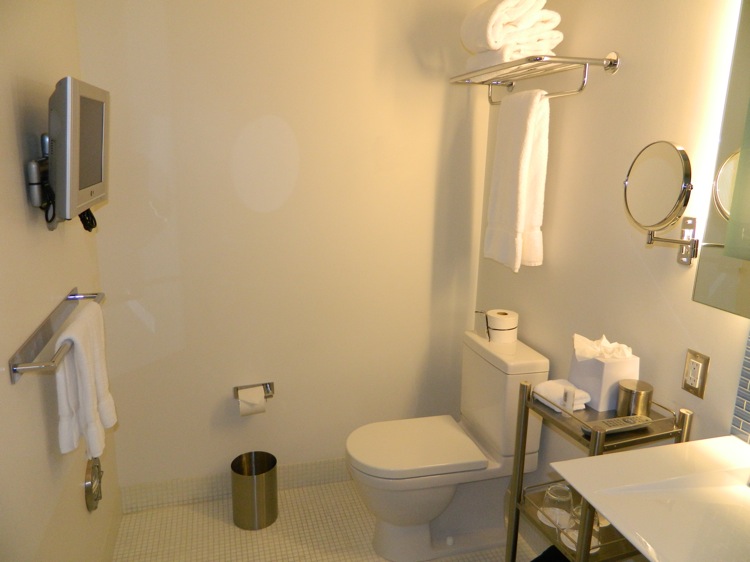 I thought the sink was photoworthy. 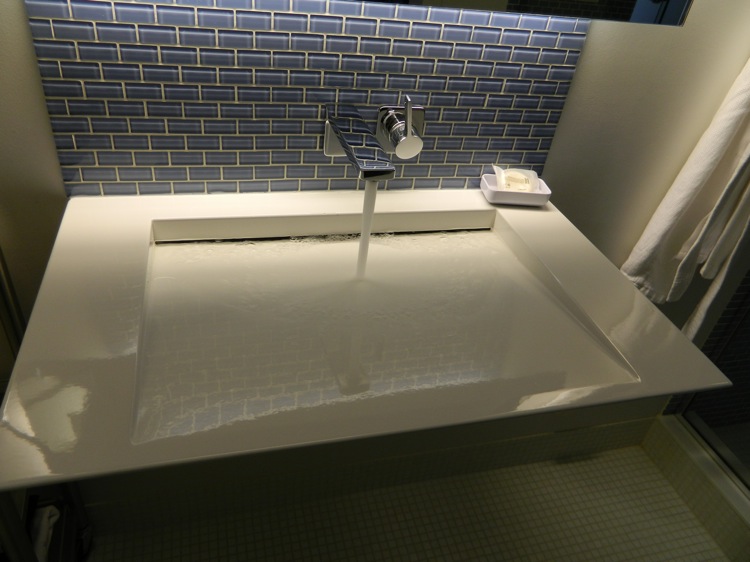 And the shower too. 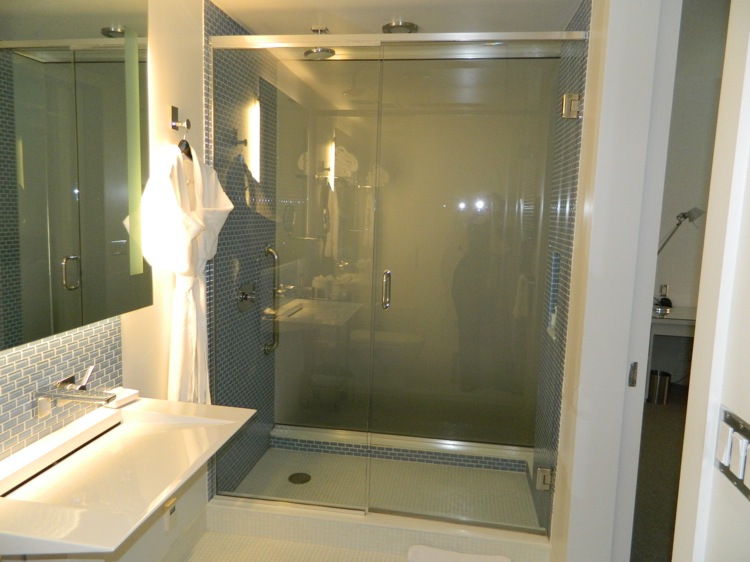 We are early to bedders, early risers, and early diners. So we headed to Punch Pizza for an early dinner, ordered our personal pizzas and a salad each, walked over to our table to set our napkins and iced teas down when they man behind the counter shouted, “NUMBER 188! ORDER NUMBER 188!” Well, our number was 188 and it hadn’t been three minutes since we’d ordered it. Sara told us the pizza there is baked at over 1000 degrees in a huge, hive-shaped brick oven, but I had no idea it would be so fast. I suppose in our internet age, people want things now. But having our pizzas ready before we could walk across the room? Hmmm. 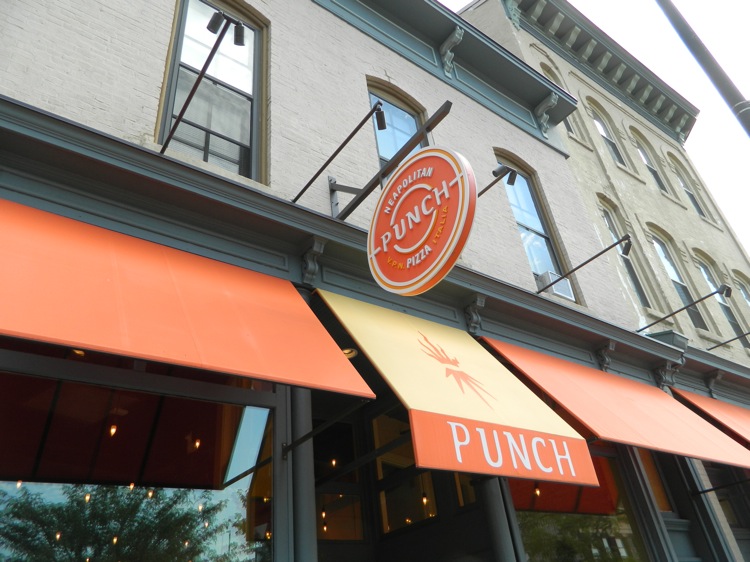 The pizza was fantastic, my Walnut-Gorgonzola Salad unique and delicious, and Michael was ready for a nap. He knew he had about a hundred people to see the next day at Struthers, so we returned to our hotel. 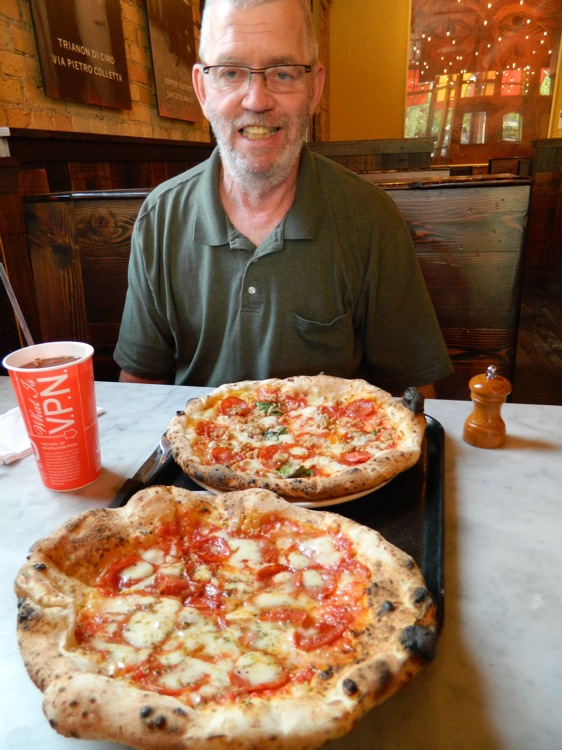 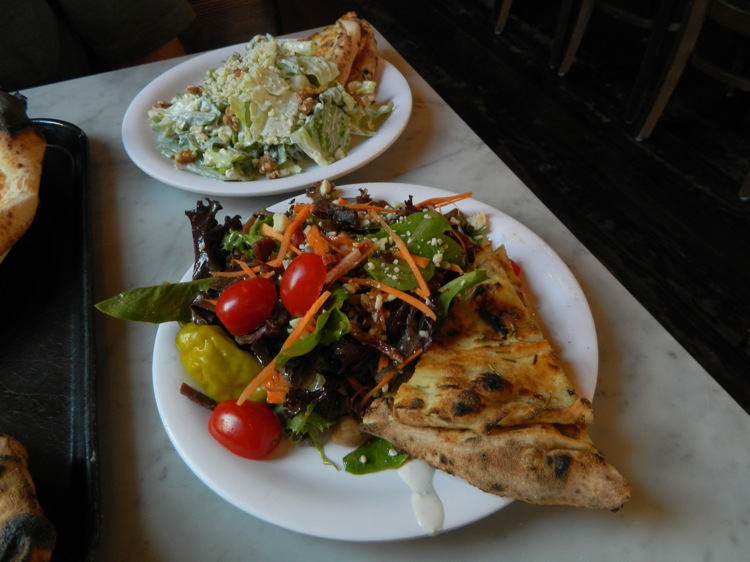 I’ve been looking for some art to hang above the new mantel over our new fireplace in our new dining room in our new house. Do you think something like this should be considered? Does this canvas in the hotel lobby vibe Juliejuliejulie or Michaelmichaelmichael to you? 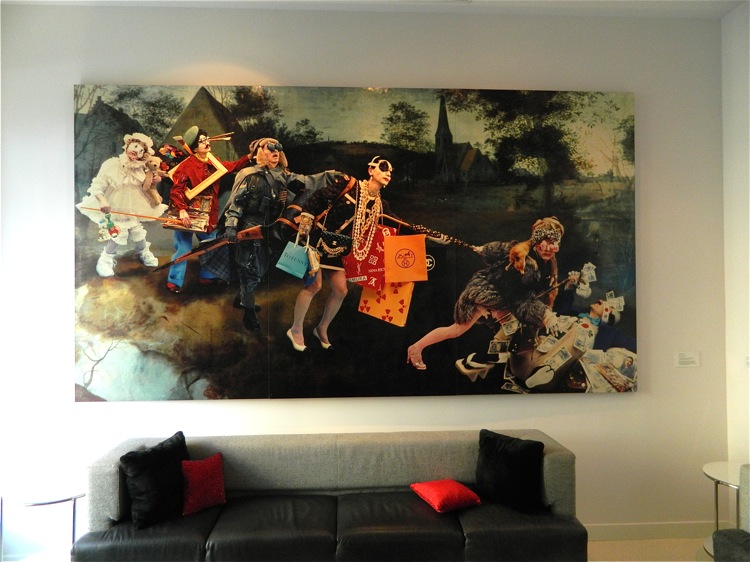 I’m not sure that we’ll stay at the Le Meridien again, but it was a fine experience. I think we might try Punch Pizza again someday, but maybe we’ll sit down in our booth for a while before we order so we can not have a conversation but look into each others’ eyes and smile knowingly, which is what we do a lot across dinner tables these days.

What do you look for in a hotel?

What are some of your favorite places to dine?