Rub a dub dub,
Three men in a tub,
And who do you think they be?
The butcher, the baker,
The candlestick maker.
Turn them out, knaves all three.   (James Orchard Halliwell)

When you were little, what did you want to be when you grew up?

I remember wanting to be an astronaut when I was about 10. I think I held onto that aspiration for about a month or so.

By the time I reached my teens I knew I should plan to go to college and get a degree, but deep down inside I really just wanted to be a wife and mother.

I also remember wanting to be a teacher or a nurse, and after graduating from high school I was enrolled in a local college’s RN program.

When I was in my thirties, aside from being a wife and a homeschooling mother, I sort of wanted to be three other things.

And a window painter.

I’ll talk about my midwife apprenticing another time…it was something I loved but eventually saw that it wasn’t meant to be.

I’ll talk about why I wanted to be a mortician another time too.

When I was in high school I was one of the student sign painters. Every football or basketball game, we always hung long banner-like signs with huge block letters that said inspiring directives like, “Go COLTS!” and “Tromp the Trojans!” and “Hammer the Huskies!” After a couple of years, I could pencil in the 2-foot high letters and have them painted in just a few minutes, and I liked doing it.

When I returned from living in Germany in the early 1980s, I got my first window painting job at a business in Orange County, California, painting a comic-like Christmas scene on their large front windows. I painted a long-nosed and cranky looking Ebenezer Scrooge with a top hat, a scarf wrapped around his neck and blowing in the wind, and he held two bulging bags of money in each hand. Snowflakes fell around him and above his hat in those huge, high-schoolish letters were the words “Merry Christmas.” A word bubble came from his mouth to show he was muttering, “Bah. Humbug.”

After Christmas I washed the paint off the windows as part of the window painting package, and thought about having business cards made up so I could have a little business on the side. I was an office supervisor for a large private investigating company back then. Thirty years ago it was quite common for seasonal themes to be painted on business windows, and some places also painted their sale advertisements on windows too. I don’t see that so much anymore.

Anyway, my window painting days were rather short-lived, because I was swept off my feet by a Minnesota man who asked me to marry him before we ever met. I said yes and moved to American Siberia in 1981, and was thankfully able to be a wife and a mother again for my vocation, having given up private investigating stuff and Southern California altogether.

A few years later when various friends had babies, I picked up my paintbrush again. Sometimes I painted a welcome sign or a birth announcement on their house windows, so something unique and memorable would be waiting for them when they arrived home after giving birth in the hospital.

Here is one example below. My good friend Bob King (who also worked for our local newspaper) took this photo of me as I was standing on a ladder and painting in pink and white, “Howdy Holly! Welcome!” on the front window of friends Sue and Dave’s house. Holly was their third child and first girl, and that was something to celebrate in a big way. 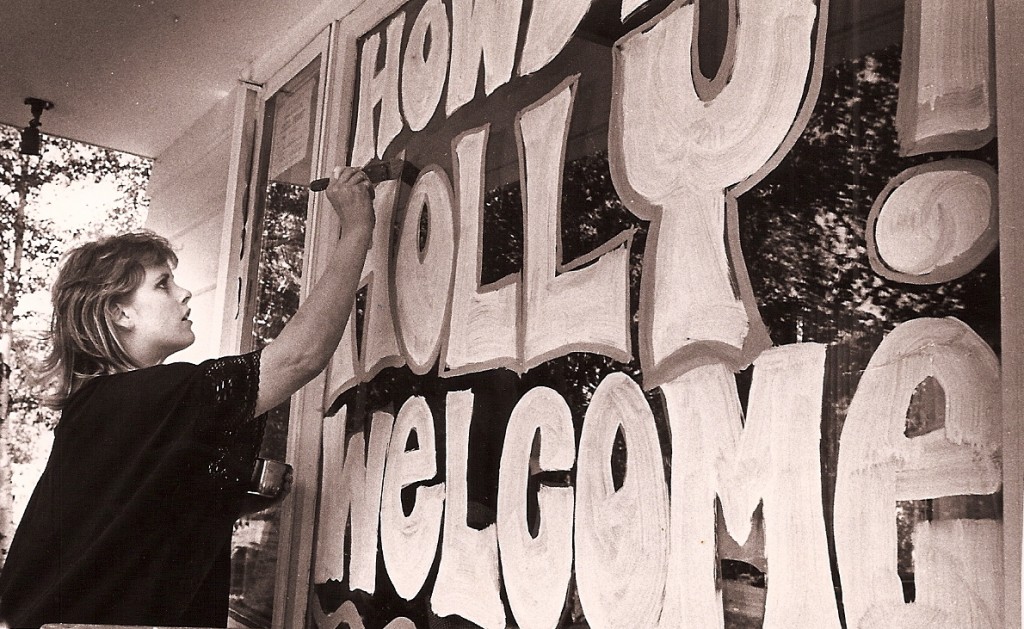 Holly is all grown up now, is married and has a little girl of her own, and I’m too old to climb ladders and paint windows anymore.

I don’t really want to be a midwife or a mortician at this age, either.

I like what I’m doing now, and am so thankful for my job. (Most of you know we are adult foster care providers in our home.)

How about you? When you were young, what did you want to be when you grew up?