There will be suffering…

Does it seem to you like people everywhere are going through harder things than you’ve ever remembered? It seems like that to me. Maybe it’s just my age, and I’m more aware. After all, things have been pretty horrible in the world before the calendar flipped the page on the twenty-first century.

I started my seventeenth year in Community Bible Study yesterday and for the next thirty weeks we’re going to study 1 and 2 Corinthians. Already I’ve learned just how unbelievably depraved things were back in the days of Paul the apostle, somewhere around 50 A.D. There were things going on in Corinth that almost made my jaw drop to hear about them, and some of these things were happening in the Church. So maybe things today are just the same old, same old, and there really isn’t anything new under the sun, as Solomon said. I don’t know though.

I have friends who have sorrows that burden my heart so heavily I hardly know what to say to them. Christian parents estranged from their Christian adult children. Parents who have been prevented from seeing their only grandchildren because the family withholding visitation is erring on what they think is the side of truth rather than on the very needed side of mercy. At least that is my perspective.

I’ve written about some of this before and it’s still baffling to me.

I know a Christian family torn apart by the Christian father’s lies and bizarre behavior, and he still doesn’t have a clue that he is the problem. He turns on a dime to attack and betray those he says he loves, then gushes words of devotion to them the next day. He talks incessantly about Jesus and forgiveness and doesn’t understand why he doesn’t have the trust of his wife and respect of his grown children when he still has a pathological lying problem.

I know a man who studies the Bible for hours a day (no exaggeration) and teaches the Bible, yet screams and swears at his sweet family and calls them hateful names for ridiculous infractions you’d think I was totally making up, they’re so inconsequential. When he gives his testimony in public settings, he tells mind-boggling lies about his life to make his “conversion” seem more dramatic. His family has pleaded with him to allow his faith to spill over into his real life, but he just gets more demonic as the days go by.

I know of a man with an exquisitely lovely young wife, and his secret back alley and bathroom stall life was recently exposed, and their romantic little cottage with the chickens and the dogs is no longer home to a newly married couple. She moved away to start anew and he never once apologized for his deviant, destructive choices.

I know believing people whose spouses have been the source of such pain in their lives, they think death seems easier. One dear mother of five I know learned a while back that her Christian husband has been a serial adulterer, says he doesn’t love her anymore, and seems very matter-of-fact about divorcing, and not very broken hearted about what this has done to his children.

And I know a family who seems to be haunted by a spirit of depression. Prayers are prayed, help is sought, Bibles are read and verses memorized, praise music is played, dark spirits are rebuked, and still those family members struggle deeply to stay alive and put one foot in front of the other.

Shall I go on? I think not. But I could. And I’ll bet some of you could list some tragedies of your own, things so deep and painful you don’t really want to talk about it. And maybe you don’t even pray about it much anymore.

And now here comes my latest tale of woe. Yesterday after CBS I drove up to spend the afternoon with Michael in the veterans home where he receives nursing care. I was so excited to see him. One of his favorite meals was served for lunch: hearty helpings of meat loaf, mashed potatoes and gravy, fresh buttered carrots, a wheat roll with butter, and a lemony cheesecake dessert. He and I sat outside on the patio in the beautiful autumn sunshine and I helped him eat his meal. It was peaceful. He wanted to go lay down for a nap after that and we squeezed together in his twin bed, comfy and happy to be together. I thought. Michael then told me he was despairing of life and couldn’t take another day. I burst into tears at this declaration and instead of trying to comfort him and pray for him, I boo-hooed that I couldn’t believe he was adding this burden to my heart since he knows how difficult things are to begin with.

Right around this point Michael’s social worker, a very kind and competent woman, knocked on the door softly, and came in to speak to me about how things have been going with Michael these past couple of weeks. Apparently my patient and gentle husband has been yelling, striking out, running back and forth for hours until sweat drips off his face, and looking for ways to get out of the large bay windows in the dining room of his residence. This is the face of Lewy Body Dementia. This is what happens in the evenings when he goes through an episode, and when it’s all over and the staff can finally help him to lay down and go to sleep for the night, he wakes the next morning quite cheerful, not remembering any of it. In fact, when Michael’s social worker was describing to us what was happening with more frequency, Michael looked shocked and said he would never hit anyone. I completely believed him. I suppose it’s a mercy that when the Lewy Body rears its ugly and grotesque head, Michael isn’t fully conscious of what he’s doing. There are days when his Parkinson’s-afflicted brain won’t let him walk even three steps or speak above a whisper. Then there are times when the Lewy Body disease kicks in and he can run, jump and shout. It almost seems surreal to type all of this, to say that this is what our lives are now.

The staff began documenting when these LBD episodes were happening, to see if they could discern if something was triggering them, to better help Michael. At a meeting yesterday, I was told that they believed they had figured out what was triggering most of his distress, which would then set off terrible hours-long episodes.

Guess what the trigger is?

I felt yet another wave of grief wash over me when they gently told me that right after my visits with Michael, these episodes come on. He does better on the days when I’m not there.

He does better on the days I’m not there. 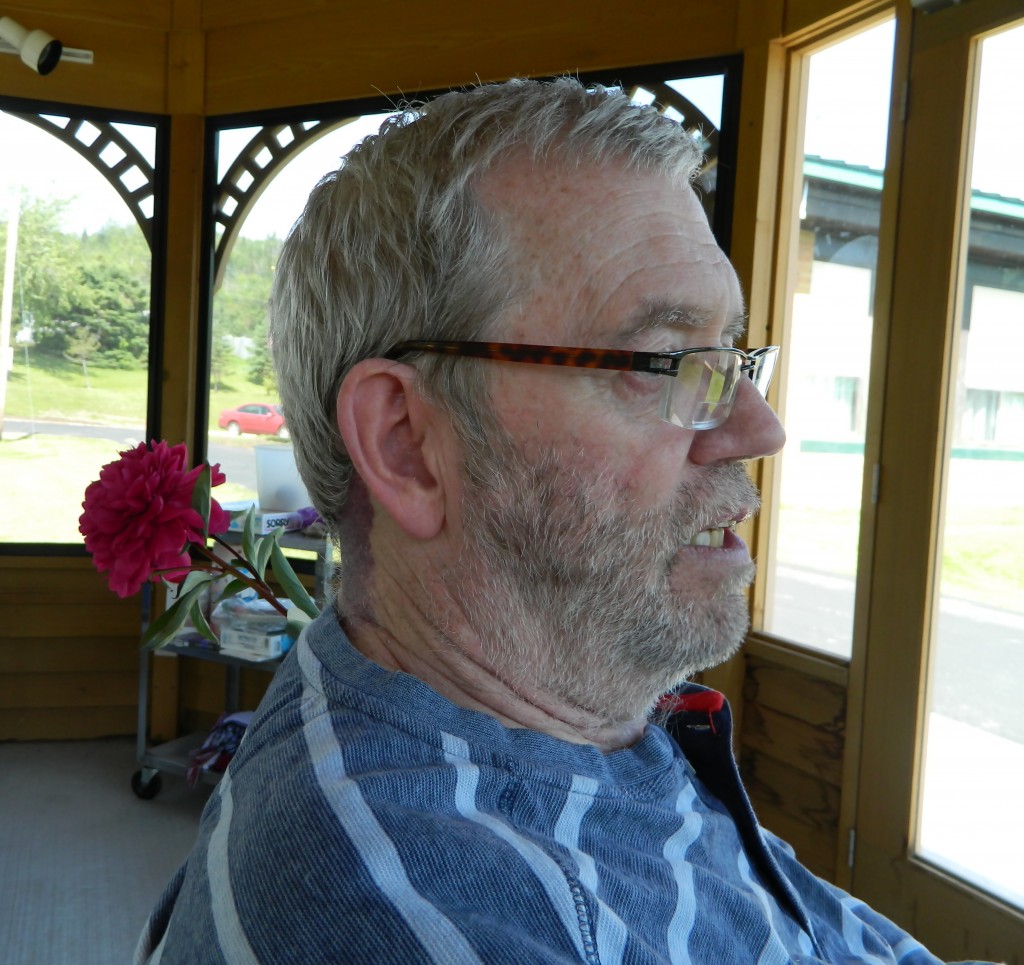 And they also noted that he becomes upset after I call him on the phone. I’ve been driving up three days a week (and sometimes four) to be with Michael and we usually have a nice, pleasant time together (considering the circumstances), trying to make the best of this. And I’ve been calling him twice a day, once in the morning after his breakfast and once in the evening after his dinner, to be a comfort to him and to tell him how much I love him. They told me my evening call was a trigger for him, since he exhibits some of the “sundowning” behavior that many dementia patients do.

So they compassionately asked me if I would not come up to see Michael so often. They thought two days a week would be good to start, to see if he would do better and have less distress. And they asked if I would only call in the mornings from now on.

It took me some time to process this and to understand that it’s not my presence that’s upsetting to Michael. It’s my departures. He is relatively calm and happy when I’m there. And apparently when I leave to drive home in the afternoons, he just can’t take it. His social worker and one of the head nurses even told me they think that somewhere deep inside Michael thinks that each time I come to see him, I might be there to bring him home.

Today I grocery shopped, and cried. Then I went to Great Harvest to buy French baguettes, and I wiped tears when I got back to the car. I drove to the post office and to the drive-through pharmacy, and I couldn’t stop thinking about how much anguish and pain my decision to place Michael in a skilled nursing care facility has brought to him. When I got home I carried in the groceries, put them away, and sat in my bedroom chair and knitted for a while, tears welling. I did laundry, made a pot of soup and let it simmer all day, and thought about how much my husband would love a steaming bowl of beef vegetable soup at our table with chunks of bread to dip in the broth.

There isn’t one person who has advised that I should bring my husband home, knowing what his prognosis is and how quickly the Parkinson’s with Lewy Body Dementia seems to be advancing. Well, there is one person who thinks it’s a sin that I am not still trying to care for Michael at home. He has no idea what it’s like to care for a person who can hardly do one thing for himself, twenty-four hours a day, seven days a week….but he told me recently in so many words that 1 Timothy 5:8 is my clear mandate. Are you familiar with that verse in the Bible? Here it is:

But if anyone does not provide for his relatives, and especially for members of his household, he has denied the faith and is worse than an unbeliever.

I guess I don’t need to say that the words he offered me did not bring comfort.

Soooo, on that note I think I’ll stop rambling for now. It seems to me like life is getting tough for so many people. I want to walk closely with the Lord and I want Him to comfort me. I want Him to comfort Michael. I want to be a comfort to my friends and family, and I certainly want to be a comfort to my husband. Sometimes I’m not sure how to do that anymore, so I pray. And cry. And pray some more.

Here’s something from the Bible (Amplified Version) that does bring me comfort, the very words of my Savior:

“I have told you these things, so that in Me you may have [perfect] peace and confidence. In the world you have tribulation and trials and distress and frustration; but be of good cheer [take courage; be confident, certain, undaunted]! For I have overcome the world. [I have deprived it of power to harm you and have conquered it for you.]”

God’s peace to us all,