The Trailer on the Banks of the Yuba

My first home as a married woman was an old three-room trailer on the banks of the Yuba River in Smartville, California.

I remember the day Glenn and I answered the ad, and drove down the rutted, dirt driveway from Highway 20 in the foothills of the Sierra Nevada mountains. The trailer measured 8 feet by 48 feet, and its dented metal sides were yellow on the top half and a dusty mustard on the bottom. Two wooden steps led to the door that opened into the tiny living room that smelled of years. 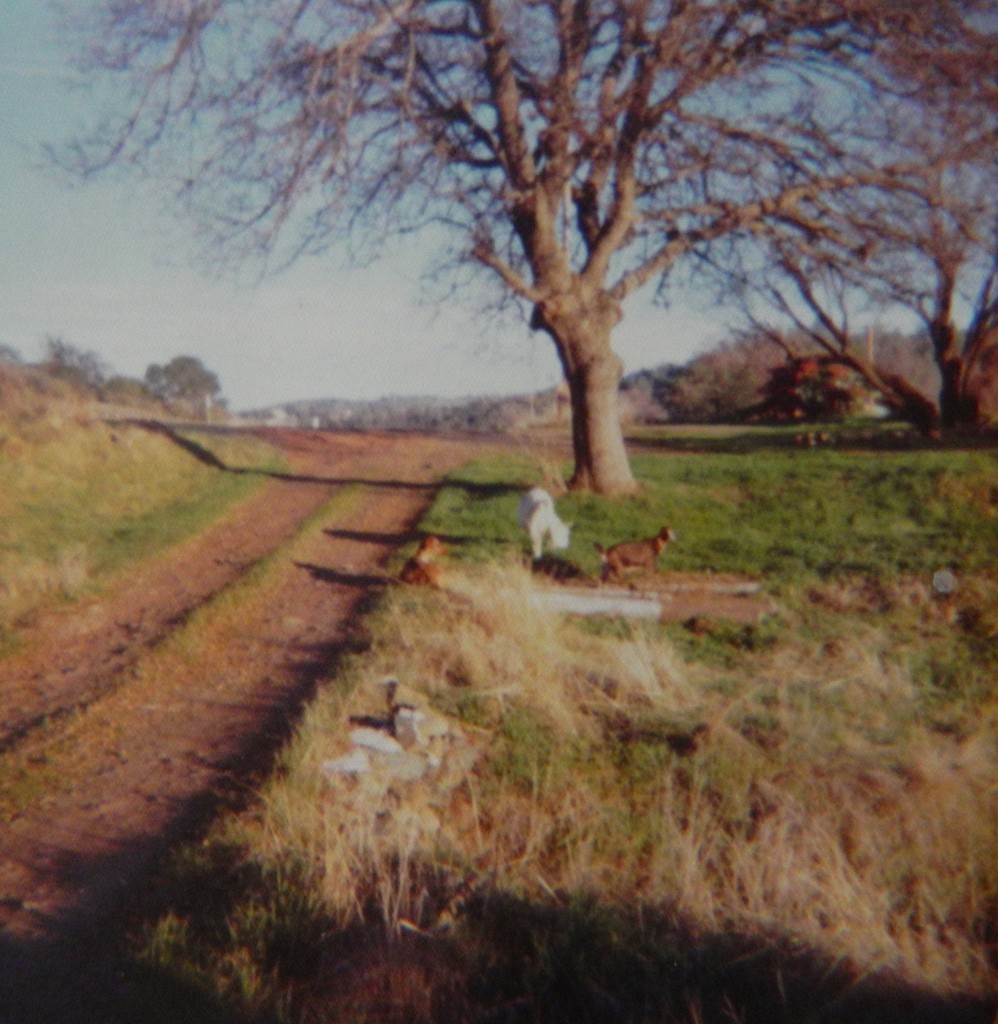 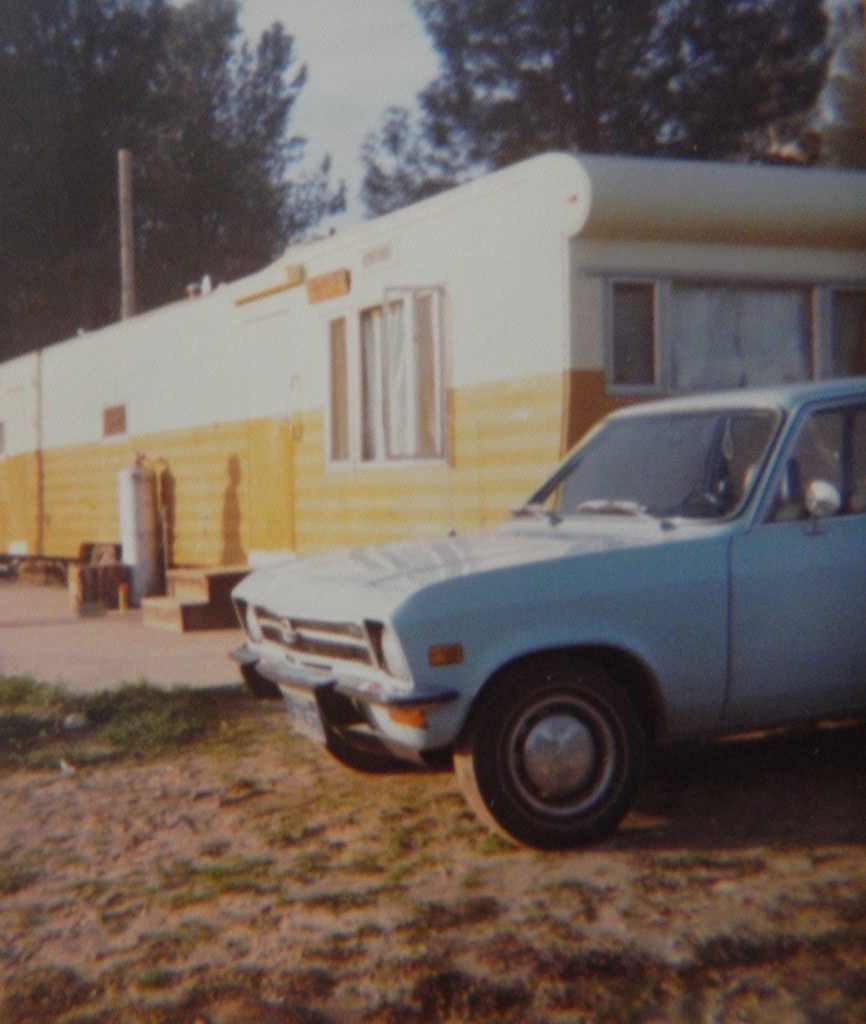 There was thin, stained avocado green carpet with no padding underneath. Plastic curtains with a swirly green print hung on pencil thin rods above the windows. Glenn and I could both touch the ceiling without fully extending our arms. 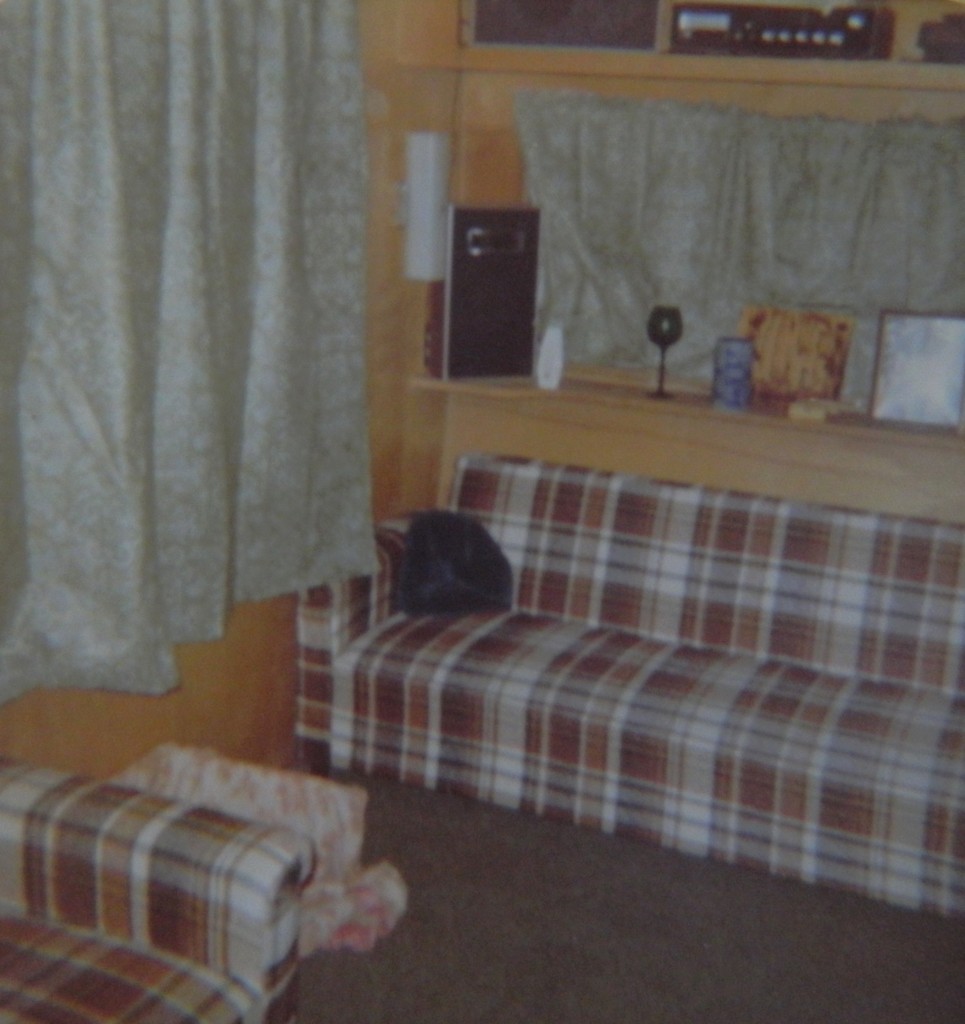 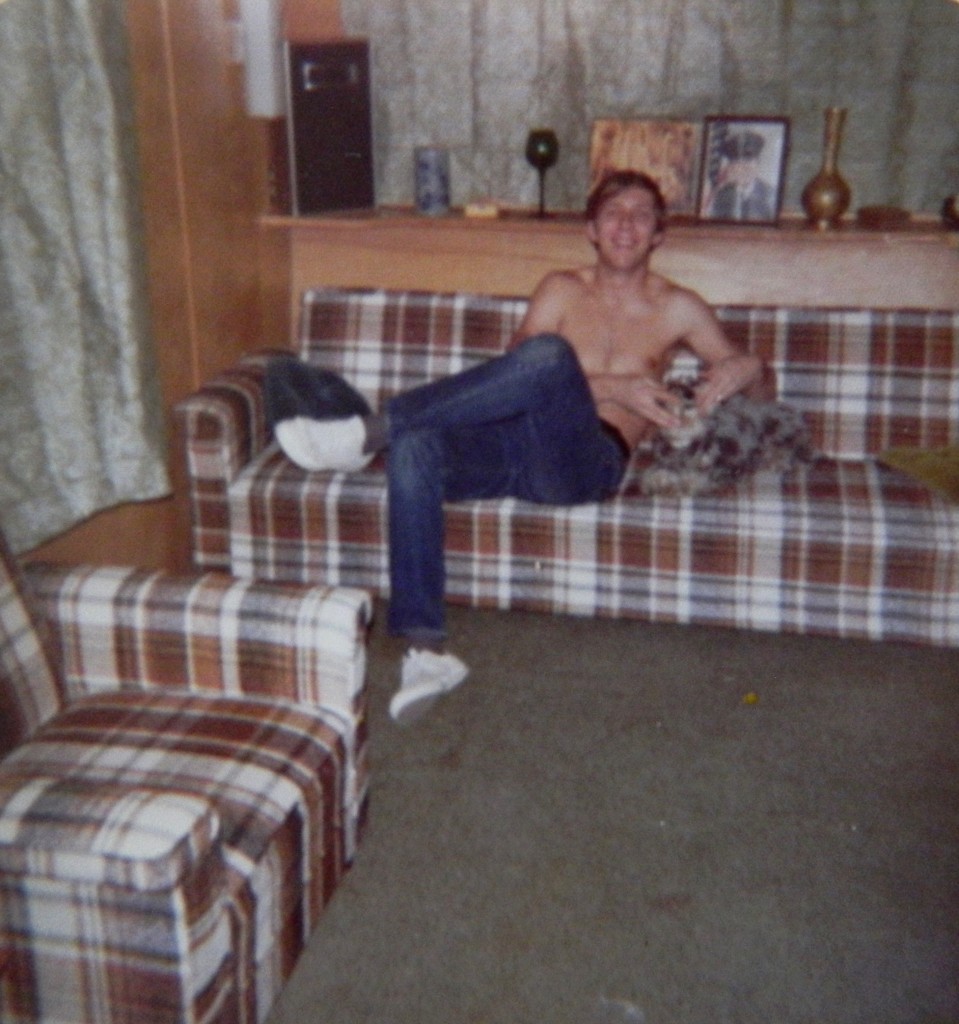 Six inches from the living room, a worn yellow Formica table with chrome and vinyl chairs from the 50s sat on one side of the narrow kitchen, under a large window that looked over a neglected, weedy garden, and up onto the highway. Across from the table was a big gas stove that had to be lit with a match, a few cabinets with just enough room for the dinnerware from my hope chest, and above the sink was a small window that looked out onto the winding Yuba, where miners had panned for gold a century before. 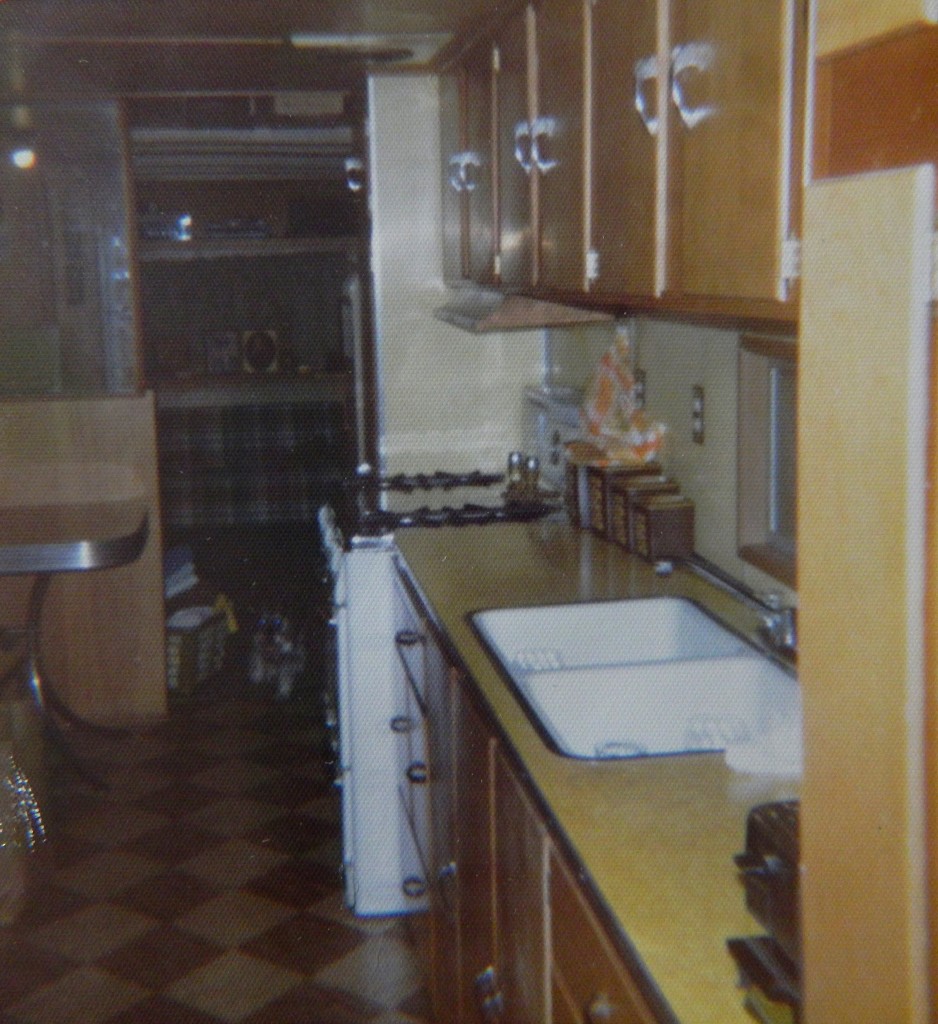 The closet-sized bathroom off the kitchen had a sky blue tub encrusted with rust, a leaning toilet and a mixing bowl-sized sink. Someone had pressed contact paper with a blue and white design on the walls above the sink, but left the air bubbles that were trapped underneath. The shallow tub would require one to sit straight with knees bent to have a bath. 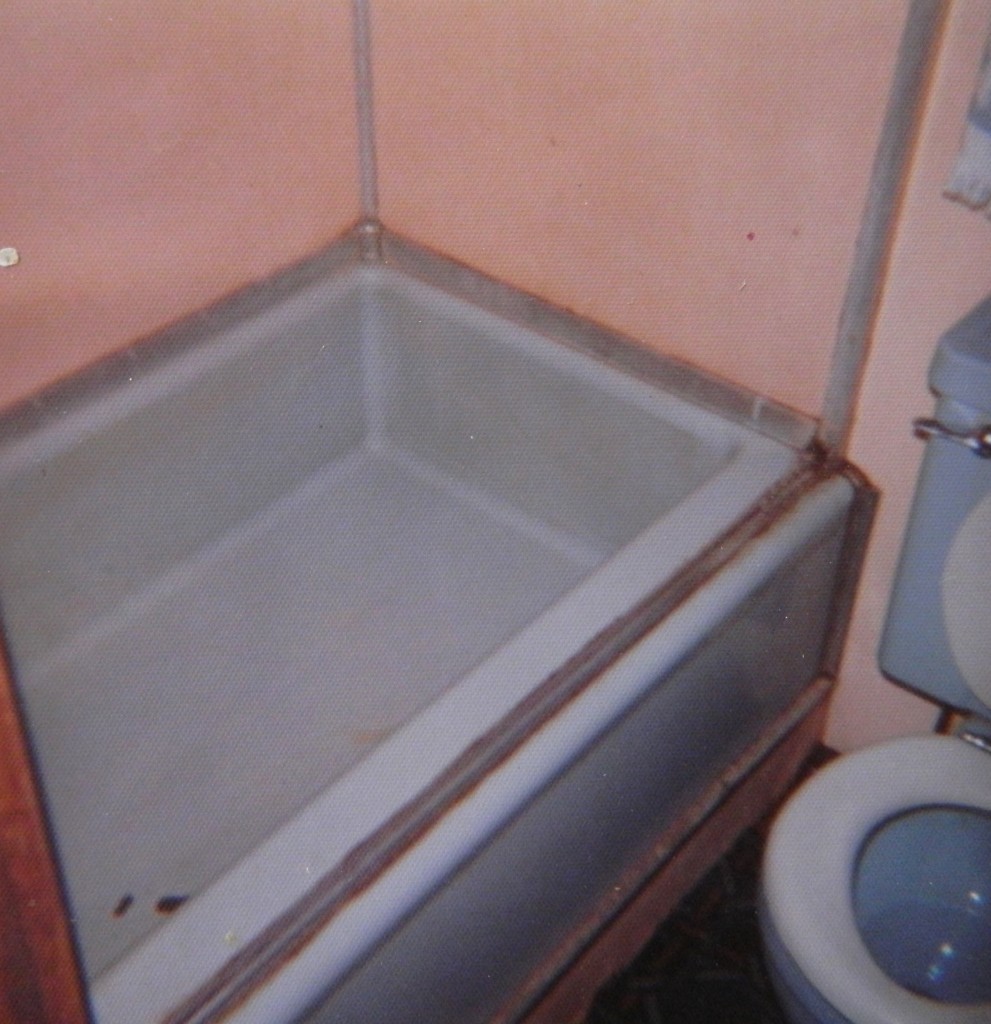 The bedroom was at the end of the trailer, and would just barely fit our double bed and tiny nightstand. We could see that whoever slept farthest from the door would have to crawl over the other to get to the bathroom. 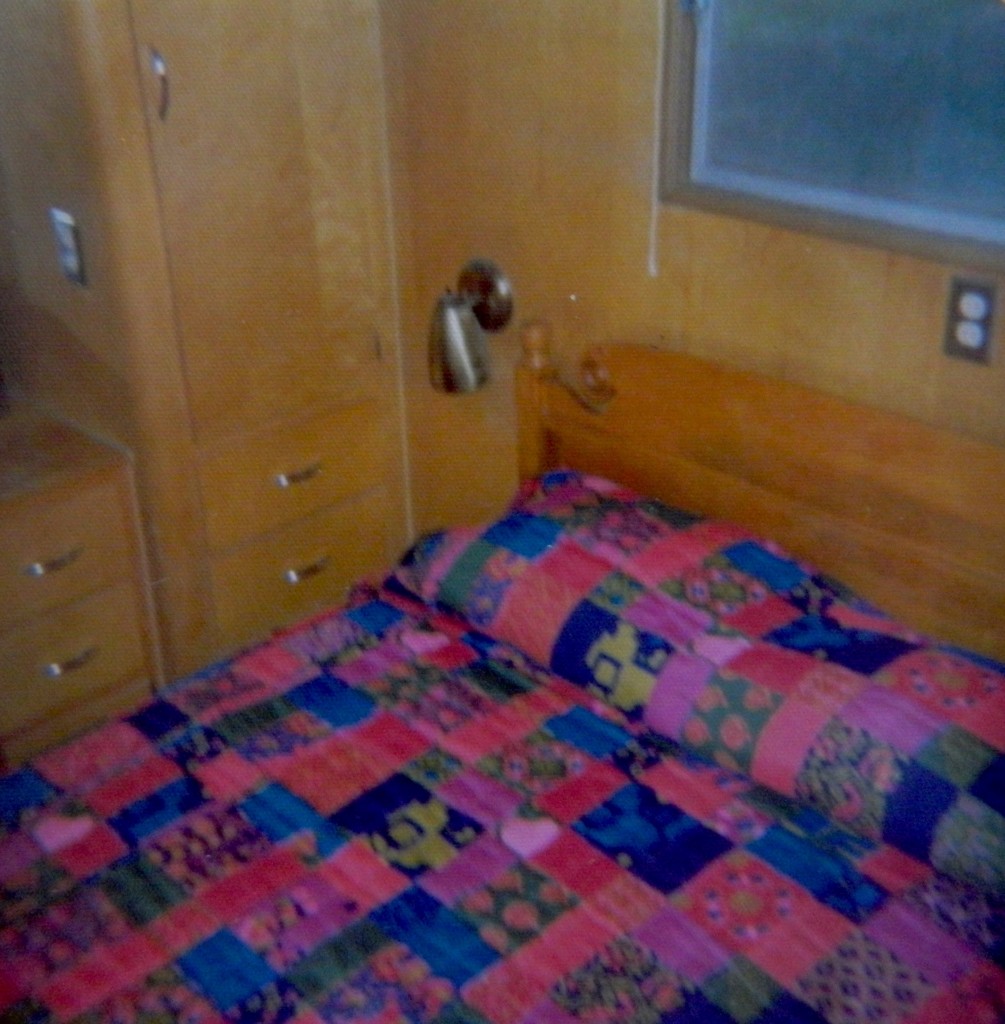 While Glenn drove the twenty-five minutes each day to work for the United States Air Force, I housewifed. I set up the ironing board in the tiny living room while I listened to Fleetwood Mac and James Taylor albums on the turntable we had put on the shelf above the couch. I ironed Glenn’s uniforms; green fatigues and dress blues, depending on the day or military event. I had a basic Kenmore sewing machine and I placed it on the coffee table and sewed caftans for myself and a few Hawaiian shirts for Glenn. I swept the steps, Pledged the furniture, made throw pillows for our little plaid couch, and learned to cook. 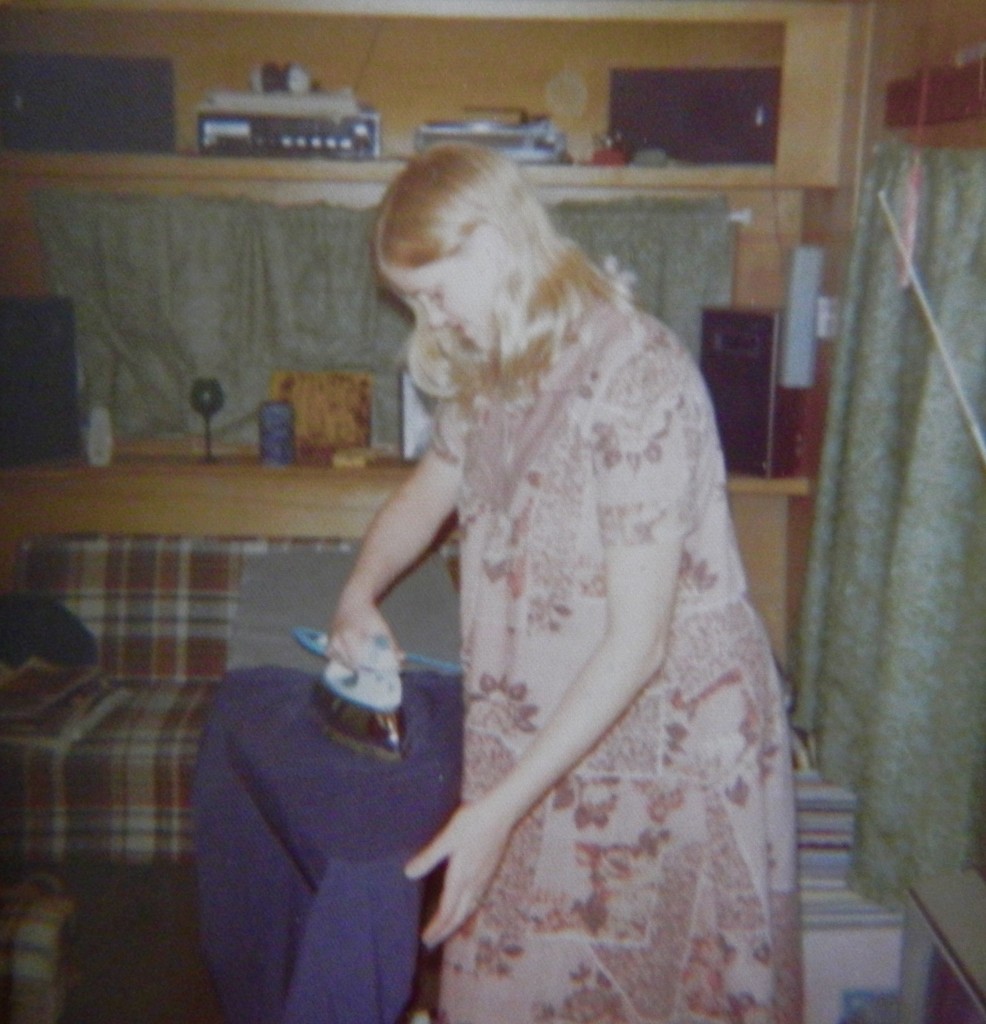 I asked Glenn’s mother for his favorite recipe of pepper steak and rice, and one afternoon when I had the car, I thought if I left the gas burner under the skillet on low, all the savory liquid would be soaked up perfectly by the time I returned from picking Glenn up from work. When we walked in the door about forty-five minutes later, we were assaulted by the smoke from carbonized bits of beef and black, charred rice that had become one with the bottom of the pan.

We used to walk down to the river in the evenings, and I waded around the shallows while Glenn tried his hand at panning for gold.

To our left and down some was a two bedroom house rented by Sam and Janis, two fabulously creative hippies from Shepherdstown, West Virginia, who owned several Nubian goats and had a child’s antique coffin in their living room. I learned to milk a doe and castrate a baby buck with a rubber band, but the taste of goat stew was something I never fancied. 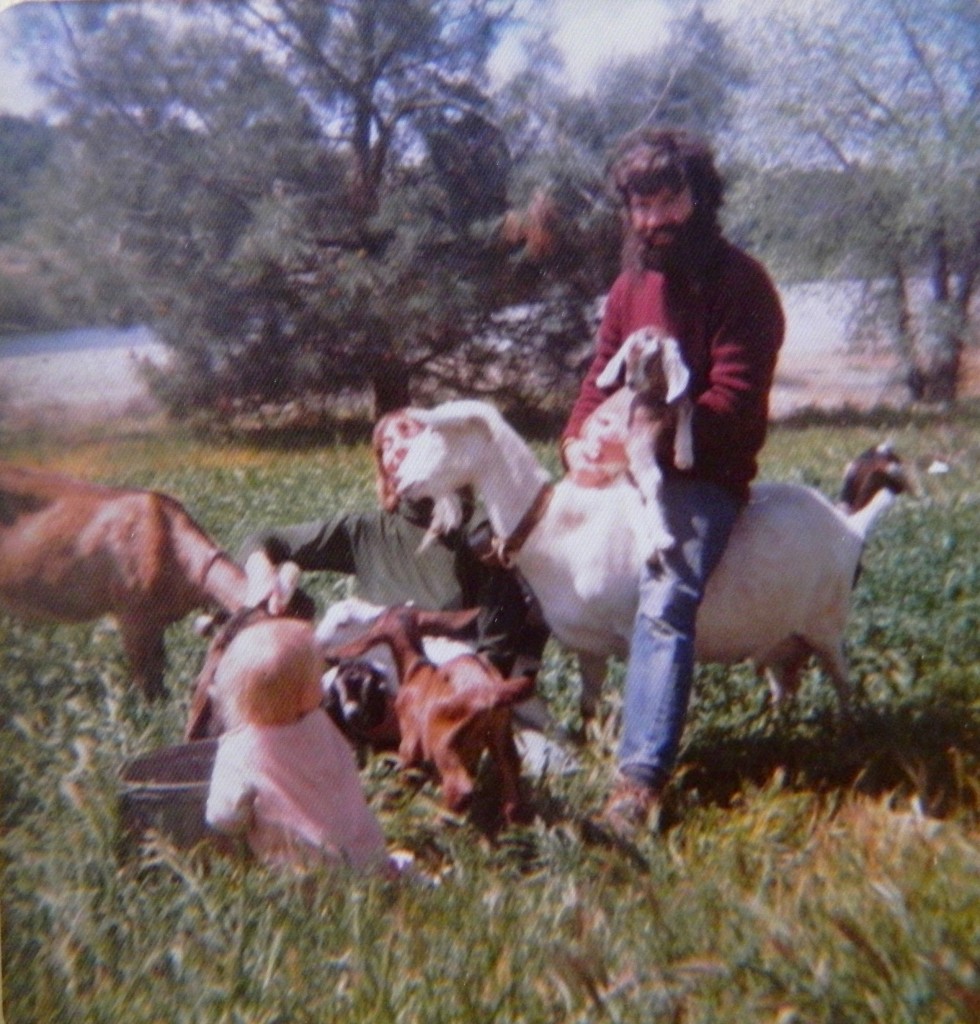 To our right and up the hill was a newer and roomier trailer, where Joe and Dilly Poindexter, the antithesis of Sam and Janis, had come from Southern California to retire. Dilly fried her hamburger patties in Crisco shortening and Joe smiled out of the side of his mouth, smoked cigars and drove a long, low gold colored Cadillac.

We only lived in our skinny little trailer for half a year before a three bedroom house became available on the base. Four years, two continents, and two daughters later, Glenn decided to look for gold elsewhere, and thought he could holler “Eureka!” with Karla. She turned out to be pyrite and I wasn’t too terribly heartbroken to hear of it.

I looked at that same trailer yesterday on Google Earth, and was able to zoom in from a street view to see it hasn’t changed much. Weeds skirted the base of it and the dwindling Yuba meandered 50 yards from the front door.

I remembered how tiny our home was, how flimsy and make-believe everything inside seemed, including our marriage, now that I have the perspective of 40 years. Plastic curtains and vows, veneer walls and words, mice and women coming into our midst through the cracks we didn’t know how to seal.

Psalm 18:19 says, “He brought me out into a spacious place, He rescued me because He delighted in me,” and the hope and truth of this verse came to pass in my life, with another man whose vows were made of rock, another home with curtains of real cloth, and another place entirely, yet one where I can still see water from my kitchen window.