Our Thanksgiving celebrations are usually very traditional and predictable, but yesterday there were a few things out of the ordinary that I thought I’d chronicle and share on the blog. I also want our daughter Sharon and her family to be able to peek into our day (hi Sharon – we missed you all so much!), as they were celebrating at home in Maryland. Having them with us would have made the day perfect. But I think near-perfect is enough to shout over.

The first departure from our ordinary was a gorgeous centerpiece. Our youngest daughter Sara is a floral designer for a shop in town, and she arrived with a couple of bags and soon set up a workspace on the kitchen table. She laid out newspapers to work on, searched around for a suitable vase, and set to work on a Thanksgiving centerpiece to bring even more beauty to our day. As if warm November weather in Minnesota, grandchildren and abundance wasn’t beautiful enough.

So just use your imagination here for a minute or two. Picture all these items in your mind, all piled together on a table: a dark blue serving bowl, a peony, a turnip, some cedar branches, a persimmon, a giant radish, a drying, shriveled apple, a rose, two pomegranates, a large leek, a clementine, some unripened blackberries, an artichoke, some toothpicks, tape, and lots of other various greens and stems.

Put them all together with deft hands and a visionary, artistic imagination, and what do you get?

What Sara got was our Thanksgiving centerpiece: 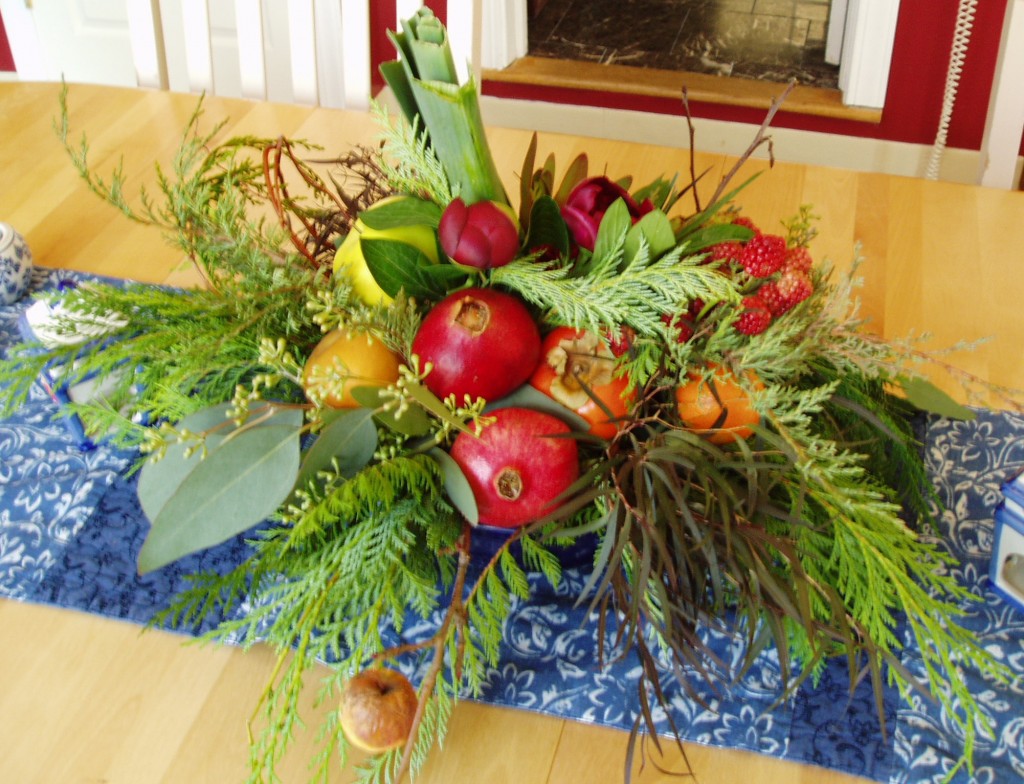 Isn’t it wonderful and unique? I hope it lasts until the new year. If it does I might have to call the folks at Mayo to see if they’re running low on the ingredients to manufacture a potent new broad-spectrum antibiotic.

The next thing that was out of the ordinary for our Thanksgiving was an appetizer I made. It has all of two ingredients, and I’m very enthusiastic about two-ingredient baking and cooking these days. If any of you have any two-ingredient recipes, send them my way. (My oldest daughter Sharon told me that she actually made mouthwatering biscuits for their Thanksgiving dinner that had only two ingredients, so maybe we have the beginnings of a best-selling cookbook here.)

I made a cheese-filled pastry thingy that oozed cheese as it baked. It wasn’t as pretty to look at as the photograph in the recipe, but the taste? There are no words. The two ingredients were Brie cheese and puff pastry sheets. I thought about editing out the part of the picture that shows the leaking cheese, but decided to keep it in, because somehow there’s a deep and profound symbolism about my life in a stark photo of leaking cheese. 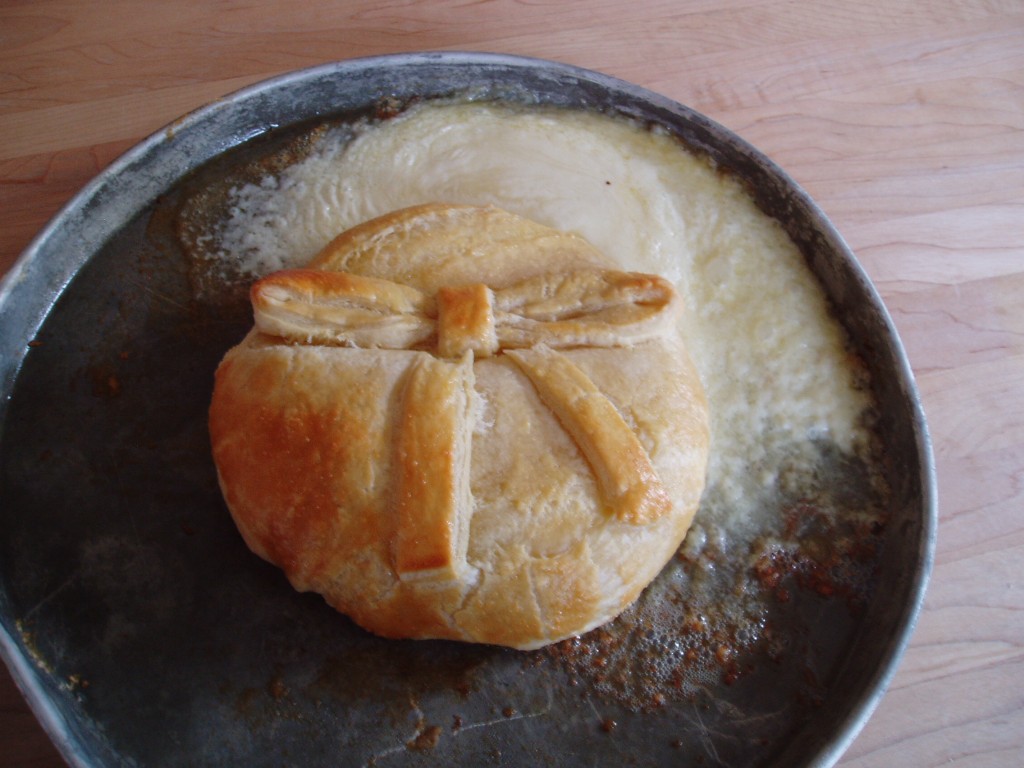 We cut this thing into small wedges and served them on little plates about an hour or two before the turkey was done. I’ve never seen so many eyes roll back into their heads at one time.

Here’s a sweet photo of four year-old Vivienne. Does she look like she has something to say to the world, or what? 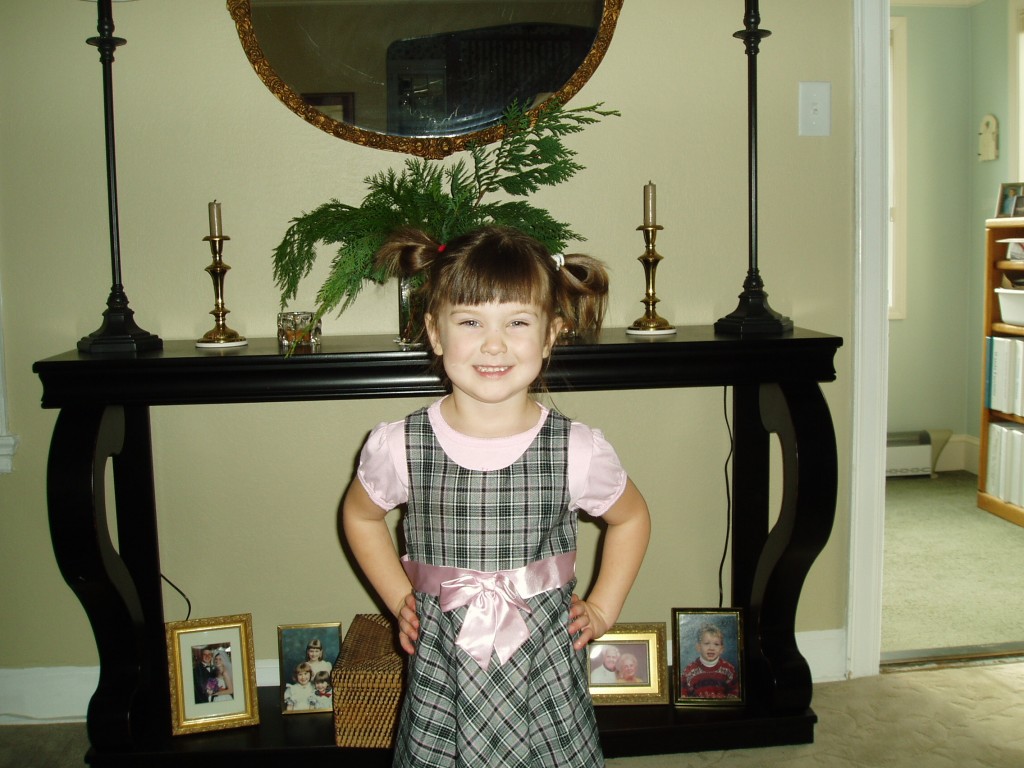 She later sang for us her rendition of “Twinkle, Twinkle,” and showed us how sashaying by the fireplace is done.

Our dinner consisted of a 17-pound turkey filled with sage and onion bread stuffing, garlic mashed golden potatoes and gravy made by Carolyn, who makes the best of both I’ve ever tasted, a tangy marinated vegetable salad, rolls with butter, cranberry sauce, a relish tray with olives and various veggies, pumpkin pie with whipped cream, and chocolate peanut butter fudge. No one named Atkins is allowed in our house. Next year I plan to make Jeremy’s favorite sweet potato casserole, and no year do I plan to make green bean casserole.

Another new thing that happened on Thanksgiving was that our Christmas tree went up. Sara set up the tree, Michael brought up all the decorations from the basement, and soon the grans were happily placing the ornaments while carols played on the house intercom/stereo (yesterday’s selections were “The Mormon Tabernacle Choir Christmas,” Amy Grant’s “A Christmas to Remember,” an old favorite of Julie Andrews with the Andre Previn orchestra, and Fernando Ortega’s new “Christmas Songs.”)

Here are Sara and Vivie adding more ornaments to the crowded tree. I love an ornament-crowded tree. 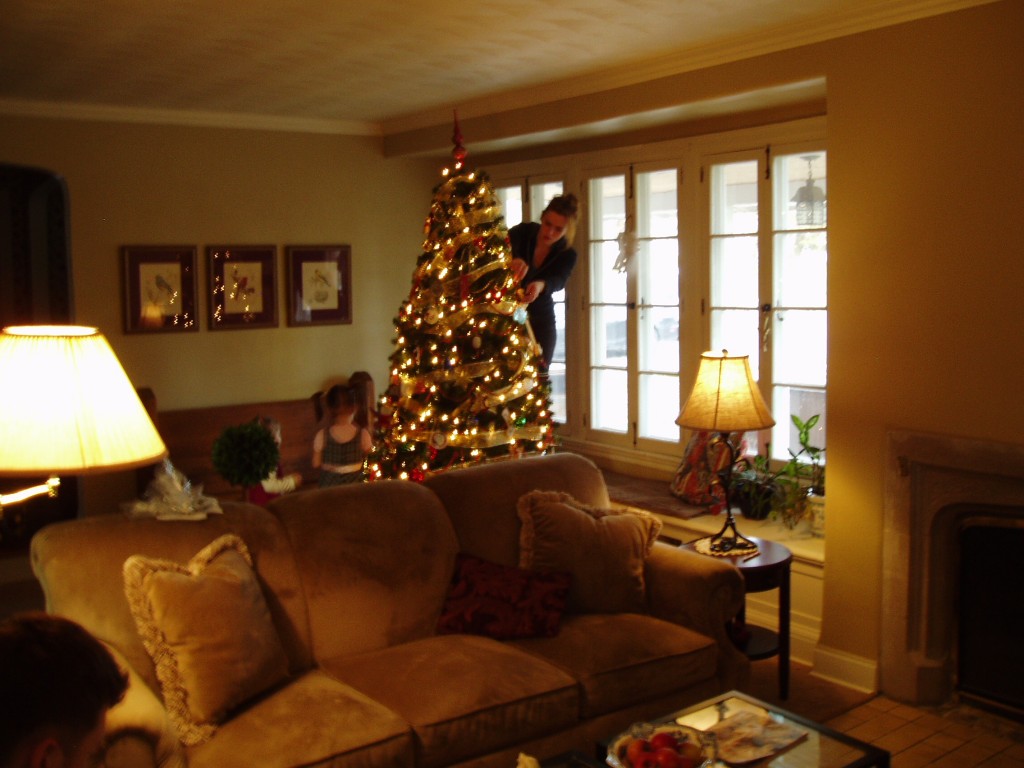 Elijah and Clara were very happy about being able to help decorate the tree too. 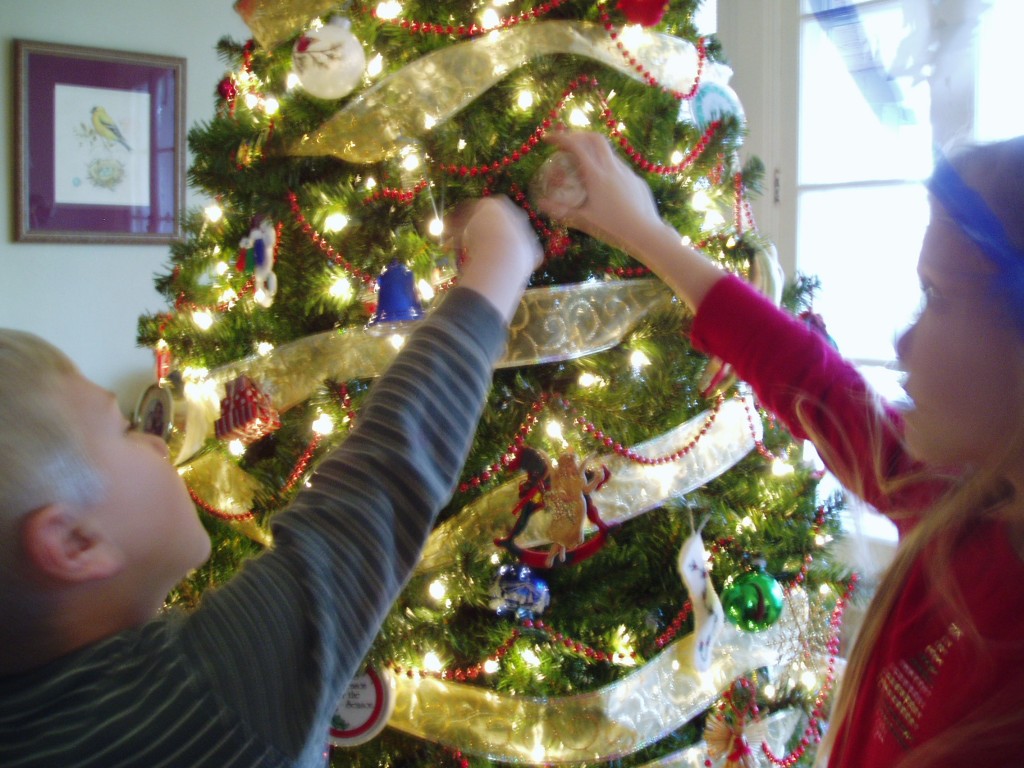 And mama Carolyn is helping little Audrey (almost two years old) add to the beauty. Although I must say with a bit of motherly bias that if Carolyn and Audrey are in a room, there isn’t much need to add to the beauty. It’s already there. 🙂 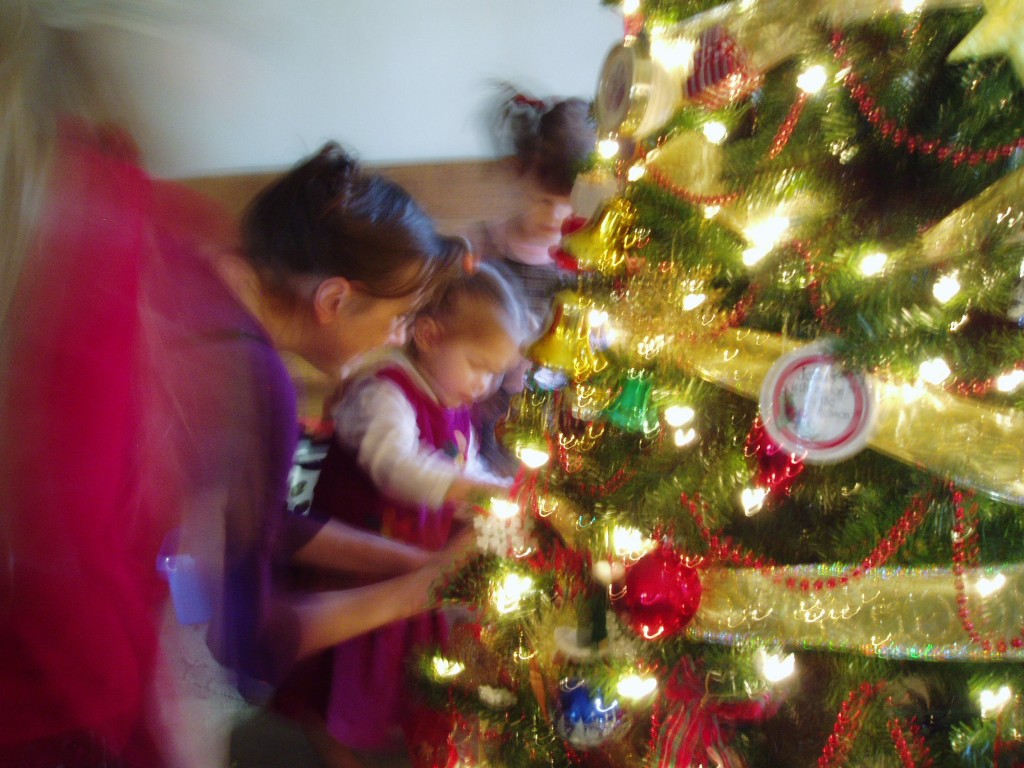 Daddy Jeremy lifted Clara high to put the dark red spire on top to complete the trimming of the tree. 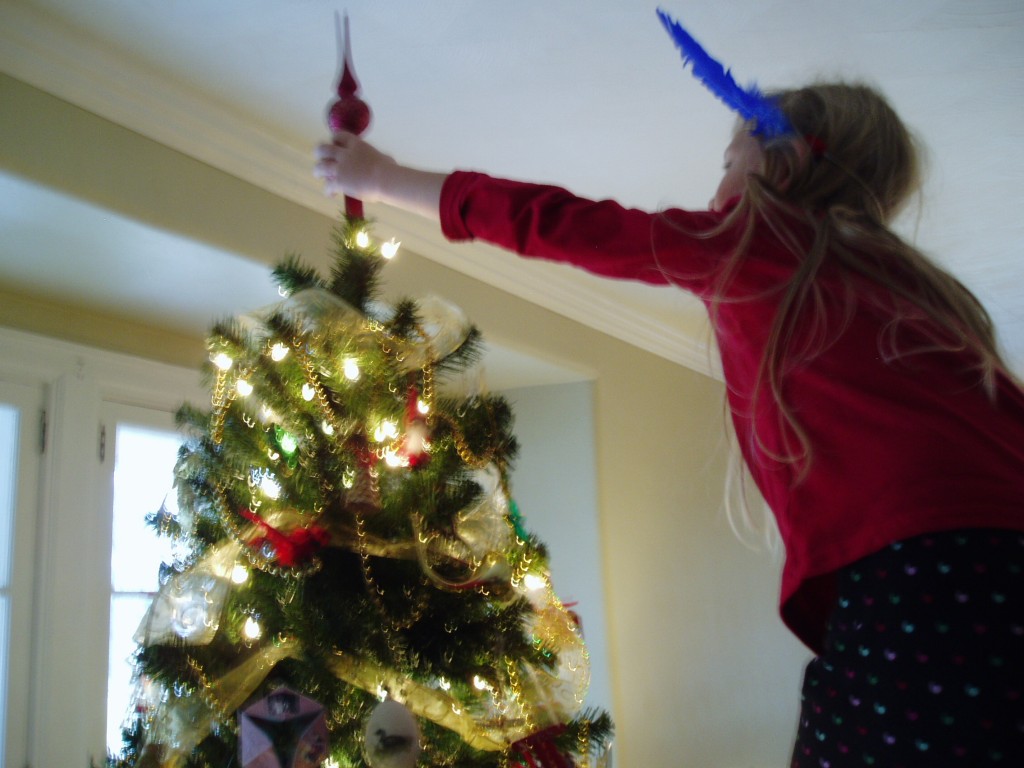 Clara had a feather in her hair and Elijah wore a black construction paper pilgrim hat to add to the historical roots of the day.

Here’s Jeremy sketching possibilities for a mantel/fireplace surround for our living room. 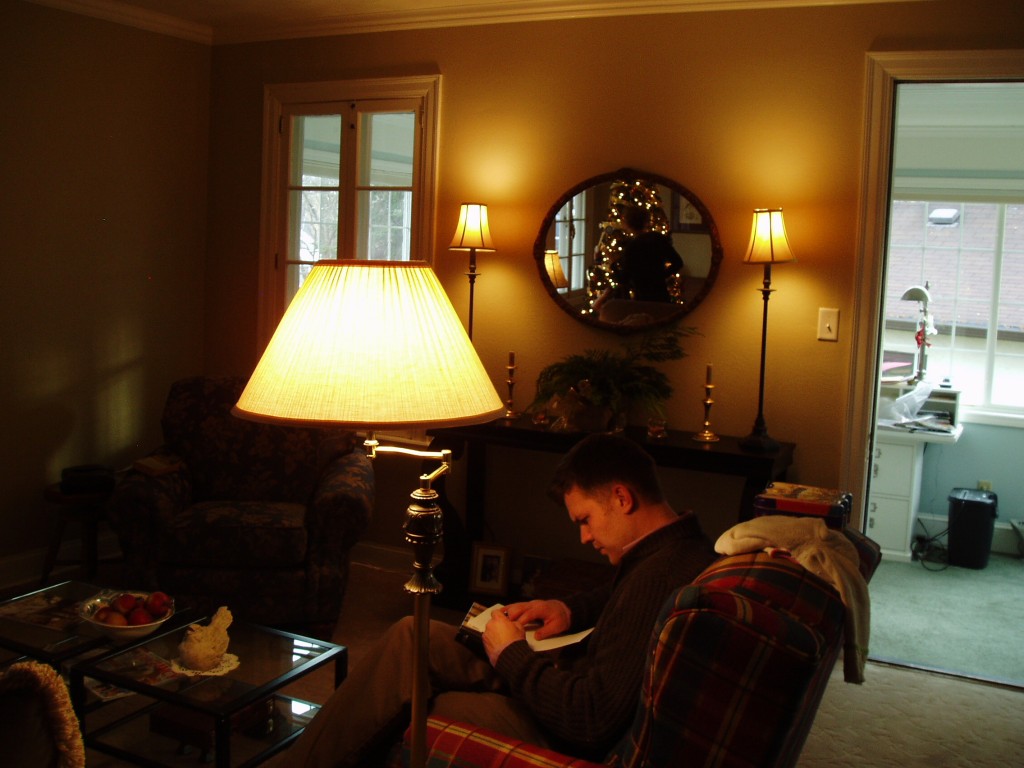 He can always figure out how things work, how to make them work if they’re not working, or design something himself that works better. At least that’s my opinion of my dear son-in-law.

As the sun began to set we sat in the living room and played a fun game called Whoonu? where players choose cards and earn points based on what they know (or guess) to be a fellow player’s favorite and least favorite things. Of course we knew that Jeremy loves construction sites, Carolyn loves ballet and Sara loves broccoli, but Whoonu that Jeremy doesn’t like glitter, Carolyn doesn’t like the scenic route and Sara doesn’t like brownies with nuts?  🙂

After everyone went home last night, Michael and I did a little cleanup. I decided to take one last photo of the tree before we went up to bed. Which, by the way, felt a little strange when we realized that he and I were alone in the house at night for the first time in almost a year.

We wondered aloud what we were going to do with the unusual opportunity. (Due to the nature of our business, we are almost never alone.)

As Thanksgiving of 2009 drew to a close, it was just Michael and me, and Schnauzers Edith and Millie, rattling around in this big old house.  After a minute’s discussion, we both agreed.

We would try to sleep in really late until at least 6:30 the next morning.

What was new or out of the ordinary about your Thanksgiving? What new dish was served? What new person attended? What beloved person was missing? What old dish did you leave out? What one thing will you remember?