I have heard people speak about the kind of breathing that happens when a loved one is close to death, and the hospice nurse mentioned this to help prepare us also. What was described to me never happened, however Michael’s breathing was becoming so labored it was difficult to watch.

Hour after hour passed on Sunday and our hearts were breaking to see his body under such strain just to breathe. Michael’s body temperature began to rise as well. I never took his temperature, but by Sunday night his skin was burning up and I would not have been surprised had it been 105°-106°. I called the hospice nurse to ask about this, and also mentioned how hard his lungs and body were working to draw each breath. She told me that this all meant that Michael’s central nervous system was shutting down and was to be expected. She encouraged us to give him liquid morphine every 30-60 minutes now, to help ease his breathing. I told her I was hesitant about giving him so much — I didn’t want to give him an overdose. I know that might sound odd to some, but I wanted God to take Michael in His timing, and I didn’t ever want to wonder if I had given him too much. The nurse reassured me that with the dosage we were giving him, we weren’t even close to those levels, and every 30-60 minutes for his comfort was entirely reasonable. I was relieved.

Michael’s wonderful daughters Buffy and Daphne were there all day Sunday, as was his sister Patty and his oldest grandson Jordan. We did what we had done before — gathered quietly around him, tended to his needs and tried to keep him comfortable in every possible way, and told him how much we loved him and what a wonderful man he was. Sometimes a few of us would stay in the bedroom with Michael while the others took a break and went to the kitchen to have soup and bread; then they would come back to be with him while we took a break to eat. Once again I was so grateful to have a fridge full of food so everyone could be easily fed. 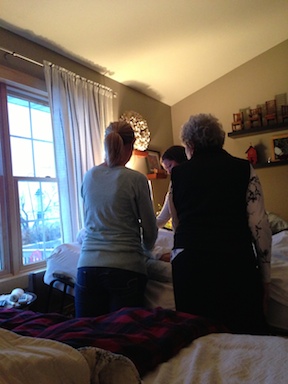 This picture is of Daphne, Buffy and Patty, basically pouring their love out on Michael. I don’t think I’ve ever met someone with a more devoted sister and daughters. It was a joy and privilege to see.

The weather on Sunday was a little warmer than it had been earlier in the week, but by the time the sun began to set, we had some freezing rain coming down. Buffy, Daphne and Jordan all had several hours of very cautious driving ahead of them, and reluctantly left right after dark. They said their tearful goodbyes to Michael with so many hugs and tender kisses, and even though it was unspoken, we all knew the end was near, and this would be the last time these lovely young women would see their father alive.

Sara spent a long time with her dad, massaging him with essential oils and tending to him so lovingly. She gives just about the best massage I’ve ever had, so I know Michael was feeling her love come through her gentle touch.

Mr. McBoy, Sharon and Chris’s oldest child and my oldest grandson, asked if he could spend the night to help take care of Grandpa. He’s only twelve, but he loved Michael deeply and wasn’t afraid of what he was seeing, so his parents agreed.

That night as we all got into our pajamas and prepared for the hours ahead, I started earnestly praying over and over for the Lord to take Michael soon. We couldn’t abide the thought of being without him, and we couldn’t stand the heartbreak of seeing him breathe so laboriously.

We set our alarms (in case we dropped off to sleep in our exhaustion) so that every hour on the hour, one of us got up to minister to Michael’s needs. I was sleeping 18 inches from him, Sharon was next to me, Sara was camped out on the carpeted floor, and Mr. McBoy was on the couch.

We had all thought that Michael would be taken home sometime on Sunday — it just seemed almost impossible that he could continue for much longer with such harrowing breathing, but as Sunday came to a close, it looked like Monday would be the day.

When I got up to care for Michael, each time I leaned down and kissed him, stroked his face gently and whispered in his ear, “Michael, you’re going to meet Jesus soon…we’re waiting with you, Michael. We will be here with you…it’s okay to go to Heaven now. I’ll be all right…the Lord will take care of me, and you and I will be together again soon. I’m waiting here with you, my dear husband. I love you. I love you. Thank you for being so good to me for thirty-three years. I love you.”

When Sharon got up at midnight to look after her dad, he was still with us. But we knew it wouldn’t be much longer…