Sobbing over the puffer fish

Yesterday my friend Ginny and I drove out to Cloquet, MN (pronounced clo-KAY) to the grad party of of our friend Carey’s son Isaac. Carey is a cook and baker extraordinaire, and I think I should just plan now to stop attending all future grad parties because no one else’s food is ever going to be like hers. Korean pulled pork with soft bib lettuce for wraps and a ginger and cilantro flavored slaw to top everything with. And different Korean relishes. And a dessert table that could have been from the kitchen of a queen. Isaac made a pavlova with rose water and strawberries, and Carey made a rustic apricot tart, a traditional chocolate/caramel/pecan turtle cake, a kind of thick lime custard pie with chopped nuts for the crust, drizzled with a raspberry coulee, and there was homemade lavender ice cream and many other sweet indulgences as well. There wasn’t a bratwurst or bowl of potato salad to be seen. And Isaac, who is a handsome, smart and loving young man, waited on people, cleared plates, fetched more desserts, filled coffee cups, and showed us a glimpse of the man he’s becoming.

Ginny and I had a nice visit too. We talked about Michael and the void he leaves. We talked about a request I bring before God every single day and wonder what His answer will be. We talked about death and old age and God’s grace for both, and I’m betting by now you wish you could have joined in such a lighthearted conversation. Ha.

When I got home I fixed dinner for women and beasts, got into my plaid flannel nightgown earlier than Sharon thinks I should, and clicked on the TV. I have been using the DVR I’ve had for years and never knew I had. I record the occasional old movie, James and Betty Robison’s “Life Today” show, anything Agatha Christie, and shows like “Nova” and “Nature” that often take my breath away.

Last night I happened upon a nature show that spotlighted the unusual mating habits of different creatures. I watched only one, because I was so overcome I had to switch it off when the show moved on to a certain kind of sea lion, whose mating rituals include spurting blood and deeply slashed skin and such violence I couldn’t handle it.

But I’d like to tell you about the mating habits of puffer fish. Are you familiar with puffer fish? I’d heard of them before, but what I saw last night had me gasping, laughing, marveling, and eventually, sobbing and thanking God out loud over and over.

Here’s what little I know. Apparently, off the coast of Japan, scuba divers have long been finding what have been dubbed small “crop circles” in the sand of the ocean floor. Here’s a picture of one: 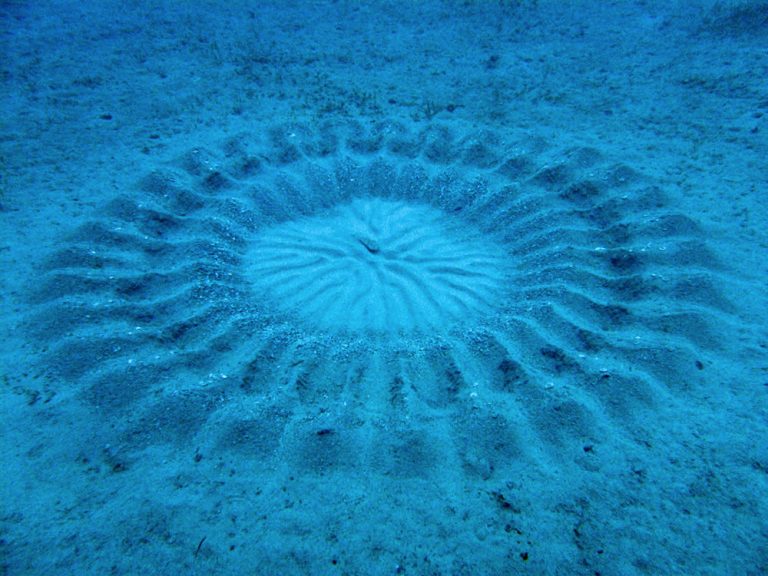 They decided to set up some underwater cameras to see how these “crop circles” were being formed, and lo, the builders turned out to be a newly discovered kind of small puffer fish.

A little male puffer fish begins work on his circle, hoping to attract a female. It takes him a week of  ’round-the-clock work to complete it, and somehow he knows the best times when the ocean currents won’t come along and smooth his masterpiece away. He swims close to the sandy ocean bottom and uses his little body as a broom, whisking his tail back and forth rapidly and carving trenches and valleys in a perfect circle. He uses his nose to push sand up on the mounded parts of the circle, and will even pick up sea shells with his mouth to deposit them on the top of these mounds, for decoration.

How does he get the circle so perfect? Where are his measuring stick and compass? Could a human being create so perfect a circle by simply using his/her hands without measuring tools?

Then when his circular nest is complete, the puffer fish swims aside and waits. A female puffer fish comes along and inspects the intricately constructed circles and decides which one is most suitable for her eggs. When Mr. Puffer sees that his nest has been chosen, he then gets to work smoothing out the center of the nest. All the grooves in the center are flattened, while Mrs. Puffer watches. She then swims to the center of the circle, lays her eggs, and Mr. Puffer comes and fertilizes them. He grabs her puffer cheek in his puffer lips, and they do a little puffer dance side by side, both sweeping the sand over the eggs to cover and protect them.

You have just got to watch this short video of the whole process.

When the puffer fish segment was over, I sat in my recliner in my living room and sobbed. “Whyyyyyy, Lord?” I thought. “Why have you made such an astounding world, with incredible creatures and magnificent beauty? Why do you blow our minds with the intricacies and delights and quirkiness of what you’ve made? Why have you created animals and fish and plants that go unseen for centuries, and you alone see them?”

I don’t know if I can explain this, but when I see little puffer fish doing what they are created to do, so beautifully, it makes me want to do what I’m created to do. This little film about the puffer fish made me think of another one I loved.

Did you see the footage of the new baby hippopotamus that was born a few weeks ago at the San Diego Zoo? Apparently hippos give birth under water, and newborns have to swim quickly to the surface to get some air, except they aren’t adept at swimming yet, since they’re only one second old when the need for oxygen arises. I watched this video of the little girl hippo, frantically and a bit inefficiently swimming toward her first gulp of air, and tears streamed.

Watch how the patient mother keeps gently, slowly, lifting her baby toward the surface with her huge nose.

Sometimes I just can’t wrap my mind around the things God has created. Perhaps like no other spiritual discipline, pondering the works of His hands inspires awe and worship in me, and I usually sob and praise at the same time. I keep saying through my tears while I’m honking into a Kleenex, “Lord! You do all things well! I am amazed at you! Thank you!” Considering God’s vast astronomical handiwork does the same thing in my soul. Awe. Tears. Praise.

Do you remember when Jesus taught His disciples about God’s wondrous ways in Luke, chapter 12? He told them to not be afraid of people, but to properly fear God. He told them how valuable they were to God, and that God already knew the number of their days. He told them to stop worrying and assured them that God would watch over them and provide in every way — what to say, where to go, and even that their food and clothing would be supplied. Do you remember how in this chapter Jesus encourages His friends to “consider the ravens” and “consider the lilies?” He was teaching His disciples that if God feeds the birds and clothes the flowers in more exquisite glory than Solomon’s robes, He would most certainly care for them.

Sometimes waves of grief wash over me, and I’m stunned again at the realization that Michael is gone, that I’ll never get to look into those big, kind eyes of his, that I’ll never again hear him speak my name with that familiar deep voice, will never touch his hands or smell his neck. But when I see things like the videos above, my delight, awe, and faith in Jesus increases, and I know I can make it through.

Maybe Jesus’ disciples were mightily encouraged when they heard Him say, “Consider the ravens” and “consider the lilies,” but I am encouraged and strengthened when I hear Jesus whisper to my heart, “Julie, consider the puffer fish! Consider the hippos!”