I had a busy-ish Friday today, and am glad to now be home, sitting in (you guessed it) my flannel plaid nightgown, feet up in the living room’s leather recliner, with Rick Steves in the background on the television, telling me about Liechtenstein, San Marino, Vatican City and Monaco. Oh, I have been bitten by the travel bug, and also have books on my nightstand that contribute to the resulting virus. Travelitis, it’s called. I want to get on a plane and fly over a large body of water. More on that later.

This morning one of my Fosters and I were out the door fairly early, because it was time for her yearly physical exam. Then we went to the passport application place so she could apply for a passport, as part of our upcoming cruise along the water of the Inside Passage will eventually have a stop in a foreign country — British Colombia, Canada. Then we drove to her optometrist’s office so a new pair of lenses could be put in her frames, except they couldn’t get the new lenses in. So I’ll take them myself to the optical lab next week so they can be filed down to fit into her frames. We drove home by noon and I closed the windows in the house and turned on the central air. It wasn’t terribly hot today, but I’m getting more sensitive to mugginess as I age, and I needed the air to be drier than it was. I cannot abide much water in the air. Unless it’s rain, then I’m good.

Then my friend Su came over and we stretched. Yes. Both of us are feeling the need to do something proactive for our unlimberness, and we thought doing a video together would help us want to do a video at all. It really is remarkable how much the muscles appreciate being lengthened. Mine were telling me over and over, “THANK YOU! IT’S ABOUT TIME! AAAAHH!”

After we completed the DVD, we enjoyed Cobb salads for lunch, with sliced organic chicken breasts, a pile of dark organic greens, sliced avocados, hard boiled eggs, tomatoes, and home made blue cheese dressing my friend Carey made. And we had glasses of ice water. It was nice to sit together and look out over the sapphire blue waters of Lake Superior while talking about our travelitis. I brought out a couple of books I bought recently on travel to Scotland and Ireland, for “creaky travelers,” i.e. those who are mobile but not agile. I don’t know if my replaced right knee has forever rendered me a creaky traveler or if I’ll get off that special list someday. But the books were fantastic and had really good suggestions for those who want to travel without walking many miles or climbing any peaks.

On Tuesday morning the annual summer Bible study I’ve hosted in my home for thirteen years began. There are eleven of us this year, and we’ll be going through Priscilla Shirer’s study called Breathe. 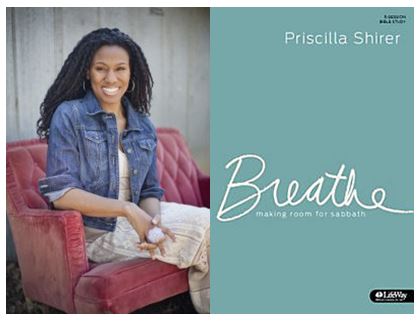 It’s about honoring the Sabbath (something we western Christians have sort of forgotten to do, even though it really is one of the Ten Commandments) and finding/creating margin in our lives.

I have been intrigued and convicted for a long time about this promise in Isaiah 58:13-14 about the Sabbath:

“ ‘If you keep your feet from breaking the Sabbath
and from doing as you please on my holy day,
if you call the Sabbath a delight
and the Lord’s holy day honorable,
and if you honor it by not going your own way
and not doing as you please or speaking idle words,
then you will find your joy in the Lord,
and I will cause you to ride in triumph on the heights of the land
and to feast on the inheritance of your father Jacob.’
For the mouth of the LORD has spoken.”

I would certainly love for the Lord to cause me to ride in triumph. And day by day my desire to honor God and delight in Him grows.

Tomorrow will be a paperwork day, a bill paying day, a tidying up day, and a laundry folding day. Then on Sunday my two Fosters and I will drive to Madeline Island to spend some time with Sharon, Chris and their four littles. Except their oldest little isn’t little at all. He’s thirteen and the size of most adult men. Their family is vacationing for a few days.

Are you familiar with the Apostle Islands off the coast of northern Wisconsin? Madeline Island is the largest of the Apostles, and we’ll drive the car onto a ferry, which will transport us across the water of Lake Superior to the Island. Here’s a map: 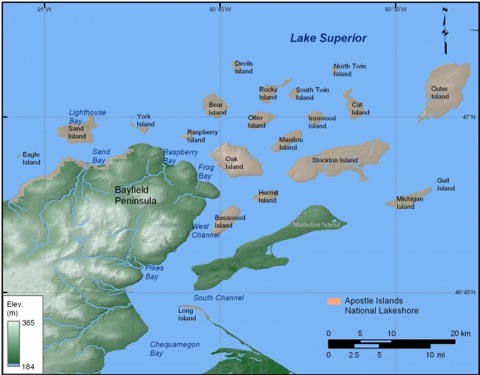 There’s a beautiful, protected, curved bay on the eastern side of Madeline, called Big Bay. Clearly, a man named that bay. I mean no sexism or disrespect, but can you imagine a woman naming a truly tranquil, clear, shallow, gorgeous beach “Big Bay?”

Michael and I visited Big Bay Beach a number of times, and I was always struck by the clarity of the water. You can walk a quarter mile out in Lake Superior and it’s still only about chest high. You can look down and see the wrinkles on your toes and the individual grains of sand. And the taste of the water is the best in the world, in my opinion. Not that I’ve tasted all the waters of the world, but I can’t imagine Parisian or Tunisian or Siberian water could be better than Lake Superior water. I might be slightly biased by my geographical location, but I would invite all who don’t drink Lake Superior water to come for a visit and just try it.

Speaking of water and swimming, here’s an old photo I just saw for the first time last week. It was taken in San Clemente, California, when my friends and I were twelve and a half or possibly thirteen years old. We were in Girl Scouts and this was one of our scouting trips. From left to right: me, my friend of fifty-one years, Denel, Vicki, and Ann. 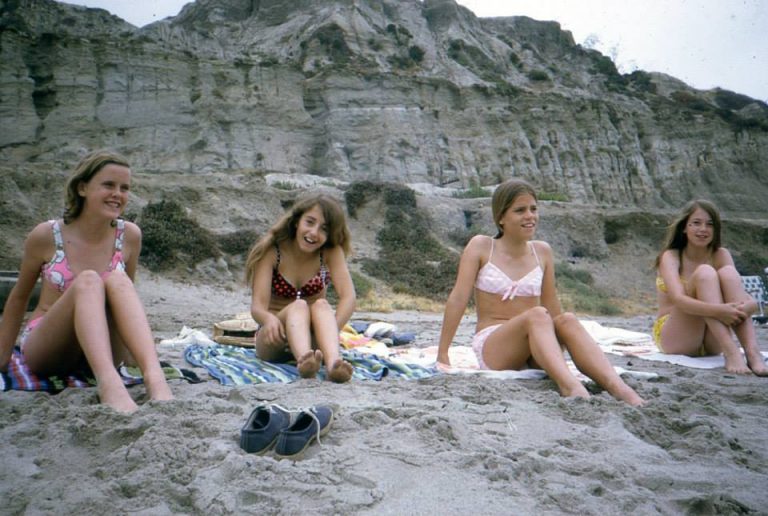 Those were the best of times, they were the worst of times. I yearn for them, and I’m glad they’re gone.

In other news, I had the first urinary tract infection of my life recently, and I had to buy a new computer. Completely unrelated topics, but I’m just going with what comes to mind, friends. I thought I had a UTI in late May because I had the typical symptoms. I went in right away for a urinalysis and my doctor called me the next day with the results: negative. I grew more puzzled and distressed over the next TWENTY DAYS as my symptoms worsened, the pain was almost enough to warrant a towel to bite on, and I was peeing every eight to twelve minutes. I timed it. Even though my results were negative I popped cranberry pills and glugged down gallons of water and lemon and vitamins for days. On Day 20 I started having back and side pain that made me writhe. I tried not to cry. I texted my daughter Carolyn and asked her what a UTI felt like since she’s had one, and when I told her I thought I had kidney pain, she texted back, “Go to Urgent Care now. They’re open another forty minutes.” So I did. I practically threw myself in the car and drove to Urgent Care, rocking back and forth at the stop lights, where they were almost ready to close and thankfully no one else was waiting. I peed in a cup and within five minutes the doctor told me I had a bad UTI (lots of blood cells) that had obviously become systemic and spread to my left kidney. I cried, “Well thank God I finally know what this is!” I asked the doctor about the negative urinalysis I’d had weeks before and she said it happens unfortunately, especially if someone is drinking lots of water and diluting their urine, which I was. Now I know not to trust a negative UA, but I am hoping this never, ever happens again. I was doing deep breathing and stifling sobs when I got home from Urgent Care, the kidney pain was so bad. I grabbed a glass of water and took my first pill and prayed that it would work quickly and not cause any other unpleasant side effects, which antibiotics sometimes do. After two pills my kidney pain was gone, and after a week on my prescription I was back to normal. I have been literally praising the Lord, out loud, every single time I go potty now, because it’s such a blessing to have no eye-bulging, nail-digging pain.

Lastly, we have some matching drinking glasses now. Sara just came in with a gift for her 57 year-old mama, who really should have a set of matching glasses at this stage of her life. If you were to open our kitchen glass cupboard, you’d see a motley collection of jelly jars, little kids’ plastic drinking glasses, some prehistoric but intact Tupperware tumblers, and one or two leftovers from cobalt blue sets long ago. I now have eight tall, clear, wide, sturdy drinking glasses, and I couldn’t be more delighted. The next time I have company for dinner, everyone will have a matching water glass.

That’s all for today. If your head is spinning from so much randomness, perhaps you could go take a sip of water and lay down for a while. 🙂