A while back when I realized that my sense of smell was gradually returning, I started compulsively putting items to my nose and inhaling deeply. Being 100% anosmic for several months reminded me of how much I take for granted. Can you smell a flower? Gently touch a grain of sand and feel it beneath your finger? Pee without assistance? See color? Brush your own teeth? Kiss a loved one? Drink freely of cold, clean water? If you can, you have some major joys to thank God for today.

A couple of years ago when I lost my sense of smell from a sinus infection and was told by an ear, nose and throat surgeon that it would most certainly never return, I was bummed. No matter how pungent something was, I could put it right to my nose and still couldn’t smell it. Everything was different then. Water didn’t taste the same, I was always asking people if my house smelled funky, I constantly tried to smell flowers even though I knew I couldn’t, and I kept asking God to restore my sense of smell.

After almost a year of having no olfactory capacity, I was thrilled when I began to faintly perceive scents again. I still can’t smell things like I used to, but if I had to guess I’d say about 30-40% of my sense of smell has been restored to me. Yay! I can smell things that are very fragrant if I put them close enough to my nose. I can’t smell things if they’re just a mild odor in the air. So if your house smells like it needs a good cleaning, you can still have me over and I won’t know it.

When I realized that there were some things I could smell again, of course I went around holding things to my nose and inhaling, thanking God for fragrance and the ability to enjoy it. One of the things I smelled was the old cannisters of Play-Doh I had kept for years for our grandchildren. The Play-doh did not smell good. It was too old and probably had a zagrillion teeming bacteria in each lump from years of little hands playing with it. So I tossed the old Play-Doh and bought some new. And I took the colorful lids off and put the new blobs of Play-Doh to my nose and deeply inhaled…aaaaahhhh…that old familiar smell was faint, but just the same as I remember from when I was young. Isn’t it funny how smells are so tied to our memories? I love how our brains work. Most of the time.

So eight-year old Clara came over to spend some time with Grandma recently and I pulled out the new, cleaner smelling and less germy Play-Doh. I sat at the table with her and we chatted as she sculpted.

Clara has gotten a few of her permanent teeth in and she’s looking older each time I see her. She’s such a beautiful blend of her mama and her daddy. 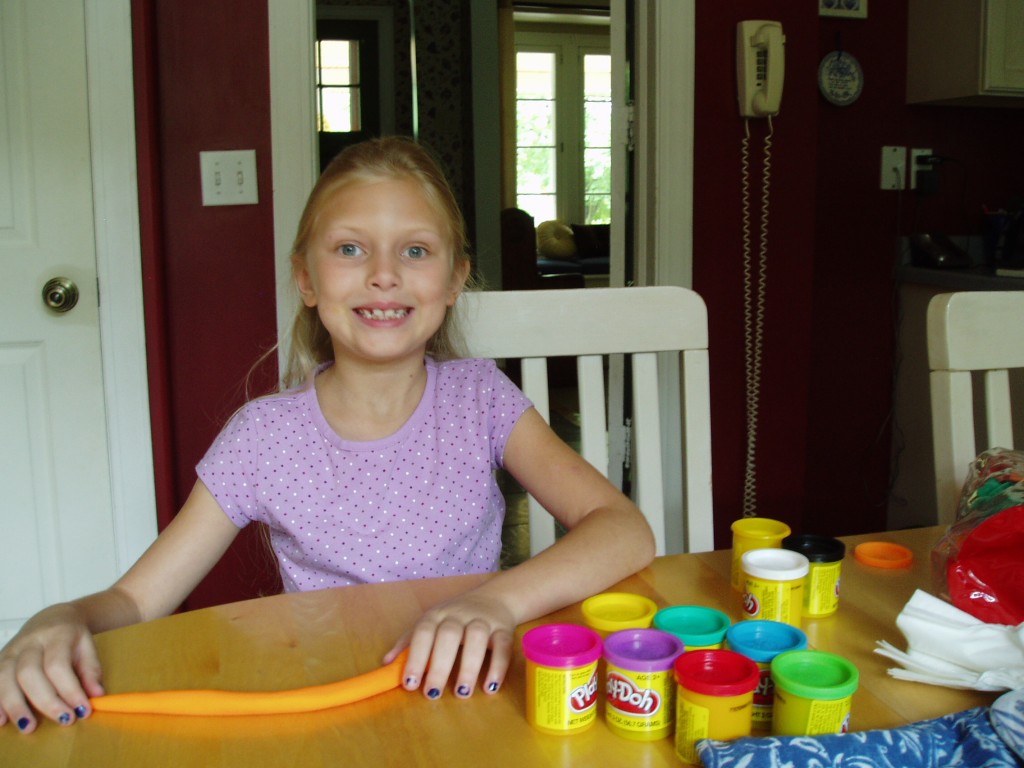 Here’s one of Clara’s creations that I had to zip my lips about. I hate snakes or any representation of snakes. But who doesn’t roll out a length of Play-Doh to make a snake when they start to play? So I told Clara what a nice job she had done on the snake and then cheerily suggested that she make something else. 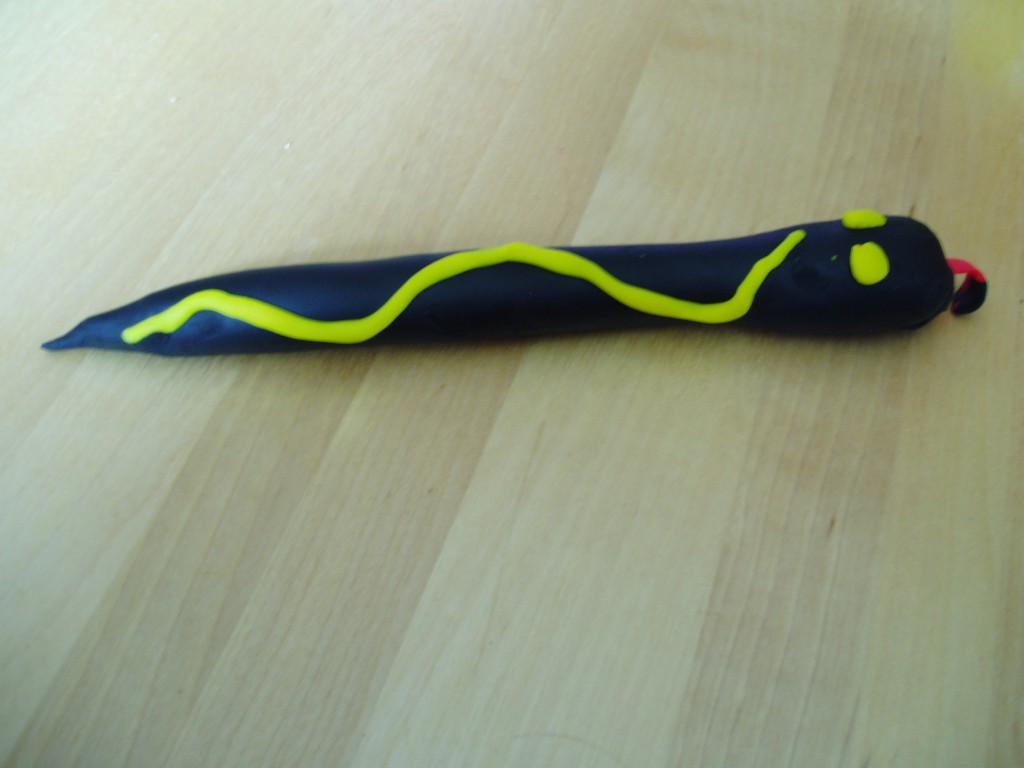 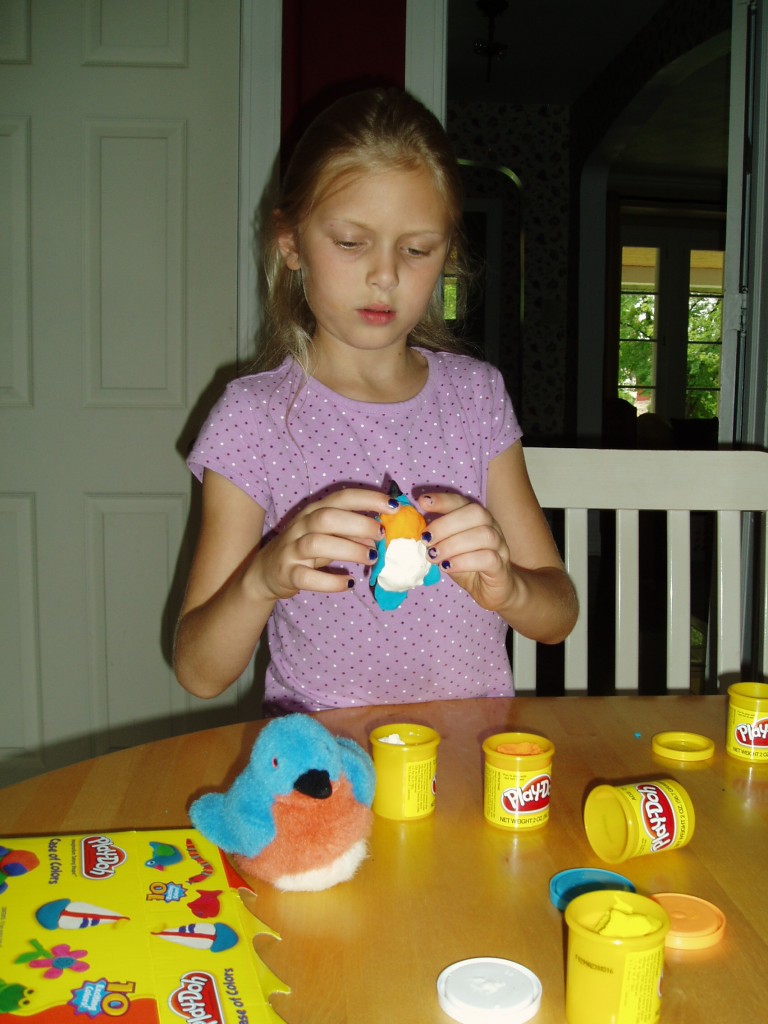 Here’s Play-Doh Eddy next to the real singing Eddy: 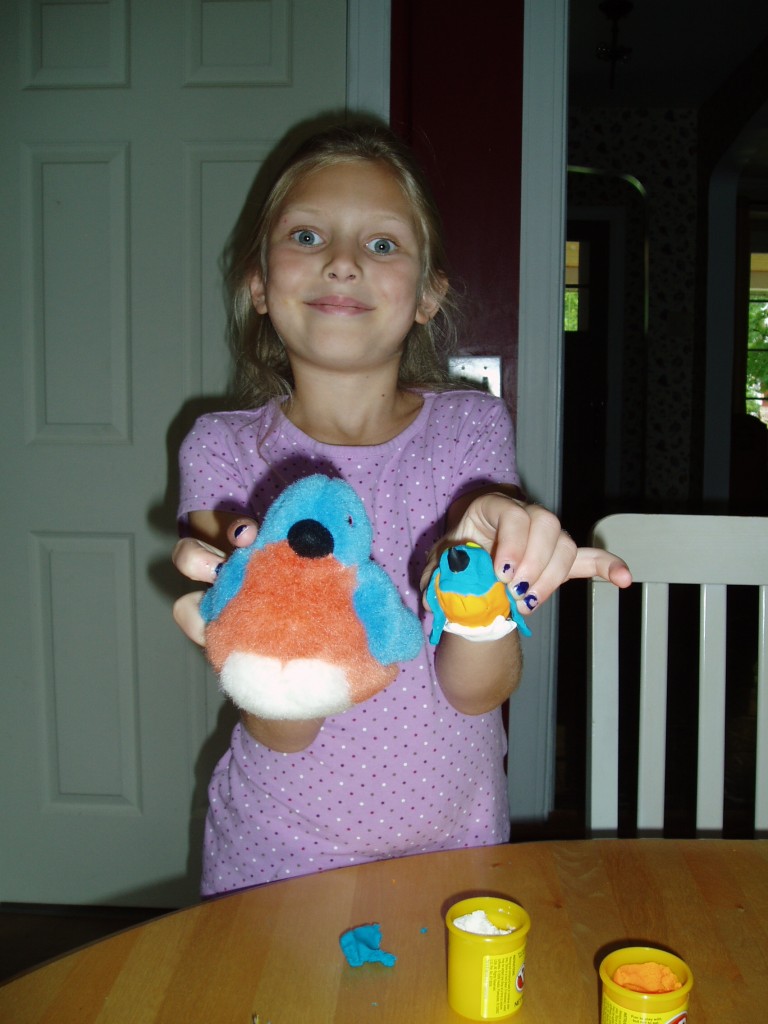 When I asked Clara what she was going to make next she said casually, “I think I’ll make a skeleton of a Tyrannosaurus Rex.” 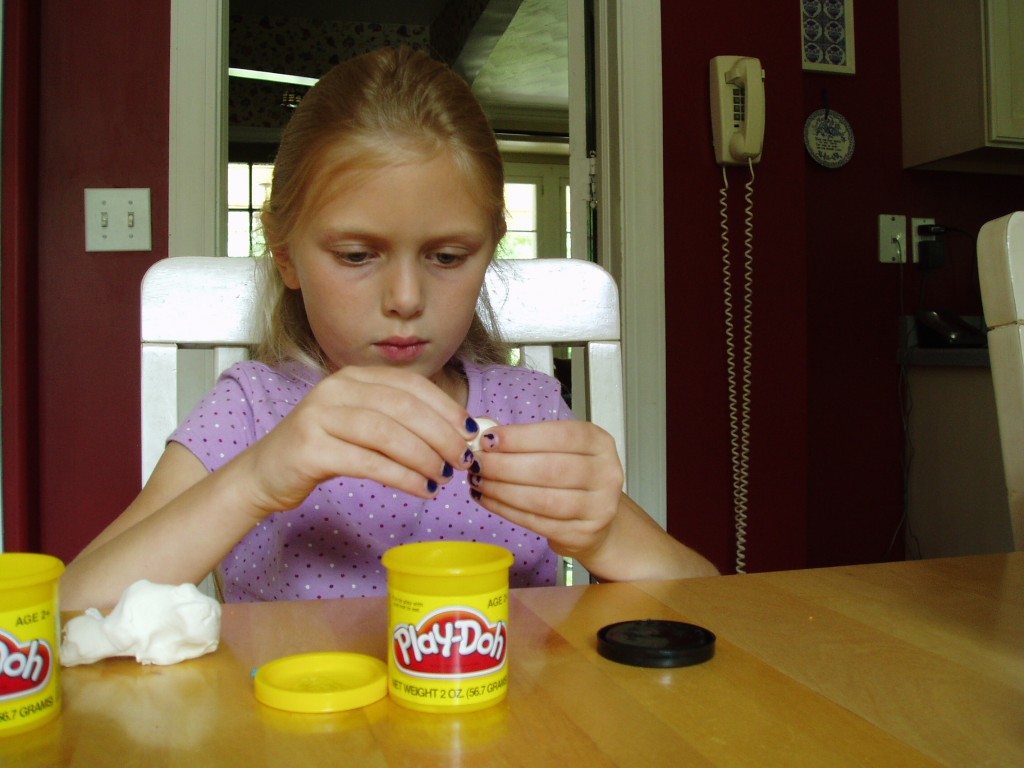 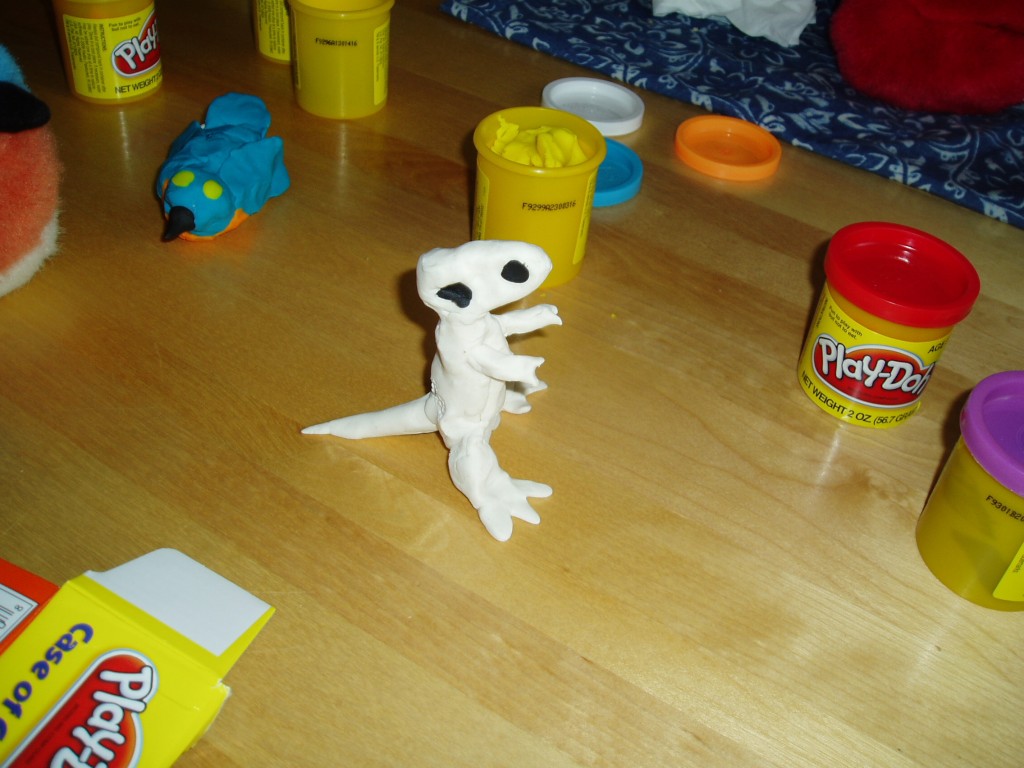 Clara asked me if I would like to make something out of Play-Doh with her, and of course I jumped at the chance. I considered making a bust of Winston Churchill or a galloping wild pony on the shores of Chincoteague with the ocean wind lifting its mane and tail, but decided on something more meaningful, more evocative of what life is all about for me. 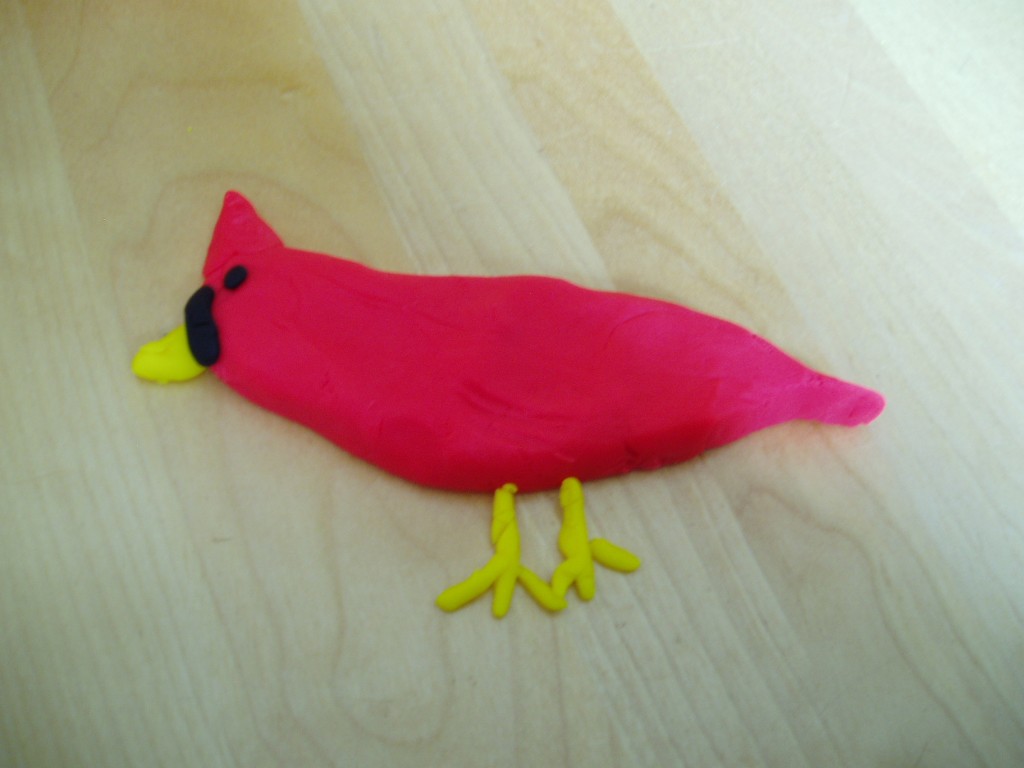 If you don’t know the story you can read about it by clicking here. The names and dates have been changed to protect the innocent, but it’s a true story.

Today I’m so thankful I can smell Play-Doh. And watch my grandchildren play. And experience their love. And that there’s a cool breeze blowing in my office window right now, instead of the hot, humid air that has been hanging around for so long.

What are you thankful for today?