We have two dogs — seven year-old Edith Elaine Bubbleloo (we call her Edith, and occasionally, Schmeedith Needle), and three year-old Mildred Virginia Sizzlelorum (we call her Millie.) They’re both Miniature German Schnauzers, and you can read here how different they are from each other, and also how we are pretty much their human slaves.

All the Schnauzer literature says the same things about the traits of these stout little dogs. They’re very bright and inquisitive, very lively, very loyal and attached to their owners, have extremely sensitive noses and were used as “ratters” in Germany, their supposed land of origin, and they are very barky. Veeerrry barky. I just looked up the word barky in my online dictionary and here’s the definition: “the word barky could not be found.” I tried another online dictionary and it said that the word barky means rough and not smooth like the bark on a tree. That is not what I’m referring to when I say Edith and Millie are barky.

Both dogs are hyper-vigilant about anything going on outside. They station themselves near any window to stand motionless for long periods of time, watching carefully for any sign of movement. If leaves blow in the yard, their ears are instantly up and they’re alert to what else might be lurking out there. If squirrels dash up the trees at the back of the yard, the Schnauzers begin to vibrate slightly as they watch. But if a person jogs by in the street, this will finally set them to barking. If someone walks by with a dog on a leash, the canine hysteria begins. But if a trio of deer ambles through the yard, oh my…then the Schnauzer Shrieking commences, and Edith and Millie won’t stop their ear-splitting and barky behavior until all moving objects have disappeared from their fields of vision.

We’ve tried many things to stop them from barking so much. A dog trainer showed us how to try violently jerking back on choke collars in “a quick yet not cruel” motion as soon as they start up. This requires that we be within four inches of them at all times, and tends to hinder us from cooking meals, cleaning house, talking on the phone, driving the car, taking a bath, going to the bathroom, etc.

We’ve also tried throwing small chains at them when they bark. My dear friend Carole learned this from someone and she took me to a hardware store and had the clerk make a circlet of five chandelier chain rings for me. She showed me how when the dogs are looking at something moving outside and start barking, you quickly and accurately throw the chain circle at them and they’re startled, thinking that God Himself has intervened to put a stop to their barking. This method also requires that you be near the dogs at all times, because you certainly can’t run from the second floor of the house as soon as you hear a bark, down the stairs to grab the circle of chain links and hope to toss it so it lands directly between their shoulder blades just as they’re barking. My friend emphasized that for this method to be effective, the dogs can’t know it’s the owner throwing the chain at them. Use your imagination and you can probably tell how often we currently throw chandelier chains at our dogs when they bark.

We have also tried just keeping the den window shades closed so they couldn’t see what was going on outside, but we missed the already scarce daylight and started having symptoms of Vitamin D deficiency and developing huge pupils and amazing night vision. This also didn’t address their views from the kitchen French door that looks out over Birdinal Creek in our back yard, or our bedroom windows on the second floor, or the living room windows, which have no shades.

We have also tried yelling at the dogs. “Be quiet! STOP BARKING!” we holler at them when they start the incessant barking. Or my favorite tactic that Michael uses — when they’re in the back yard shriek-barking across the creek at deer or squirrels — he says loudly to the dogs (from inside the house) “Ssshhh!” You would have to see him do this to get how funny it is.

Yelling at them to knock it off sometimes works for a few seconds, but their Schnauzer instinct dominates and they’re back at it again. Our daughter Sharon nicely reminds us that we’re not the most effective dog owners and that The Dog Whisperer would have much to say about the way we’ve allowed Edith and Millie to behave.

Well, if you’ve read this far in this post, you can congratulate yourself for possessing amazing concentration skills. Nothing really exciting is going on this morning. 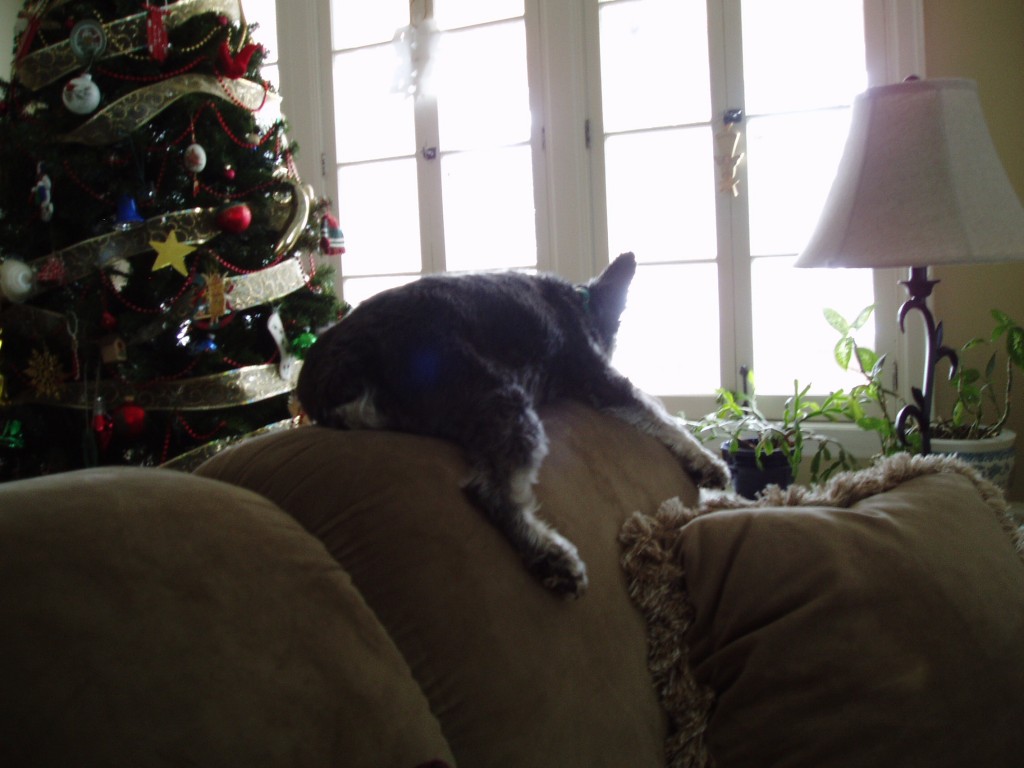 But here’s a recent photo of Edith on the back of our living room couch, in stealth mode. She looks relaxed with her legs draped over the sides like that, but she’s really just waiting….waiting for the slightest sign of life outside.

If you watch her when she’s like this, the only thing you’ll see is her quirkily twitching Schnauzer eyebrows as her eyes scan the outside world for something to announce.

Minutes later, a UPS truck pulls up across the street and our little Schnauzer Sentry is ready to tell the world. 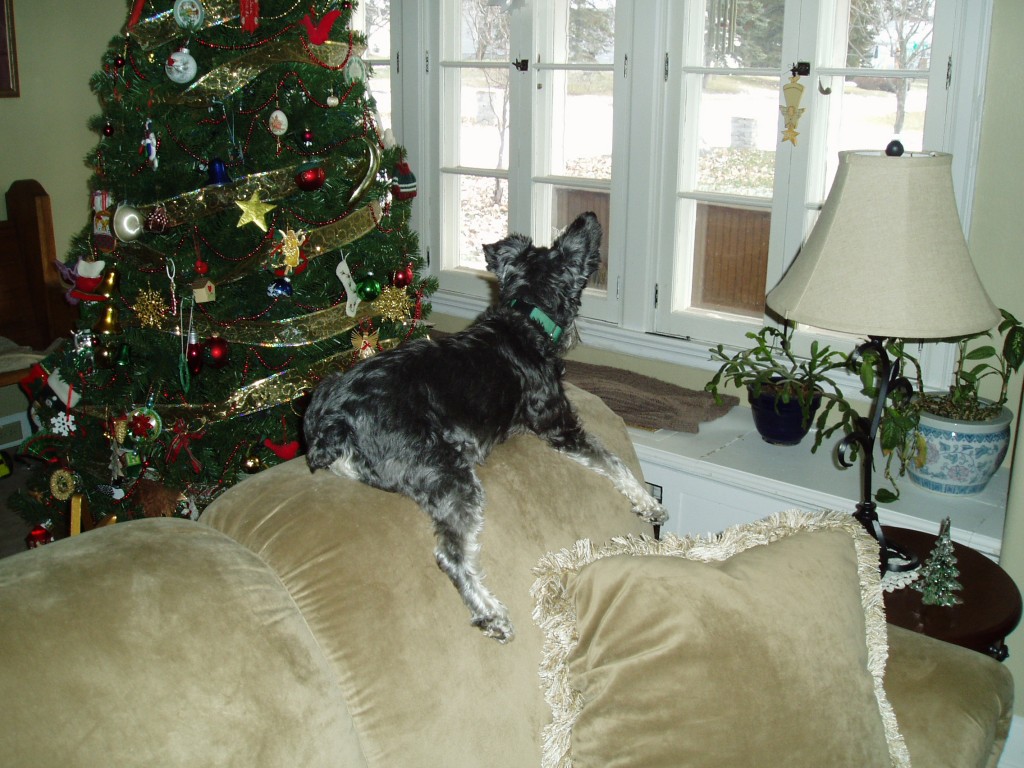 In this photo she hasn’t started up yet. She has only lifted her head and a low rumble in her chest has sounded.

But the shrieking and barking and hysteria will most certainly ensue, and we will either be looking for a small circlet of chandelier chain links to throw at her shoulder blades without her noticing it was us, or more likely, we’ll just let her bark. And bark.

Because we know that basically, the Schnauzer Sentries are just trying to protect us from evil. They’re just doing their job.

At least that’s what really bad dog owners like us keep telling ourselves.